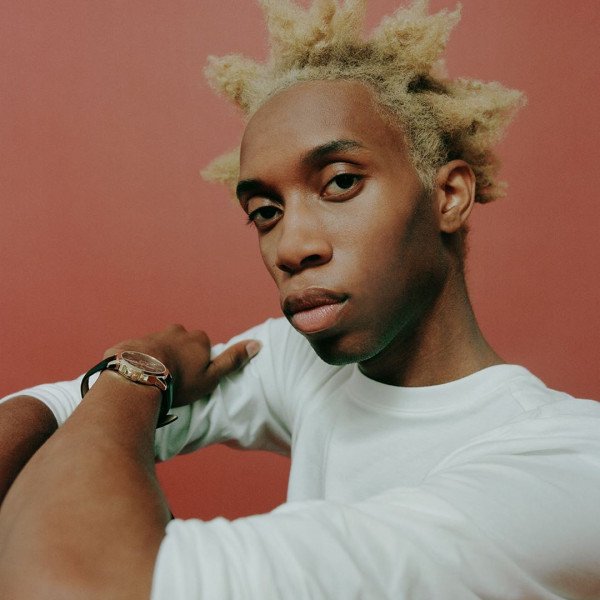 To engage with the internet regularly is to have found a friend in “Parklynn.” You may not recognize the name, but you certainly would the face—or the swinging wig and high kicks—of her creator, New York–Texan dancer Parker Kit Hill. In the description of a Parklynn compilation video, a fan writes, “I only uploaded this so I could watch it on my TV,” which was coincidentally exactly where Kit Hill would soon be. The 24-year-old Vine alum has scored spots on Broad City and is pursuing acting, while his style aptitude secures his partnerships with megabrands Target and Farfetch. As such, prepare for the social media sensation to be coming soon to a much bigger small screen near you, because with or without Parklynn, Kit Hill is ready to shimmy into the big leagues.

You are such a social media veteran; where did your relationship with these various platforms start?

“I was a freshman in Texas when I got Tumblr, and I was just extremely interested in everything on the internet because I was seeing the world…and it didn’t look like Texas. Then all these micro social media apps came out, and on one of them I had a huge following—literally the largest following on the app. It was like TikTok, just with moving images. Then when Vine came out, I was one of the first to download it—then it went mainstream, and I was getting hundreds of thousands of followers over the span of a week.

“When I went to ballet school in New York, everything was accelerating, and I had to pick one, and dance just wasn’t sustainable for me. It was like, What if I break my leg? or After 10 years in a company, where does that leave me? Soon after the wig came into the picture—Brazil loved the wig, they think I am that person—I stopped dancing completely. I felt like myself finally. My life had been so regimented. I was never going to a party or a friend’s house, I was always going to dance. And the only way I could express myself was with my shoes or my bag. I had to tell my parents they had to trust in my process, and I’m still in this process.”

Financially, when did the doors start opening?

“Well, I was in a crazy spot, but no one knew how to monetize it—because Vine was never monetized. When I first moved to New York, I was living off the $20 a week from my parents for several years. I knew things with social media had to change, because people weren’t going to keep doing all this content for free.”

“I was a freshman in Texas when I got Tumblr, and I was just extremely interested in everything on the internet because I was seeing the world...and it didn’t look like Texas.”

At the time, the faces of Vine were the Shawn Mendes type, and you were this queer Black kid who could dance, who found a similar kind of celebrity. How did you navigate that tokenization?

“Do you remember how they had those internet tours? It was boys traveling the country so they could meet their female fans. So I went, and it was Cameron Dallas, Shawn Mendes—little old Shawn Mendes, who was skinny and shy and performing a capella, I remember being the only one thinking that he was the thing. It’s funny I was the only person of color, only gay person, and people were like, What are you doing here? I know I will always be a token until things change, and I’ve accepted that. I think things are changing and normalizing, but there are so many levels to it.”

How strange is it for you to see history repeating with TikTok—with the cute white boys rising to the top again?

“That’s what it is. They’re living in their privilege. All they have to do is turn on the camera and smile. I think time will tell. When I see this happening, it’s like, Here we go again. But now they’re going to be thriving. Give it two years, and where will they be? But I think now it’s a different form of social media in general. They understand the game of it now because people have been practicing so much—but I hope people are making the right decisions. But if you look at TikTok versus Instagram followers, those numbers are very different. I do think the future of social media is that everything is going to merge together, and then we will truly be able to pinpoint everything.”

“It’s funny I was the only person of color, only gay person, and people were like, What are you doing here? ”

Do you want to end up in the traditional entertainment space?

“Yes. I’m tired of being on phones, I want to be on television. I would love to be acting and creating characters that are bigger than me. I don’t want to be niche anymore, I want to transition to be more open. And I’ve learned how big the industry is and how many layers there are. And acting isn’t easy, I’ve known that from the jump—you need to study and devote time—but I want to do it my way. I’m trying to analyze film and all forms of media, what works and doesn’t. I want to have a real foundation.

“But my ideal project, if I could do it tomorrow, I would love to do something based around fashion and breaking down taste. I don’t think people realize there are so many things out there. And if you like it, you like it. It doesn’t matter. Fashion has changed because people are getting dressed for Instagram. People buy what looks good on everybody else, and I’m very anti- that.”

You have so much fashion credibility, and that’s rare for a social media star. How did you sidestep into that scene?

“I’m big on aesthetics, and when I started shooting editorials, I would talk to stylists to learn, and I would be building micro-relationships with brands. Fashion is so important to me because it’s the only way you can speak without saying anything—it’s body language. I can express how I feel from what I’m [wearing] today.”

“Fashion is so important to me because it’s the only way you can speak without saying anything—it’s body language.”

Is getting dressed ever political for you?

“I’m just myself. One day I want to wear a dress or a skirt, and it’s not because I’m trying to be a woman, it’s just because I like that skirt. I want to wear what works for my body. And men’s clothes are so boring, it’s so square—it’s like we shouldn’t be boxed into one gender for clothing, that makes no sense to me. You should be able to explore everything. And it should be normal to wear nail polish or makeup for men and it not be ‘gay.’ Like you’re just customizing yourself, you’re customizing your avatar.

Have you seen the industry shift toward inclusion?

“It’s pick-and-choose inclusion right now. There’s a whole market—like, where is the male plus size, you know? When it comes to all the stuff that’s going on right now, I’m seeing a shift towards Black content, but I just want it to not just be right now. The fashion world is restructuring right now, and I think it’s genuine, but we aren’t going to see immediate change, it’s just not going to happen now. There are too many systems in place.”