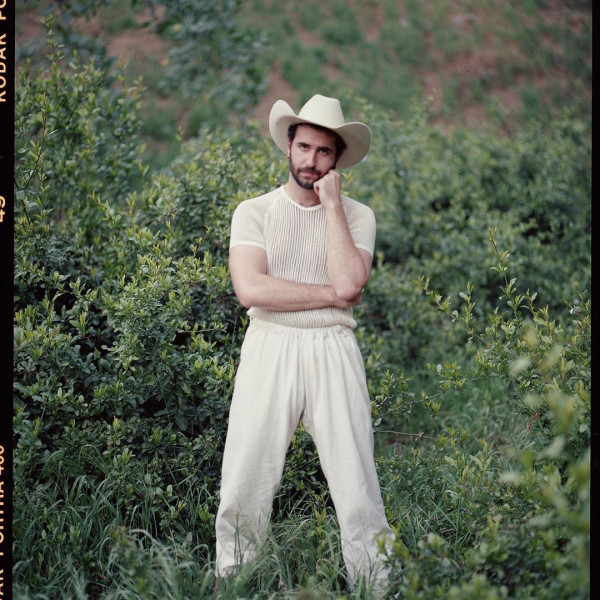 Jordan Firstman direct-messages Reese Witherspoon. But that’s not all. The 28-year-old writer/producer/comedian also buries the lede. Firstman will exalt his love for Laura Dern long before mentioning he wrote the Indie Spirit Awards’ viral segment dedicated to the actress. He unravels his overarching interaction with Instagram well prior to admitting his follow count shot from 15,000 to over 20 times that number in just three months. He expresses disbelief at his famous fans (read: Ariana Grande and Jennifer Aniston), revealing only when pressed that he’s quietly formed friendships with each of them. Firstman’s unshakeable humility is exasperating, albeit on-brand. His ability to breathe life into daily objects, social media trends, or universal grievances with impression speaks of someone who connects best to the everyman—although Jordan Firstman himself is anything but.

How have the people close to you reacted to your insane rise? Is it “Wow, look at you go”?

“I think how extreme it happened was shocking to a lot of people in my life. It wasn’t just a viral thing, it was like in one week all these hugely famous pop stars were just there all of a sudden. So the celebrity aspect had people in my life saying, ‘What is happening?’ I was just riding the wave, feeding off the energy. I’ve seen people have moments before, but usually they’re out in the world and experience the moment with others. But I was experiencing my first ‘moment’ completely alone. I’d just gotten out of a relationship, and I don’t have a roommate, so I was literally alone and experiencing this huge thing.”

What do you think suddenly triggered the insane flood of fans?

“Honestly, the first ‘season’ of impressions—from the second I posted it—did so well. One day everyone who has ever been on a CW show followed me, and then when Ariana reposted them, that’s when the biggest shift happened. I was freaking out. Her fans are really intense, I was almost like, Oh no, oh no. But I remember having this thought like, OK, things are going to shift right now. Then it was Katy Perry, Chrissy Teigen. Then Reese Witherspoon and Sarah Jessica Parker, Jennifer Aniston. It just kept changing. I have so many mixed feelings about the internet, I think it’s impossible to say you like the internet or don’t like the internet because it’s only an extension of us—a complete extension of humanity. So anything we experience in society, the internet is a mirror of that. But I started to see it as this expansive opportunity, and I was in the stage of the real fun part of the internet that feels like a circus. And the energy that I was receiving was kind of in me, I was just letting it out through more impressions.”

“I’ve seen people have moments before, but usually they’re out in the world and experience the moment with others. But I was experiencing my first ‘moment’ completely alone.”

But why impressions at all? How did you conceptualize that first “season”?

It’s unreal. How do you think your online creativity is informed by or intersects with your work as a screenwriter?

“I think these impressions are a distillation of my creative voice. I’ve always had a strong point of view. And I’ve been in writers’ rooms for comedy shows that are just pitching jokes, so I know a lot about joke structure on top of story structure. A lot of them kind of have a three-act story structure, which I think makes them so engaging. Like you’re getting a full story in a minute. When I started doing inanimate objects, I was like, Wow, I can make these really universal. Because everyone has to do dishes, and everyone hates it. And I can make it my own, whether it be slutty or silly. Now that’s my goal: to express an unrealized truth in a funny way.”

Is that something you want to translate into your work?

“Oh, it’s been a huge, huge lesson for me, which I want to continue. My previous work is a little heavy-hearted. I see the corruption or hypocrisy in the world, and these are things that drive me artistically, but it’s my work that has been more negative, and I just thought that was my tone. Then, through this I’ve learned it doesn’t have to be.”

Do you have to contend with any kind of backlash? Just from the sheer scale of your platform?

“I got to say, I had way more haters when I had 10,000 followers than I do now. It’s weird. I used to really draw haters. People would say, ‘You’re f**king ugly, you should die.’ But now I think it’s really hard to publicly stand against joy, because what I’m doing is so clearly from a place of light. I’m sure there are a lot of people on text threads making fun of me, especially in the comedy world. But it’s like, what, are you going to comment publicly that you’re against joy? But I think you open yourself up to more criticism when you’re criticizing others. And because I am keeping it positive, it just breeds a different type of person that ends up on my page.”

I want to pivot slightly, because I have to ask about Laura Dern:

“Yeah, you do. So one night in January, I had broken up with my boyfriend of four years, and then two days later the show I created and had been working on for four years was canceled by the network with no explanation. It was like my entire life fell apart in two days. Then a week later was the Indie Spirit Awards, which was one of the all-time highest moments of my life and the beginning of this joy progression. Seeing the way that song and the Gay Men’s Choir of L.A. and her response to it was unadulterated joy—that coming together, and it came together so seamlessly. I was in the writers’ room for the Indie Spirit Awards, I had the idea, and Aubrey Plaza was like, ‘Go do it.’ It felt like the universe was giving me an ‘it’s going to be OK.’ It is crazy that my year started with that, and now I’m experiencing this viral moment. Something energetically is happening, and I don’t want to jinx it.”

“I’m sure there are a lot of people on text threads making fun of me, especially in the comedy world. But it’s like, what, are you going to comment publicly that you’re against joy?”

I don’t want you to jinx it by revealing too much, but is there a strategy for all of this, or is it just entirely organic?

“It’s both! I was already trying to make shows, so this happening is going to make it easier. So the next phase of this, I want to keep making people laugh on the internet. I love it. I love communicating with people. But I’m also trying to make substantial art like films and TV. What I’m hoping is that using my voice will make it easier for the industry to trust me now. Because whenever I’d try to make something, I would just hit these walls. They just don’t trust people like me, they mostly trust 55-year-old white men. And I get it, because there’s a lot of money that’s being invested, and young creators represent a world that they’re scared of losing. It’s a little bit ‘Make America Great Again,’ and they’re also scared that we will f**k it up, production-wise. I hope that changes, but the industry is so difficult to penetrate.”

Do you think now entertainment needs to see viral success to take you seriously as a creator?

“I don’t think it hurts, because numbers don’t lie. But then there are people with millions of viewers who have a hard time breaking in, too, because what they do is so specific to the internet. But for me, it’s easier now that I have the [entertainment] experience, but this is really wild, and I can’t explain it other than I somehow tapped into something when I was ready and all the pieces could be put together. I’m at a point now, too, that I know how to navigate it, and I’ve grown up enough emotionally that I can deal with the intensity.

“If I was 21 and had this fan base, I would freak out about not losing them. But I see what careers are now. There’s no one who has had a consistent moment. People like Jennifer Lawrence, who you never thought would dip. Knowing success isn’t linear has helped me a lot. And even if I dip and there are no more Reese Witherspoons to follow me, or Sarah Jessica Parkers or Jennifer Anistons. I’m alive because of these women, and now I’m DMing them. It’s really crazy. For a gay boy that so much of my identity is based on these women that you grow up worshipping, it’s so wild for them to be watching and listening to what I have to say.”

And that doesn’t up the pressure? Have you kind of had to mitigate any mental health stressors?

“That’s the whole thing; they’re following me because they saw something in me they liked, so I’m not going to adjust for their approval, because they already like it. But with any high there are lows, and it’s learning to move through them. It’s literally energetic. This is why I respect pop stars so much, because they have to navigate all of this energy flying at you every day, from hundreds of thousands of people, onstage. The internet is a less visceral experience because it’s not quite human, but after the surge you just have to keep going, keep being creative. That’s just what you have to do.”