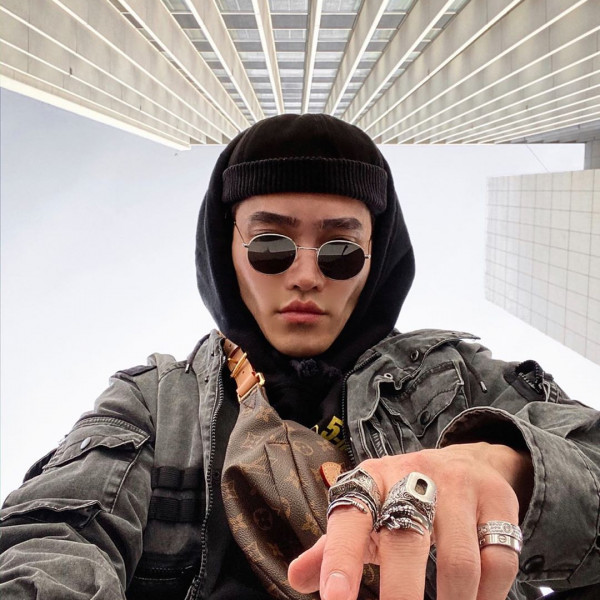 Any influencer could tell you there’s no one way to stand out in a (virtual) crowd, but for Edward Zo, the rise to the top of our feeds wasn’t without a few pit stops. When the actor and musician arrived in Los Angeles just a few years ago to pursue his dreams, he was hit with the harsh reality that Hollywood had a ways to go before they could represent him fairly. After a short stint on the Magcon tour that brought some of YouTube’s heartthrobs to a meet-and-greet near you, he’s been doling out his expertise on men’s fashion and grooming and stealing the hearts of K-pop fans on TikTok.

How did you get started online?

“When I moved to L.A., I had this gilded dream of being an actor like everybody comes to L.A. with this dream. I was bright-eyed and bushy-tailed, thinking I was going to be in movies and making music.”

So your original plan wasn’t to get into social media?

“I’ve always been in acting class and getting trained. Growing up, I’ve never seen myself represented in mainstream media, so I always thought I want to be the first to break down barriers and be a champion for my community, so it drove me to pursue acting and entertainment. Then I got here and realized there was a lot of seedy, shady stuff behind the scenes. Whereas now, in the last year and especially in the last few weeks, people are starting to get ‘woke’ about the racial injustice that happens in this country, but I experienced it firsthand in the acting world.”

“Growing up, I’ve never seen myself represented in mainstream media, so I always thought I want to be the first to break down barriers and be a champion for my community, so it drove me to pursue acting and entertainment.”

What’s the earliest viral video you remember having?

“There was a channel called ‘whatever’ that I reached out to and asked him for a collaboration. He suggested we do a video going up to girls and asking for their numbers, and I said, ‘Great,’ because it’ll flip so many stereotypes on their head about Asian guys being nerdy and show that we can be as much of a ladies’ man. That was the first one to go viral, and I think it got like, two million views, and I started my own channel after that. Things started happening from there. I did a hard pivot from there, from pranking to lifestyle and grooming.”

That’s crazy! What was it like getting invited by these guys to go on a meet-and-greet tour?

“It was really crazy because those tours were like—I always wanted to do music, so when that tour contacted me, I was like, ‘Well, I want to perform songs, and I want to do music and have stage design,’ and they were like, ‘No, no, no, it’s not that kind of tour, it’s scaled back.’ This tour was literally like guys would walk out with their SnapChats and be like, ‘Yo, Philly, what’s up,’ and there would be no show, no talents or anything, and I was like, OK… I guess I was caring too much about it, so I didn’t get to live out my pop-star fantasy, but it was a good experience living on this little tour bus, and Jake Paul was part of it too before he was really big.”

Since then, you’ve evolved your content and go against the grain as far as what people expect from you. What’s your latest venture?

“My latest venture is offering consumers the first ever HD realistic wig for men by MoonFiber LABS. Wigs have been around since ancient times, but they’ve never been designed at the caliber that I am doing, and they’ve never been optimized for a younger demographic that want options in terms of cutting edge styles and colors. I always wanted to be an innovator in this space, and then during quarantine I said, ‘OK, how can I figure this out and bring it to the market?’ And I want to be the best one.”

“Wigs have been around since ancient times, but they’ve never been designed at the caliber that I am doing, and they’ve never been optimized for a younger demographic that want options in terms of cutting edge styles and colors.”

What inspires all of your wig styles?

“I would say definitely the world of K-pop is an inspiration for me because those guys are very experimental. In American culture, there’s this really fragile masculinity where guys can never do this or wear that. In Asian culture, self-care and grooming are very normalized. Like if you go to Seoul or Tokyo, there are magazines that are bible-thick solely dedicated to men’s hair. Whereas in America you just have GQ. Innately and culturally, I feel like I’ve always been tapped into that side of me taking care of my hair and skin.”

“I do facial exercises like, almost every day or even when I’m just bored. I always find myself doing my tongue-to-roof exercise and things like that. The ones in the video are more for show, but I incorporate it into my daily life. There’s a whole community of guys who are into mewing, and that’s another interesting side of American beauty culture. In Asia, it’s very broad and general, but I knew there was an audience for that, so I made that video.”

What do you think has made you successful online?

“I think what it is is [I] keep pivoting and I keep evolving, so that’s what I think is really important. In pop culture, the people who stay on everyone’s radar are always the ones that keep evolving.”