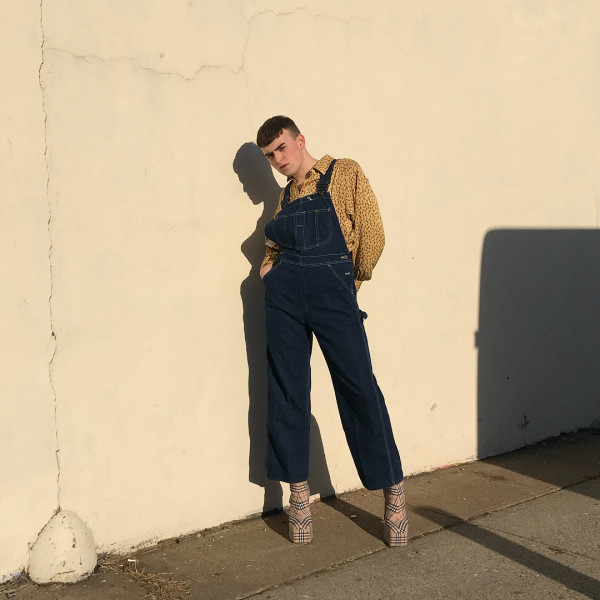 If you were to ask Luke Meagher what makes his style of fashion critique so appealing, the HauteLeMode founder would point to his own YouTube banner that breaks it down in four words: Fun. Sassy. Bi**hy. Analytical. In addition to being all of the aforementioned, Meagher is also still technically a college student finishing a degree from FIT and effecting change in the fashion industry from his bedroom. While he’s no stranger to an online skirmish, the new-age critic is distinct for this important quality: He only dishes what he can take.

When did your fashion obsession begin?

“I got into fashion because I’m from Staten Island, but I went to school in Manhattan. I went to an all-boys high school, so the only way I was going to get my fashion fix wasn’t from boys in wrinkly shirts and ties and khaki pants. I would walk home back to the ferry, but on the way, I’d pass Meatpacking and Soho, and it sort of was there that I started to cultivate that there are people that dress really well. From there, I said, ‘I want a camera,’ and I started shooting street style for a blog.”

Great starting point! How did that lead you to get on YouTube?

“I was a senior in high school, and it was January 2015, and my new year’s resolution—the only one I’ve ever made—was to start a YouTube channel, and that was how HauteLeMode started in its infancy. I thought, if there’s no one talking about fashion on YouTube, then why not let it be me?”

“I went to an all-boys high school, so the only way I was going to get my fashion fix wasn’t from boys in wrinkly shirts and ties and khaki pants.”

What was the first video of yours to go viral?

“So I went to London to study abroad, and while I was there I started making fashion show reviews, and that was how the fashion-critic aspect of HauteLeMode developed. Then, in the summer of 2018, I found out the Alexander McQueen documentary was coming out, so I thought I could make a video with the history of McQueen so if people want to go see it, they have this database of what’s going on. So I did a video of the ten most-known McQueen shows, put that together, and most of those McQueen shows were very raunchy, like ‘Highland Rape’ and ‘Nihilism.’ I put it out and flopped. It flopped so hard, and I was like, ‘OK, it’s fine, whatever.’ Then, out of the blue like, a month later, it gets hundreds of thousands of views, and [I] thought, ‘That’s not me, so I wonder who hacked into my account?’ But the video had sort of just popped off. So that McQueen video went crazy, and since I left all the nudity and raunchiness in it, YouTube wouldn’t let me monetize it. So my first viral video I made no money off of, but it set me up to see what people really enjoy and what can be popular. It’s something I’m still very proud of, and if there’s a shining-star video, that’s the one I think of every time.”

One of the things I love about your channel is you cover so many different subjects and eras in fashion. Are there any eras you want to get into that you haven’t yet?

“Personally, I love the 1960s. I think the Youthquake, youth culture, and the mod scene is something I’m really drawn to, but I’m trying to really go and scope out on HauteLeMode the entirety of European fashion in the 20th century. It’s a full spectrum that’s been explored, but I don’t think people put it together in a way that makes it something people care about. That’s what I’m trying to do is make people actually care about fashion and have a language to discuss it in.”

Your videos have been shared and recognized by some big names in the industry. What was it like the first time you connected with someone you really admire?

“When Nicola Formichetti reached out, I was like, ‘Hahaha, who’s playing a joke on me, it’s so funny,’ and when he said he was excited to be on the phone with me, I was like, ‘Bitch, I think this is a prank call!’ So he’s been a really great friend, but it’s sort of hard to work on social media and be in the fashion industry at the same time because you’re not linked directly to the fashion industry always, and you’re kind of outside, so in a way, I personally feel very detached from fashion people and the fashion world. I’ll hold court and I’ll go to the shows I want to see, but for the most part, I’m not going to shows and showroom appointments or have an oodle of friends in the PR world that get me into these places, so for the most part, I feel pretty removed from the industry.”

“My job as someone working on the internet—I always sit at home and bitch about fashion collections, so in reality it’s exactly the same, but the only thing that’s changed is I’m staying with my family currently. It’s really interesting to watch the industry sort of struggle with becoming fully digital because the industry has struggled to go digital and build a brand presence on the internet without being fake and forced. So it’s an interesting time, not for me and the other influencers, but more so because we’re sitting here like, ‘We’ve been doing this for years, and now you all have to get it together and make some digital content.’”

You’ve been outspoken on the internet from the start. Has criticism become easier to deal with, or do you really not care?

“I think I’m somebody who—not thrives on the hate, but I can tolerate it. If someone leaves a nasty comment, I can actually look at the comment and take the personal thing out. Like when someone says ‘You’re so ugly and your video at 10:40 is actually incorrect,’ I can take out the ‘you’re so ugly’ part and then go look at 10:40 and see what went wrong. There are hate comments that come with people’s opinions, so you have to take some out and not take it personally because there are things that I don’t know when I’m doing reviews of 30-something fashion collections from Paris Fashion Week. You’re gonna f**k up stuff, but my audience is really smart.”

“It’s really interesting to watch the industry sort of struggle with becoming fully digital because the industry has struggled to go digital and build a brand presence on the internet without being fake and forced.”

So you learn a lot from the criticism?

“I learn so much from my comments section because my audience is really smart and they know a lot of stuff that I don’t… There are a lot of people who get a lot of hate that isn’t always necessarily constructive, but if there is something constructive about them, I’ll do my best to learn about it, change it, because there’s a lot of stuff that I make mistakes on. But I always try to recognize it and see what’s happening, so I’m always trying to adjust and change because I don’t want to be like the old guard that doesn’t understand racism or classism or coronavirus. I want to understand because the fashion industry isn’t just an industry for rich people, that’s a misconception. So we’re all a part of the industry, and everybody’s voice does matter because we all buy clothing. I try to filter out the bad and take the good that I can.”

What’s your relationship to being an influencer? Do you feel like a part of the greater community?

“I’ve interacted with other YouTubers and have friends that are in the community and have met some amazing people who are all kinds of YouTubers, but I’ve also met people who do reviews of music, and I’m obsessed because I don’t know shit about music, so I need someone to tell me why Lady Gaga’s music is good so I can intertwine that with why I think her fashion choices are good. There is an expansive world of Youtube, but the drama stuff I sometimes get myself into because being on YouTube, I feel like I have to talk about certain things… I don’t really feel like I can stay super impartial to things if I’m involved, but if any of the YouTube girls want to say, ‘Luke, I need your advice,’ I’m always there for them. It’s happened, and I’m here to be an open heart and have the conversations that they need to have because my thing is I’m trying to make everybody look good. Because if YouTubers are fashionable and chic and on their sh*t, then by association I also look smart and chic and fashionable because I’m also a YouTuber. So I’m just playing an association game and saying, ‘Girls, let’s all look good, and we’ll be better together. Look good, and they’re gonna respect you more, so we gotta be on it.’ It is the sartorial PSA, I’m helping all of us.”

What has been your favorite thing to see online recently?

“The Hanifa fashion show because I’m pretty sure it was the first live, 3-D fashion show, and it was really beautiful, not only because the technology worked, and on top of seeing a 3-D live-stream fashion show, we’re also seeing a good one. Balenciaga did a virtual rendition of a collection before, but I don’t think it was as strong as the Hanifa collection, and the way the clothes fit is so beautiful. She sold out the collection, as far [as] I understand, so I love that and feel like it’s one of the ways we need to move because it’s doable if you’re able to do it well.”