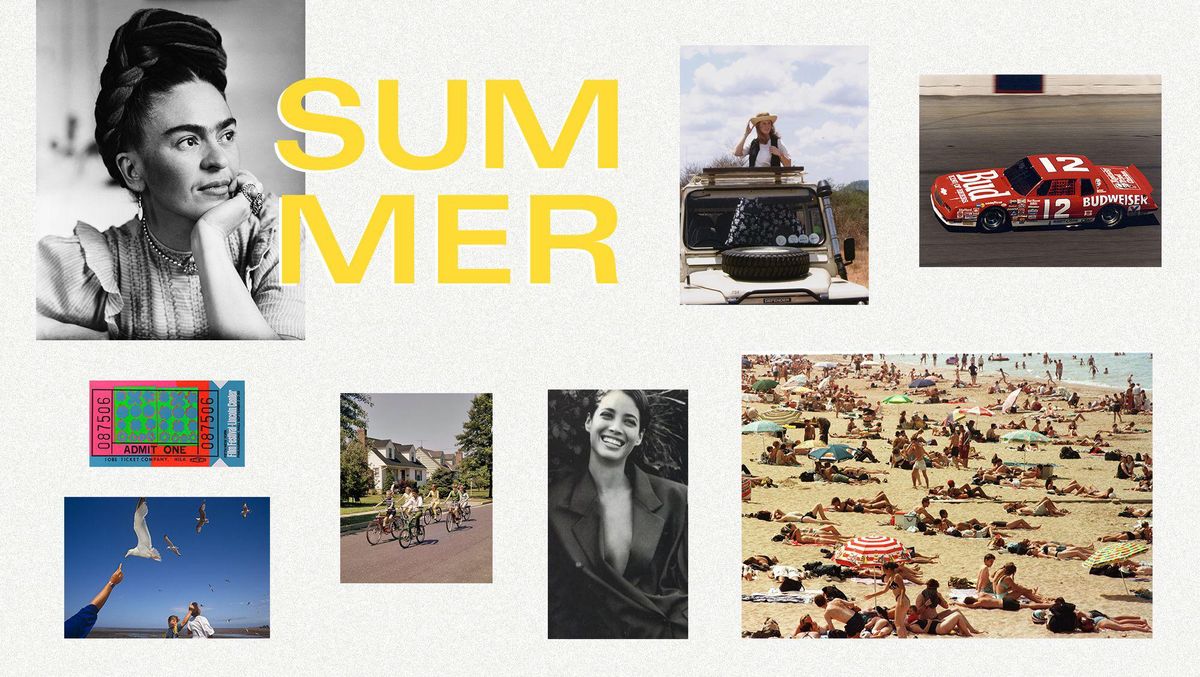 A Visual Depiction of Our Summer Style Mindset

Everywhere friends of Coveteur are finding inspiration this season.

For those whose job it is to be inspired, they must observe daily life with a critical eye. Anything can spark the flame of an idea. Sure, museums and galleries exist for a reason, but the mundane aspects of this world are as viable a source, if not more so. In this case, the art form in question is fashion, and the medium is personal style.

We turned to industry creatives across the board—stylists, designers, and digital creators—to share the things, people, and places informing their style this summer. Though what people wear is always interesting, they often look beyond an industry-specific perception of fashion, per se, and instead seek artistry in a melodic note, a seaside boat ride, or even a city playground.

From there, the innovators in question often utilize a mood board to pool all of their creative inspiration in one place. Its purpose is intended to create a feeling or direction which then informs stylistic choices going forward. So that's exactly what we did—compiled all their various sources of inspiration to create five summer style mood boards.

Boat Trips: "I can't get enough of getting out on the road with my ladies, and I'm so happy we're able to start traveling again. On a recent trip to Lake Travis, Texas, there were a lot of big sunglasses, cutoff denim, and '80s-inspired Americana, from red, white, and blue bandanas to vintage Budweiser t-shirts. But looking ahead, I can't wait to glam it up a bit and get dressed in some fabulous frilly numbers that are perfect for that European yacht life." —Nikki Erwin, Founder of Established

Pro Sports: "I couldn't miss the 2020 Super Bowl in person, and I always love to incorporate fun team-related apparel into my everyday wardrobe. Whether it's a mesh L.A. Raiders crop top or a USA '76 Olympics bathing suit, or my own 'Nikki' ring with a Nike-inspired swoosh, I love mixing in iconic logos that have a 'go team' kind of feeling." —Nikki Erwin, Founder of Established

Babar Playing Tennis: "What a vibe. It brings two of my favorite things together: Babar, the unbelievably stylish French children's book character/elephant king, and the sport of tennis. I can also sneakily reveal that Rowing Blazers will be coming out with a three-way Babar tennis-themed collaboration with Babar and FILA later this summer." —Jack Carlson, Founder of Rowing Blazers

Safety Gear: "I have been using neon colors a lot recently. I think seeing all the construction and safety workers around the city has seeped into my brain and all I want is neon safety vest—themed clothing." —Batsheva Hay, Founder of Batsheva

Things in Our Environment

Dolce Vita: "We recently bought a house in Italy, and I've since been obsessed with the dolce vita of living life there, including the typical Italian style. In the same vein, these movies have recently totally been inspiring my style and mood—La Dolce Vita, La Piscine, Call Me by Your Name." —Rabea Schif, Presenter & Model

Portugal: "Incredible coastlines, food, and it is less crowded than Italy in the summer!" —Fiona Morrison, Founder of Wolf Circus

Caribbean: "All of the people know me for my exploration within my southern culture through my brand House of Aama. But I'm also Caribbean and grew up with a lot of these influences in my life. From the music, the spiritually, and vibrant garments. In addition, the dancehall women because I'm still young and sexy." —Akua Shabakam, Founder of House of Aama

Bad Weather and Its Clothing: "The forecast for London this past week and the weeks coming is nothing but rain! Although not my favorite weather, I've been trying to find the fun in it and have dug out accessories like bucket hats, boots, and floor-length, waterproof coats, which together create a really cool look." —Leah Abbot, Stylist

Range Rover Classics: "Such a great '90s mood. My parents had one when we lived in London in the early '90s, before they were cool. I've wanted one ever since. I finally got one and worked with Brooklyn Coachworks to restore it and paint it bright yellow. It's featured in our new campaign. To me, it goes with a more general love and appreciation for '90s style I'm feeling right now." —Jack Carlson, Founder of Rowing Blazers

Christy Turlington and Caroline Bessett Kennedy: "They are forever icons and muses to me! I especially love their '90s, timeless style and the way each of them effortlessly incorporated menswear into their everyday wardrobes." —Anna Christin Haas, Founder of Galvan

Poised and Sophisticated Women from the 1900s-1950s: "Their adornment and accessories. I'm inspired by Black women in the postbellum South and the gothic era. (I add a lot more color, but I'm truly obsessed.) These women had such dignity about themselves. During the Harlem Renaissance, there were some amazing Black women that I admired, not only for their academics and artistry, but amazing style. Zora Neale Hurston is that girl. When I'm exploring this time period, I'm in awe of all of the one-of-a-kind, signature pieces. It inspires me to find special things in the market (whenever I'm not wearing House of Aama)." —Akua Shabaka, Founder of House of Aama

Mary Kate + Ashley: "I'm really into '00s Mary Kate and Ashley again. Love their looks rattling around in ballet pumps, flip-flops, and 17 layers. Especially the low-rise jeans and massive belts, big shades, and a ciggy. Will be trying to pull off flares with pointy sandals—I have my eye on these new baby-blue Prada slingbacks at the moment!" —Phoebe Lettice Thompson, Stylist

Tracee Ellis Ross: "I recently finished re-watching the iconic series Girlfriends, which sees Tracee (or Joan, in the series) sport so many memorable looks. From combat boots to minidresses, she switches her style and identity in each episode and inspires me to not be boxed in and to really just have fun with it! She also continues to play with trends now, at the gorgeous age of 48, which only makes me excited for the future and my style maturing alongside me." —Leah Abbot, Stylist

'90s Alaïa: "At the moment, I'm deeply inspired by Alaïa and his work from the '90s. I love that he was a sculptor and the way he channeled this creativity into celebrating the female form through his work, which resonated in Galvan's designs for our upcoming power knit collection." —Anna Christin Haas, Founder of Galvan

"Hollywood" by Steven Meisel: "There is a Steven Meisel shoot for Vogue Italia in 2005 called 'Hollywood' that's super inspiring for summer looks. It's chaos, and I love that." —Phoebe Lettice Thompson, Stylist

Halston on Netflix: "I love a series that takes me back and educates me on different avenues of fashion in the past. The series opens with Halston ripping up material by hand to create gorgeous yet simplistic gowns for his clients—a truly 'nothing to something' story as he grows into a world-renowned designer." —Leah Abbot, Stylist

Julian Charriere: "Another one for me is Julian Charriere, whose focus is conceptual, mixed-media commentaries on the relationships between human beings and their natural surroundings." —Anna Christin Haas, Founder of Galvan

Frida Kahlo: "The last museum I had the pleasure of attending was the Frida Kahlo Museum. Her wardrobe and styling sections really stood out to me. She wore such beautiful, elegant but cultural-specific dresses. Her use of color and personal touches have really inspired me as well. I am already a dress type of gal, and this inspired me to add more pieces to my wardrobe. Also, connecting to being an artist and wanting to explore your creativity in all facets even if you're in the studio a majority of the time." —Akua Shabaka, Founder of House of Aama

La Collectionneuse: "The film is the epitome of a European summer." —Fiona Morrison, Founder of Wolf Circus

Bjork: "I have been leaning hard on her music. The atmosphere is somehow getting woven into my new collection. There is something so vulnerable and childlike that I love." —Batsheva Hay, Founder of Batsheva

Country Music: "I am a down-home girl at heart, even though my home is in Los Angeles. There's nothing better than being front row singing along and wearing a huge cowboy hat, boots, and a bunch of gold jewelry—and this is where the inspiration for my new Ride or Die collection came from. I wanted to bring in some of my favorite motifs and styles like horseshoes, bolo ties, and words like howdy and cowboy to reflect a piece of my personal style. I even added in some pearls and leather to create a fresh vibe." —Nikki Erwin, Founder of Established

The Capsule Wardrobe Challenge: How 4 Stylish Women Interpret the Concept
This Australian Designer Is a Master of Easy Summer Style
The Summer Staples Our Staffers Can't Wait to Wear