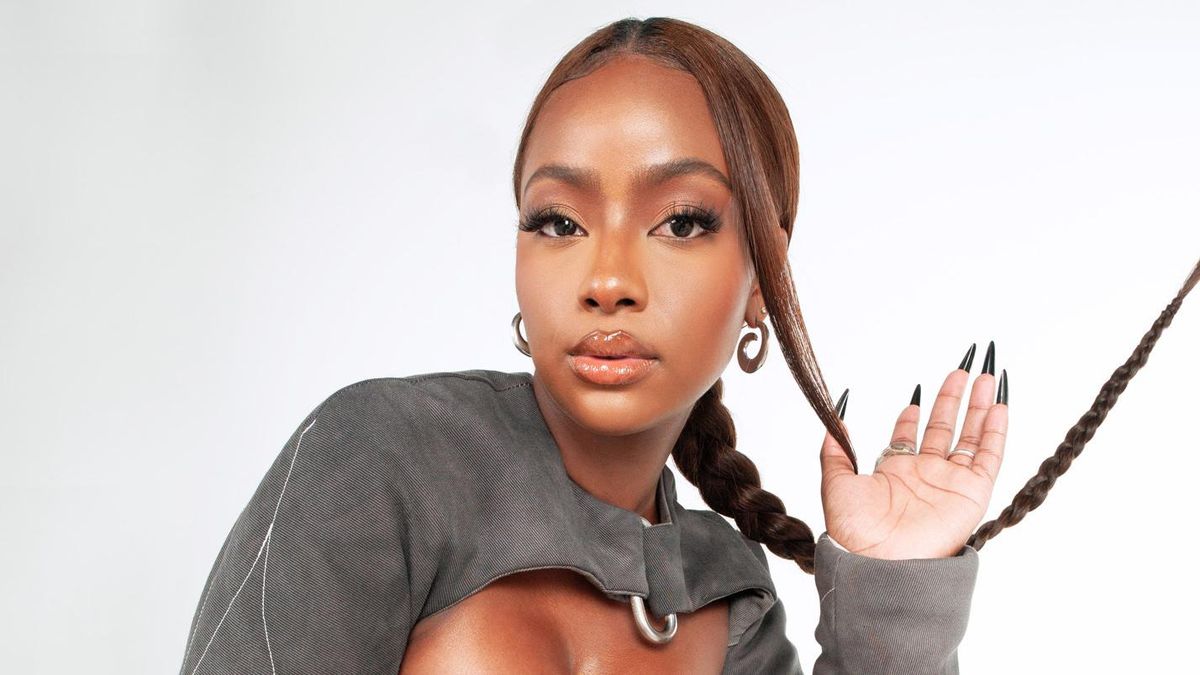 The singer speaks on her tumultuous past, Timbaland, and finally trusting herself.

Reflected in the glass sliding doors behind Justine Skye are the crisp blue skies and rolling lawns innate to the impressive houses of North Los Angeles. Access to this kind of manicured landscape—or just space in general—is as much an L.A. status symbol as a nice car or a Saturday night reservation at Nobu. A view like this indicates an impressive socio-professional journey in a city where the odds are stacked against you. It says, I've risen high enough to have a whole world of wannabes at my feet.

For Justine Skye, space is still a relatively unfamiliar luxury. The 25-year-old spent her early years in Brooklyn, before her Colgate smile and velvet vocals saw her trade Fort Greene for a spin in the entertainment industry washer. Her surname was scrubbed of its unnecessary suffix, and "Skye" signed her first record deal at the age of 17. With the cycle set to hot and fast, the aspiring singer hoped to emerge a brighter star than ever. Instead, her life became a conveyor belt of executives with big ideas and Hollywood friends with bigger followings. Rinsed beyond recognition, Skyers would endure slow suffocation while Justine Skye became both vessel and accessory.

Much of Skye's early success as a singer was credited to her status as a mood board must-have on Tumblr. Her purple unicorn branding filtered into all facets of her imagery, most memorably her violet-hued hair, and persisted as she moved among several major labels. While Skye continued to cement her place in young Hollywood, often sitting courtside with a Jenner or Bieber (née Baldwin), she would recruit some of hip-hop's heaviest hitters. Tyga, WizKid, DJ Mustard, and more would all board the Justine Skye train, yet no track arrived quite as she hoped. Eventually, Skye would find freedom as an independent artist—the product of "self-realization."

"I've been in the system, so when I left all that I thought, Wow, I'm making the biggest mistake of my life," she remembers. "So then I went out on my own and started using my resources. That's when I started to make the best music I ever had, because it was coming from a genuine place—not just like a science project where you're creating something because you have a deadline."

In early quarantine, she received an unexpected DM. Timbaland had seen one of her recent covers and wanted to connect. "Sure," Skye responded, figuring the storied producer wanted her to revisit a song from his own catalogue; How about a Nelly Furtado track? But Timbaland had something else in mind. Skye flew to meet him in Miami, and the following two weeks saw them devise a full project. Space + Time Sessions would mark Justine Skye's second album as an independent artist, but the first time she'd witnessed the kind of all-encompassing passion for music making from all directions in her eight years as an artist. In the project's creation, she'd found the right publicist and manager; the visuals were correct. The assignment, as the kids might say, was understood—and Skye was excelling.

"You have to know what you want," Skye advises. "All the greatest people knew what they wanted and followed a path to achieving it. I realized I couldn't just wait on everything else. I always knew what I wanted to do, but it took discovering my true artistry."

Her long-time friends rallied. Hailey Bieber, SZA, and Kendall Jenner doubled for a hype team in the comments. Bella Hadid could be found as a cameo in the video for her debut single, "Intruded," which premiered in February. With Skye's silken spanning of the octaves on the sultry track, gone were rumblings of tabloid-worthy beef over past boyfriends or peanut-gallery critique. Outsiders realized her connections were coincidentally—not consciously—clout-heavy.

"People think it's for appearances," she says. "They think it's for socials or paparazzi. So it is really annoying to be boxed in or given this title or perspective because at the end of the day, we are real human beings and not just gossip fodder... They're the people I call when I'm crying."

In some ways, Skye's high-profile relationships have hurt as much as they've helped her. For those unfamiliar with her story, it might be easy to credit her career to inner-circle nepotism. Skye claims to take responsibility for her at-times "diluted" message. The digital age has taught us that any beautiful girl on Instagram can likely always be professionally reduced to, well, just that. As such, Skye has occasionally flirted with "influencer" territory during her musical tenure—a consequence of the singer's social media origins overpowering her career as a musician while she "sat back and waited for things to come to her."

"I started at 16, and it's like, I was never going to have purple hair forever," Skye laughs. "But with some people it's like how you become known, that's how you stay until you really shake it up... I developed this 'Justine Skye: the brand,' even if the music was the root of all of it."

Still, there's an upside to running among those whose moves remain under intense scrutiny. Skye notes that any backlash she's been forced to endure throughout her career pales in comparison to that of friends whose own followings eclipse hers in both number and fervor. She's learned to put her phone down when caught up in the hamster wheel of content production. "Anything I'm going through, they've had worse ten times over, and how they've carried themselves in moments like that, it's like, literally I have no reason to be sitting here sad over what this random person said. Sometimes negativity can cloud you from reaching your full potential, and I've been very adamant about not letting that affect me. "

Though there has been plenty said. Skye's decision to kneel during her rendition of the national anthem at a Brooklyn Nets game in 2017 provoked no shortage of backlash. Three years later, she was forced to revisit those same conversations—both online and off—in the wake of George Floyd's death. She facilitated group meet-ups with friends to discuss injustice across various industries. On the song "We," from Space and Time Sessions, Skye addressed the moment.

Although, activism comes in many forms. It may not have been her initial intention, but Skye became an anti-domestic abuse advocate after releasing a song that addressed her own physically violent relationship with another popular artist in 2019. While she hoped her ex-partner's name would remain protected, several alleged threats to her safety made that impossible. What ensued was a barrage of insults slung at Skye via his immense fandom, often demanding she "stop lying." More than half of domestic violence cases went unreported as of 2019 for survivors' fear of incurring further trauma, and the spotlight only makes coming forward that much less appealing.

"For people that haven't been in a situation like that, the approach is I would have never let that happen," she says. "But you don't know what you're going to do until it happens to you. It's a messed-up situation where there's domestic violence or abuse, we have this fear of being harmed even more if we are to seek justice for it, even public justice."

Throughout the course of her career, Skye has been romantically attached to several male music stars. The relationships have provided her a unique understanding as to how men navigate the industry, further confirming the amount of work required by her gender to achieve a similar level of prestige. Skye notes it's "a lot cheaper" to maintain a man's music career and easier for cis male artists to achieve a chart-topping moment.

"For a female artist, it's like, do you know how much went into that one hit?" She queries. "What goes into Beyoncé's thing versus Drake's? Like the looks have to be on point, the choreography. It's just so completely different, the number of extras women have to do versus a man. I can't even think of a male artist who could even closely compare."

Nonetheless, Skye is prepared to labor for her craft and also expects nothing less of those around her. She's "not begging" for anyone to work with her, and she's done relying on a team to propel her to the next level. Now it's The Justine Skye Show, and her influence extends to every area of her artistry in her quest for awards shows and accolades. She knows a lot of people stopped at her headline, and now she wants the hard-hitting profile. More specifically, she's ready to be re-introduced.

"It's removing the pride I had before, banging down doors and making connections. This is going to be a real career-defining moment for me. Nothing is impossible if you put in the work, and I think that's a great story, too."

When Justine Skye's Wi-Fi begins to fritz, she's forced to relocate. The view disappears as Skye slides back the glass doors, abandoning her outside post for one indoors, closer to the modem. While only a minor inconvenience, it's one that has inadvertently redirected the course of our interview. There have been many sliding doors in Skye's life, where things might have gone differently were she to have made a different decision at a different time. Sure, if Skye could, she might tell her Tumblr teen-idol self to trust in her vision more—but Justine Skye doesn't have any regrets, not really. Every event, circumstance, or choice has led her here.

Now, she has the space to be Justine. And the view is beautiful.

Skip Marley's Spiritual Self-Care Routine
The Tea on Taraji P. Henson: She Is Exactly Who You Think She Is
It's Yvonne Orji for Me: The Best Friend We Didn't Know We Needed

music
More From the series Celebrity