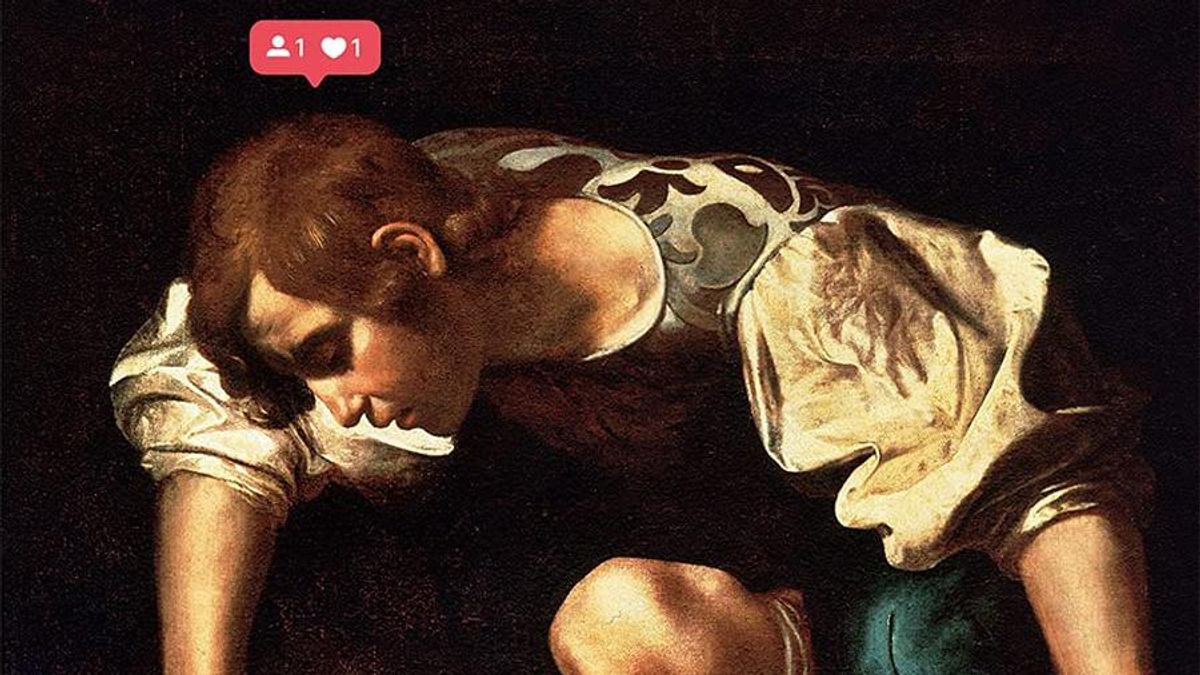 In her witty and clever debut The Portrait of a Mirror, A. Natasha Joukovsky reinvents a Greek myth to give readers a glimpse into the human psyche.

In The Power of Glamour, author Virginia Postrel writes, "Glamour is not something you possess, but something you perceive." It's a magic trick, casting a rose-tinted veil over the eyes of the beholder. However, even though glamour itself may be a fantasy, it's effects are very real; it intensifies desire and stokes ambition. It's also a currency, and your market value is based on the worth that society has placed on your attributes.

The idea of glamour, who has it, and who wants it is at the center of A. Natasha Joukovsky's clever debut novel, The Portrait of a Mirror. The two high-society couples at the center of the story—Charles "Wes" Range IV and Diana Whalen, and Dale McBride and Vivien Floris—are entangled in a web of desire. Joukovsky's dialogue is quippy, sharp; stylistically, the voice is similar to Edith Wharton and plotwise, it's reminiscent of Mary McCarthy's The Group. Even with these more classic influences, the novel strikes a very contemporary tone. Joukovsky cracks open the world of the four protagonists and analyzes the texture of a specific type of life (privileged, elite liberals) during a specific moment in time (2015). (At one point during the novel, three of the characters are at brunch in the West Village, arguing about whether or not Adnad Syed, the man at the center of the hit podcast Serial, was guilty.)

The novel is driven by interpersonal recursion, which is the idea that when you're talking to someone, you're not really thinking about the conversation you're having with that person; you're thinking more about what they're thinking about what you're saying. To translate this theory to fit the age of Zoom, no one's looking at the other people on the call; we're all too busy staring back at ourselves. The people you choose to surround yourself with also signals to others who you are or who you want to be. About halfway through the novel, the higher-ups at the art museum that Vivien works for decide to send her, rather than another team member, to a mid-level donor art reception because those in attendance would perceive her as glamorous, boosting their own personal morale: "Compensatory benefits were usually payable in the form of unlimited alcohol and a conversation at an evening reception with someone like Vivien, whose reflective glow validated their sense of their own cultural refinement and social importance."

We're forever trying to read one another's minds at all times in order to perceive how we're being perceived, all while looking like we couldn't care less about what other people thought about us. It's a manufactured indifference, and if you can crack the code, you gain entry into certain coveted social spaces. The faux laissez-faire attitude is difficult to keep up, and failure to do so is a red herring that you do not belong. In a piece for Outline, writer Amanda Mull states, "...Money also frequently buys you both boredom and a ceaseless desire to be catered to. This is why rich white women typically have great hair, or at least hair that looks like a lot of time and effort went into it, and why it was immediately so conspicuous to me that [Anna] Delvey's was terrible." She then goes on to talk about Elizabeth Holmes, the founder of former medical startup Theranos: "At its height in 2016, Holmes's net worth was estimated at $4.5 billion, but even then...her hair looked like mine does when I've put off a haircut a month too long while waiting for an overdue freelance check—thin and split at the ends, dry-looking, uneven from breakage. Her mistake was the opposite of Delvey's: she overcorrected." Delvey and Holmes were out of place in the environments that they attempted to blend into because they didn't have rich-girl hair; glamour eluded them. The chinks in their armor were visible to those who knew where to look.

Interpersonal recursion and the work that goes into presenting yourself to be perceived a certain way is supposed to be secondary, operating in the background, but Joukovsky thrusts it directly into our line of sight. When Vivien is searching for a dress to wear, the narrator writes, "She needed to look like she hadn't given the dinner a moment's thought, and this would take time." The Portrait of a Mirror is essentially a self-portrait—or, in today's day and age, a selfie—and Joukovsky forces the reader to become painfully aware of the ways that we craft ourselves for the world. It's like accidentally making eye contact with yourself while taking a selfie on your iPhone. To stare at yourself and find yourself looking back is jarring; coming face to face, eye to eye, with your own vanity and narcissism is uncomfortable, to say the least.

Vanity cuts across the many themes in the novel, especially when it comes to how Vivien and Diana present femininity. Vivien clings to feminine norms:

"Vivien Floris was the sort of woman who seemed so perfect she almost failed to pass the Turing test, the most impressive aspect of her algorithm being her apparent unconsciousness of her algorithm's effect. It was an art so well practiced, Diana recognized, that it had crossed into second nature."

While Diana self-awaringly breaks from those norms:

"To say that Diana was clever, animated, refreshingly frank—these were apt, but also insufficient. Her surface had a shiny, stylized quality, to be sure, but there was an underlying honesty of effort, an honesty almost unheard of in privileged circles. There was an implicit social risk in trying too hard, and a kind of bravery in it, in deliberate rebellion from manufactured nonchalance. And yet there was a nonchalant air to this very rebellion. Was not such honesty part of her gambit? The truth was such a foreign concept, it had its own kind of affection."

Following a shallow analysis, one might assume that Diana is the one who is actually doing what she wants by pushing back against these societal norms. However, on the contrary, she's just as bonded to interpersonal recursion as Vivien is. Diana gives a fuck about looking like she doesn't give a fuck. You're supposed to put all this effort into maintaining a self-assured appearance, but no one is allowed to see that effort. When the facade becomes visible, the illusion falls apart and it no longer has the intended effect.

In Luke Burgis's new book, Wanting: The Power of Mimetic Desire in Everyday Life, he explains desirability and why we want the things that we want. He draws upon French sociologist René Girard's theory on mimetic desire—it's the idea that humans don't know what they want, so they look to other people for cues. Near the opening of the book, Burgis states that we learn to want the same things, like a Hamptons home or a designer slip dress; however, this type of imitation leads "people to pursue things that seem desirable at first but ultimately leave them unfulfilled. It locks them into cycles of desire and rivalry that are difficult, practically impossible, to escape." Oftentimes, we go after goals that we've picked up from others. This is particularly clear when Wes describes his New York City loft that he hates: "It was a purchase that reflected not who Wes was, but who he wanted to be, who he wanted his friends to think he was."

Now, at this point, you may think, "Why don't the characters just change? Why don't they do what they want?" In novels, movies, and art in general, there's this pervasive idea that the protagonist confronts something—that something is a catalyst for change; and then, voilà, they're different people, completely rid of all their negative attributes. The thing is, that is very unlikely to happen in real life. As people get older, they're less likely to change and grow in this idealistic way. Rather, Joukovsky conveys the various mental states of the four protagonists at the heart of the novel in order to illuminate an aspect of the human condition and the world we live in to the reader. And in my opinion, that is far more valuable.

In Ovid's "Metamorphoses," Narcissus is drinking from a spring when he sees his face clearer than he ever has before. This love of his reflection turned into an obsession, and after realizing that his image was beyond his reach, Narcissus lost the will to live, turning his tale into a tragedy.

When it comes to relationships, validation takes shape in the need to see ourselves reflected back towards us. Wes, Diana, Dale, and Vivien are looking for themselves in other people. While having a conversation with Diana, Dale says this about his fiancée, Vivien: "In many ways Vivien's greatest depths are rooted in material things...but you—me? I think we're fundamentally more interested in ideas than things." And for Vivien and Wes, their prep school upbringing acts as a mirror that reflects both their likenesses: "...that two similar pasts were actually a single shared one, augmenting each other's importance to the other's life in a way that seemed to fully, unequivocally justify the present."

However, like Burgis states in his book, this form of desire is fleeting because the protagonists are engaged in a constant comparison game, sometimes willing to veer off the path chosen for them—just for a moment—before course correcting. Reading the novel, it wasn't difficult to see a form of a Freudian death drive take shape; all four characters repeated the same actions with the hope of finding a greater meaning. But when your desires are based off those around you and aren't virtuous in nature, the cycle continues until you reach a bitter end.

On the surface level, a story about affairs amongst privileged people may appear superficial. What's all the fuss about narcissism? Isn't it just a way of showing yourself some "self-love"? The issue arises when you mistake Thanatos for Eros and fail to recognize that this cycle of unrelenting, perpetual narcissism can be deadly. There's a reason why this novel takes place in 2015–it's the same moment that Carravagio paints on the cover of the book. It's Adam and Eve before the fall, Narcissus before his death, the United States before the election of Donald J. Trump.

The Portrait of a Mirror

Wanting: The Power of Mimetic Desire in Everyday Life

The Power of Glamour: Longing and the Art of Visual Persuasion