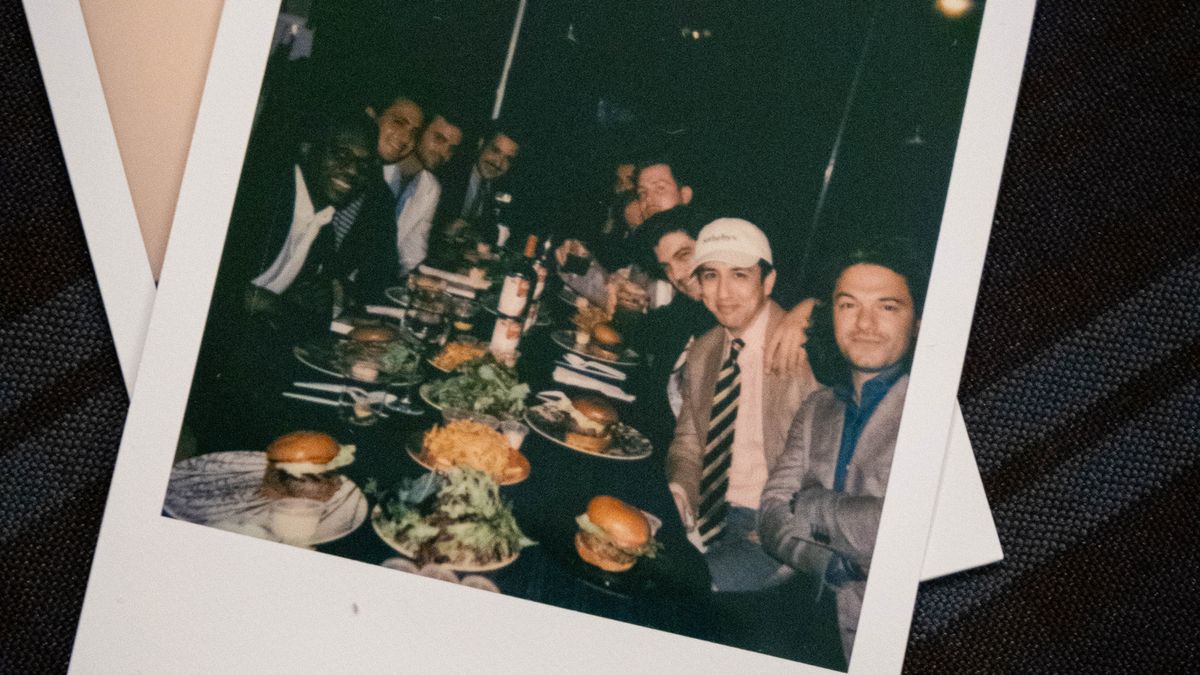 The Bullshot Book Club brings together some of the brightest young designers in the New York scene.

Tim Latterner
In the city’s sweltering August heat, the group has gathered once again. In the showroom of one of the members, looking down from the windows onto Christopher Street, they sit around a Black Watch tartan-colored tablecloth sipping bourbon and catching up on the latest news. They are the members of the Bullshot Book Club, and this is their monthly(ish) meeting.

Technically operating as a book club, that name acts mostly as a reason to get together as friends, collaborators, and peers of the menswear and fashion industry—where they discuss trends, new projects, designs, and everything in between. They are tailors, creative directors, merchants of fabric, art dealers with an enthusiasm for bespoke suiting, writers, and more. While many of their independent, self-made menswear labels have been steadily gaining popularity at an exponential rate—like Wythe New York, F.E. Castleberry, and J. Mueser—the talent of the designers and marketeers in the Bullshot Book Club clearly read as the Bright Young People of tomorrow’s menswear world.

“The club was founded in January 2019 by Chase Winfrey and Stéphane Timonier,” credits Woodruff. “We have a large group of friends who are all avid readers, and this became a platform (and excuse) to all get together over a dinner and discuss what we’re reading, among other things.”

The meetings start off casually over whiskey, wine, and commenting on the tie or jacket any given member arrives in. Usually, these meetings are held at a restaurant, but given the COVID-19 restrictions, the group has met at the private showroom of the J. Mueser brand. Guests were welcomed with a thermometer check and an allotment of Purell by members of J. Mueser’s staff, Jake Mueser, Chase Winfrey, and Mat Woodruff (who doubles as the club’s president), as well as their officemate and fellow member Fred Castleberry, whose F.E. Castleberry showroom is perched at the top of the showroom’s spiral staircase.

Photo: Chase Winfrey
It should be noted that, while an eclipsing majority of attendees wear suits and ties, meetings of the Bullshot Book Club are not formal affairs. Conversations range around the room, covering everything from that article about sweatpants that ran in The New York Times magazine recently, to chess stratagems, to favorite past participants on Love Island. The atmosphere is anything but stuffy, and while each suit is expertly tailored—because it’s hard to have an excuse for one that isn’t in a room full of designers—the scene feels more like a country house party in a P.G. Wodehouse book where laughter and drinks flow equally and freely.

Each time the door swings open, revealing another member in the threshold, the growing crowd cheers the arrival with drinks in the air and an exaltation that sounds like Norm entering the bar in Cheers—the largest of which happens when Michael Parenti, a fabric merchant specializing in the fine Italian stuff the designers work with regularly, walks in hoisting bags of burgers from Odeon in Tribeca.

Finally, with all members in attendance, member and art dealer Stéphane Timonier begins whipping up the signature drink of the club, passing around glasses. Dating back to the Mad Men era of the city—a favorite historical period of the lot—the cocktail consists of two measures of vodka, beef broth, Worcestershire Sauce, lemon juice, and a rim salted with celery salt. Basically, it tastes like a steak dinner and martini in a glass. That description, much like the cocktail itself, is like those optical illusion posters—whether it sounds wonderful or disgusting, it’s accurate.

[Writer’s Note: I genuinely found the drink far better than I expected to. It’s not about to be my go-to anytime soon, but I would advise those landing on the disgusted side to give it a shot first.]

Photo: Chase Winfrey
Roughly 60 percent of members enjoy the drink naturally, and the other 40 percent buy in for the tradition and have one as a sort of prop for the evening while keeping a glass of wine or bourbon handy. Member and club intern (half-kiddingly) Timothy Booth has it in his contract that he must have at least one during the course of the evening.

If it seems as though much of the meeting has gone on before discussing the book, it’s because it has. At a certain point, places are set and burgers from Odeon doled out around the table, and the meeting has “formally” commenced. The book, which one could argue matters in a book club, is Rashomon and Seventeen Other Stories by Ryūnosuke Akutagawa, a series of short stories largely about samurais in their daily lives.

“I thought the second story was the most interesting,” Booth begins, referring to the titular story, “Rashomon,” which describes an ancient gateway to Kyoto that’s grown derelict and decayed. In the story, a young samurai is faced with an old woman spotted pulling the hair from dead people left under the gate as the samurai is forced to either punish or absolve the behavior given the circumstances of death. “The intent determines [whether the character’s actions are] good or evil,” offers Castleberry.

“When they’re questioning whether something’s right or wrong in these stories, they look at the person’s past character too,” says Peter Middleton of Wythe New York. “‘You have to take into account who this person was,” he recounts of the old woman’s claim in the story, referring to the thieves she’s pillaging from.

Photo: Chase Winfrey
“The stories feel very specific and relevant today,” Booth adds. “A story about someone justifying stealing something, in today’s world when people are struggling and suffering, feels very real. Even before the pandemic, people going to steal bread for the sake of feeding their family.”

“Sure, things have changed a ton in 100 years, but who you are and your principles still matter as much today as in these stories,” Booth finishes.

“Morality still matters” echoes from the opposite end of the table, eliciting nods of agreement from the room.

Sooner than later, conversation moves from direct analyses of the book to imposing parables from some of the stories to contemporary topics. In turn, this turns to talking about other modern writers the group has been reading during quarantine, which raises the question of book proposals for future meetings. Eventually, the conversation drifts to how exactly the aioli at Odeon is this good and what ingredients can be tasted therein.

The format of the book discussion is broken as people get up to refill drinks or step out onto the balcony for a cigarette. To finish off the night, though, backgammon boards are doled out around the room, with members measuring out pieces and rolling dice in different games.

How to Be Parisian? Meet 40 Real Women from the City of Light
Aminatou Sow on How TF to Keep a BFF in the Middle of a Pandemic
Meet the 24-Year-Old Art Curator Championing International Black Artists
More From the series Culture