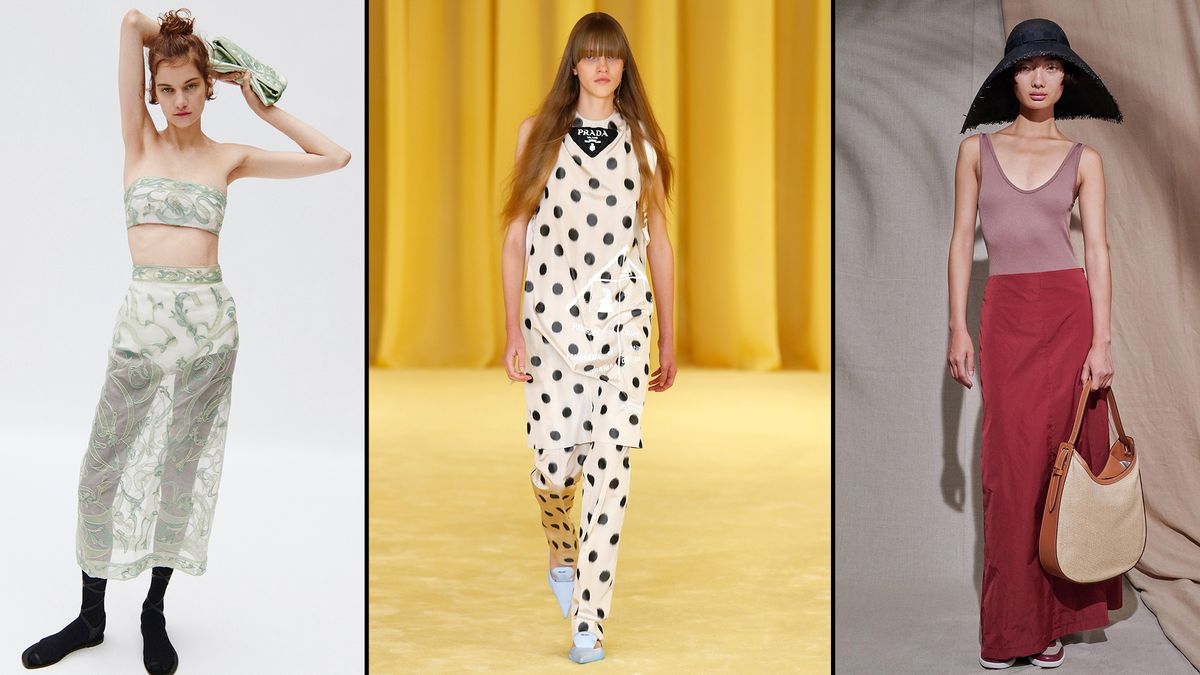 And everything else you need to know.

Camille Freestone
Graphic
Rachel Pickus
It’s safe to say this Milan Fashion Week all eyes were on the Prada show. One of fashion’s favorites, Raf Simons, formerly of Dior and Calvin Klein, joined the esteemed Miuccia Prada as co-creative director of Prada back in April, which meant this spring ’21 collection would be their first project together. The industry eagerly anticipated what a collaboration between the two beloved designers with different yet oddly complementary bodies of work could achieve. The result? A collection that featured pared-down silhouettes—printed sets of trousers and tanks emblazoned with the iconic triangular logo, full ’50s-style skirts with sweaters layered over turtlenecks, and, of course, relaxed outerwear worn in Simon’s favorite haphazardly clutched fashion. “A piece of clothing serves the role of making you live better. It is not an abstract job,” said Prada in the interview they piggybacked onto the show.

Others took a less practical approach. At Moschino, designer Jeremy Scott sent actual marionettes down the runway clad in looks rendered in tulle, brocade, and satin as little marionette editors watched from the front row—Hamish Bowles, Anna Wintour, and Vanessa Friedman all made an appearance. “The best thing I could do for everyone who is stressed about the election, the pandemic, social unrest, and the future was to give the gift of fantasy and take us away from all of it for a few minutes; let us enjoy this little fashion world of ours,” Scott told Vogue.com.

Moschino
Photo: Courtesy of Moschino
MFW also had a toss-up between designers hosting in-person runway shows versus opting for virtual presentations, similar to that of London. And while a few designers were missing from the archetypal Milanese calendar (Gucci, Jil Sander, Missoni), Paris heavyweight Valentino chose to show in Italy instead for the safety of the team.

In the case of Valentino, it was exciting to watch Pierpaolo Pacciaoli reinterpret his thoughts into a more wearable collection. (Side note: We highly recommend checking out the oversize riff on their classic rock stud accessories.)

Between signature minimalism at Max Mara, a reinterpreted WFH uniform at Tod’s, and sophisticated sheer confections at Fendi, here’s what we’re seeing this season.

A step above your typical stripes and dots, the prints we saw this season were out of this world. At Fendi, scenes of nature emblazoned sheer kaftans; at Ports 1961, silhouettes bloomed out of simplistic line drawings; and at MM6 Maison Margiela, polka dots took on a new graphic identity.

If a suit and a dress or jumpsuit had a super-fashionable love child, it would be a matching set—and we can’t get enough of them. At Ferragamo, we went mad for head-to-toe plaid, while polka dots on streamlined silhouettes captured our hearts at Prada.

A staple that fluctuates in and out of popularity, lace got a fresh makeover for spring. The current rendition is not the tired, ladies-who-lunch lace, but instead cut, perhaps by laser, in a looser pattern in supermodern silhouettes to give it an extra edge.

We can wax poetic about a classic tank forever, and it seems designers are on the same page. From Ferragamo to Tod’s, the slinky style was balanced out, simply paired with pants and skirts of looser fits, while at Philosophy di Lorenzo Serafini, we learned new ways to layer the staple style.

While some collections showed fantasy-inducing fashion dreams, others offered more practical garments that could actually be worn during our homebound lifestyles (i.e., the cropped knit). If you’re super bold, pair yours with hot pants like they did at Sportmax; otherwise we suggest opting for skirts or pants à la Etro and Versace.

Never underestimate the value of a good button-down. This is one of those versatile pieces that works everywhere, a feat not lost on designers. Instagram was a flurry over Valentino’s pink taffeta shirt shown over leather shorts and ballet flats. We also saw similar shirt styles at both Etro and Dolce & Gabbana.

While this season lacked otherworldly gowns wrought with boning, full skirts, and heavy fabrics, designers showed us how we can still dress up by creating flowing, almost kaftan-like dresses. These boudoir-reminiscent frocks were often rendered in sheer fabrics and are exactly what we want to be lounging around in come spring.