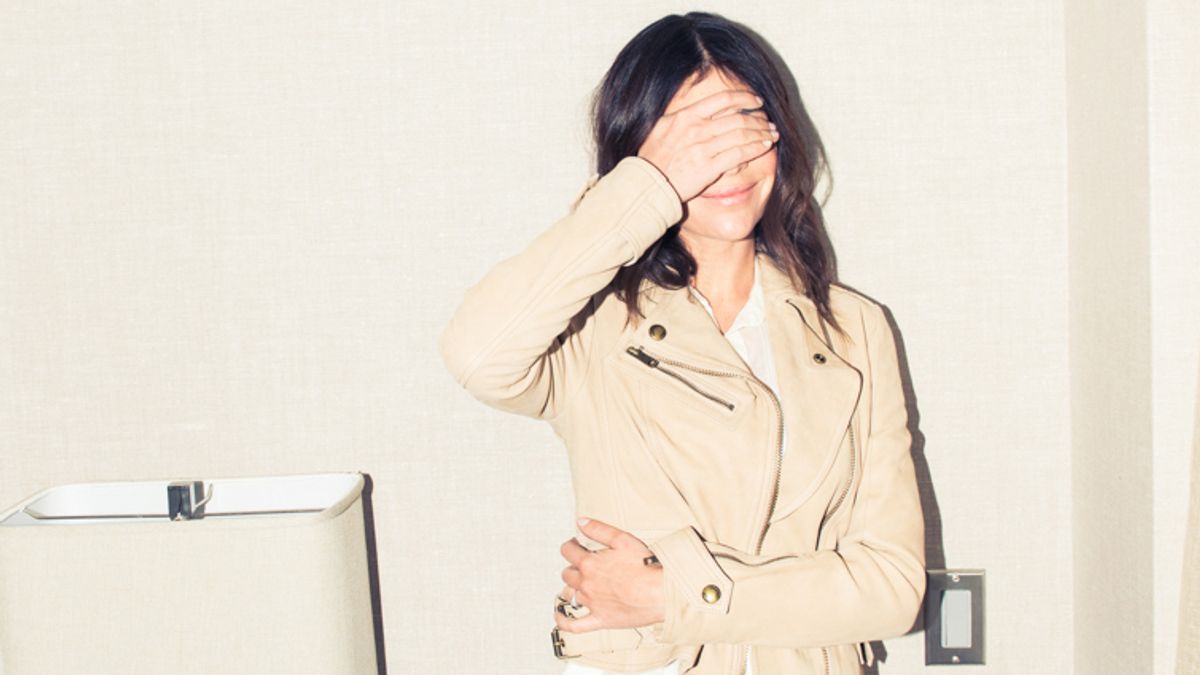 A writer details her journey in search of smooth, clear skin.

“Sebaceous what?” I replied in my dermatologist’s office when a biopsy of a small growth camouflaged in my eyebrow came back as Sebaceous Hyperplasia. I knew that what I initially mistook as milia or an ingrown hair required more advanced intervention after it resisted all my at-home troubleshooting.

Relieved to have ruled out skin cancer, yet discouraged and unwilling to accept that one growth may inevitably lead to more, I made it my mission to stop these pesky bumps in their tracks. I began my quest to learn everything there is to know about the condition, and for that I turned to the pros for help. But first, a little primer on the skin journey that led me here.

I was “blessed” with oily skin—a double-edged sword I inherited from my mother—and heard “you’ll be thankful for your oily skin one day” regularly, as though I had won the genetic jackpot (spoiler: more on genes later). My adolescent years were spent battling my oily skin and the breakouts that came with it, and I took the “if it doesn’t burn, it isn’t working” approach with my skin-care routine. My twenties ushered in a complexion that was pretty much problem-free for the better part of a decade. Then fast-forward to my thirties, and aside from the early signs of aging that my oily skin is helping to slow (mom was right, I AM thankful for it now!), I’m still seeing changes in my complexion. A patch of sun spots here, a visible capillary there, and a peppering of Sebaceous Hyperplasia tarnishing my smooth complexion goals.

So what is Sebaceous Hyperplasia? Let’s break it down.

We know that when a sebaceous gland becomes clogged, it can cause whiteheads or blackheads to form, but when the gland itself becomes enlarged, it is referred to as Sebaceous Hyperplasia. It is composed of benign growths of sebaceous glands that occur on the surface of the skin, most commonly seen on the nose, cheeks, and forehead. “They present as small 1–3 mm skin-colored or yellowish bumps,” says Dr. Y. Claire Chang, a New York–based cosmetic dermatologist. They often manifest as a cluster-like shape with a distinguishable depressed center. While at first glance they may have the appearance of a cancerous overgrowth, they are, in fact, harmless. Nevertheless, any newly developed growths should always be assessed by a dermatologist for a proper diagnosis.

“While the exact cause of Sebaceous Hyperplasia is unknown, it tends to occur in older individuals, starting in middle age,” says Dr. Chang. She goes on to point out that it is more commonly seen in fair-skinned individuals and those with significant sun exposure, and while the condition “is a proliferation of oil glands, it does not occur exclusively in patients with oily skin.” While there is no confirmed cause, she notes that other factors may play a role, such as lower circulating levels of androgen hormones associated with advanced age, though this remains to be proven.

New York dermatologist Dr. Amy Wechsler is quick to dismiss unsubstantiated factors in favor of genetics, citing the role they play in the development of Sebaceous Hyperplasia. “I see it run in families,” she says, “with certain individuals predisposed to the condition based on family history.” Dr. Wechsler goes on to add that a recent patient was the daughter of a patient treated years prior for the same condition.

Dr. Chang concurs and adds that while the condition tends to occur more commonly in older individuals starting in middle age, “Those with a strong family history may get it at an earlier age.” Further reinforcing the role genes play in the condition is validation from my own experience, inheriting not only my mother’s skin type, but her experience with the condition as well.

While the condition is harmless and doesn’t require treatment, many people often pursue it for cosmetic reasons. A Google search for home remedies will drum up things like apple cider vinegar, peppermint oil, and tea tree oil, all of which I can attest are of little benefit. To treat Sebaceous Hyperplasia, you’ll need to bring out the big guns, so to speak.

“My treatment of choice is electrocautery for individual lesions,” says Dr. Chang. “It is well tolerated, effective, and has minimal risks.” Electrocautery (also referred to as thermal cautery) uses an electrical cautery needle to burn the lesions. It is the most common treatment method among dermatologists, including Dr. Wechsler, who adds that she has been using electrocautery to treat her patients with great success.

My recent experience with electrocautery was a positive one—quick, painless, and effective. The textured surface of my forehead is now smooth to the touch, thanks to a few quick zaps by my derm in less than a minute. While the treatment has been shown to be widely effective, recurrence shouldn’t be ruled out. “Recurrence may occur, but the incidence is unknown,” says Dr. Wechsler. “It depends on the lesion and the effectiveness of the initial treatment.”

Other in-office treatment methods include cryosurgery, shave excision, chemical peels, and laser resurfacing, though they are less commonly used than electrocautery, and each comes with varied levels of success. “When severe or extensive, oral isotretinoin may be effective in reducing the number of lesions,” says Dr. Chang. Popular opinion online is that a topical retinoid may help reduce the size of existing lesions and ward off new ones, but according to Dr. Chang, those claims are unsupported. While she generally recommends a topical retinoid as part of an anti-acne and anti-aging skin-care routine, it is unclear how much they can help in the treatment of Sebaceous Hyperplasia.

While there is no tried-and-true skin-care protocol for prevention or recurrence, Dr. Chang recommends tailoring your skin-care regimen to your overall skin type, rather than the presence of the condition. Given that sun exposure has been linked to the development of Sebaceous Hyperplasia, daily use of sun protection is recommended, and from an early age.

It’s also important to consider how mental health and daily stressors can impact the quality of your skin. Drawing on her board certification in psychiatry, Dr. Wechsler often explores the mind-beauty connection in her practice, believing that our skin is a reflection of our state of mind and that harboring negative emotions can be even more detrimental to our skin than time. “Inner turmoil always reveals itself on the surface, in the form of acne, lines, dullness, and other visible signs,” she says, adding that “premature aging and adult acne are the two most common skin problems I see, and stress and exhaustion are often at the bottom of both.”

After extensive research and a lot of trial and error, I now find myself armed with an arsenal of tools to battle Sebaceous Hyperplasia, and my smooth complexion goals that I once thought unattainable are now within reach. I treat lesions with electrocautery on an as-needed basis, I have honed my skin-care regimen to a select few key products that work well for me, and I make a concerted effort to integrate mental wellness into my daily routine. If you suspect you may be dealing with a case of Sebaceous Hyperplasia, consult a dermatologist for an accurate diagnosis, and seek guidance on a treatment plan with your unique needs in mind.
Buy Now
1 / 5
Mighty Patch Invisible+, $18
I love these ultra-thin patches on freshly cauterized lesions to help protect and speed healing. Made with hydrocolloid, they create a moist environment to promote healing and draw out fluids from wounds and blemishes. They also prevent you from resisting the urge to touch. Virtually undetectable, you’ll find yourself forgetting to take them off before leaving home.
Want more stories like this?

Yes, You Are Probably Exfoliating Wrong
The Birkin Bag of Lipsticks Is Finally Here
8 Face Masks You Can Marinate In All Day Long
From Your Site Articles
More From the series Skin