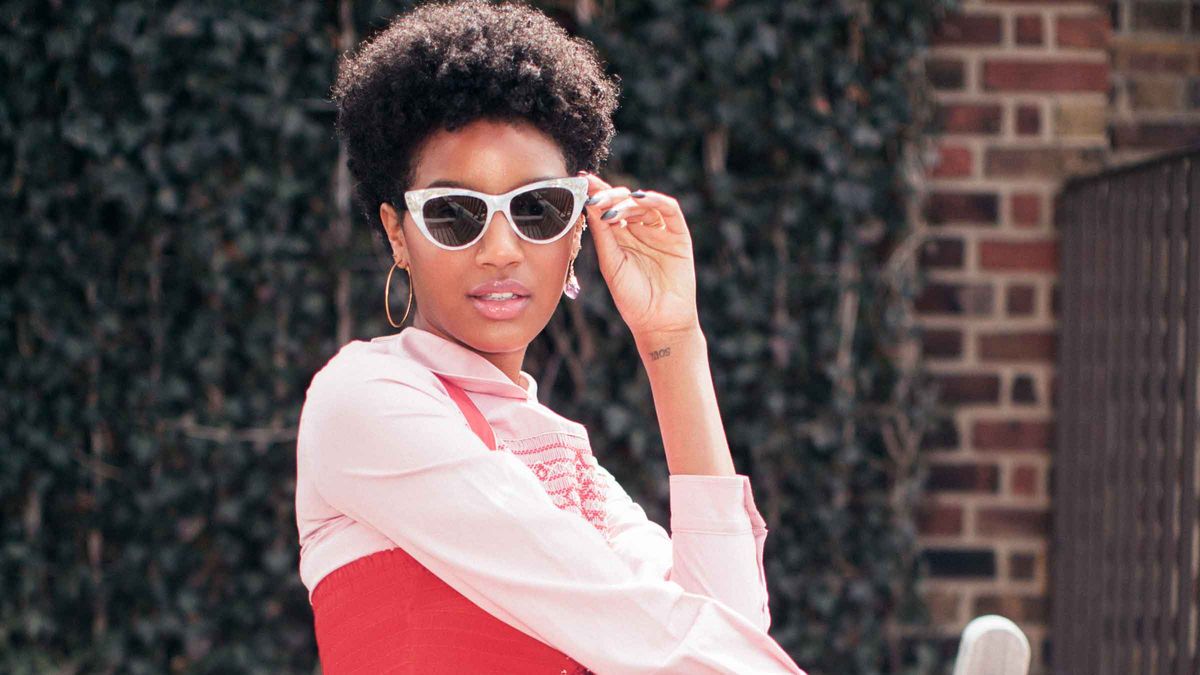 Who Isn’t She?! If You Don’t Know Ebonee Davis Already, You Will Soon

The activist and model talks racism and representation, sporting some of the very best looks of the season.

“I never really felt like I could totally look up to or relate to the model type that was being presented [when I was younger]. I didn’t feel like I looked like anyone that was popular or made it to any high level of success in the industry,” says Ebonee Davis, who, incidentally, has made it to a high level of success. That said, to call her a “model” would be like calling Rihanna a “singer.” Ebonee is an all-around inspiring person, and to be totally honest, it makes me feel about ten thousand times better about the state of the world that young women have someone like her to look up to.

“Representation is so important,” she adds. “It’s important to see somebody who looks like you so you have something to aspire to.” But all of this isn’t by chance. From a young age, she had her heart set on modeling, and now she’s in everything from editorials for Office to Calvin Klein Intimates campaigns, to a Pantene campaign. Oh, and she also gave a TED talk on diversity and racism in fashion, and Black Girl Magic, that you’ll hear all about later. Not that that was a one-off burst of activism either; she hosts a weekly YouTube show called “Pillow Talk” that highlights stories of marginalized people, and if you follow her on social media, which we highly suggest you do, you’ll see that she thinks about, writes about, and encourages all of us to push ourselves to question pretty much everything about the world around us. Like this week, for example, when she Tweeted, “Get you someone who isn’t bound by social norms, the expectations of others, and a limited view of what’s possible.”

“As Black women, we face oppression every single day with race, gender, and whatever other factor makes you marginalized. What Black Girl Magic means is that despite that, we have overcome it.”

Her agent, Sindy Gourlant, at Lions, had this to say about her: “Aside from her amazing features, what I instantly loved about Ebonee is her personality. She is a very outspoken person, and she knows how to use her voice, a real born leader; she...incarnates women’s empowerment.” See what we mean about not labeling her just a model?

However, at this point it bears saying that damn, can she model! It was our absolute pleasure to spend an afternoon with her, dressing her in the colors of the season, and hearing all about what makes Ebonee, Ebonee. All dressed in a Miu Miu onesie look, Ebonee dropped really low, cocked her glasses, and said, “Who isn’t she?!” Here’s what we learned.

How she got started:

“I wanted to model from a really young age. I was obsessed with America’s Next Top Model, and it was just something that I just knew I wanted. When I turned 18, I was old enough, and I went into a local agency in Seattle, and they signed me there. Then I started going to college; I was attending the University of Washington, but I decided to drop out and try to take my career to the next level and move to New York. So when I was 19, I moved to New York. I didn’t have an agency, and I had $700, which was like a month of rent. Luckily I got signed and started working enough to support myself. For the first two months, I didn’t even have a mattress; I was sleeping on egg foam.”

The importance of representation:

“Representation is so important. So often, as Black people or Black women, we don’t have those role models or people who we can look up to, or people in high places. Then we can say, ‘Dang, I’m coming from this place, but I can make it there.’ That is why it’s important for me to talk about where I come from too. It is not just a matter of ‘I see someone that looks like me,’ it’s also ‘I see someone that didn’t come from privilege, who managed to make it to this place.’ I didn’t come from a rich family. I had to hustle to make this happen for myself.”

“The bigger picture is that the fashion industry doesn’t just represent beauty standards. It is a representation of the current state of our democracy.”

All about her TED Talk:

“After the police murdered Alton Sterling, I wrote a letter. It was addressing the role media plays in perpetuating stereotypes and how we can change those stereotypes and create new narratives through representation. After I wrote the letter, the coordinator of the TED Talk event saw it and tweeted it. I DM’d him and asked if I could do a TED Talk. He said yes.

“I went into it recalling my experiences in the industry. Getting into the industry was extremely difficult for me; I went to every single agency over and over. I kept hearing, ‘No, we already have a girl with your look.’ Which, really, in other words is ‘We already have a Black girl.’ Because, you don’t have a girl with my look, you know what I mean? Then, when I got into the industry, it was more of the covert, systemic racism. If a hairdresser didn’t have the right products or was using tools on my hair that were too hot and I said something, [I was] automatically an angry Black woman, and then what I’m saying is then undermined by the stereotype.

“The bigger picture is that the fashion industry doesn’t just represent beauty standards. It is a representation of the current state of our democracy. How inclusive will we be? How accepting will we be toward one another? As creators of media, we have to put ourselves in people’s homes in the most positive way possible. Especially as Black people, we have been put into people’s homes as criminals, as thugs, as angry Black women. We have to put ourselves in people’s home[s] in a different way, as beautiful, representing every type of person. That is how you break down the stereotypes and create a new narrative for people. So when officer Joe is walking down the street, he doesn’t look at a Black woman or Black boy and think thug or criminal. Officer Joe thinks, ‘Wow, that person is beautiful, because I just saw a beautiful Black person in this magazine.’”

How that rejection felt:

“It made me really insecure. It made me feel like there was something wrong with me. It made me feel really bad about myself. I was young and at a different place with myself. I still wasn’t okay with who I was. What I said in my TED Talk was, ‘To be born Black in America is to be born into a world that makes you feel inadequate before you can take your first step.’ Every single moment of your life, you are aware of your Blackness, and in every single moment there is an attempt to make you feel less than. Whether it’s a lack of representation, you don’t see a reflection of yourself high on a totem in any way. Or the quality of life as a Black person, not having the same access to jobs or school or even the same quality of grocery store you get in your neighborhood versus a nice neighborhood with a Whole Foods. It is just every inadequacy, and you take it all in and internalize it, and it makes you think there’s something wrong with you. Why don’t I deserve these things? When I came to New York and kept getting rejected, I internalized it and thought there was something wrong with me.

“It wasn’t until I decided to wear my hair natural that I realized the problem wasn’t me, it was the society that we live in. I didn’t realize that the fashion industry was just a microcosmic representation of the greater society that we live. The same treatment that I was getting at all of these agencies, getting turned down, was the same treatment that one might get when applying for any job as a Black person, or for school, or anything.”

On wearing her hair natural:

“This culture on Instagram was Black women giving tutorials, and this rise of the natural hair movement and wanting to be a part of it. When I first started modeling, there wasn’t room for it. I just came across these e-mails, they weren’t my personal e-mails, but they were from casting directors sent to agents, and in the casting notes it said, ‘All models, except for Afro.’ When you say, ‘no Afro,’ the implication is ‘no Black,’ or Black, but without natural hair.

“When I speak about my natural hair, I want to make it really clear that I’m not knocking on anyone who doesn’t choose to wear their hair natural. It is just for me, personally, as someone who works in the beauty business, this is a form of resistance. This is a form of resistance for me. I like having long hair! I like to swing my hair back and forth; it feels good! For me, right now, I am resisting the beauty standard from the way that I dress and the way that I wear my hair. All day, every day, 24/7, I’m going to resist. Down to my ‘Black Lives Matter’ phone case.”

“So often, as Black people or Black women, we don’t have those role models or people who we can look up to, or people in high places.”

What Black Girl Magic means to her:

“What it means is, as Black women, we face oppression every single day with race, gender, and whatever other factor makes you marginalized. What Black Girl Magic means is that despite that, we have overcome it. As Black women, we are thriving. We are the most enrolled demographic in college. We are doing wonderful things. It’s like a rose growing out of concrete. That is Black Girl Magic. We are having concrete poured on us every day, and yet somehow we are finding a way to create something beautiful out of nothing.”

What love has to do with it: