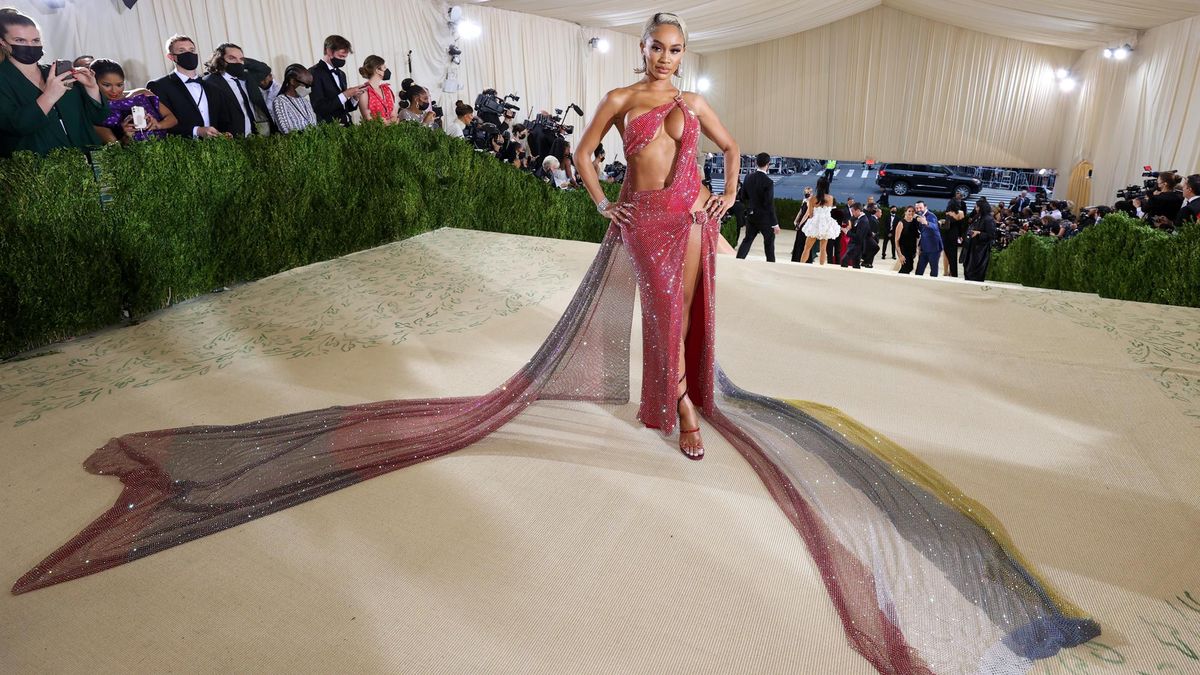 These five live rent-free in our editors’ heads.

After a year wrought with extensive deprivation of fashion experimentation—or lewks, as some may call it—to say everyone was eagerly anticipating this Met Gala red carpet would be an understatement. The Met Gala is, for all intents and purposes, the biggest night in fashion. This is where style knows no boundaries and the stars collaborate for months with designers to create an ensemble that will hopefully go down in fashion history.

The theme this year, which paid homage to American fashion as a whole, allowed for vast interpretation. There was the aesthetic route à la Megan Rapinoe in red, white, and blue Sergio Hudson, Leon Bridges in Western wear courtesy of Bode, or the old-Hollywood glamour option favored by Billie Eilish in Oscar de la Renta. Others simply chose to work with an American designer and then do whatever they wanted. As Megan Fox said, the fact that the dress was "on an American girl" makes it American fashion. And as is en vogue these days, stars like Alexandria Ocasio-Cortez and Cara Delevigne chose to make a statement in Brother Vellies and Christian Dior, respectively. We've asked our staffers to reveal the looks that spoke most to them. Continue scrolling to discover which looks sent our hearts aflutter on this second Monday in September.

The co-chair for last night's event donned a peach-hued Oscar de la Renta gown that was, in my humble opinion, the look of the night. The bonus to this showstopping moment? Besides the Cartier jewelry—which was, well, goals—Eilish worked with designers Fernando Garcia and Laura Kim only after they committed to going fur-free, which signals the positive influence celebrities and tastemakers can have on working with brands.

American designer Emily Adams Bode might have been the real star of this Met Gala as she dressed stars from Leon Bridges to photographer Tyler Mitchell to GQ global editorial director Will Welch, but I'm especially partial to this Lorde look. Facilitated by stylist Karla Welch, the Kiwi singer donned a creamy silk two-piece embellished with embroidery, beading, and crushed copper that looks luxuriously fluid and elegant. And I'm sure those flats felt great at the end of the night. Fresh off the cover of Vogue's September issue, the headdress really makes her look like fashion royalty. Honorable mentions go out to Lupita Nyong'o and Michaela Coel.

In this simple white gown designed by Aurora James of Brother Vellies, AOC spoke volumes. From the front, the impeccably tailored bodice continued down to a mermaid hemline made of tulle. The back bore the words "Tax the Rich," which were artfully painted to accentuate the curves and tailoring of the gown. Keeping the look simple, the congresswomen completed the look with her trademark hoops and pink flower pinned into her bun.

Diamonté Quiava Valentin Harper, the rapper known professionally as Saweetie, lived up to her first name last night. I'm not talking about the Christian Cowan dress composed of around 10 million diamonds (no, you didn't read that number wrong), but her beauty look. Her diamond-accented slick bob has me convinced that I need to cut my hair and dye it blonde. The gold claw-length manicure made me wonder if writing stories with three-inch, crystal-encrusted nails would be that bad. And don't even get me started on the makeup, brought to life by Stephanie Nimoh using MAC products. The arch of the bold brows, along with the dusting of golden powder over her skin, accentuated the high points of her face without being overpowering; the fluttery lashes and the ruby-toned smoky shadow brought out the hazel hues in her eyes; and the mirror-reflective gloss paired with a chestnut-colored liner pulled it all together. I already have plans to re-create the look this weekend.

Given her long-standing relationship with Saint Laurent and YSL Beauty, it's no surprise that Zoë Kravitz walked the red carpet in a completely sheer, crystallized, logo-patterned slip dress by the French design house. But the pièce de résistance was the matching silver thong, which was on full display as she walked the red carpet ahead of rumored beau Channing Tatum.

I'm not quite sure how her look embodies Americana (the theme feels like a formality at this point—who really cares?), but it does feel self-referential: Over the summer, she took to Instagram to speak out against hyper-critical headlines about her choice not to wear a bra. By baring all, she's doubling down in the hottest way possible. Honorable mention goes to Pharrell Williams and his wife Helen Lasichanh matching sleek, cowboy-inspired leather CHANEL suits.

So What Actually Happens in Between NYFW Shows?
When Did Crocs Become a Metaphor for Shifting Societal Norms?
2020 Produced Gains for Black Creative, But Will Growth Be Permanent?