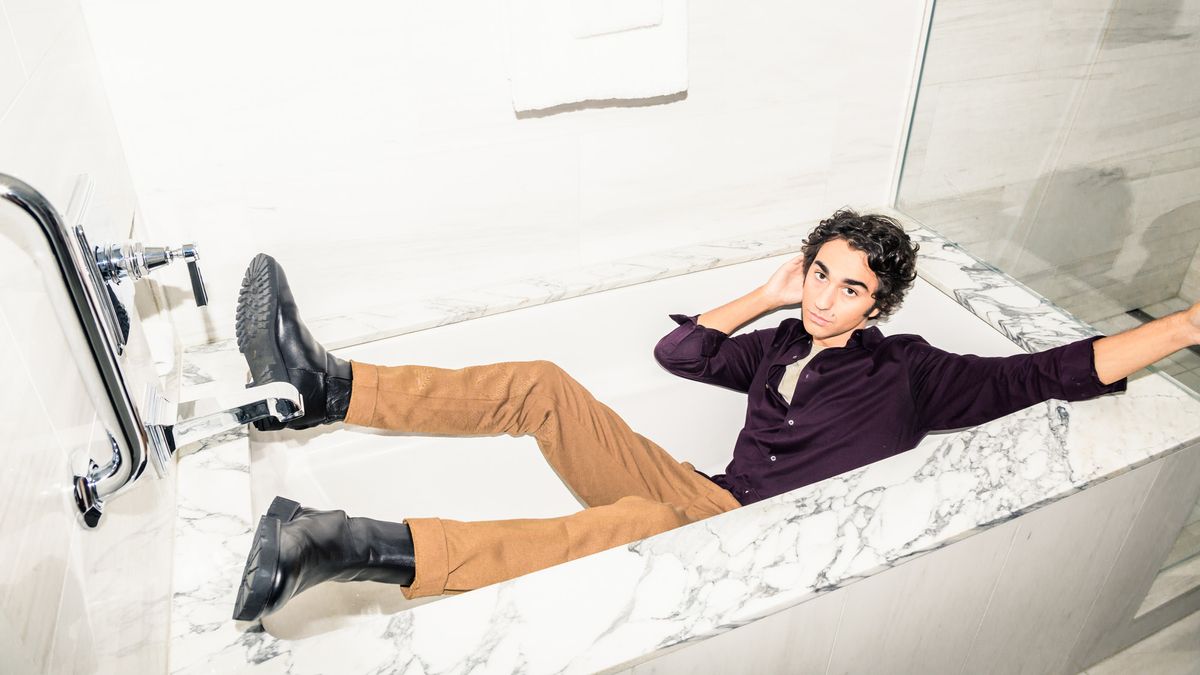 Hollywood Is Falling for Alex Wolff

With three films premiering at TIFF this year, you’re about to see a lot more Wolff.

Noah Lehava
If there was a signifier for career accomplishments, having three films premiere at the Toronto International Film Festival (TIFF) in a single year would be one of them. It may even be a record, in fact. Alex Wolff—who is in town for a marathon of press and premieres for his films Castle in the Ground, Bad Education, and Human Capital—doesn’t worry about that. He’s more of a go-with-the-flow type of guy. That’s obvious the moment you meet him. But he definitely keeps himself busy. If three films weren’t enough, Wolff also has the film Cat and the Moon, which he wrote, directed, starred in, and created music for, on the horizon for an October release. Let’s just say you’ll see a lot more of him soon.

In the midst of his hectic schedule, he jumped over tables and couches and got in the bathtub in the Gold Suite at the historic Fairmont Royal York hotel  (which just celebrated its 90th birthday with a swanky reno) in downtown Toronto before sitting down for a hilarious and delightful chat about growing up in front of the camera, recalibrating after each film, and working with Nicolas Cage.

You started acting when you were pretty young…

“I started acting in the sonogram. That’s my line.”

Ha! What made you fall in love with film and acting?

“It’s kind of this special, weird thing where I fell into it [as a career]. I was obsessed with music. I watched Help! and A Hard Day’s Night and all these Beatles movies, and I loved the way they acted in those. Then I saw Stand By Me, and I remember that was the first time I thought, Oh, wow. I remember River Phoenix crying about the milk money in that scene where they’re crouched down outside. I was like, ‘Woah, I want to do that. That looks like so much fun.’ [It] looked like being with friends, and it just seemed like the most exhilarating, fun thing in the world. It was that [movie] and Goonies. When I saw those two movies, I just thought they were the best things ever. You know what’s weird, [I also saw] Amadeus at a really young age. I remember Tom Hulce as Mozart and F. Murry Abraham as Antonio Salieri, and I was pretty riveted by [them]. Those are some odd choices…but also Risky Business and The Graduate. I saw those pretty young, too. I was always well versed in movies, but those really changed the way I looked at movies and [affirmed] that I wanted to be in them.”

You practically grew up in front of the camera. How would you say you’ve evolved as an actor?

“Well, I definitely grew in height [laughs]. I feel in some ways that I am always trying to chase whatever I had as a little kid, because I think when you’re a kid, it’s just about freedom; you’re automatically sort of free in front of the camera. I wasn’t one of those kids who did a bunch of commercials or learned how to act [professionally]. I moved around with my brother and my friends on camera. So that was my introduction to film—loose kind of improvisation. In a way, I’ve always chased that. As you get older, there are a lot of road blocks and people telling you not to be a certain way, not to be so wild and vulnerable. So I really try to chase after what I had as a little kid and that kind of freedom.”

Do you have a mental checklist for how you select your projects?

“There’s no method to it. I think that something appeals to me in a certain moment. It’s strange where it seems that all these things that I want to do start appearing at the right time. I’m not big on necessarily believing that anything happens for some sort of reason, but I do feel that my luck has been [good]. I’m an insane Nicolas Cage fan. My whole life it has been a dream to work with him. I’m seeing him tonight, and we’re doing a film together in a couple weeks. Now I feel like I’m ready to do a film with him, [whereas] a couple of years ago, I would’ve been too tongue-tied. These things happen at the right time. You just have to go with the flow and not worry about doing ‘good’ movies or doing movies that people like. You have to follow your gut and follow your sensibilities. Each thing is satisfying some place inside of you in a moment in time. You can’t view anything as a stepping stone or as a career move. I don’t even look at my career holistically.”

Castle in the Ground and Hereditary seem like really emotionally and physically grueling films...

“Every movie is emotionally taxing. It’s funny because in Hereditary, people were so affected by the movie that they wanted it to be real. So they latched on to everyone’s process, particularly mine. There are some crazy things that happen. You hear stories from Patriot’s Day about me having these police officers walk up to me and say they wanted to beat me up because I look so much like the Boston bomber. Even in Jumanji, I do a scene with Danny DeVito where I have this kind of magical moment, and then when it was over, I was so emotionally distraught. Or, in Cat and the Moon, I broke my hand and split it open, literally gushing blood all over a taxi cab because I did a scene where I punch a cab. So I feel like when you do movies, it has to cost you something for it to work. I think it’s hard to be super vulnerable for a big period of time, and then come out of it and go back to normal life. That’s the part of it that doesn’t make sense. My favorite part is probably the preparation for the movie. It’s the most anxiety-inducing, but it’s the most fun doing all the research, getting fired up about it, and discovering stuff about your character. Then the hardest part is when it’s over. Boy, it’s tough.”

How do you recalibrate?

“Family Guy. Family Guy’s my thing. I also read a ton. I’ve read like, 850 [books] in the past month. This movie I’m about to do is all about truffles, so I just read The Truffle Underground. I’ve read it twice now. I’m obsessive, like a crazy person taking notes in it.”

Why is Castle in the Ground such an important film to you?

“I’m really proud of it as a movie. My parents also really like it. It’s my most gentle performance. I lost a bunch of weight for it. I think something about that makes it seem as if I’m a leaf blowing in the wind in the movie. It’s almost as if my character doesn’t have any skin. It’s like he’s this open-face sandwich or something. He has no protection, just blowing around, watching these things happen. He’s so fragile, he could just crack at any moment; he’s just one second away from melting. That’s how fragile he is. I don’t think I’ve ever been quite that delicate on screen, so that means a lot to me. That’s worth something to me.”

I loved Cat and the Moon. What made you want to tell this specific story?

“I started writing it when I was 15 [years old] during finals in school, and I actually wrote it as a distraction from studying for finals. [I wrote it] about my freshman year in high school. That’s when it all started. I was meeting a lot of friends, and they were taking me under their wing. I was traveling around New York and really getting to understand the city. I was in a kind of lonely period in my life. I wasn’t working, and I was having an odd relationship with both my dad and my godfather. The plot [of Cat and the Moon] was sort of based on my relationship with both those guys. Cal is an amalgamation of both of them. So the time was right, just writing my experience then. Then it took about five years to make it readable. It evolved into this story of this young man trying to find himself in this very volatile period of his life.”

How was it balancing writing, directing, being in front of the camera, and also doing the music? You really took this project on completely:

“[Laughs] Couldn’t get enough of myself! No, I really feel like acting is impossible. It’s like a purple dragon you’re always chasing to be really good. For directing, it’s a little simpler, a little easier than maybe I expected because I had a whole crew to lift me up and help me. When you’re acting, it’s kind of all on your own, lost in the middle of the ocean. So I guess it was nice to be able to want to have your back against the wall of an entire crew depending on you. I work well when my back’s against the wall. Having so many people help you is just such a relief.”

Is there a smell you miss the most? [Ed note: Watch Cat and the Moon for reference.]

“Aw… I love that, that’s by far my favorite question I’ve been asked, ever. I miss the smell of my dog, who passed away. I will occasionally smell a shirt that reminds me of her. There’s also this place in Fire Island where my family sometimes goes, and I’ll smell the ocean or something like that, and I’ll get so triggered. So hardcore triggered. It will remind me of riding around on bikes and seeing my family.”

Is there a place you feel most creative?

“I feel creative everywhere. You have to be creative everywhere. I remember I asked Eli Roth, ‘Is it hard for you, moving around all the time? Are you still able to write?’ And he was like, ‘Dude, you can write anywhere.’ It’s such a misconception that people think you have to be in your certain chair or whatever. [Eli] was like, ‘That’s bullshit. I wrote Hostel 3 on a plane.’ That was inspiring, so I’m not precious about it. I try to work creatively everywhere.”

Hustlers’ Lili Reinhart on Swearing off Low-Rise Jeans & All That Fake Vomit
Eiza González on Being Bullied & Dating in the Limelight
Danielle Macdonald Is On the Rise
Film &amp; TV TIFF
More From the series Celebrity