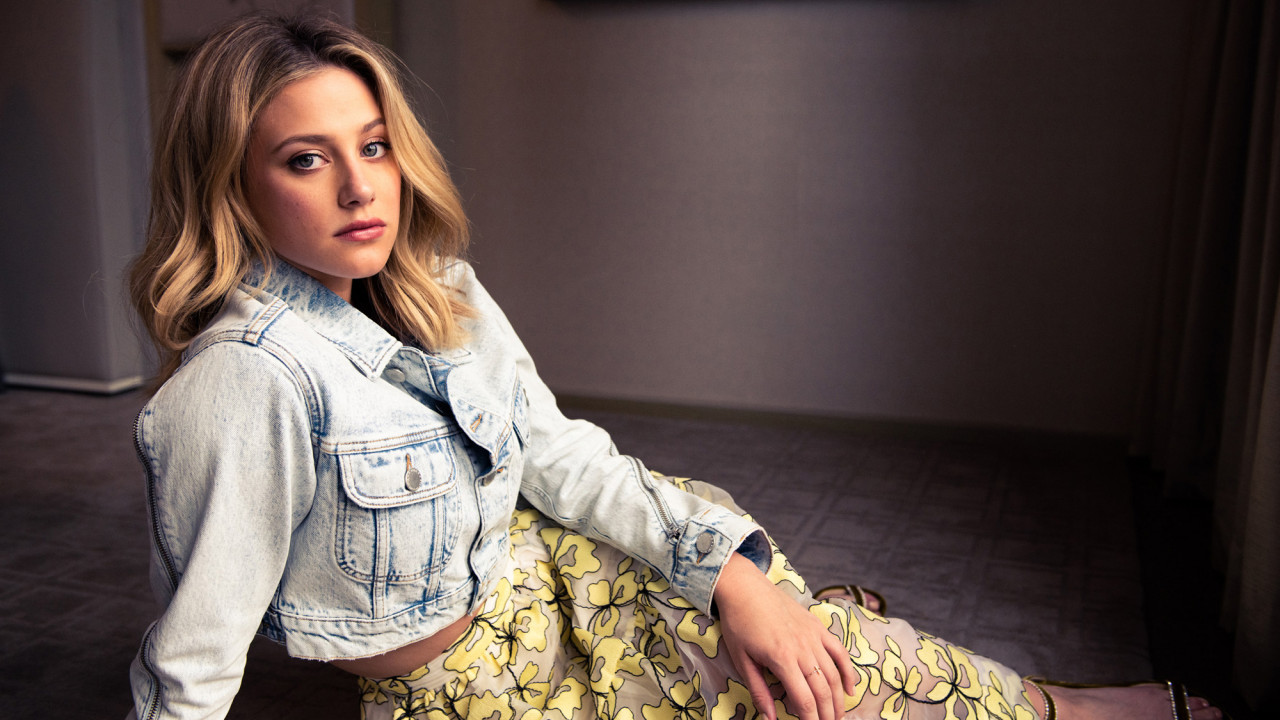 And that time she was too scared to talk to Will Ferrell on set.

Ahead of the world premiere of Hustlers—which features a stacked cast: Jennifer Lopez, Constance Wu, Keke Palmer, Julia Stiles, Cardi B, Lizzo, Madeline Brewer (and more, but no spoilers here)—I sat down with the Riverdale star during TIFF to talk early-aught trends, all those vomit scenes, and what she and boyfriend Cole Sprouse are going to be for Halloween. 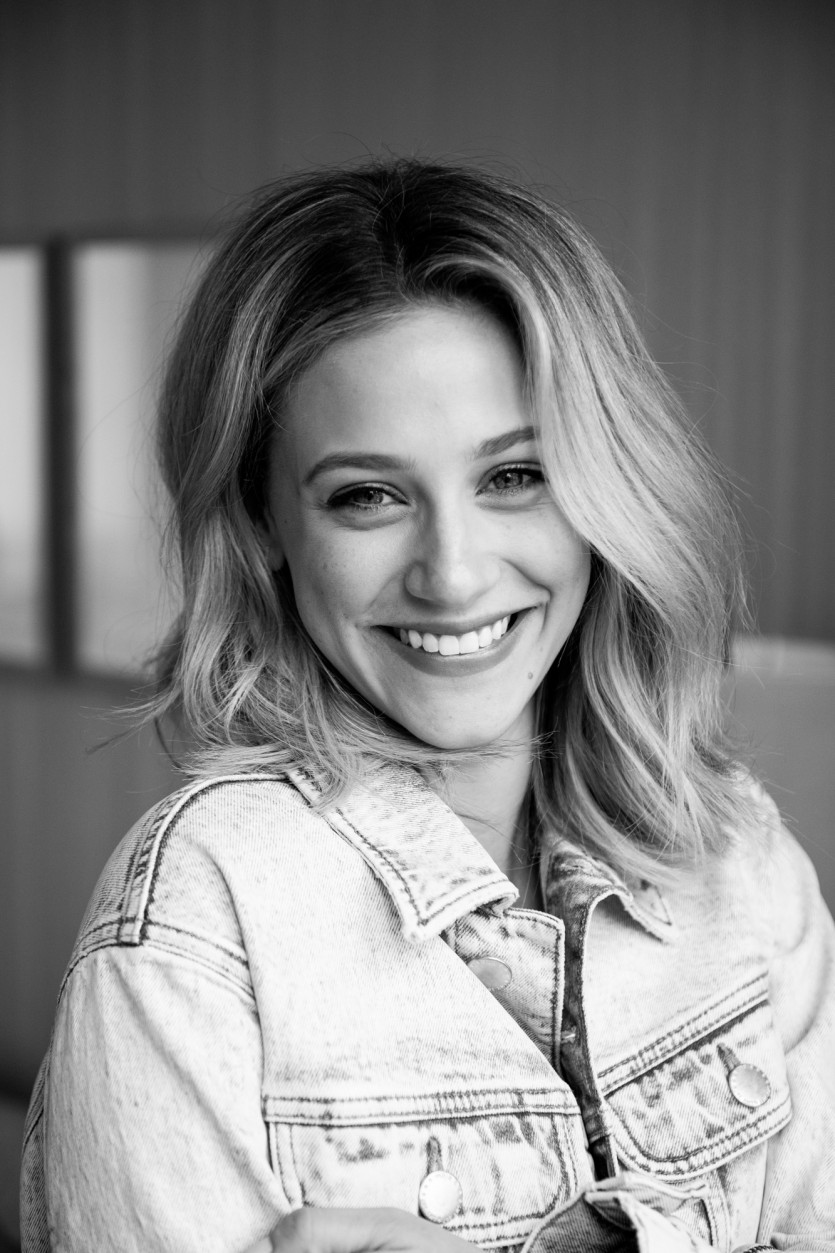 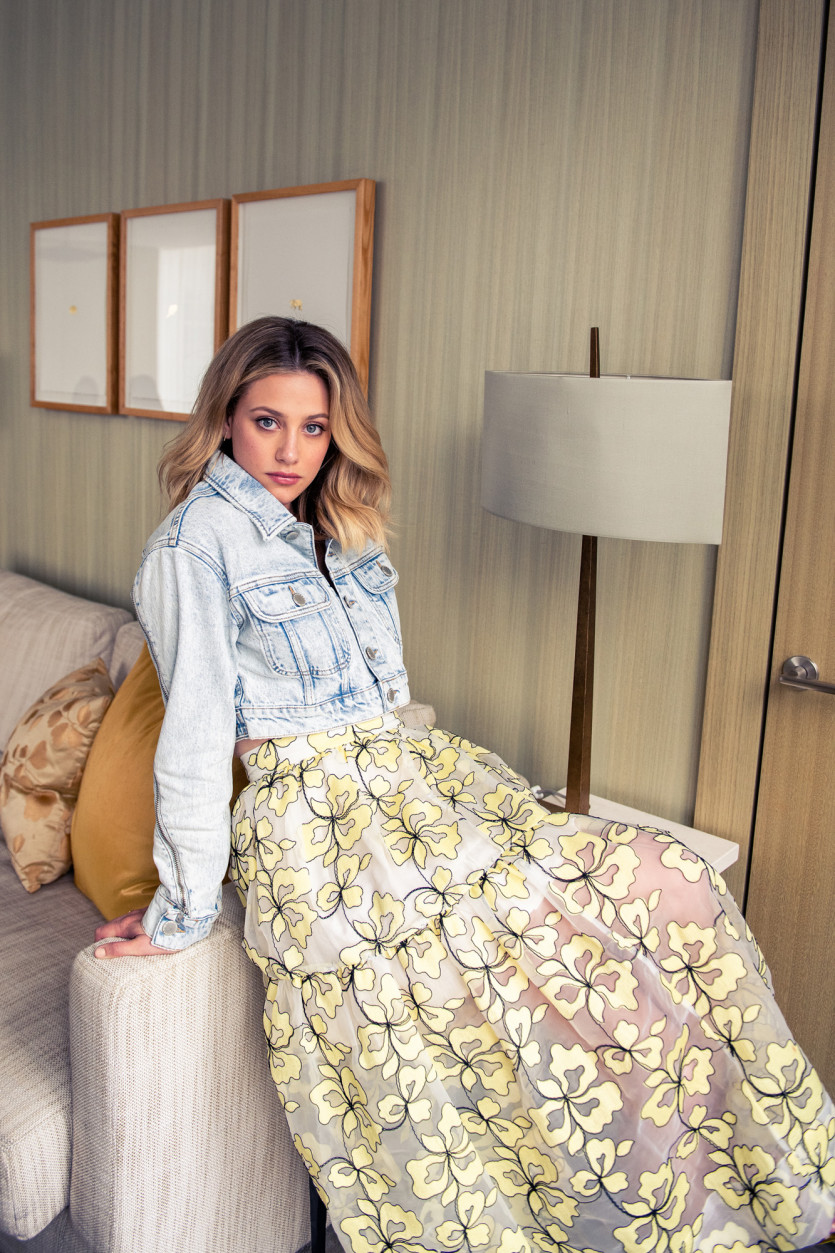 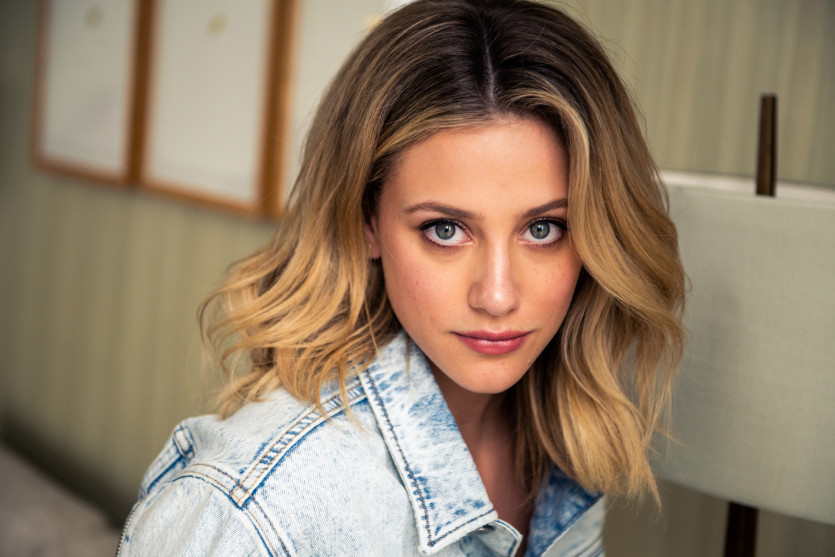 What made you want to get involved in Hustlers?

“It was so well written. Lorene [Scafaria] is so talented. When I first read the synopsis, ‘big hustlers’ popped up in my inbox, and I was like ‘OK?’ and then it was like, ‘Strippers get revenge on Wall Street men,’ and I was like, ‘oh god, what is this?’ Then I saw Constance [Wu]’s name attached, and Jennifer [Lopez]’s name, and Lorene as the director, and then I was like, ‘This is actually something. The synopsis is not doing it justice here.’ Even today, the trailer doesn’t do the film justice. You think you have an idea of what this movie is going to be, [that] it’s going to be a party for an hour and a half, but it’s really not like that. You get an hour of a nice party going on, but after that it gets really intense and emotional. [You] realize that you’re actually getting stories of these women and who they are. It’s not just like, ‘Oh, it’s a movie about strippers,’ it’s a movie about women who strip. You watch the film and you’re like, ‘Wow, that movie was about women and this sisterhood that they are in, and they’re trying to fend for their families and themselves.’ It’s a good story.”

The costume design [in this movie] was pretty incredible. Was there one look that you absolutely loved?

“To be honest, I kind of forgot the movie took place in a different time period when I arrived to my fitting. I guess I wasn’t really sure what to expect. Then I got there and I was like, ‘Oh my god, we’re traveling back in time to when I was in middle school!’ I was a little too young at that time to be wearing those bodycon dresses from Charlotte Russe and Guess. God, it was so trippy to see just how much the fashion has changed, and Mitchell [Travers], our costume designer, blew it out of the water. He was incredible and had so much work to do but somehow pulled it off. I walked in [for my fitting], and he was like, ‘I think we want [to do] sweet and innocent, but also trash.’ He said it in such an of course kind of way. We’re playing with 2013, and Mitchell called it ‘slutty Hannah Montana’ because [it was around the time] Hannah Montana was on, and [our costumes were similar to] the clothes from that time, with an added edge and sexiness to it. It was really fun. Awful jewelry [though]…the cheapest. I’d put it in my ear, and it would fall apart. I was like, this is perfect.” 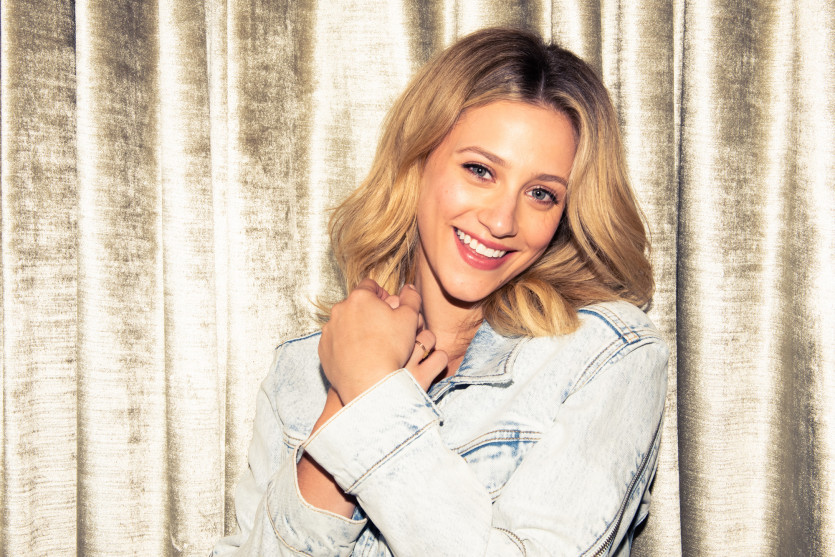 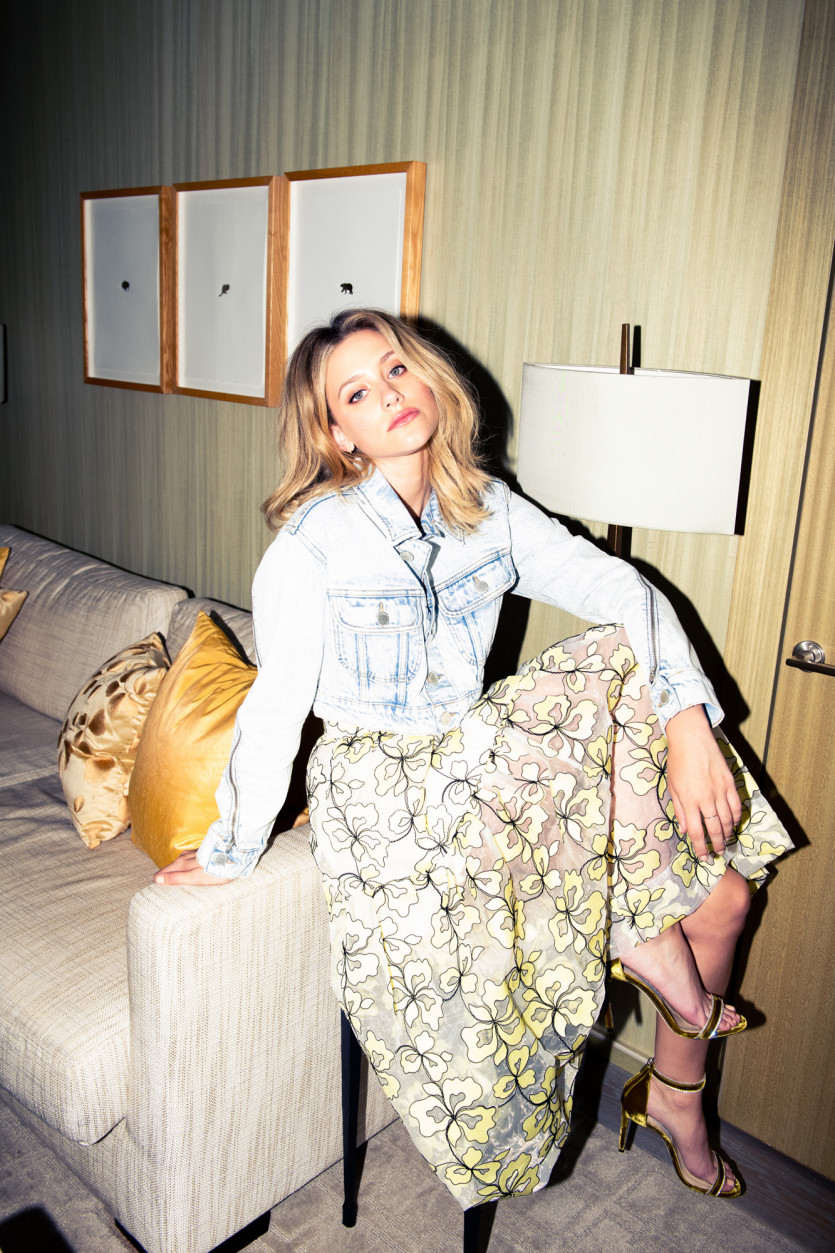 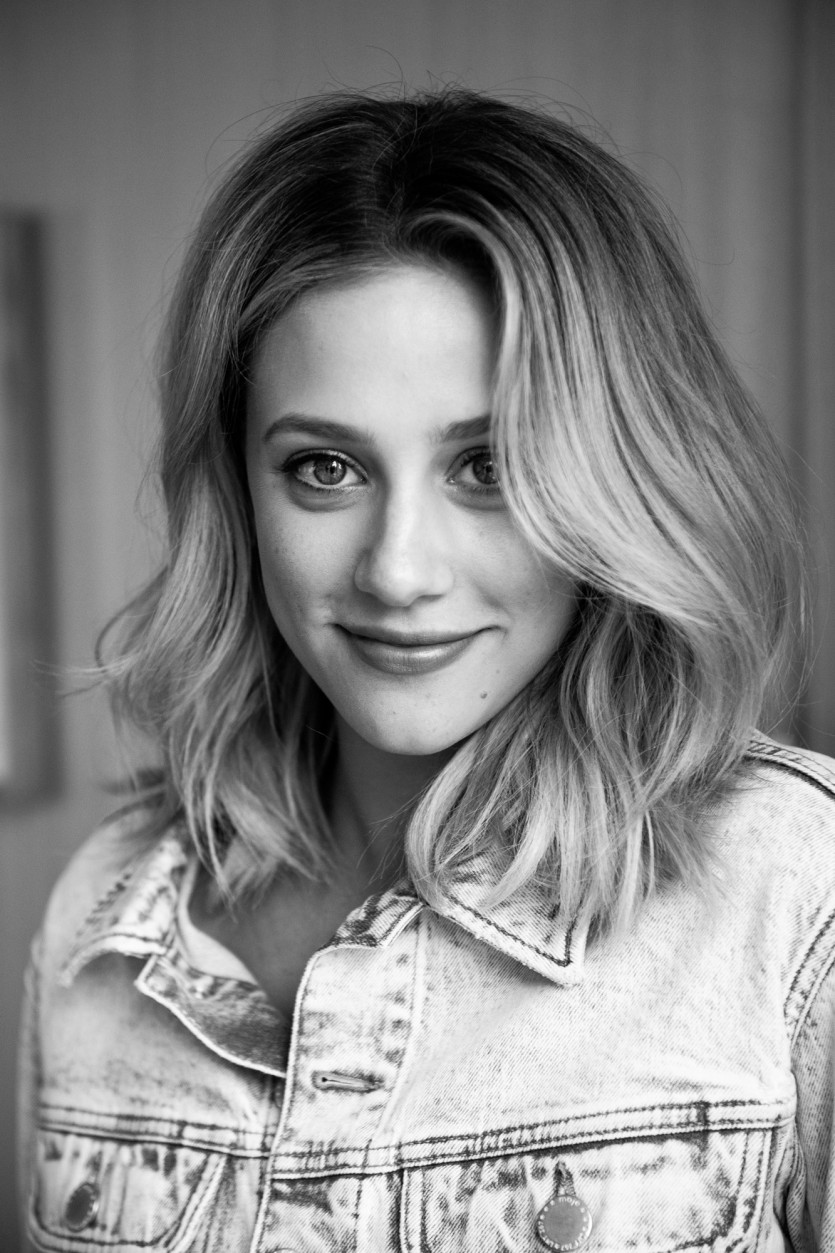 Ha! That jewelry that would turn your skin green or blue:

“It was just the best discount bodycon dresses money can get.”

Was there a look you just refuse to wear from that era?

“I refused to wear the hip-hugger jeans.”

The low-low-rise and muffin tops?

“It truly mortifies me that I wore those. Obviously I wore them in middle school. My mom sent me a picture of [myself] wearing those pants the other day, and they are literally like you’re about to see my vagina. It’s right on the cusp. And my mom goes, ‘Where is your crotch?’ She sent me that photo because there is like thismuch space between the top of my jeans and my legs. I was like, ‘I truly don’t know. I couldn’t tell you.’ All I know is [I was] 13, so I clearly didn’t have any love-handles going on—nothing to grab on to, I was like a stick. So it worked at that point, but Mitchell made me try on a couple [pairs], and I was like, ‘No, don’t do it.’” 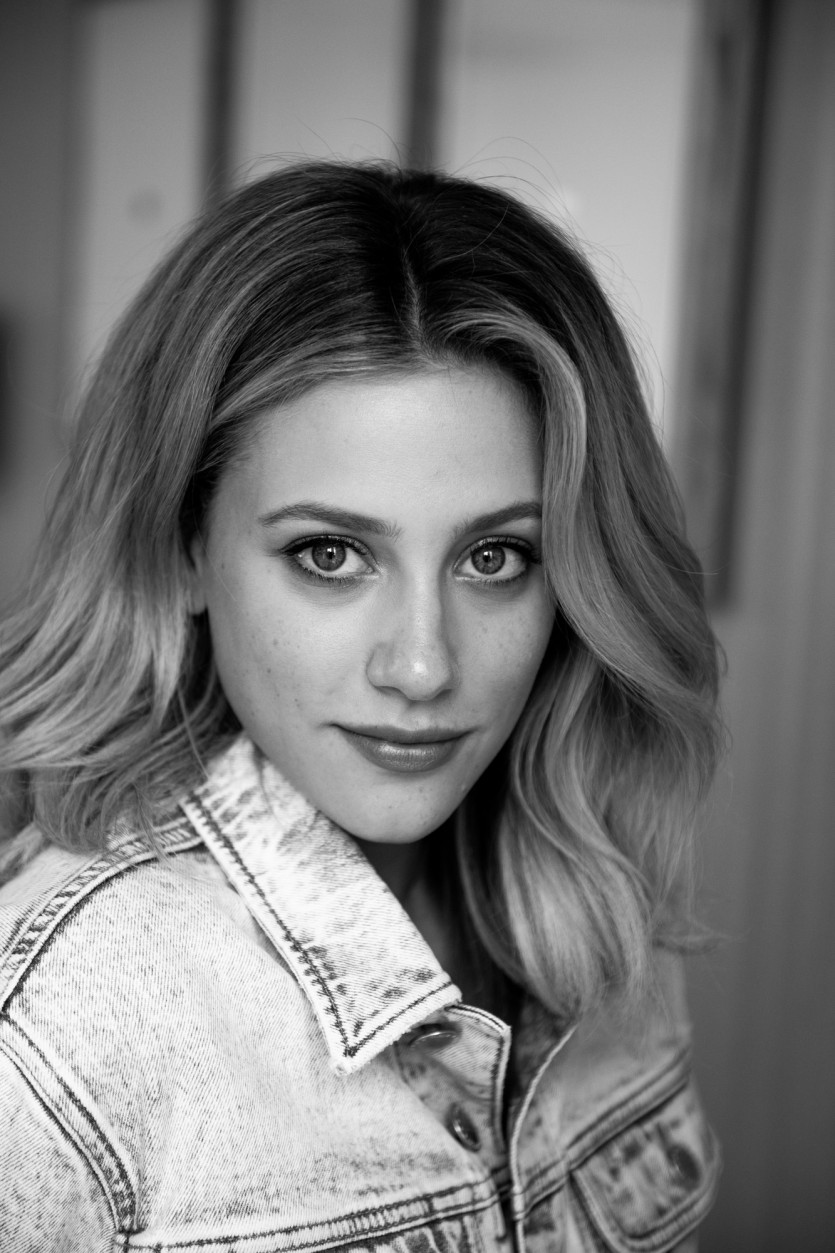 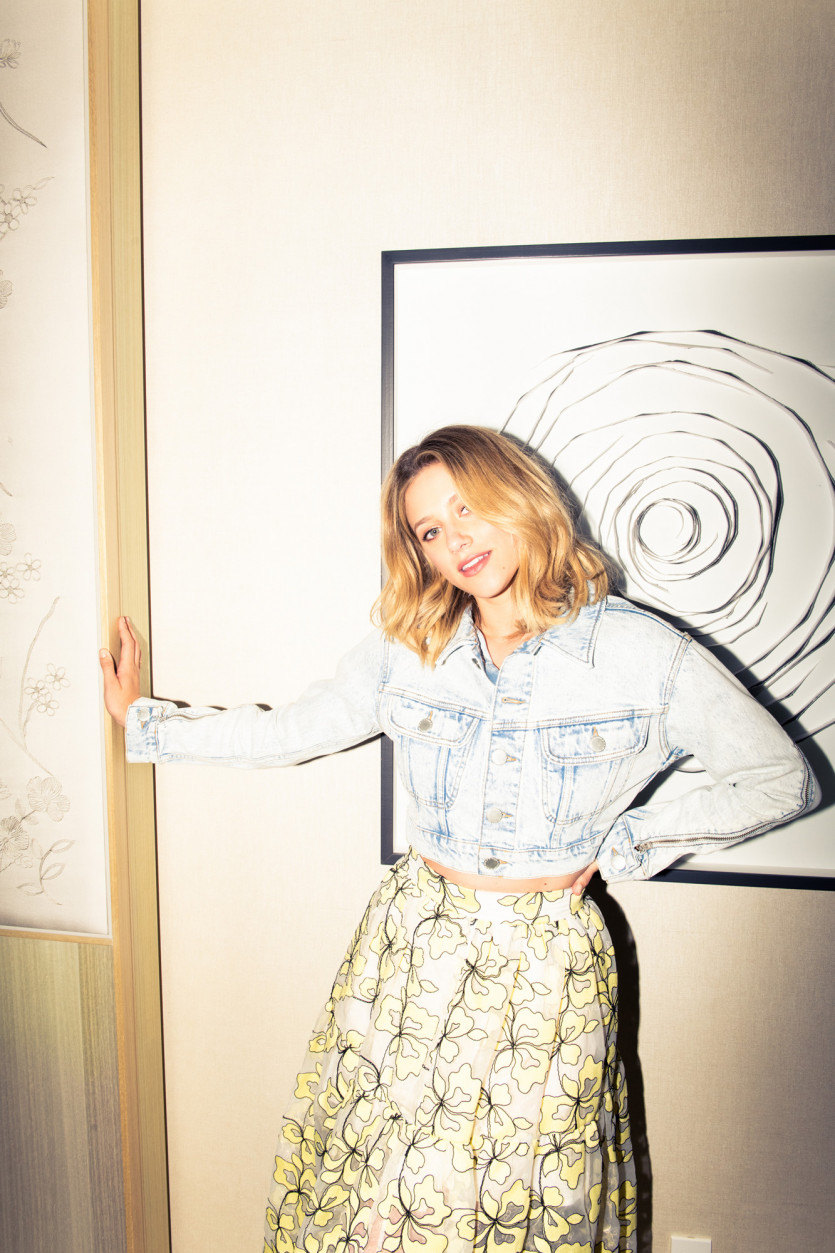 “My mom goes, ‘Where is your crotch?’ She sent me that photo because there is like thismuch space between the top of my jeans and my legs.”

What about the bodycon dresses?

“I don’t wear bodycon dresses ever. So, no. I really don’t think I would want to wear anything that I wore in that movie in my life. Even walking from my trailer to set, to the bar where we were filming or the strip club, I felt so self-conscious about the way I looked because it was so over-the-top. I had blue eyeshadow on…horrifyingly blue eyeshadow. It felt so out of my comfort zone. It was kind of insane because I’m very minimal. Especially day-to-day, I don’t wear any makeup. So it was a whole other world to be glammed and dolled up so much every day and to have my boobs on display all the time. It was quite a different experience. I’m more conservative than that.”

Your character has a pretty adverse reaction to stress, but she’s made it so endearing. Was it hard to film all those vomit scenes?

“People [would ask], ‘Are you nervous?’ I don’t think I was. It was more so like, here goes nothing! I don’t know what to expect. I’ve never had to do this before. I mean it was funny, I think Lorene said ‘Poor Annabelle’ like, eight thousand times while we were filming.” 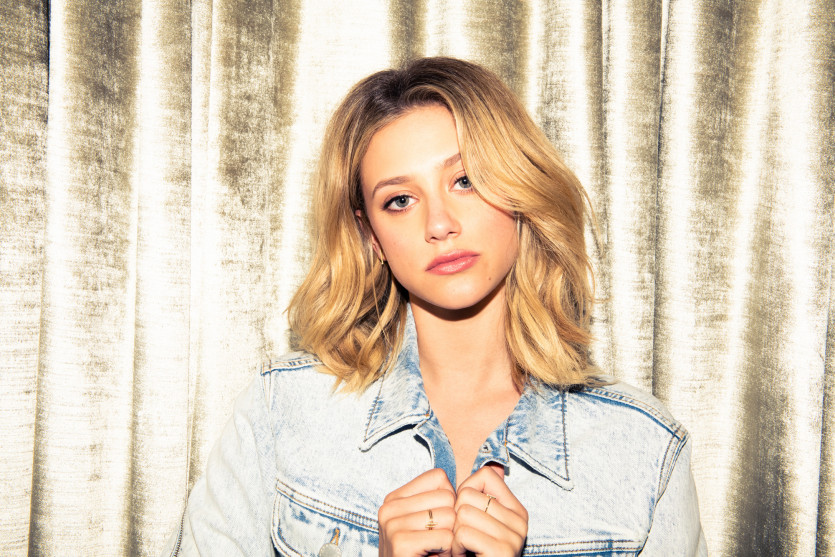 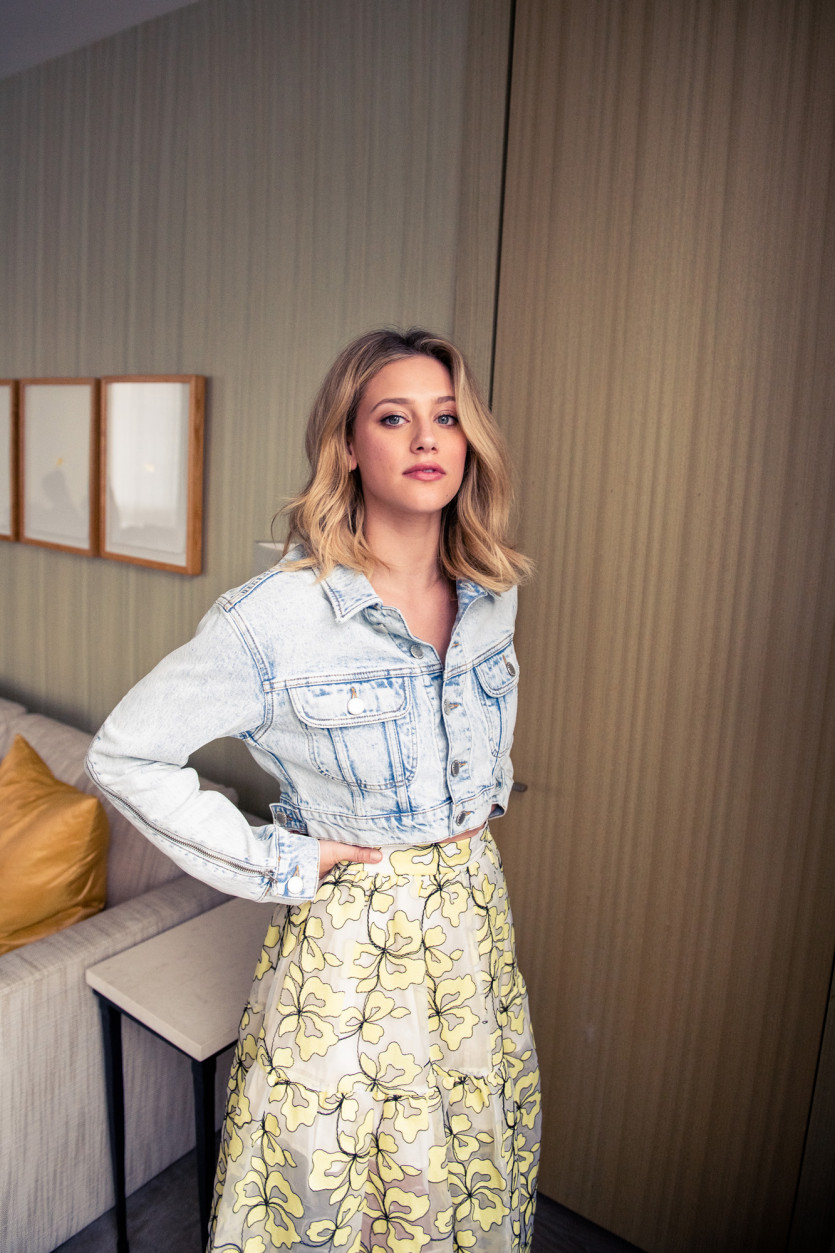 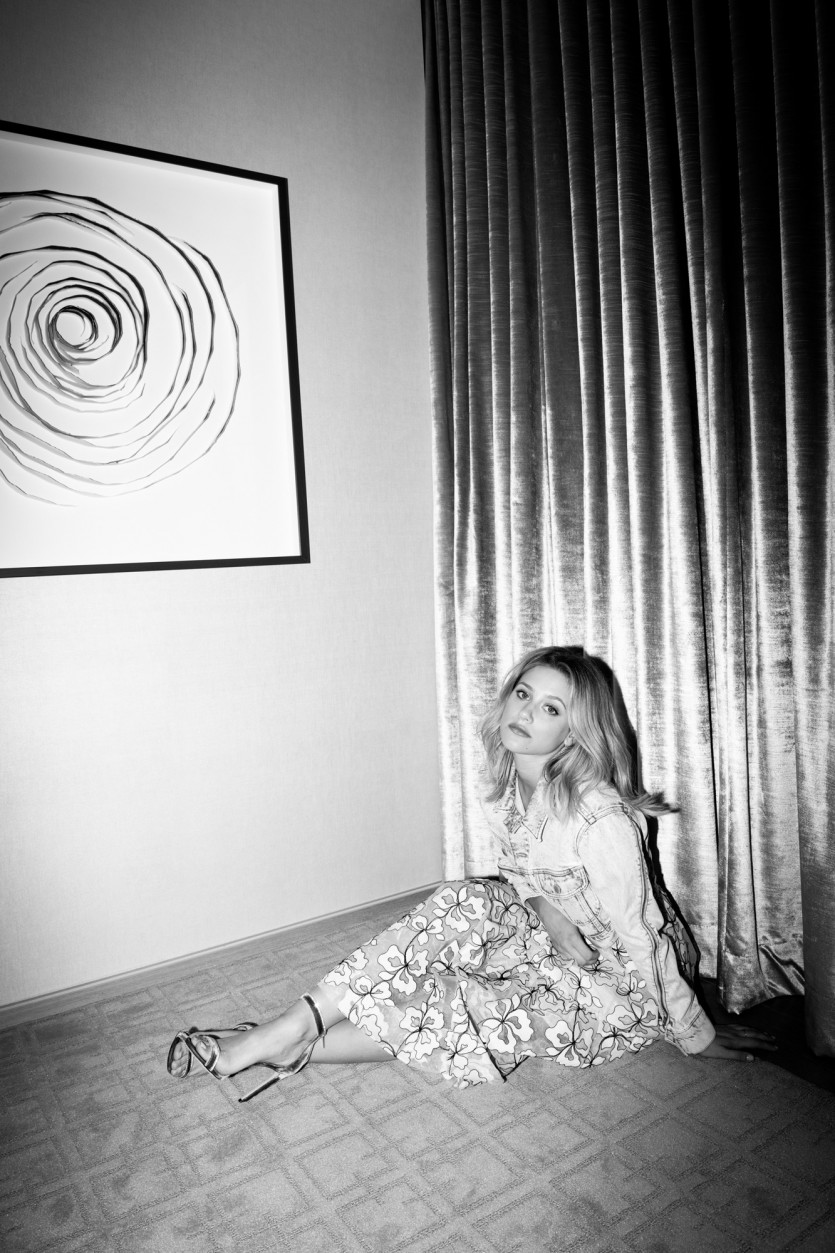 “She’s so young and sweet. It’s such a genius way of reminding the audience that she’s so young. Instead of being like, oh yeah, she’s the baby of the group, or she’s new to this, or she got pulled into this. That story is told by her vomiting because she’s just overwhelmed. I don’t have that reaction when I’m overwhelmed, but I can appreciate the people who do and how unfortunate it is. It was definitely an experience.”

What is fake vomit made out of?

What day on set sticks out in your mind? 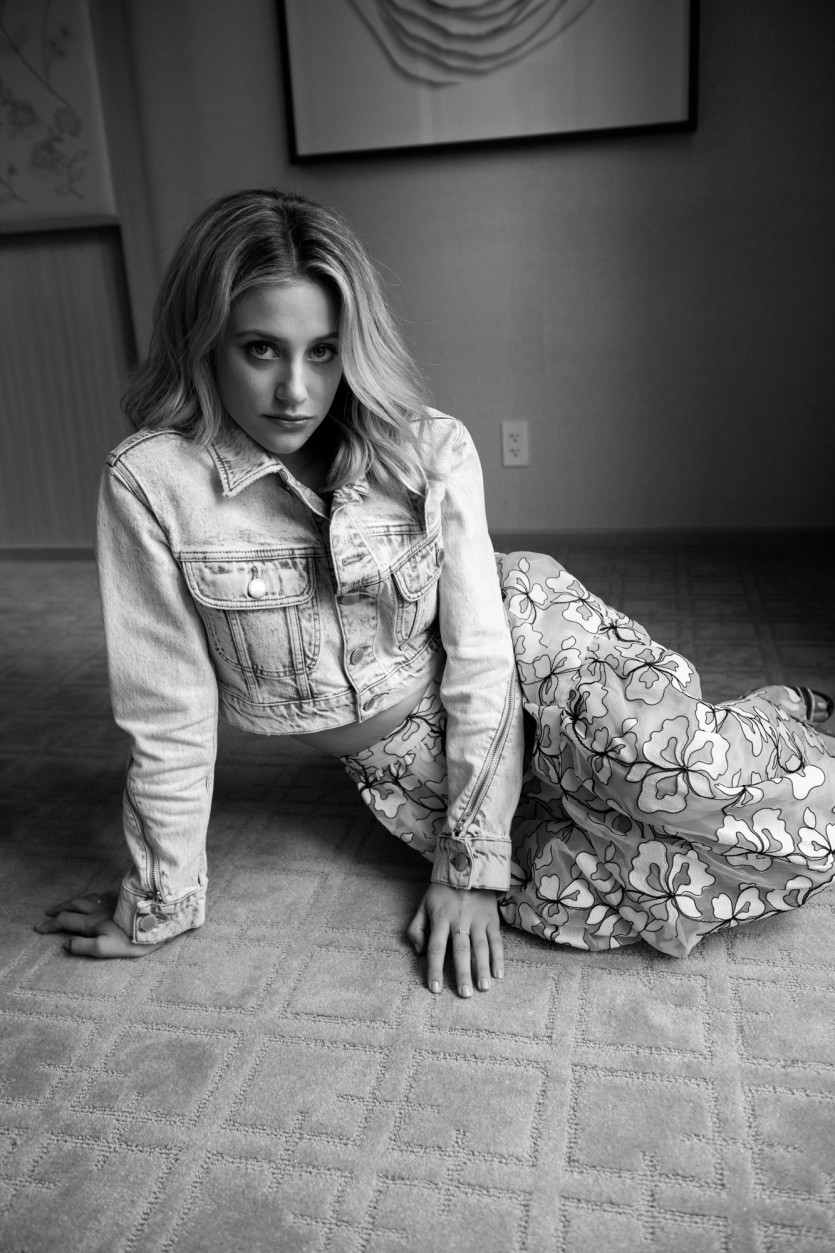 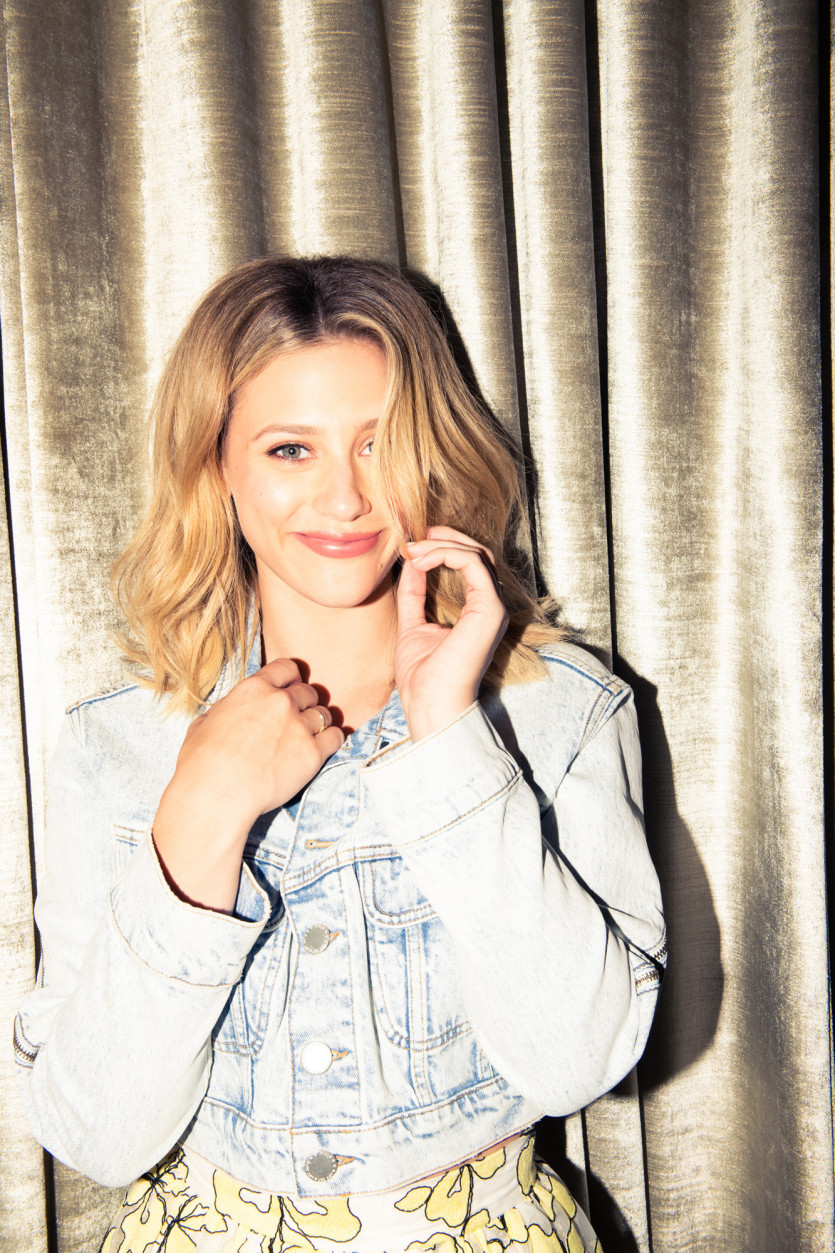 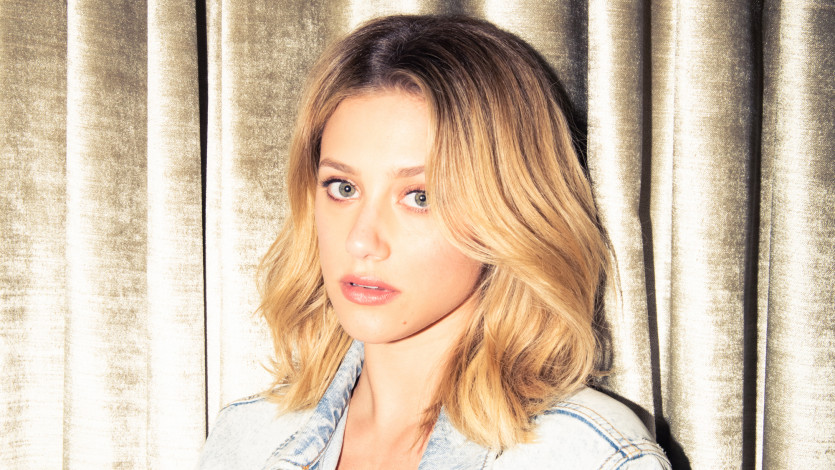 “Look, clearly I’m not good at dancing or trying to look good. [I] was just trying to have fun, like how you would drunkenly dance with your friends. So it’s more so like, God, please don’t watch that and think I’m trying to look good dancing. It was fun in the moment, and it was a really cool and special experience.”

I heard you’re pretty good at special-effects makeup. What are you going to be for Halloween?

“I am! Oh my god, I haven’t done that in a really long time, actually. I kind of went from special-effects makeup to face painting. So I’ve done a lot in the past. Now I don’t really have the time, which sounds so stupid, but I really don’t. It takes a lot of time to do those things. I think I’m leaning in towards a character for Halloween. I think I’m going to do it with my boyfriend, Cole. I don’t want to spoil it if it’s not going to happen, but it’s a TV duo.”

“No special effects this year, but maybe a wig.”

Danielle Macdonald Is on the Rise
Eiza González on Being Bullied & Dating in the Limelight
On the Brink of Her First Major Role, Sydney Sweeney Has Hollywood Hooked