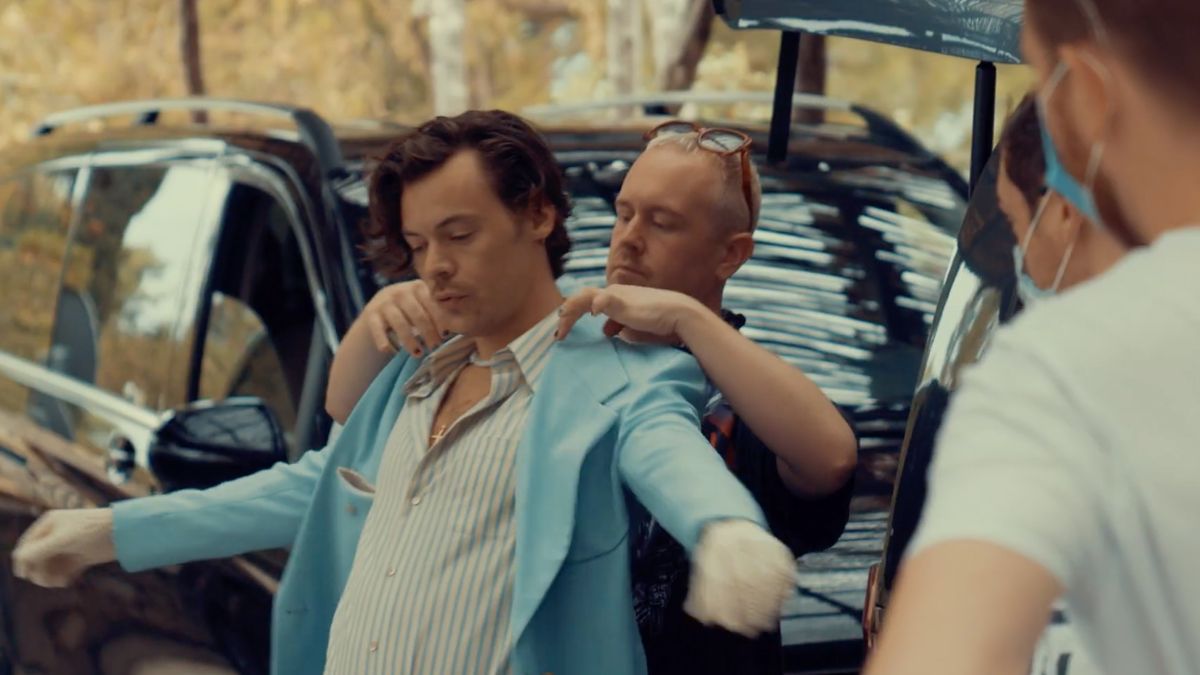 He’s challenging the traditional notion of red-carpet glamour with a healthy dose of fantasy.

Camille Freestone
On an unassuming Thursday last November, stylist Harry Lambert decided to indulge his sartorially deprived following with a visual rendition of what could have been—all of the red-carpet looks Emma Corrin was planning to wear for The Crown’s (now virtual, if not canceled) press tour. Lounging around in our homes clad in shades of grey and variations of stretchy pants, our minds were ripe for the taking. After months of virtual awards shows and canceled events, the world would take any semblance of the red carpet, even if it was simply an image from a fitting. But this was more than just that. The looks were, for lack of a better phrase, really, really cool.

Photo: Courtesy of Harry Lambert
In one photo, a fresh-faced Emma Corrin donned a structured black Christopher Kane minidress boasting a striking cutout which revealed contrasting pale flesh down the middle of her chest. Another showcased a pastel Loewe confection that challenged society’s construct of the body’s silhouette. A third, a sultry Nensi Dojaka slip with spindly, web-like straps and corresponding tights laced down the front of the leg. These were looks (and designers) typically reserved for the pages of progressive fashion magazines—Dazed or Garage—and Lambert found them a home on the red carpet on the body of a major star for the world to see.

In retrospect, Lambert began his career at those very magazines. Growing up a couple hours’ drive from London in Norwich, he recalls not so much a penchant for fashion as an industry but a deep-seated love of clothing. “I was never one of those people that can say, ‘Oh my god, I was flipping through issues of Vogue every day,’” but he found joy instead in obsessing over what he wore and dressing the mannequins at his local charity shop. In terms of where that love began, “the only thing I could think of is my mum used to play me a VHS tape of Madonna’s music videos, like all the time.”

Photo: Courtesy of Harry Lambert
While at university in Kent, Lambert had a go at photography—it didn’t stick, but it did put him in circulation with the fashion department. It was there that Lambert found friends who coaxed him out of his shell and an introduction to the industry. The budding stylist and his new comrades worked in charity shops, trading their work in editorial imagery for access to an impressive collection of vintage. “It started blossoming from there, really.” He began interning at i-D and Tank while in school, then later British Vogue and with a Vogue stylist. “That’s where I started to realize that this is something that I could do potentially as a job.” After two and a half years assisting a menswear stylist, Lambert’s career began to take shape. He now works with two celebrities, each of whom are making some of the most exciting fashion choices on the scene today: Emma Corrin and, of course, Harry Styles.

“I always think, what are the brands that fit with their personality, their style? I’m not talking about just finding a big fashion label, but trying to build up a roster of brands that really suit them.”

Lambert still views his work in a more editorial light versus simply celebrity styling, but with more input from those wearing the clothes. For those in fashion, Lambert serves as something resembling Corrin and Styles’ market editor. The client ultimately chooses what they wear, but it’s Lambert’s job to sift through everything out there and to not only find the best, but also bring them options that they might not have known about—it’s a collaboration. Especially when working with emerging talent, you are crafting their identity through your sartorial choices. “I always think, what are the brands that fit with their personality, their style? I’m not talking about just finding a big fashion label, but trying to build up a roster of brands that really suit them.” Aside from the aforementioned brands, Lambert and Corrin have procured looks from British designers Simone Rocha, Richard Quinn, and Rejina Pyo.

Photo: Courtesy of Harry Lambert
The red carpet tends to be monopolized by a handful of powerful, recognizable designers, so it’s refreshing to see lesser-known names make it outside the pages of niche magazines for a moment in the mainstream spotlight. “Sometimes I think people forget to wear them for red carpets,” Lambert hypothesizes. “They only think, These are the red carpet brands, but they’re not. There is just so much good stuff out there.” He is lucky enough to work with clients that see beyond notable names, as well.

In the case of Corrin, “she has a really strong point of view, and she’s really fucking cool. I think people are sometimes quite quick, when it’s a young, pretty girl, to put them in a box.” When the young star with elf-like features and an uncanny resemblance to Princess Di is clad in a full-sleeved Chopova Lowena number or head-to-toe Charlotte Knowles ensemble, she becomes interesting, three-dimensional, before she even opens her mouth. “I was lucky to get to know her as a friend before a work colleague. She’s not scared to take a risk or be ugly.”

“I think the world has seen enough plain black tuxes and pretty dresses.”

“I think the world has seen enough plain black tuxes and pretty dresses,” continues Lambert. “I always see the red carpet, depending on the event, kind of like an editorial,” he explains of his journey to divorce the notion of classic Hollywood glamour. “You do have that opportunity to be a bit more fun and creative with it. It can have a bit of fantasy, and I think that’s really important.” His progressive mindset is mostly accepted now, but it took the world a minute to arrive there, especially in the case of menswear.

Photo: Courtesy of Harry Lambert
Lambert recounts dressing Styles in a floral Gucci suit for the 2015 American Music Awards, and the explosive reaction that followed. “Now I look back, it just feels kind of normal. Isn’t it weird to think five or six years ago, something like that could cause such a stir?” But that was still in the era of the red carpet “Worst Dressed” lists—a faux pas that fashion has, for the most part, since retired. “I remember the floral suit on the Fashion Police and them calling it curtains. We found it funny, but I know for some people, that would hurt them. It’s good that’s gone now.” Laughing, he continues, “If they still did that, I’d be on the ‘Worst Dressed’ list. I can’t dress myself to save my life.”

“I remember the floral suit on the Fashion Police and them calling it curtains. We found it funny, but I know for some people, that would hurt them. It’s good that’s gone now.”

Since then, the duo has progressed to select looks that have even less regard for gender norms and dated expectations. Most recently, Lambert consulted on stylist Camilla Nickerson’s highly polarizing American Vogue shoot that depicted the musician in a custom Gucci gown. “If that shoot offended or upset people, good, and if it made people feel better about themselves, good. It created a dialogue, and I think anytime fashion creates a dialogue, that’s positive.” In this case, the dialogue actually overshadowed the use of younger designers like Emily Adams Bode and Harris Reed—a rarity in major magazines.

Photo: Courtesy of Harry Lambert
It’s one thing to create a dialogue in fashion, but to create a dialogue about fashion that exists outside the industry is no small feat. Lambert’s tactics have drawn massive attention—I’ve seen his work shared countless times by friends of mine who operate completely outside fashion. “When I think back on what is memorable, it is always when someone takes a risk and does something a bit different,” he posits. A delicate balance, Lambert toes the precarious line between shocking purely to shock and surprising his audience with a purposeful sartorial message.

Yes, I was eagerly anticipating the interview because of my admiration of the British fashion powerhouse’s work, but I was pleasantly surprised by how much I enjoyed our conversation. We laughed continuously, gabbing about old episodes of Fashion Police and iconic collections—JW Anderson’s fall 2013 men’s ruffled shorts, in particular. “I always believe, if you put out good energy in your life to people, it will eventually come back,” states Lambert.

You can tell his work excites him too, which is a luxury in any industry. The pandemic, which put a pause on this crazy industry that never slows down, has only fueled his affinity for fantasy. “I’m sitting here in my studio and I’m looking at eight crazy wigs for a shoot I’ve got this weekend. I’m just so excited to be able to start making fun, creative stuff again.”

Zerina Akers Is Helping Black-Owned Businesses Take Center Stage for Years to Come
The 10 Most Jaw-Dropping Moments of 2020
The Harry Styles Effect: Pearls Are Back
More From the series Fashion

Positively Conscious: 24 Fashion Purchases You Can Feel Good About

The Coolest Handbags to Buy This Season