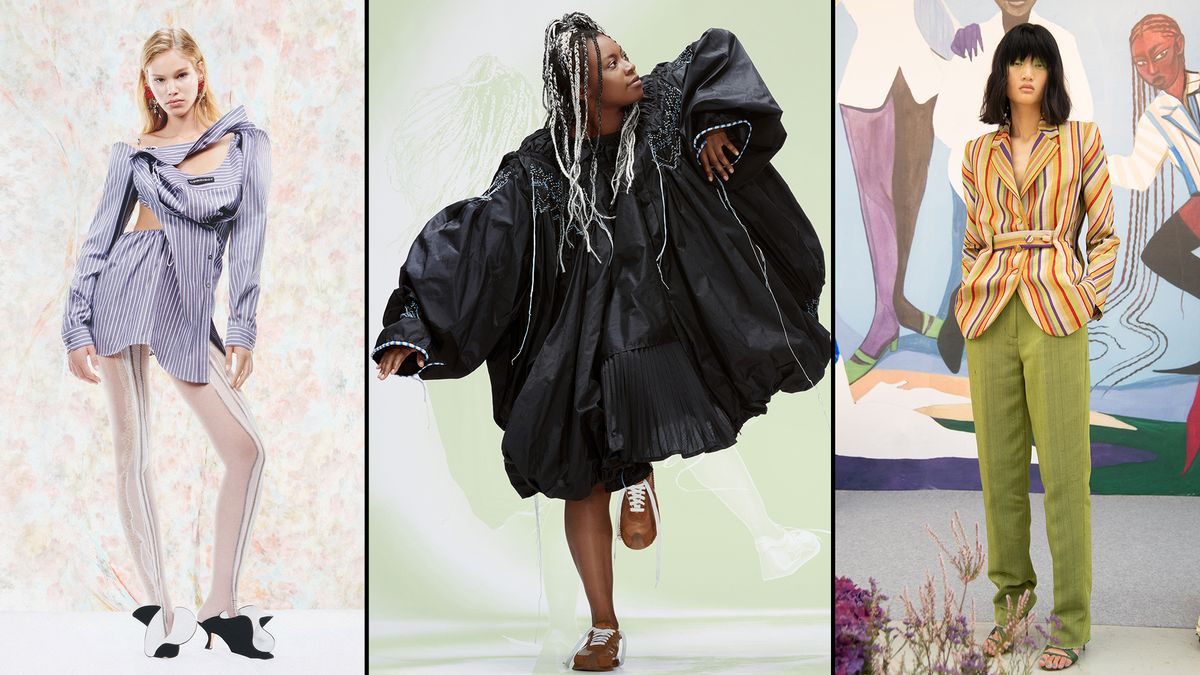 Paris Closed Out Fashion Month with an Ode to Dressing Up

With futuristic silhouettes and a strong dose of glamour!

Camille Freestone
Graphic
Rachel Pickus
This spring ’21 season, many designers across all countries have presented unique alternatives to the traditional runway show. Runway substitutes have been a tricky subject to grapple with, but Jonathan Anderson’s “show in a box,” the concept of which he has used for the two houses he designs for (Jonathan Anderson and Loewe), has been a fan favorite.

To those who would normally attend his in-person Loewe show in Paris, he sent a rectangular box which housed wallpaper that mimicked the fabric of his collection, as well as life-size posters of the looks along with glue and a paintbrush to help adhere everything to your wall. “While we are in a situation where travel is restricted, I still wanted the viewer to participate,” explained Anderson in the video segment that accompanied his lookbook. “They’re forced to be creative. They’re forced to interact.”

Other than Loewe, Marine Serre (who presented a very on-brand dystopian video), and Maison Margiela (who took us through the entire collection in detail), few houses in Paris actually parted with the runway aspect of the fashion show. Catwalks were the norm of the French city, each with a handful-ish of guests sitting socially distanced style. CHANEL, known for their grand productions, retained their typical strut through the Grand Palais, this time with the brand name displayed like the Hollywood sign, but overall with slightly less grandeur than the average show.

Other than the occasional runway mask, the clothes didn’t really look like they were produced for an audience in a pandemic, as was the case in some of the other cities. Designers reminded us of how much fun it was to dress up with oversize shoulders, shocking hues, and even glitzy sequins. In Matthew Williams’ debut collection at Givenchy, where he replaced former designer Claire Waight Keller, he toyed with edgy hardware, tailoring, and futuristic silhouettes, the latter of which we also saw peppered through other collections with sharp shoulders at Balmain and out-of-this-world shapes at Rick Owens.

Kick your heels up and relax because Paris is the last of the spring ’21 fashion weeks. On that note, here are the most exciting trends we saw.

Glitzy fabrics reminiscent of the disco era, from sequins to lamé, peppered the runways this season. It seemed designers from Isabel Marant to Paco Rabanne thought their consumers (and viewers) were in need of a heavy dose of escapism.

From deconstruction to exposed stitching, designers found ways to divert your attention from the actual garment to the process of construction.

It’s not the first time this trend has popped up this season, but netting was shown throughout a pretty diverse range of collections. From Balenciaga to Dries Van Noten, netting was shown both on its own and layered over other contrasting materials.

We love when designers show a flash of skin in a very unobvious place—it’s a little more intriguing than your typical plunging neckline or thigh-high slit. We saw hip cutouts at Gabriela Hearst and an entire back reveal that crept into the waistline at Hermès, which added a cool contrast to the ’90s-era sheath silhouettes.

It’s become trendy to create an actual print, either out of your logo or a symbol that represents your brands à la Marine Serre and her moons—although she has reinterpreted it for the current season. Olivier Rousteing resurrected an archival print at Balmain, while Miuccia Prada created a logo-based print at Miu Miu.

Another trend for fashion escapists, pink brought a smile to our faces on many occasions this season. Designers ranging from CHANEL to Natacha Ramsay-Levi at Chloé sent models clad in the rosy hue down the runway.

Pantsuits have been en vogue for quite a few seasons now, but this season, the masculine ensemble accentuated one highly feminine detail: the waist. The belt was key here to give the pantsuit a fresh look for spring.

These silhouettes went beyond basic shoulder pads with a futuristic spin on the typical exaggeration. From Balmain to Givenchy to Rick Owens, outrageously strong shoulders emblazoned powerful ensembles.