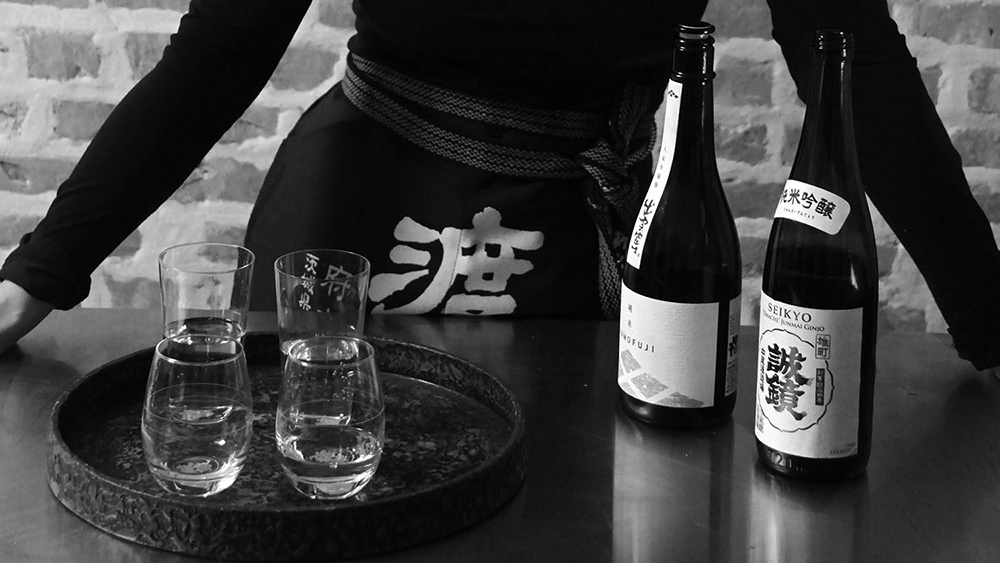 Move Over, Wine—Sake Is Our New Go-To Beverage for Fall

Ryan Mellinger of Joto Sake shares the history of the drink and the best food pairings for different varieties.

Although some of us might have some experience with sake at this point in our lives, it’s not always as widely discussed in the world of alcoholic beverages compared to, say, beer, wine, or liquor. But the Japanese beverage has a rich and complex history that is worth understanding. For centuries many people in Japan used sake as a form of celebration, a way to pay homage to Shinto gods and show friends and people in their communities hospitality.

As a novice sake drinker, you may wonder where to even start. To uncover more details about the drink, we turned to Ryan Mellinger, Joto sake manager for the Northeast and North Central US. Mellinger has her WSET Level 3 in sake (an advanced-level qualification for professionals working with sake) and travels around the country to teach restaurateurs, sommeliers, bartenders, and chefs about its versatility and delicacy.

To start, sake is a fermented rice beverage that originated in Japan. In Japanese, sake is known as nihonshu (nihon means Japan, and -shu means alcohol) and is the country’s national alcoholic beverage. As hard as it may be to choose a sake from a list full of beverage options, every single sake on the market today consists of four basic ingredients—“rice, water, yeast, and koji,” says Mellinger.

Sounds pretty simple, right? Well, not exactly. As Mellinger explains, “It’s a very elegant drink, and there [are] not a lot of components to it, but to make it well is very difficult.” Given that this is a fermented product that uses sugar, yeast, and bacteria, it takes a highly skilled sake producer to know exactly which ratios of ingredients to use and how much time is involved in producing a drink that’s safe for consumption.

Unlike wine or other alcoholic beverages that use fruits, the sugar that feeds the bacteria during fermentation comes from the rice’s starches. Given that rice is the main sugar in the fermentation process, as opposed to zesty or tart fruits, Mellinger explains, “it’s pretty mellow and easy on your stomach. Sake has lower acid than wine, and there are no tannins. So you don’t get any of those robust, stringent characters in the same way [you would while enjoying a glass of wine].”

It’s also a common misconception that sake is in the same category as spirits such as mezcal or whiskey. Mellinger explains that no distillation process occurs when making sake, meaning that you are not drinking an alcoholic extract from the ferment (which is what you are drinking when you enjoy spirits with higher ABV percentages). Instead, sake is brewed, similar to the way beer is made.

Sake does have a higher ABV percentage than wine, but not by much. Whereas wine has an average ABV of about 10 to 15 percent, sake generally has an ABV of about 15 to 20 percent. Says Mellinger, “If you are enjoying a well-made bottle of sake that is about 15 to 16 percent [ABV], then you should be able to enjoy it just like a glass of wine and sip on it [as] a part of your meal.” So although you might see sake served in a smaller glass, it is appropriate to sip on and appreciate, not something to shoot back within seconds.

Below, find the many sake classifications and the recommended foods to pair with them.

Junmai: Junmai translates to “pure rice,” making this type of sake as simple as it gets. When you are drinking a junmai, all you are tasting is the byproduct of the fermentation of water, rice, yeast, and koji. This causes junmai sakes to have earthy and sometimes aromatic flavor. It’s also a great place to start if you’re new to the world of sake.

Honjozo: You may notice that these sakes’ flavor profiles are a bit more complex than your average junmai. Says Mellinger, “Honjozo means that there’s been a small amount of distilled spirit added at the end of fermentation,” which is not meant to up the ante on the ABV percentage, but rather to round out the flavors of the beverage. She compares the process to cooking and says, “[Adding spirits to sake] is like using alcohol when you’re making a sauce in the kitchen. If you add a little bit of alcohol at the end, [it’s] just to bring all the flavors together in your final sauce. The intention is not to have an alcoholic sauce; it’s to have a balanced, integrated sauce.” This makes the flavor profile of honjozo sakes dependent on the spirit added, resulting in fruity, aromatic, or even tangy flavors.

Nigori: Nigori translates to “cloudy sake,” and from a first glance, you will understand why. Given that sake is made from rice starch, the alcohol’s clarity depends on the filtration device used when the liquids are separated from the lees (the rice pudding-esque mash of fermented rice). When filtering junmais and honjozos, sake producers use extremely fine filters, resulting in clearer sake. Nigori sakes run through a coarser filter, meaning that more lees are present in the final bottle. This gives nigori sakes a cloudy appearance and a creamy mouthfeel. Mellinger recommends drinking this type of sake with fried, spicy, and pickled foods to balance the meal’s intensity.

Ginjo: Ginjo refers to the amount of rice polishing that happens before the fermentation process begins. Think about it this way: Brown rice and white rice both come from the same grain—white rice being polished, and brown rice not. This is why protein-rich brown rice is more nutritious to eat than white rice, which is mostly just starch. Yet, in the world of sake, where fermentation is dependent on the starches in the rice, having a higher amount of polishing provides more sugars for the bacteria to eat and ferment. Ginjo sakes refer to rice that is polished to 60 percent its original size before fermentation. This type of sake is great to pair with curries, roasted meats, and robust stews.

Daiginjo: Similar to ginjo, daiginjo also refers to the rice polishing before fermentation. Daiginjo sakes use rice that is polished to 50 percent of its original size, meaning that more of the white part of a rice grain is exposed during fermentation. Due to this, daiginjo sakes tend to be lighter, fresher, and have an added sweetness and aroma to their flavor profiles. Mellinger recommends pairing these sakes with “things that have a little bit more brightness to them, like salads, vegetable dishes, fish, and poultry.”

Since both ginjo and daiginjo refer only to the polishing of the rice before fermentation, and not the filtration or addition of spirits to the final product, you can certainly have a bottle of junmai daiginjo or honjozo ginjo sake.

Now, are these food and sake pairings the end all, be all of what you should enjoy with this classic Japanese drink? Certainly not. As Mellinger reveals, “I’ve had [daiginjo sakes] with a piece of grilled steak, and it’s just wonderful. So, unfortunately, or fortunately, you just have to get out there and start trying sake [to] see what you like.”