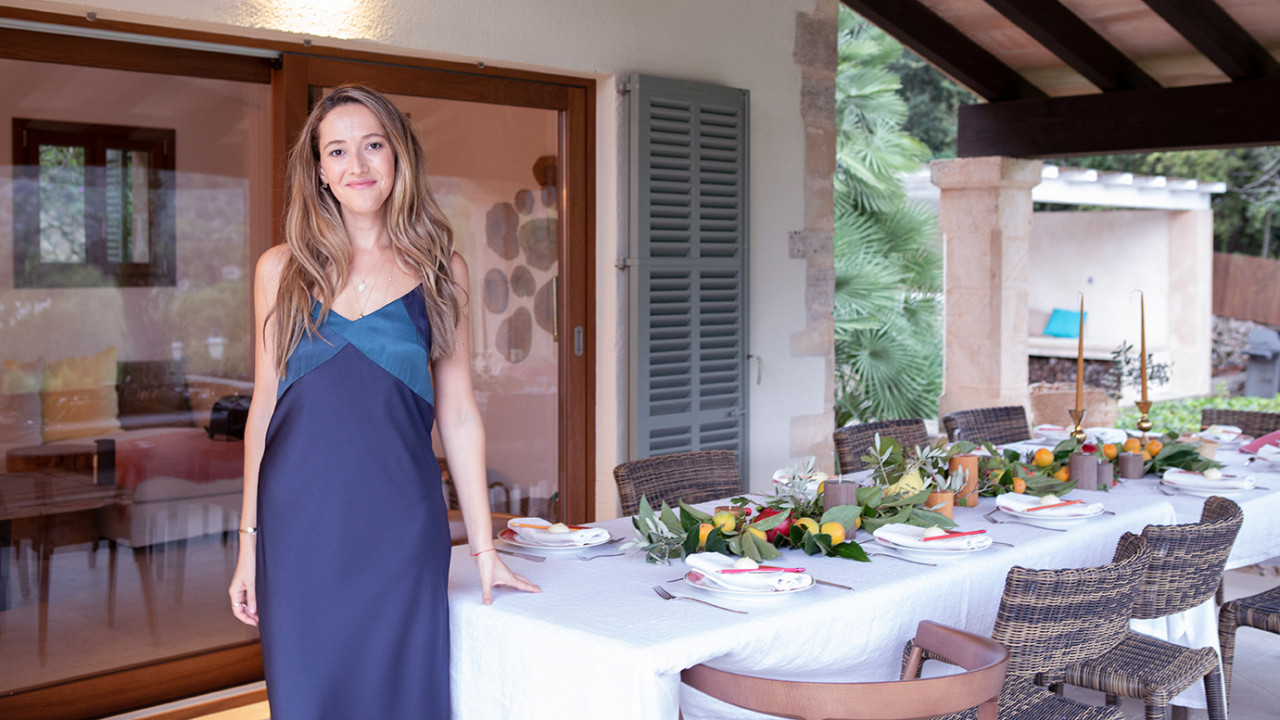 Shana Tovah in Mallorca: Ringing in the New Year and Reinventing Rituals

When New Yorker and Zahava founder Jessica Hendricks Yee and her husband, Patrick Yee, had their son Ezra in August of 2019, they made an unorthodox decision: It was time to travel.

While most new parents nest, within six months of having their first child, the Yees sold their apartment, put all their personal possessions in storage, and moved across the Atlantic to live in Madrid, Spain. It was early March. They planned trips to Portugal and Morocco and were excited to explore the culinary curiosities of tapas bars in their neighborhood Justicia.

However, 10 days after they landed in Madrid, the pandemic hit. Overnight, Spain instituted one of the most draconian lockdowns in the world in response to COVID-19, and the city of three million inhabitants was forced indoors. There were tanks in the streets and the local news was harrowing. The couple found themselves confined in their small rental apartment. They couldn’t go out except one at a time to the store, and couldn’t even take Ezra out for a walk. But worst of all, they didn’t have a network to help them navigate the crisis. 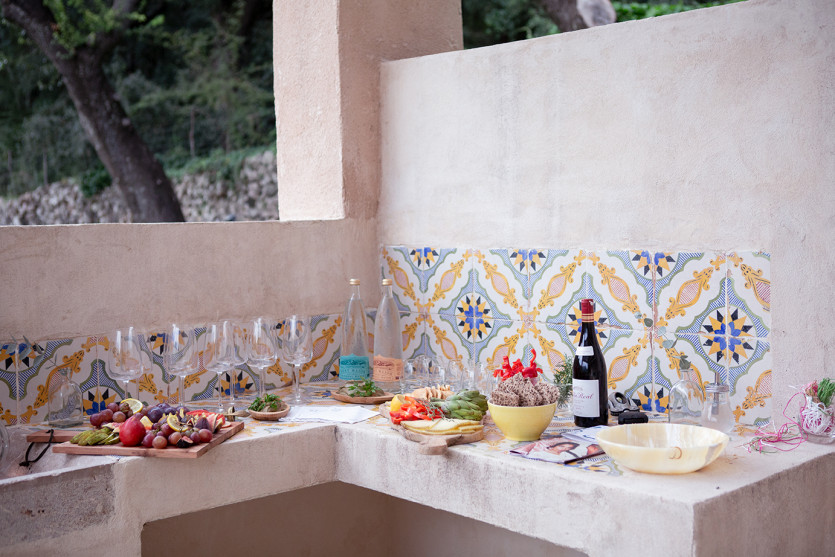 As the weeks of confinement wore on and the news in Madrid grew more dire, the Yees found themselves on a fortuitous journey. In the midst of a global shutdown, a network of strangers became their improbable community.

Every night at 8:00 PM, Jessica, Patrick, and Ezra would go out on their balcony and clap for healthcare workers along with their neighbors. Says Jessica, “It was moving and cathartic and powerful every single night. The magnitude of the pandemic made the distinctions of culture and country sort of melt away because of this shared human experience [that] has been so profound.”

One night after the clapping subsided, a woman on a balcony across the street from the Yees struck up a conversation. When she heard their story, she gave them her phone number and offered to help with anything they needed. Her name was Maite. A nightly ritual ensued of talking and laughing with this stranger, who quickly became a confidante and friend. 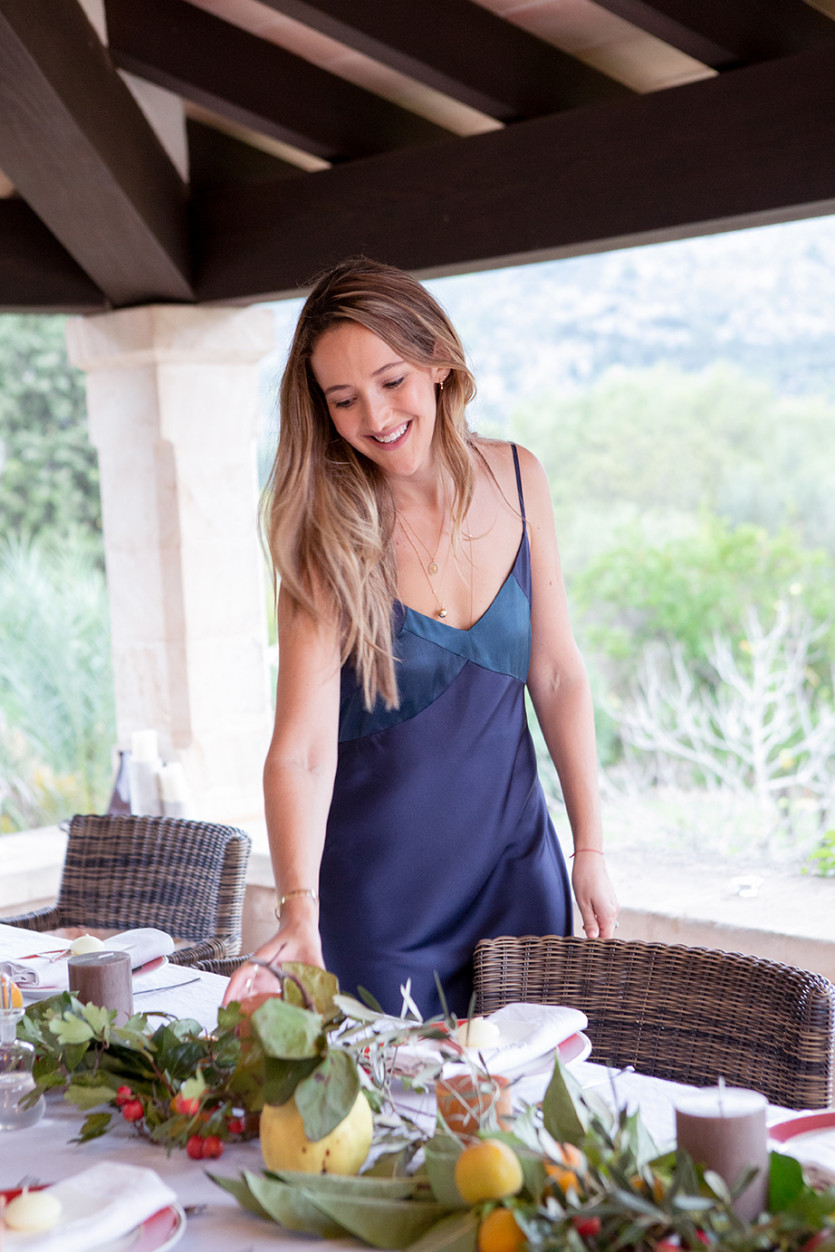 After 48 days of confinement, the lockdown lifted, and the Yees craved fresh air. They were restricted to travel within Spain, so the young family said goodbye to Maite, packed up, and set out for the island of Mallorca with the help of friends of friends they had never met who lived there.

In Mallorca they found themselves in the wild Northwest, living in an eccentric house with chickens running through the yard. The nightly clapping of lockdown was replaced with sheep bells ringing. It was the opposite of Madrid in every way. Mallorca managed to escape the pandemic with low case numbers, so the island offered the Yees a laid-back re-entry to the “new normal.”

Jessica reached out to the local Jewish organization where she met women from diverse backgrounds with surprisingly similar stories to hers. Through a network of friends, the Yees found themselves living the kind of life they had always fantasized about. Jessica explicates, “The Zahava Traveller’s Tokens were crafted to ‘transport you to another time and place’—and here I am, landed in this other time and place, with nearly all of the tokens living and growing around me right here on this very piece of land, from peacocks to pomegranate vines. It feels dreamlike.” 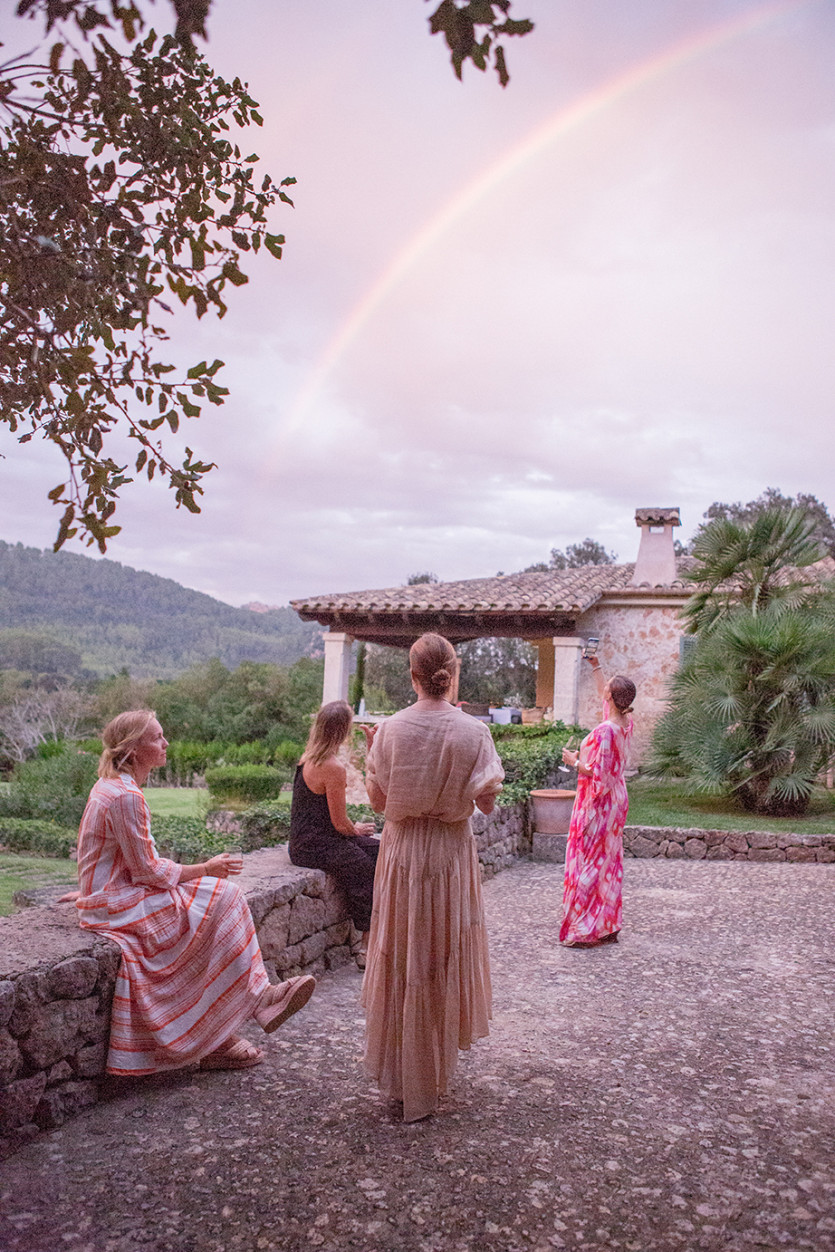 As summer turned to fall, the Jewish holidays became imminent, and the quandary of returning to the States weighed heavy on the Yees. Traveling might potentially put elderly relatives at risk, so she decided to stay put.

Looking for the silver lining in her first Rosh Hashanah away from home, Jessica decided to create a Shabbat dinner to celebrate her newfound COVID community. She organized an heirloom dinner of 10 women—the maximum number of people allowed to congregate for a party in Mallorca.

Each guest invited was asked to bring an item of sentimental value and a story to share. Jessica baked challah every day for a week preceding, perfecting a fluffy braided loaf to serve with the traditional honey and apples for the holiday meal. As a precautionary measure, she provided locally made masks and colored twine for each guest to differentiate drinking glasses. 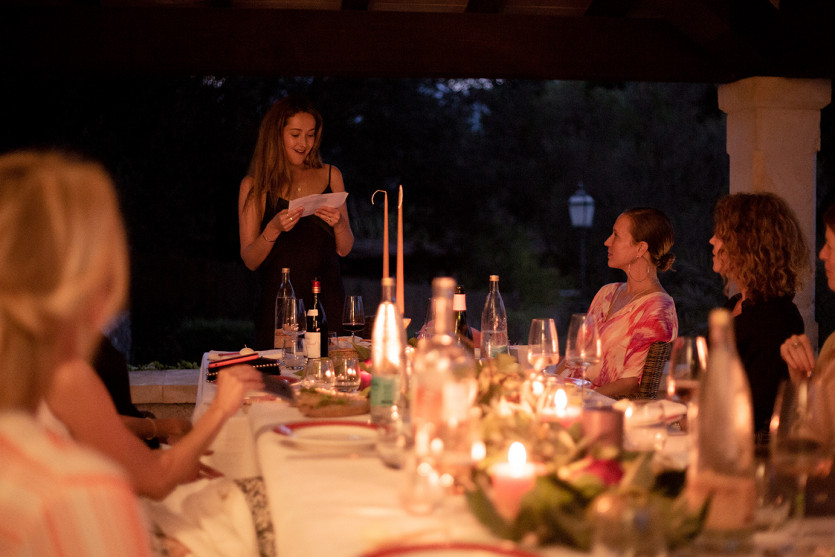 On Friday night, guests arrived and lingered on the terrace of the Yees’ rental house in Pollensa. At a social distance, women in colorful kaftans sipped rosemary-infused cocktails as a brief drizzle broke the humidity. After the rain, a double rainbow arched across the Tramuntana mountains, and the evening was off to an auspicious start.

At a long banquet table Jessica lit the traditional candles, marking the beginning of Shabbat. She then led the group of women through Tshuva—a reflection on what aspects of the past year they would like to leave behind—which were written on slips of paper.

After breaking challah, the ceremony continued as each guest introduced herself by recognizing their matriarchal lineage, and, one by one, spoke about the heirloom they brought to share. An English guest spoke of the heirloom ring she doesn’t have, and of her stoic childhood and her determination to change ancestral patterns. The woman next to her told how her German grandmother escaped to Colombia after WWII. Laughter and a few tears ensued. 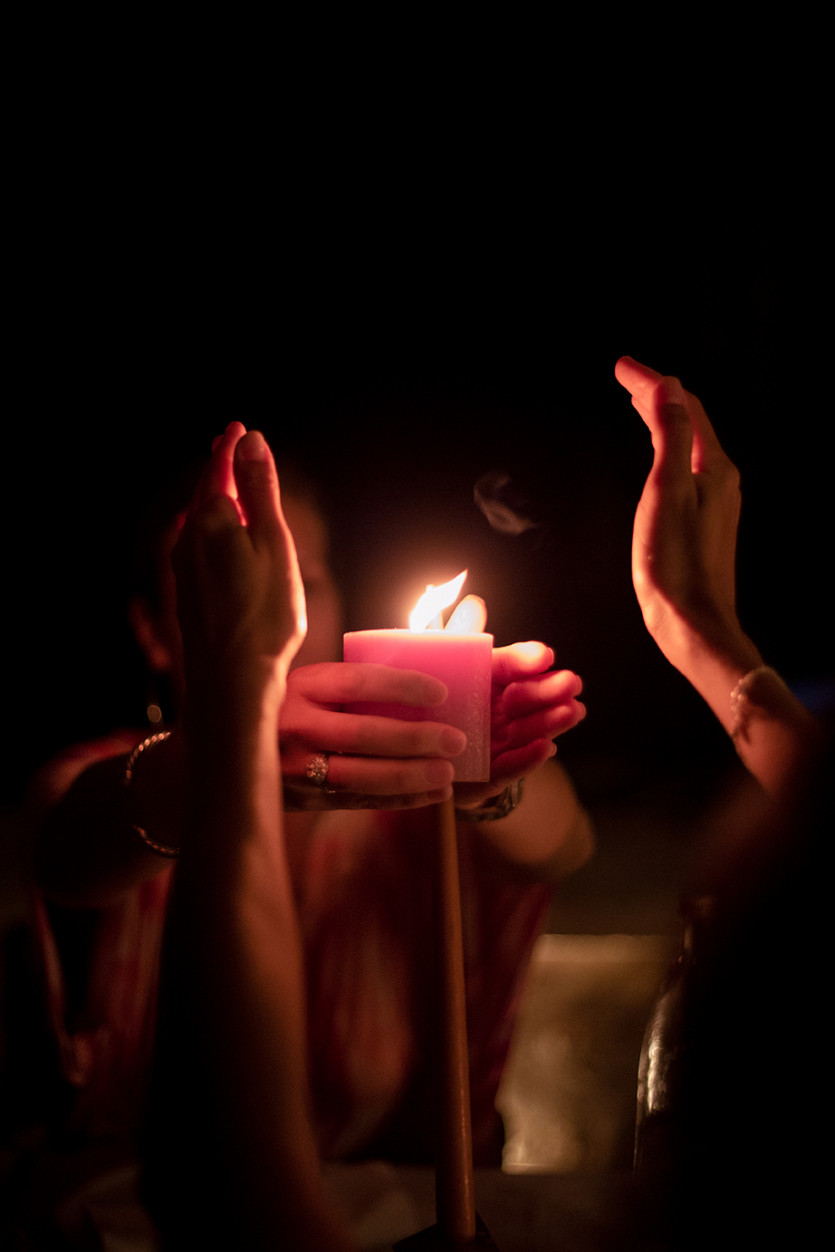 As the stars came out, guests filed down to the pool and set alight floating Tashlikh candles and took a moment to set Tefillah: a manifestation for the year ahead.

After the ceremony, dinner was served. A succulent chicken roasted with figs, accompanied by savory carrots over dill tzatziki and a fennel pomegranate salad. For dessert, an almond plum tart and toothsome cardamom chocolate cookies from EdenEats. The comfort of strangers in these strange times made the holiday’s brevity and ritual poignant.

About celebrating Shabbat in Mallorca, Jessica says, “Coming to Mallorca connected me to a global community of forgotten Jews. Today the Chuetas (the Catalan word for bacon) are finally beginning to re-embrace their Jewish heritage. It feels powerful to be able to host a spiritually Jewish experience here, as if mending some of the turmoil of the past with 12 friends I didn’t even know six months ago—and 90 percent of my guests were not Jewish. That being said, our shared experience during these wild times has created powerful connections, and so, in a new way, I feel a deep sense of community here.” 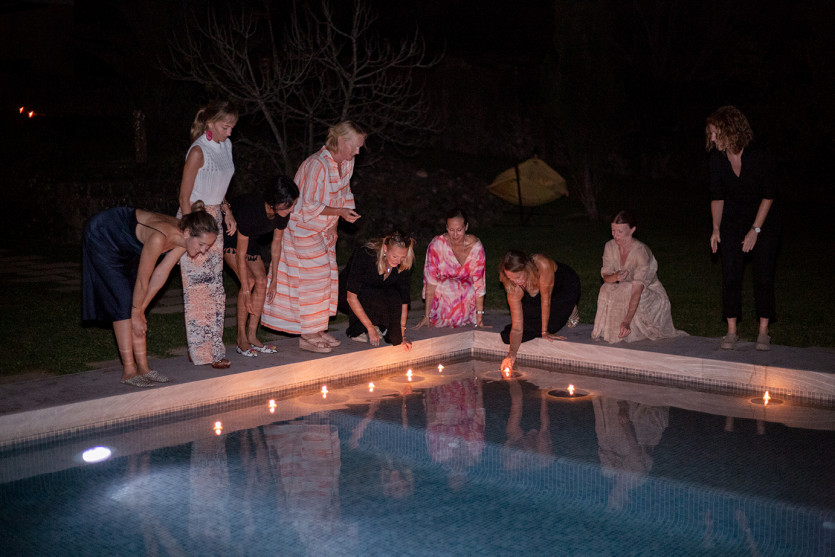 An introduction to the traditional themes of Rosh Hashanah

We use self-reflection, gratitude, and giving to leave the turmoil of the past behind and begin a new chapter. These are the key principles of this ancient holiday, broken down in a way that’s relevant for all:

Tshuva (Self-reflection): What baggage from this past year does not serve me any longer?

Tefillah (Manifestation): It’s time to get specific about your dreams and goals for the coming year.

Tzedakah (Gratitude and Giving): Even in these trying times, let’s remember to have the perspective to think about the needs of others.

Tashlikh: This is the tradition of throwing your “sins” into a body of water so that you may start the New Year without all that dead weight.