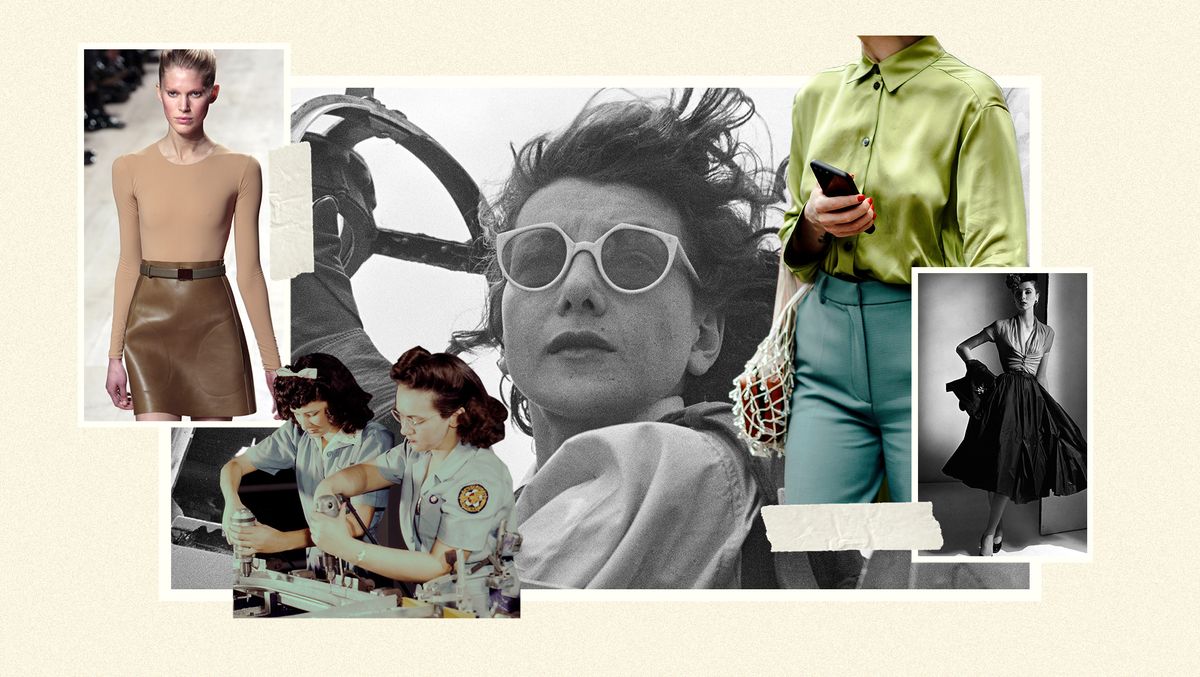 We tapped two historians to discuss how fashion reacts to times of turmoil.

Camille Freestone
We’re all sick of the word, but it’s true—these times really are unprecedented. So to find solace, many people try to find some semblance of precedent to use as a reference for how things will evolve. That’s what the fashion industry has been trying to do as well, looking back on certain events as a comparative tool to forecast what fashion will look like post-pandemic.

Drastic events that affect humanity on a global scale—world wars, depressions—don’t actually instigate changes in fashion themselves, but instead affect the rate of change of trends that were already set in motion. We like to accredit shifts like Christian Dior’s New Look that emerged after WWII to these core-shaking events, but “in almost every case, the change had begun to occur before the world historical event,” says Dr. Valerie Steele, director and chief curator of The Museum at the Fashion Institute of Technology.

“For example, if you look at a dress from 1900 and one from 1920, you go, ‘Holy cow, the First World War changed everything!’ Goodbye, corsets. Skirts get shorter. But in fact, you were getting rid of corsets by 1908 and then bras, and we were experimenting with shorter skirts and things. So what happened in the war hurried that up and spread it through society, more than causing something new,” says Steele.

In a similar context, “the New Look in fact was a pre-war look that had been put on ice,” explains Steele. Christian Dior began designing in the late ’30s, but because of its fabric requirements, it couldn’t produce during the war. The voluminous silhouette was a shift from the slimmer look of the ’30s, but it likely wasn’t caused by the war. It would have happened regardless.

“What actually happens during, say, the Great Depression or a war, is that it kind of slows the changes down, but it also shifts the focus,” explains Laura Mclaws Helms, fashion and cultural historian. War, depressions—they often change your lifestyle. “You’re reorienting your whole life so clothes, especially fashion in terms of trends, becomes less important.”

These events, like the World Wars or the Depression, limit resources and shift lifestyles—therefore, the appearance of fashion may change during the event. “So if you’re thinking about the First World War and the Spanish Flu epidemic, which coincided, you’re thinking about several years where fashion became, for the most part, more serviceable,” says Helms, “useful clothing that were often tailored with a slight military influence.”

People were more focused on their clothing serving a purpose versus the fashion of them. In WWII women were entering the workplace in unprecedented numbers. Therefore, clothing trended toward masculinity for practicality, as women’s fashion is often more ornamental, which would have been impractical at work.

Photo: Getty
The Spanish Flu, the most similar instance to what we approach today, coincided with the First World War in the 1910s and did not produce a tangible change in clothing. Even when people were forced to “quarantine” similarly to how the world has been recently, people still got dressed every morning. Staying in your pajamas all day wasn’t an option.

Regardless of external factors, fashion didn’t work like it does today. “Fashion trends were really for the wealthy who could afford to redo their wardrobes every season. Then it trickled down, but most people were buying a serviceable day suit that they could wear for several years,” says Helms. “During periods like the Great Depression and a war, that became even more important that these things last.”

Instead of changes in fashion itself, “you see certain changes in the reality of the fashion system,” says Steele. With the Depression, financial situations were so strained that people couldn’t afford to buy anything. It caused many dressmakers to go out of business, but the style of dress did not shift. “You have so much more in the way of people wearing old clothes and patching up clothes,” says Steele.

Despite financial strains, the desire for fashion didn’t extinguish. People found creative ways to make fashion out of the resources available. Both the clothing wearers and makers found ways to make do with what they could obtain. “Cork was one of the only materials that wasn’t rationed, so they were making them into high heels for women, and then some were making their wedding dresses out of parachutes,” says Helms.

“I think the importance of fashion is psychological for individuals—it’s a way of making yourself special.”

After these events, fashion proved its resiliency, bouncing back fairly quickly in terms of the desire to shop, to be fashionable. “I think the importance of fashion is psychological for individuals—it’s a way of making yourself special,” says Steele of a phenomenon that isn’t lost during a war.

These events shifted mentalities among smaller groups of people, which actually did lead to changes in their wardrobes. “After WWI, the younger generation basically said to the older generation, ‘You caused this war, you killed so many people. Why should we pay any attention to you and your stupid rules?’ It was much more sexually open, much more body-revealing in clothes,” explains Steele.

After WWII, women were forced back into their homes once the men returned, which caused something more like a regression in fashion. “They were being pushed into being good little wives. You can dress up and wear your sexy New Look clothes, but you’re back in the home. It was much more of a conservative attitude towards women,” says Steele.

In terms of the financial strain that the pandemic has put on the country, the 2008 recession emerges as a precedent, as our lifestyles were more similar at this point. Once again, this did not significantly shift the appearance of fashion.

The recession also happened after the emergence of fast fashion. Yes, there were major money problems, but clothing could now be purchased at extremely low prices, allowing people to look stylish at a lower price point. It may have perpetuated the fast-fashion cycle, but the industry was trending towards that anyway.

Photo: Getty
Once again fashion was still evolving, but not directly in response to the event. “There was already a shift away towards minimalism that I think the recession increased,” explains Helms. “It was a shift towards minimalism, with the wealthy not wanting to show their wealth.” This is when minimalist designers like Phoebe Philo at Celine rose to prominence and direct-to-consumer minimalist Everlane at a more accessible price point. However, this was more of a response to maximalism in the early 2000s than the recession itself.

On a macro level, it changes in response to systematic changes like social media. According to Helms, technology and social media actually had a much greater effect than the recession “in terms of how it splintered fashion to such a degree that people aren’t looking for the catwalks and there is no single trend to the same degree.” The democratization it allowed for had a direct effect on the breakup of definitive styles.

Other changes that are much easier to study actually happen in response to surface-level things like movies. “Like when Bonnie and Clyde came out in ’68 and everyone suddenly started doing 1930s collections. Those are easier to pinpoint rather than larger economic or political events,” says Helms.

“We assume, they’re so devastating, world historical events surely have a major impact on fashion, and yet we find they don’t, really, not in terms of a style change.”

“We assume, they’re so devastating, world historical events surely have a major impact on fashion, and yet we find they don’t, really, not in terms of a style change,” says Steele. “Fashion is so constantly changing that it’s really reacting to everything, in a way. It’s often hard to say whether a change would have happened anyway,” adds Helms.

Everyone is pointing towards the pandemic pushing the “casualification” of fashion, but it was trending that way already. Dress codes had already begun to relax pre-pandemic, and items like high heels had already seen drops in sales as people opt for sneakers.

Obviously, when someone works from home, their wardrobe changes. Once we re-emerge back into the world and our regular lifestyles, it seems that fashion, or better yet, style, will bounce back to a similar nature of what it looked like before all this madness ensued.