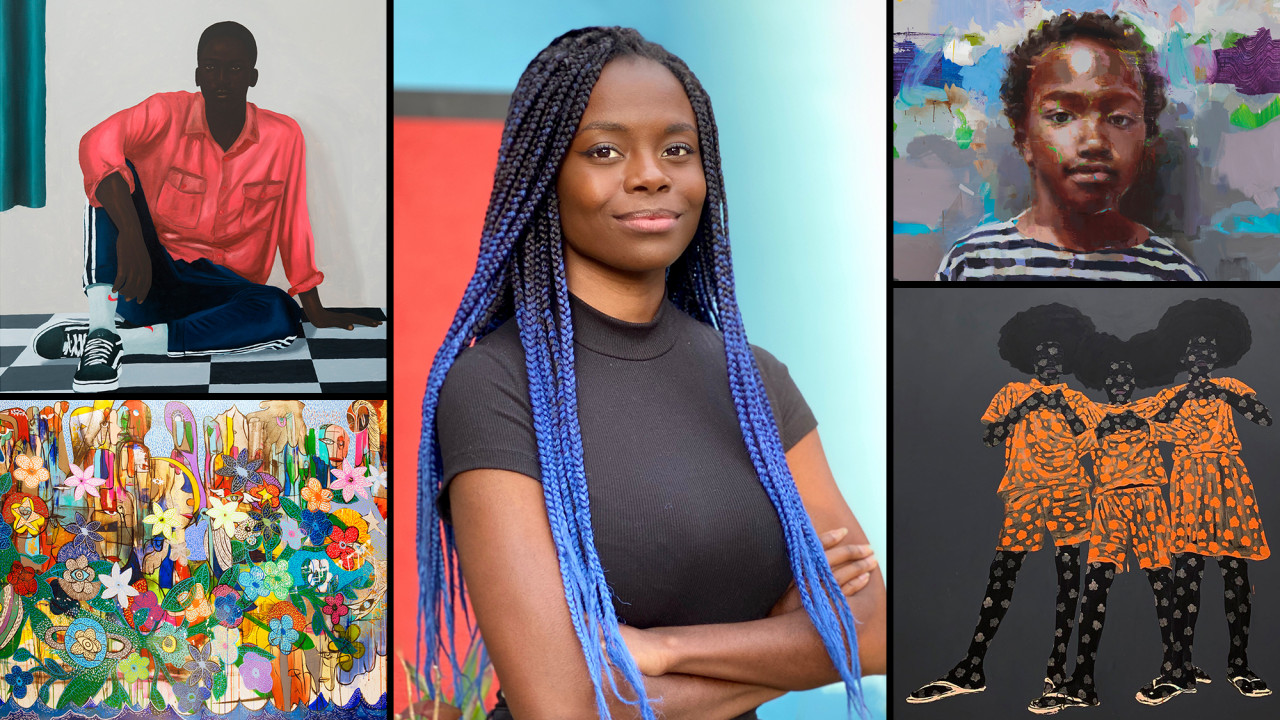 Plus, more details on her new exhibition at Christie’s.

Watch Beyoncé’s new Black Is King video, and you’ll catch a glimpse of a portrait of a young woman, her face partially obscured with braids. In a twist of the norm, art curator Destinee Ross-Sutton became muse to artist Derrick Adams, who was inspired by her mane of thick braids which often dangle in her face. “They wanted to portray this as what they consider beautiful,” says Ross-Sutton. “That was amazing to me.”

A champion of Black artists, Ross-Sutton, who typically operates behind the canvas, has teamed up with Christie’s to develop and curate their current exhibition dubbed Say It Loud (I’m Black and I’m Proud), after the James Brown song. The exhibit features 22 international emerging and mid-career Black artists of which Ross-Sutton co-curated. Unlike traditional auction house exhibits, 100 percent of the proceeds will go directly to the artists themselves. “It sort of fell into my lap, for lack of a better term, but it really turned into something beautiful,” she explains.

The 24-year-old’s job description already encompasses art curator, manager, and advisor, though she’ll boil it down to “really just trying to level the playing field” in an industry so often dominated by white men. A rep from Christie’s described her as “absolutely brilliant and a very quickly ascending star.”

As Ross-Sutton continues to explore the industry and those peripheral to it, she finds new opportunities to incorporate art and the beauty it offers into pop culture. She recently collaborated with stylist Law Roach on his shoot for InStyle that featured all Black talent, stylists, interviewers, etc., to provide art for the scenery. Ross-Sutton is giving high art a modern reference point, taking advantage of this moment of heightened attention to highlight the prolific talent in the Black community. 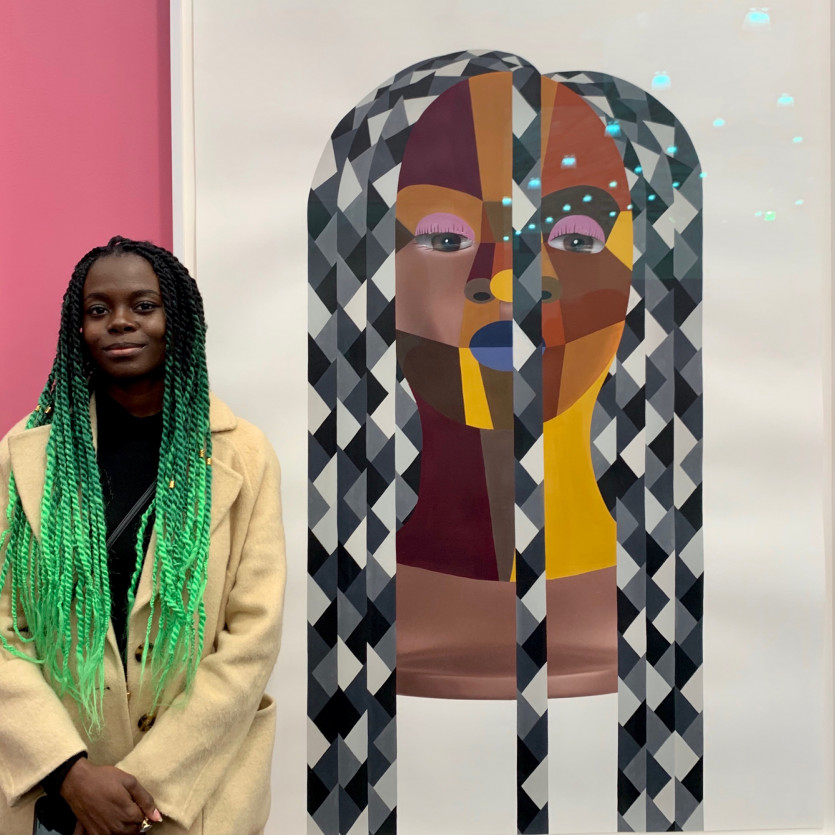 Why did you initially want to get into art?

“It’s always been part of my life, I would say. I grew up going to what some might consider unusual schools, Waldorf and Montessori schools. A lot of the education is based in exploring the child’s surroundings and learning through art. We would create our own textbook, and we would write our own essays and create our own drawings. It’s like we were imprinting the memories, and then learning is therefore a lot easier to take in. It’s always really been there for me.” 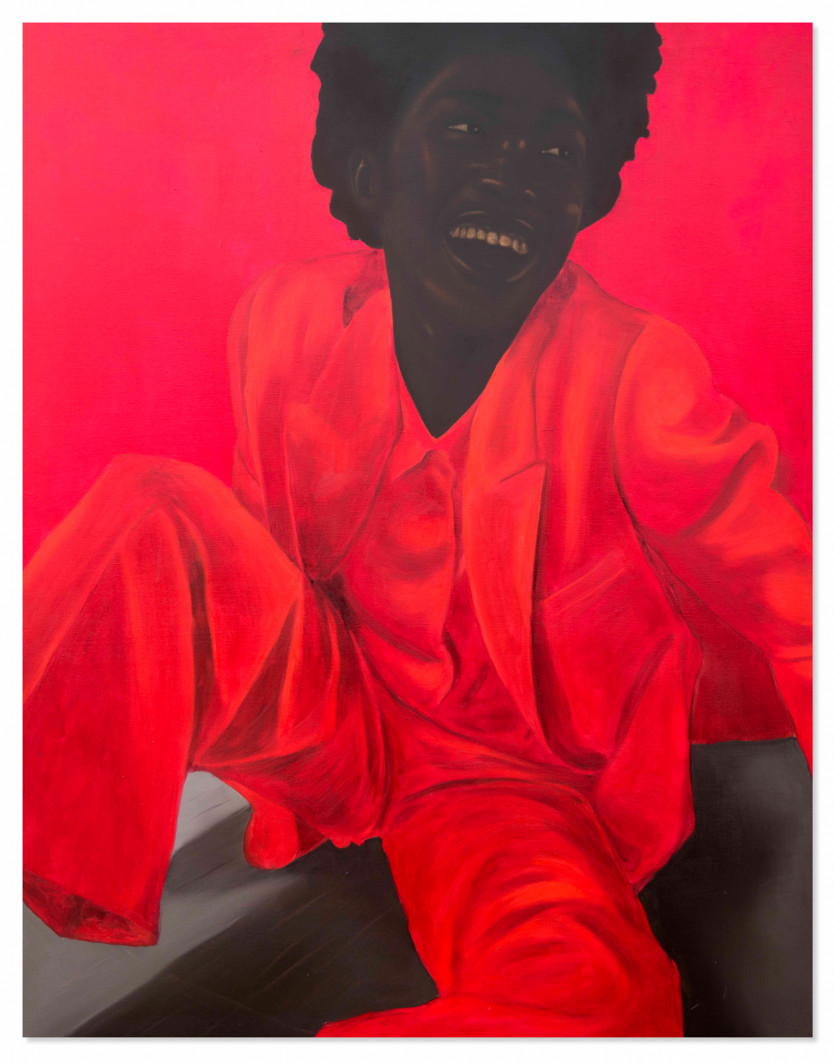 How would you describe your job title, and what does it actually entail?

“It’s a couple things. I am an advisor for clients all over the world. I advise and curate for a foundation that’s opening next summer in Detroit. That’s sort of a combination of the advising and the curation. I’ve also started advising artists, and then through that, managing them, as well. When they get approached by people, I’m helping them that way and also helping them when it comes to pricing, where to place their works, and things like that. It’s really sort of these three things that all combine into one. I’m trying to not only make that communication channel between the viewer and the artist a lot easier, but also finding a way to make it a more just place so it’s not a buyer taking advantage of an artist or situations where someone who’s really passionate might not get it because a gallery gives it to a longtime client. It’s really just trying to level the playing field.”

What are your goals for this exhibition?

“I would say it’s a bit of everything. We’ve been contacted by some amazing collectors and some people who have institutions. It’s not just ‘I want to sell to someone with a lot of money,’ but to sell to someone who wants to take what they have and help others and reach out to others. Ultimately, I want the artist to benefit. In some cases, it could be put with someone who has a large platform so they are promoted a lot, but I also want to have that reach where the everyday person sees it and they’re like, ‘Wow, this is amazing,’ or a child sees it and they’re like, ‘I want to be like this when I grow up’ when they previously didn’t think that it was possible.” 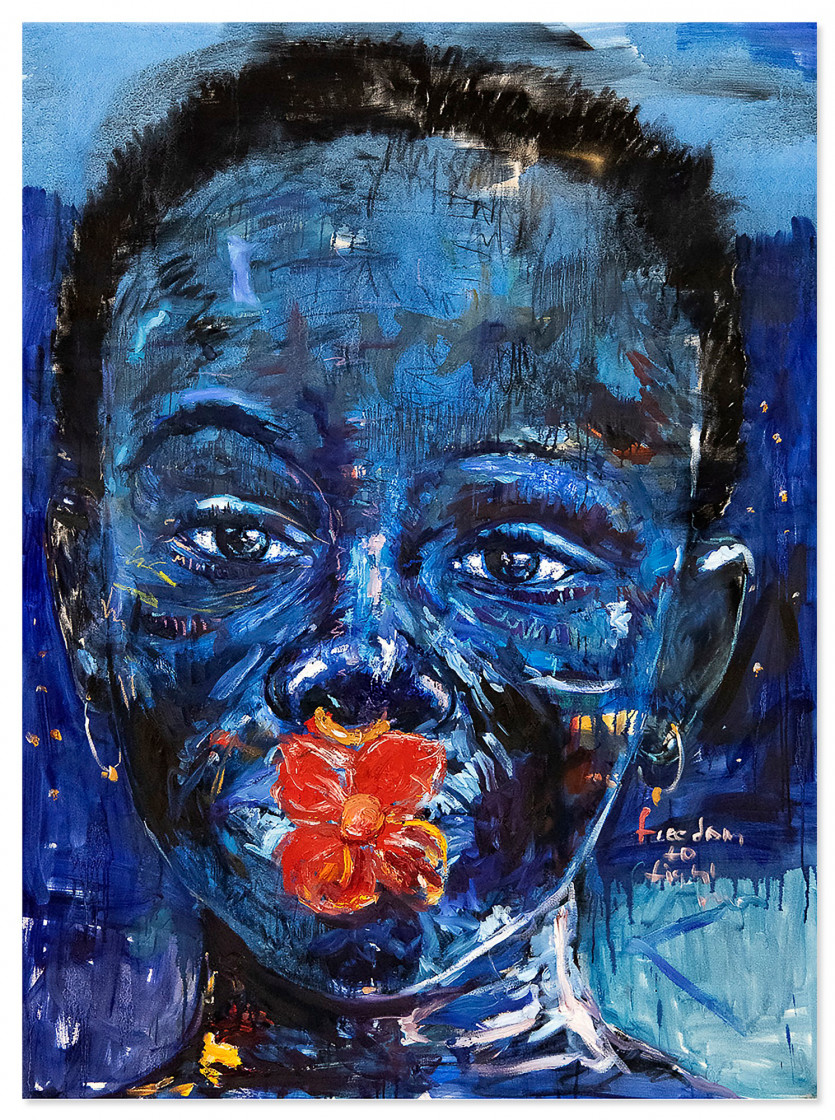 Can you share some examples of how the art conveys the Black experience?

“Nelson Makamo, his main purpose, he says, is to combat the idea of the African continent being destitute and helpless, not being able to do anything for themselves. He combats that not directly with words or slogans or anything, but he constantly paints these young children and different figures that really give you a sense of hope and optimism for the future. Instead of seeing them as something to be pitied, he sees them as a source of inspiration and a place of opportunity and the hope for something great that might come from these individuals.

“Another example I would say is Yoyo Lander. She really portrays vulnerability not only emotionally, but also physically. This stems from her family history with her father, seeing him so strong. Then he went through an accident, and she saw the flip side of him being vulnerable in so many ways, but there was a strength in that vulnerability. Black people have to almost constantly be strong—we’re constantly fighting and struggling. The choice to be vulnerable really is such a brave choice because it’s so easy to see that as a point of weakness and a source of something to be taken advantage of. To choose to be vulnerable in such an environment in order to fully express who you are—all facets of who you are—is really a sign of strength.” 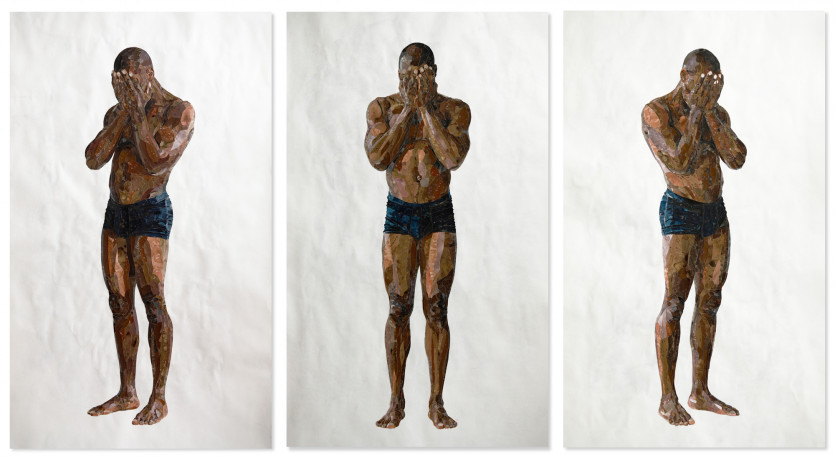 The art world is often thought of as very elitist with a lot of financial barriers to entry. How does this fuel the issue of representation?

“I definitely see that. I’ve experienced that, where people will attempt to invalidate certain people because they’re self-taught or they haven’t had the formal education. It’s as if they fail to realize that there is so much potential in these communities and that really is where the culture comes from that they enjoy. Sometimes these groups will take what they want from these communities and sort of shut them out, benefiting from it. We see it when it comes to how so many Black artists were taken advantage of in the ’90s in the music industry, or even gentrification, where people lose their homes because the rent is suddenly hiked and other people move because they want the culture and the culture is no longer there. The culture got evicted. To me, this, this is sort of my attempt to reach out to both sides and realize that we can all benefit from working together.”

This initiative and so much of what you do is obviously highly personal. Does this help set a fire under you to accomplish so much at such a young age?

“Absolutely. I would say that there’s a lot of pressure. I was talking to my sister last night about this. She said whatever pressure you might come under, you really have to go back to the root of why you are doing this. Basically, I just work to find my own way to make the world, or make my part of the world, better—make it more just, make it kinder, make people more compassionate, to have people see other sides of the world or of other people’s lives that they didn’t see previously. I want to make people more sympathetic to all parts of the human condition.” 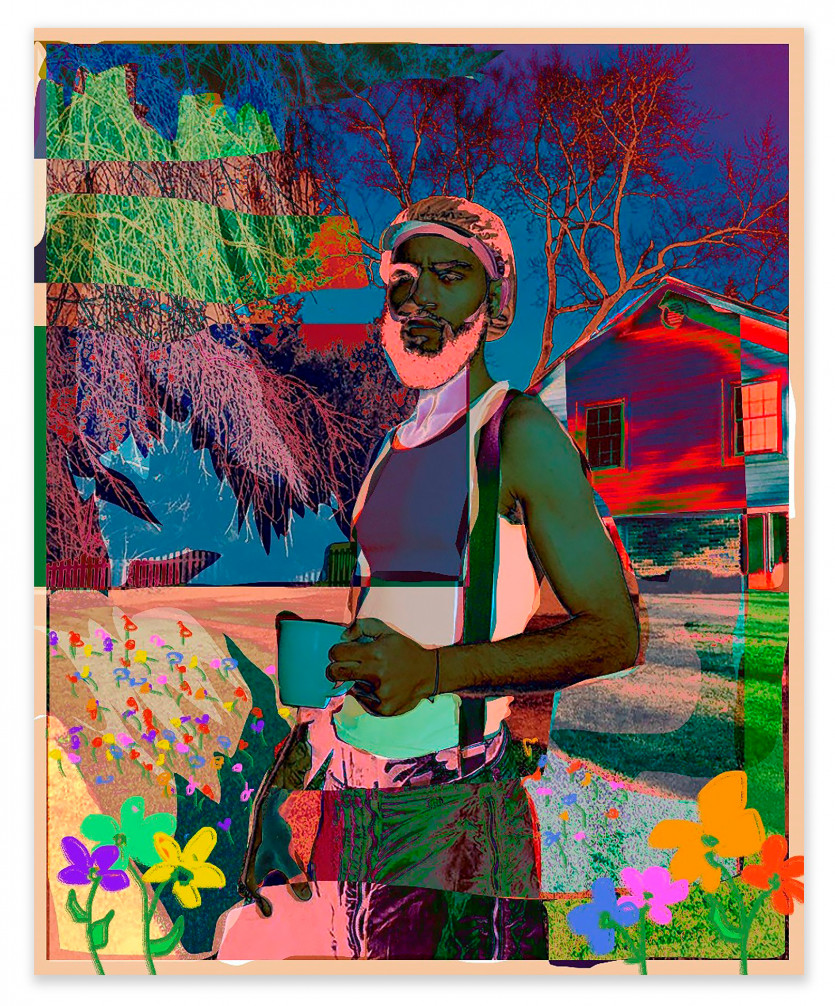 On the power of Black creativity:

“I think our creativity comes from a place of necessity. We had to be creative in order to survive. We had to be creative in order to be free. Whether it was captured women being enslaved, braiding grains of rice into their hair to go over to this new unknown world, or slaves creating peach cobbler from the rotten fruit they were given. We’ve always had to make do with what we have. That has really ingrained this sense of making sure we don’t discount anything as being trash. Everything can be a resource if we use it correctly. It’s in every part of our culture. In the right setting, our creativity has no bounds, and it really can help set a culture.”

Black culture has always had a major influence, you’re just giving it a bigger platform:

“That’s really all I can do. I’m just trying to do what I can in order to help promote these people. Look at what we’re doing. Look at how we’re expressing ourselves. It is so amazing. I guess it was really that point of connection when it came to Law. His realization that he had this amazing platform and he wanted to promote amazing Black creatives. One of the pieces in the shoot by Khari Turner, he actually bought that piece. I told him about the Christie’s show after that, and he got another piece. So it’s not just posting it to make him look cool. He’s really actually investing time, energy, and money. I think that’s amazing, and that’s really what we have to do. We have to realize that it’s not always the best to be the ‘only Black person in the room.’ We can all eat. That’s what I like to say. When I eat, I like to share blessings. If I believe in someone, if I believe in their work and believe in what they believe in and what they do, then I want to give them a platform.”