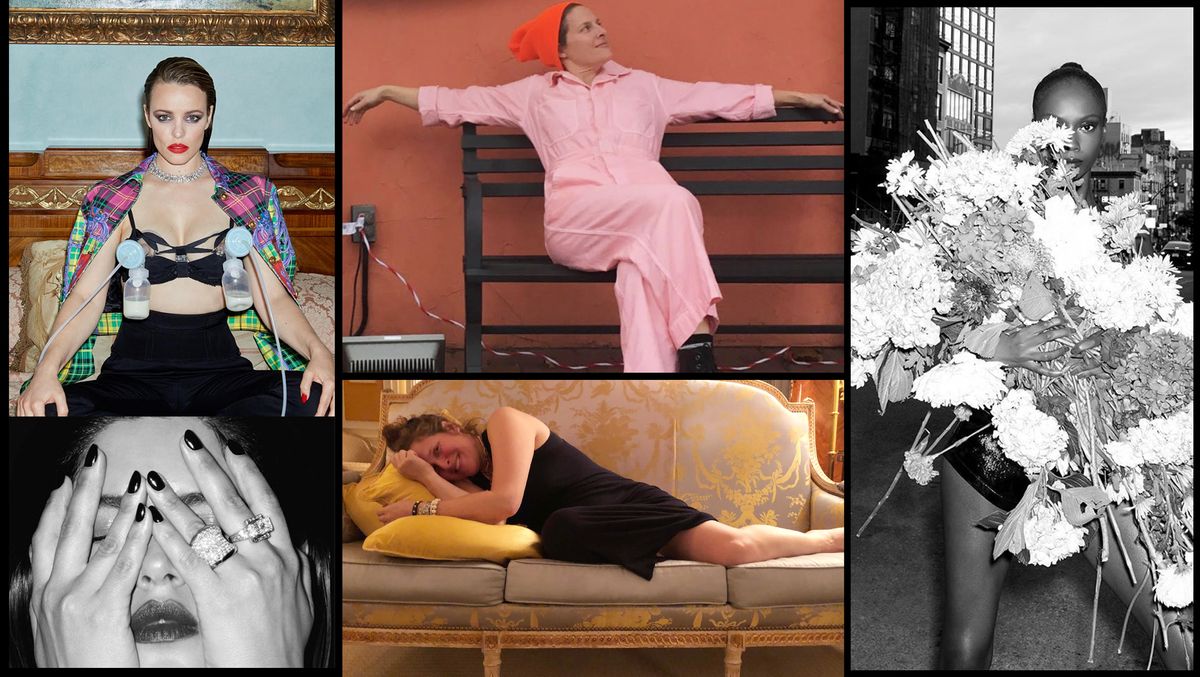 Fashion Director Alicia Lombardini on Being a Stylist During Quarantine

Camille Freestone
Graphic
Rachel Pickus
Fashion is a gig economy. Styling is gig work. It’s contingent on events, launches, photo shoots, and more that involve multiple people circulating in a small space—all things that have been postponed for the foreseeable future. So stylists, among all the other gig workers out there, have had to adapt. That is exactly what stylist Alicia Lomardini has done. Since the current pandemic has forced a significant portion of the world to stay at home as much as possible, Lombardini has not let her skill set go to waste. The stylist, known for her over-the-top shoots of powerful women for Girls. Girls. Girls. magazine, has launched virtual styling sessions. For men.

Lombardini admired the virtual styling work her friend and fellow stylist Allison Bornstein was doing with women so much that she decided to take a similar approach, just for men instead. In these hour-long sessions, her clients come to the table with a few issues they are having with their wardrobes. Perhaps they have specific events post-quarantine they need outfits put together for, or help finding clothes that fit, or they just want to up the ante in terms of style. The sessions are $200 per hour, but all the proceeds go to supporting Lombardini’s neighborhood through the Bowery Mission. “I get it that some people probably think that it’s frivolous to do something at a time like this,” says Lombardini, “but I do think we also need to take care of ourselves, emotionally and mentally.”

Client Paul Bettany
Photo: WENN
This slight shift in work is nothing new for Lombardini, since she, as many stylists do, wears many hats in the industry. Lombardini honed her eye by working with some of the industry’s most elite stylists, Suzanne Koller and Camilla Nickerson, while hopping between sartorial hot spots New York, L.A., and Paris. During a five-year stint at Vs magazine, she was introduced to the world of celebrity styling, which she has continued to do on the side, counting Aziz Ansari, Paul Bettany, and Cynthia Nixon as clients.

On the tail end of that Vs job, she met Claire Rothstein, who went on to found Girls. Girls. Girls. magazine. While working together, Rothstein, a photographer, and Lombardini, a stylist, found in each other what they needed to complete their vision. Lombardini quickly joined the team as fashion director at Girls. Girls. Girls., where they have just released their third annual issue digitally; however, its printing has been delayed due to the current pandemic.

Lombardini is quick to recognize that this period of dormancy is going to force a shift among not just stylists, but fashion as an entire industry. “The idea of glam right now seems somewhat out of touch when people are fighting for their lives,” says Lombardini. She points out that we’ve turned our attention to base needs, which therefore eliminates the need for styling the fantastical shoots she is known for. While America specifically is new to the current situation, it is not the first time something like this has happened. “I do think that throughout history, there have been pandemics and you come out the other end with a shift in perspective.”
Debbie Harry photographed by Claire Rothstein for Evening Standard magazine
She has already noticed that shift in her styling sessions. This pandemic has altered the way her clients relate to their clothes. They are now looking for brands that are environmentally aligned. They are looking to help small businesses versus larger corporations. They are even having her help them shop their own closets instead of adding to them. At the root, the appointments are emotional on some level. “The way we dress has always been tied into our emotional selves and the way we think about ourselves.” Her clients want the clothing to be a representation of themselves.

Lombardini herself is no stranger to shifting perspectives through the lens of fashion. While Girls. Girls. Girls. is still considered a niche magazine, they have produced content that has not only struck a chord on a deeper level, but has taken off digitally. The hyperfeminine, sexy nature of the magazine poses as an ironic facade to attract attention to the modern woman’s complexity. They have shot female powerhouses like Tracee Ellis Ross, Rose McGowan, and Erin Wasson. But when it comes to their most recognizable imagery, it’s hard not to talk about either the photo shoot with Rachel McAdams breast pumping or the recent feminist-commentary video of Cynthia Nixon.

Rachel McAdams photographed by Claire Rothstein for Girls. Girls. Girls.
With McAdams, the image happened organically. She had just had a baby and had to stop the shoot to pump. “She was like, ‘Why don’t you guys just shoot me while I’m pumping?’ I was like, ‘OK, well, let’s make it glam.’” There she was: full hair and makeup, outfitted in diamonds and Versace, pumping. Though Lombardini is a mother now, she was not then. The significance of what they were doing did not fully resonate with her at the time, but it did with mothers around the world who saw the images. People went crazy over it.

The second had much more planning involved. The video shows Cynthia Nixon in suit narrating the poem Be a Lady, They Said, which outlines the contradictory nature of the standards that women are held to today. “We were so thrilled when she did it because it gave the emphasis and the heartfelt message that it needed to be, and it wasn’t making light of anything,” Lombardini says of the pairing. Nixon’s narration was interspersed with a range of clips from the uber-feminine to images that verge on disturbing to drive home their point. “We’re not masterminds of the digital age, we’re just putting material out there that touches us, and in effect it’s touching a lot of other people.”

Fashion is at its most powerful when that fancy, exclusive world mingles with real, even mundane issues. As a medium, fashion has the power to elevate topics seemingly unrelated to the world of glamour into the media. These editorial spreads are a way to instigate conversation about things that need to be talked about.

Photo: Courtesy of Alicia Lombardini
When Lombardini plans the wardrobe for these shoots, she finds a way to tell a story. Both are a lesson in contrast. Nixon talks about the standards of femininity while dressed in a suit: stereotypically a man’s outfit. McAdams uses a breast pump while outfitted in sequins and diamonds: clothes that are universally considered sexy. The clothing choices are engineered to take your mind to a certain place. “The mood, the story, the character I create through the clothes is from my imagination,” and unlike a styling session with a client, “this person doesn’t necessarily exist.”

So how does someone that creates striking fashion shoots for women laced with political gravitas shift to the headspace of helping men pick the best white t-shirt? Lombardini wears a lot of hats in the industry, but if you connect the dots, you will find that on each layer, she is finding a way to push the limits of fashion, to take risks and push the boundaries of comfort zones, whether that be through a new suit for one of her clients or outfitting an actress in sequins and feathers. “Something that brings both worlds together is that we play dress-up and have fun with it.” Fashion, according to Lombardini, should never be taken too seriously.