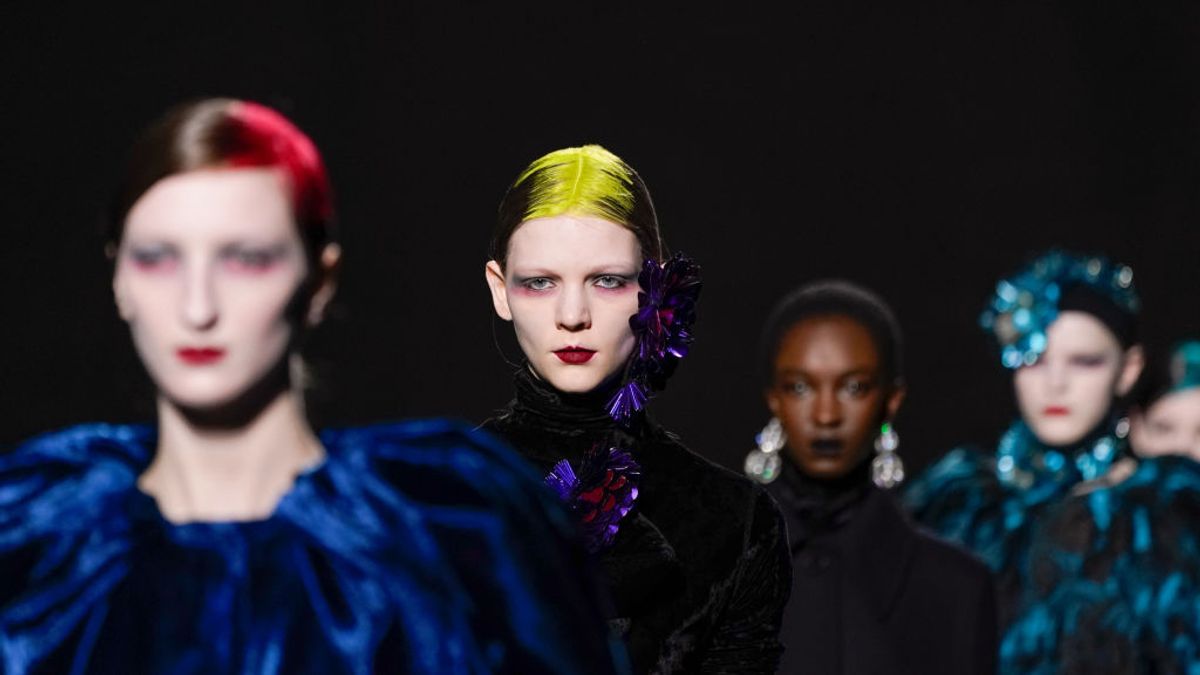 Hannah Baxter
Once again, Paris Fashion Week was the proverbial exclamation point at the end of fashion month, with designers sending some truly jaw-dropping looks down the runways. Hair and makeup artists pulled out all the stops with beauty this season, from crowns of neon feathers to space-age bouffants (plus plenty of drama for the eyebrows). While there was certainly no shortage of beautiful hair and makeup in the City of Light, these four have topped our list as the wildest looks of the season.

Photo: Getty
Call it the Billie Eilish effect. The 18-year-old’s signature slime-green roots seem to have influenced the team at Dries Van Noten, who sent models down the runway with hair plastered in marabou feathers in various shades of purple, fuchsia, scarlet, and lime green. Hair artist Sam McKnight kept the hair otherwise slicked back, which allowed the focus to be totally on the pops of color at the crown of each model’s head. To complement the vaguely Parisian rocker hair, makeup artist Inge Grognard painted ’80s-inspired eyeshadow across the top and bottom lids in two different but complementary shades. Think icy blue and magenta paired with a bright ruby-red lipstick. Paired with the collection’s signature luxe and bejeweled clothing, the overall effect was an eye-catching ode to the more-is-more mentality.

Photo: Getty
Fantastical headpieces ruled the Maison Margiela show this season, with everything from veils to Pharrel-worthy bucket hats making an appearance. It was the eyeshadow happening underneath these toppers that had our hearts sputtering, though. Pat McGrath debuted a modern take on an Art Deco–inspired color-blocked eyeshadow, applying graphic swipes of black, violet, and orange across the upper lids and brows. Paired with the ultra-glossy skin she’s known for, the effect was equal parts whimsical and completely of the moment. We’re imagining how easy it would be to re-create these looks for ourselves with the new Glossier Skywash eyeshadow.

Photo: Getty
Hairstylist Duffy took volume to the next level at Haider Ackermann this season, creating rounded space-age pseudo-beehives paired with short, spiky bangs. The effect was that of an otherworldly sculpture bobbing down the runway, and thanks to makeup artist Lynsey Alexander’s bleached brows, the overall look felt even more striking. Coupled with the collection’s sleek tailored pieces, it was one of the most innovative beauty designs of the week.

Photo: Getty
At Olivier Theyskens, hairstylist Eugene Souleiman painted ultra-shiny streaks of gel in the models’ hair before pulling it back into a low ponytail and securing it with a wide pin. It’s to be determined if this signals the resurgence of the chunky blond highlights that dominated the early 2000s (yikes?), but for the time being we’re very into this look. To complement the hair, makeup artist Isamaya Ffrench created a twist on the classic smoky eye with a smeared version that extended into a wing shape at the corner of the eye.

Yes, You Still Need to Wear Sunscreen in the Winter
The 16 Best Beauty Products That Launched in February
My 5 Favorite Mascaras for Minimalist, But Flirty, Lashes
More From the series Fashion Week