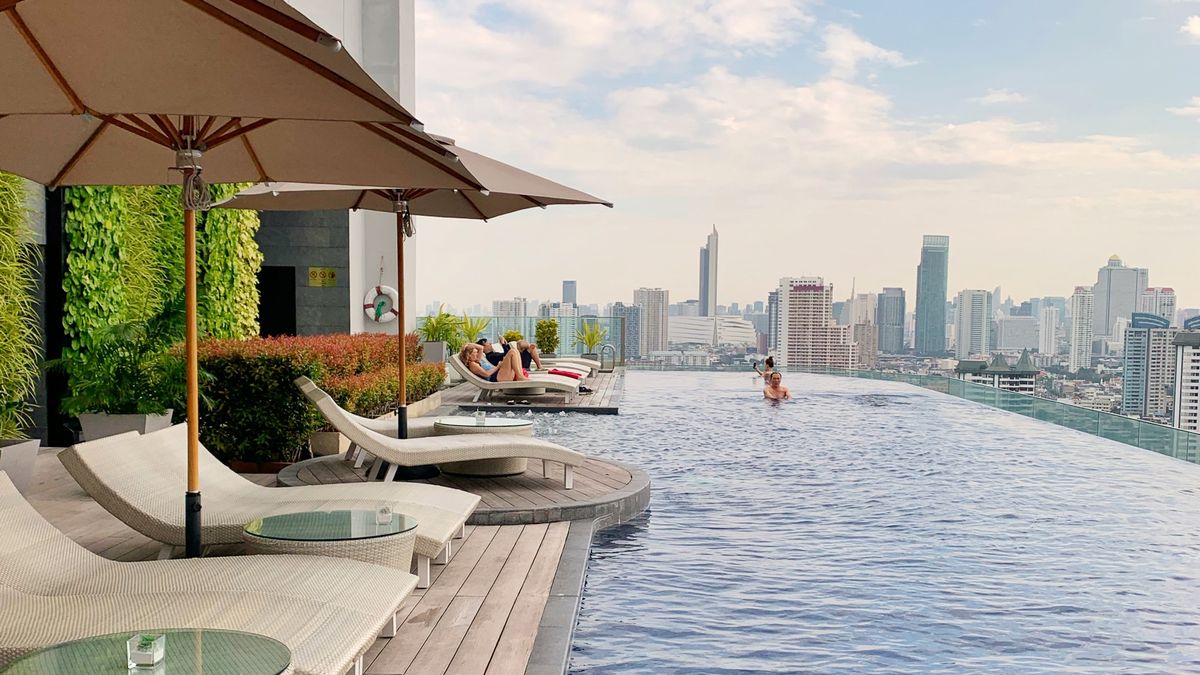 A Luxe Guide to Living It Up in Bangkok

The city deserves to be more than a stopover on your way to the islands.

Laura Itzkowitz
Colorful tuk tuks whizzing by, the wafting scent of curry, Buddhist temples with gilded roofs, and longtail boats floating down the Chao Phraya River—Bangkok is truly a feast for the senses. Though Thailand has had a reputation as an affordable destination popular with backpackers, lately the country—and especially its capital—are ramping up the luxury offerings. From the best new hotels to must-visit attractions, we’ve covered the most glamorous things to do in the Thai capital.

The lobby of the Avani+ Riverside Bangkok is on the 11th floor, so you can imagine how incredible the views are from the rooms above it. There’s nothing quite like waking up to the sight of longtail boats floating down the Chao Phraya River before taking a dip in the rooftop infinity pool. This hotel is like the hip younger sibling of the more traditional Anantara, which is connected by a skybridge. While staying at Avani+, you can book a massage at Anantara and have dinner aboard Manohra Cruises, the hotel’s restored rice barge.

The Park Hyatt Bangkok is an oasis of tranquility designed by acclaimed firm Yabu Pushelberg and AvroKO, who is responsible for the glam Penthouse Bar + Grill. The reigning aesthetic is minimalist zen punctuated by colorful pieces by Thai artists. It’s a serene and luxurious place to retreat after a day in the heat.

Nearby you’ll find one of the city’s newest luxury hotels: the Rosewood Bangkok, which opened this spring. Set in a brand-new high rise, the property has some of the largest rooms and suites in the city, not to mention a luxurious spa and four restaurants and bars, including a mid-century-inspired rooftop bar with a collection of 6,000 vinyl records.

Bangkok’s grand dame—the Mandarin Oriental Bangkok—is about to emerge from a multi-million dollar top-to-bottom renovation. Soak up the hotel’s illustrious history in the Author’s Wing—a haunt for Somerset Maugham, Joseph Conrad, and other writers—and start your evening with a cocktail at the famed Bamboo Bar.

Bangkok is dominated by large (and pleasantly air-conditioned) shopping malls, but Warehouse 30 is not one of them. Rather, it’s the kind of place you’d expect to find in Brooklyn or L.A. It unites a series of uber-cool boutiques, coffee shops, and a space for pop-ups by local designers in a series of reclaimed warehouses along Charoen Krung Road.

Your go-to for exquisite Thai silk should be none other than Jim Thompson, which has several stores in Bangkok. The American secret agent revived the Thai silk industry in the 1950s by sending exquisite garments by local weavers to Vogue before mysteriously disappearing in 1967. His namesake label produces gorgeous clothes, accessories, and home décor.

First-time visitors should be sure to see the Grand Palace, the royal complex built in the 18th century by King Rama I, and marvel at the incredible murals and gold-roofed buildings decorated by porcelain tiles. Within the complex, you’ll find the Temple of the Emerald Buddha. Word to the wise: It can be quite crowded, and the buildings aren’t labeled, so it’s best to go with a guide. Urban Adventures (the day-tour-focused division of Intrepid Travel) offers a tour of the palace and temples that also includes a ride on a traditional longtail boat.

Anyone intrigued by the aforementioned silk magnate should visit the Jim Thompson House Museum, which offers guided tours throughout the day. The traditional wooden Thai house is surrounded by a lovely garden and filled with Thompson’s collection of antiques from Asia and Europe.

These 4 Luxury Hotels May Be the Last Truly Secluded Stays in the World
The Best Boozy Spa Treatments Around the World
Is This the Yelp of Beaches?
Hotels Restaurants
Part of the series: