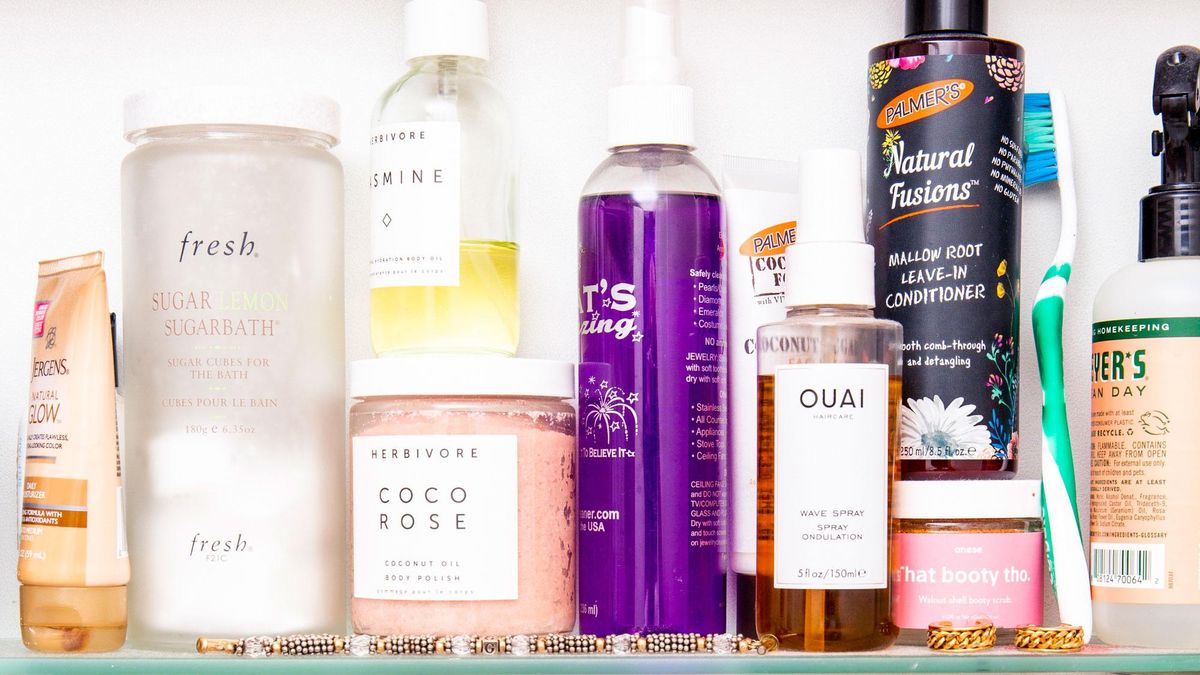 We're referring to the ingredients you won't find on the label.

For consumers, the beauty industry can be murky waters through which to wade. Bold claims and fear-based marketing combined with a deluge of new innovation and the latest trendy ingredients make it difficult to determine fact from fiction. By now, anyone who has kept an ear to the ground has become pretty adept at deciphering the list of ingredients on a label to spot the dirty dozen, but what about what's not on the label?

A recent study testing over 200 unique batches of sunscreen and after-sun care products from 69 different companies revealed that 78 products were contaminated with the chemical benzene, a known carcinogen, thought to be a result of the manufacturing process. This then raises the question, what else is finding its way into our beauty products?


What we're talking about here are trace contaminants, with emphasis on the word trace because the levels of these contaminants are generally just that, trace amounts. But that doesn't necessarily mean they're insignificant. In fact, in the case of the benzene/sunscreen study, some batches contained up to three times the conditionally restricted FDA concentration limit of two parts per million (ppm). Add to this the findings from a study demonstrating that skin pretreated with sunscreen specifically increased the penetration of benzene.

"There are a variety of contaminants that are commonly found in beauty products, and some are more concerning than others," says Lindsay Dahl, SVP of Mission at Beautycounter. According to Dahl, contaminants end up in finished goods through a variety of means and at varying levels. The most common offenders that primarily contaminate raw materials or manufacturing equipment include:

Heavy metals: Elements found naturally in the earth (think mercury, lead, cadmium, arsenic) that are contaminants of natural colorants used to create makeup. Case in point: Not everything that is "natural" is safe. Because of the variable distribution of heavy metals in the ground, it can be difficult to know where they will end up and in what concentrations. Depending on how we are exposed to them, how often, and in what amounts, heavy metals can be toxic.

Phthalates: A family of chemicals that increase the flexibility and durability of plastics and "can enter into a product through the plastic storage containers used at the very beginning of the supply chain, where most brands don't have control over the materials touching the raw material," says Dahl. Phthalates have long been suspected endocrine disruptors and are considered to be harmful to reproductive health.

1,4-dioxane: A chemical generated through a process called ethoxylation, in which ethylene oxide (another known carcinogen) is added to other chemicals to make them less harsh. An example of this would be converting sodium lauryl sulfate into its milder counterpart, sodium laureth sulfate. 1,4-dioxane has been classified a "likely carcinogen" with short-term exposure leading to potential irritation of the eyes, nose, and throat, while long-term exposure may lead to kidney and liver damage. A 2018 study revealed that 23 out of 30 body washes, detergents, baby products, and shampoos tested positive for 1,4-dioxane, some of which contained up to 17 ppm, exceeding the 10 ppm amount that is considered safe for consumers. It is advised that manufacturers employ a technique known as "vacuum stripping" to reduce 1,4-dioxane, but it cannot be removed completely and there are no requirements to do so.

Other contaminants are by-products of the extraction methods or treatments for ingredients, such as a class of chemical compounds called per- and polyfluoroalkyl substances (PFAS), often referred to as "forever chemicals" for their persistence. PFAS are often found in "wear-resistant" cosmetics such as waterproof mascara and long-wear foundations, but they are seldom listed as an ingredient on the label. A recent study screened 231 cosmetic products and only 8 percent had any PFAS listed as ingredients.

While this might all be sounding a bit scary, it's important to note the distinction between intentionally added ingredients and contaminants. "A contaminant will not be listed on the ingredient label because it was never intended to be part of the product," says Dr. Caroline Robinson, MD, FAAD, and dermatologist and founder of Tone Dermatology.

It's not that companies are actively formulating products with these contaminants; instead, trace levels can be inadvertently introduced, and while brands may be working hard to minimize contaminants, they unfortunately cannot entirely eliminate the potential that a product may contain trace amounts.

What Are Brands Doing to Address It?

According to Dahl, there are no required testing or quality control programs in the beauty industry, which has allowed most beauty brands to not take on the extra steps. "Brands should implement routine testing programs for high-risk contaminants and use that testing to inform better raw material sourcing," suggests Dahl. "It's also important to help educate consumers on how and where contaminants enter products and what the brand is doing to address it," she adds.

Beautycounter tests every batch of their makeup products for a suite of heavy metals prior to going to the market. "While we will never claim to be heavy-metal-free (that's an impossible claim to uphold), we take pride in implementing an industry-leading testing and sourcing program," says Dahl.

Brands like Saie work with Good Manufacturing Practice (GMP), a system for ensuring that products are consistently produced and controlled according to quality standards. "Saie has several third parties who test each product (raw materials, formula, and packaging) at multiple stages throughout the development process," says Laney Crowell, founder and CEO of Saie. Crowell goes on to point out that all finished products are tested for safety, including what is called a Repeat Insult Patch Test (RIPT) to test a formulation's irritation and allergy potential, and that ingredients are tested for expected contaminants such as heavy metals, bacteria, mold, etc.

"At Beautycounter, we screen ingredients that have known contaminants, we look for harmful extraction methods that allow contamination to happen, and we spot-test our products," notes Dahl. "If there are issues, we use that information to help find cleaner suppliers and safer products," she adds. Beautycounter is also leveraging their business voice to help pass updated safety laws on the beauty industry.

What Can Consumers Do?

"While brands cannot entirely eliminate contaminants, it's important for consumers to understand that brands should be taking meaningful steps to help reduce exposures where possible," says Dahl. She goes on to stress that consumer interest in ingredients is at an all-time high, and we must first make sure that brands are not intentionally adding these ingredients, but they must also make earnest attempts to reduce exposure to contaminants.

Dr. Robinson is seeing more and more patients engaged with an increased interest in ingredients and product safety. Her one caution is that brands have an ethical obligation to produce safe products, and much of what exists on the internet regarding individual ingredient safety is based in fear. "Unfortunately, the discussion of safe versus unsafe and fear-based skin-care marketing disproportionately affects the most vulnerable and marginalized populations and can be damaging for their skin health," says Dr. Robinson. "Specifically, there is much debate in communities of color about whether to wear sunscreen, and the recent conversation surrounding contaminants in sunscreen and the fear it produced no doubt impacted this conversation," she adds.

Knowing that there can be an overflow of marketing and mixed messages around beauty-product testing, Crowell believes it is important that customers stay as up-to-date and informed as possible. "Education is key, and consumers should hold brands accountable as a reliable and trusted source when it comes to transparency around ingredients," says Crowell, adding that by the same token, brands should be holding their ingredient suppliers and manufacturers accountable as well.

Dahl urges consumers to ask their favorite beauty brands if they test for contaminants. "Simply asking the question will help move the industry in the right direction," she adds. According to Dahl, ultimately, what we need is for Congress to pass federal legislation that updates the regulatory system for the beauty industry, and Beautycounter has been an active business on Capitol Hill asking Congress to better regulate the industry. "There are certain things we have control over, and there are other issues like contaminants that will require the whole industry to clean up," says Dahl.

"The responsible approach regarding skin care is to acquire skin care from a reputable distributor and stay up to date on any recalls, just as you would with the food you eat," suggests Dr. Robinson. In the wake of the sunscreen findings, Dr. Robinson's advice to her patients was to take a look at their own sunscreens and discontinue use if their sunscreen batch was listed as affected. "Understanding that this can happen and is not a reason to discontinue sunscreen use entirely has been something I emphasized judiciously," she adds.

The bottom line: "The reality is we are exposed to so much in so many other ways daily, with air pollution, bacteria, dust, et cetera, that much of our skin care is unlikely of any concern," notes Dr. Robinson, who goes on to add that "a world without any exposure does not exist." But what we can do is educate ourselves, shop smarter, call for greater transparency, and demand more from brands.