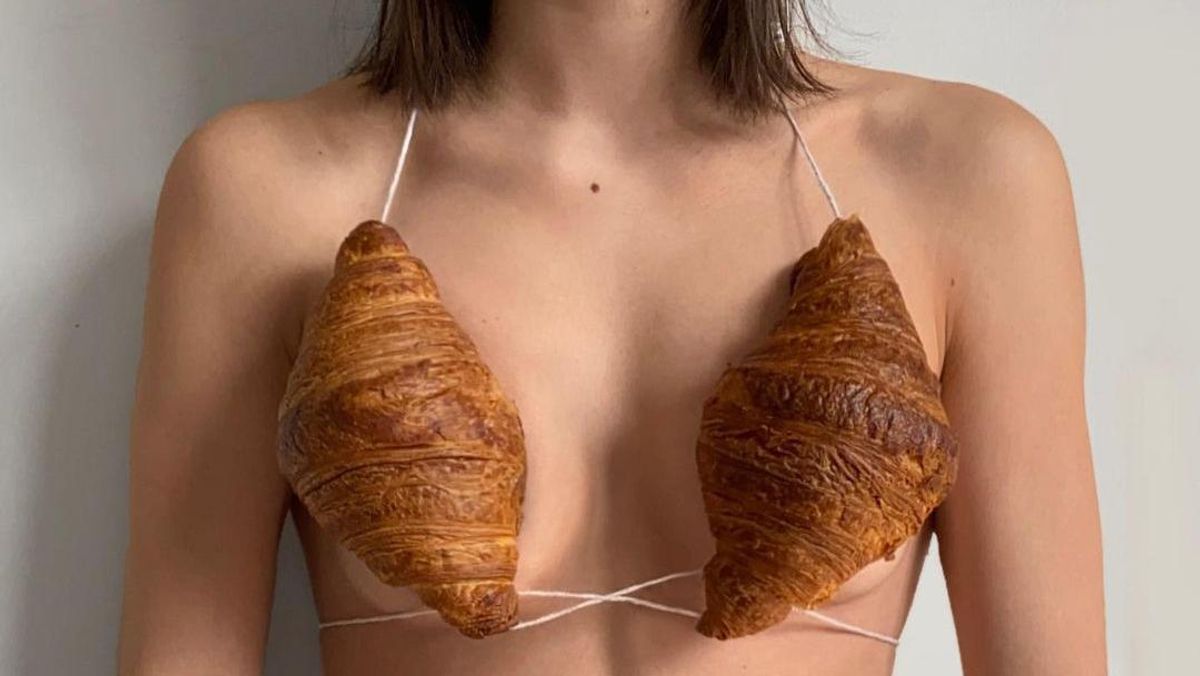 The demise of shirts as we know them.

Locked in our homes amidst the darker days of quarantine, when we turned to social media as a form of personal connection and Instagram became something akin to the Wild West, a photo surfaced of a woman donning a bra top made of croissants—a "brassant," if you will. Starved for interest, the post went viral after it was shared by the Jacquemus account, spawning numerous articles about designer Nicole McLuaghlin's unique design sensibilities.

Rooted in upcycling, she brings new meaning to the idea of a shirt, swapping sandwiches for bras, popcorn bags for vests. In doing so, she deconstructed the notion of a top in the fashion sense, revealing that basically anything goes. "I've made tops out of fans, bags, lemon squeezers, and croissants. It can literally be anything," McLaughlin tells Coveteur. "It depends on what you want, but my ideal top is multi-functional." Her bolder-is-better mentality did not evolve from a vacuum this year, either.

Street-style photographer Johnny Cirillo of @watchingnewyork also noticed a shift in dress—the physical manifestation of what he believed to be an evolving sartorial mindset—specifically through the example of sheer clothing. The trend has been here for years but previously was only worn with undergarments beneath. Between the summer of 2019 and that of 2020, people found the confidence to bare all beneath the mesh.

"There's always sheer. People like see-through. I would see a girl with a sheer top with a bra underneath—which is still risky for some. All summer [of 2019] long, I probably had a folder of 50 sheer tops, guys and girls, covered with bras underneath," he recounts. "July 2020, I made a whole folder with no bras underneath. They had this anonymity because they had their mask on. It gave them a little bit more—I don't know if it gave them more confidence."

Outside the streets of NYC, pedestrians may not be as brazen, but other riffs on the traditional idea of shirting have emerged. The scarf top is an idea that is still going strong after multiple seasons of enjoying mega trend status. Fashion resale platform Depop saw a 76 percent spike in sales of scarf tops between June and July. We've also witnessed the vest trend evolve into its own shirting options as summer eliminates the need for under layers. Corsets and swimwear tops are other options to be worn in lieu of blouses, button-downs, and t-shirts.

As the pandemic was the final push in shattering outdated fashion rules, anything is possible. Practically any item that was previously worn more so as a shirt accoutrement can now be seen as a top in and of itself. Maybe it's the anonymity the masks provided us with or the fallout of a newfound fascination with upcycling. Perhaps we are collectively feeling bolder—chalk it up to hot vax summer? Though Mclaughlin's level of upcycling might be a lot for most, this idea of repurposing seemingly unlike objects to wear in lieu of traditional garments is ripe with sartorial potential. If you're not quite ready for a "brassant," we've rounded up a few less intimidating options for you to try below.

A post shared by Imani Randolph, not Rudolph 🙃 (@champagnemani)

Not a new trend by any means, the scarf is still going strong for summer 2021. It's the perfect complement to jeans, miniskirts, etc.

We all wear one (most of the time), so why not show it off? Plus, what a great excuse to invest in one you really like!

Breathe a second life into your swimwear by mixing it in with your ready-to-wear staples. Let a one-piece serve as a bodysuit and a bikini as a crop top.

The One Shoulder One Piece

Channel your best Bridgerton look with these ultra-feminine separates. We suggest a boxier pair of pants to level out the proportions.

A staple that has risen to supersede trend status, vests can be worn on their own as a top throughout the warmer months. Perhaps you even wear one open over a bra or swim top?

Another chance to show off your undergarments (or bare all), these see-through shirts are cool, both physically and mentally.

3 New Ways to Wear a Mini Skirt
The Long-Awaited Return of Going-Out Style
The Summer's Biggest Trends, According to New Yorkers