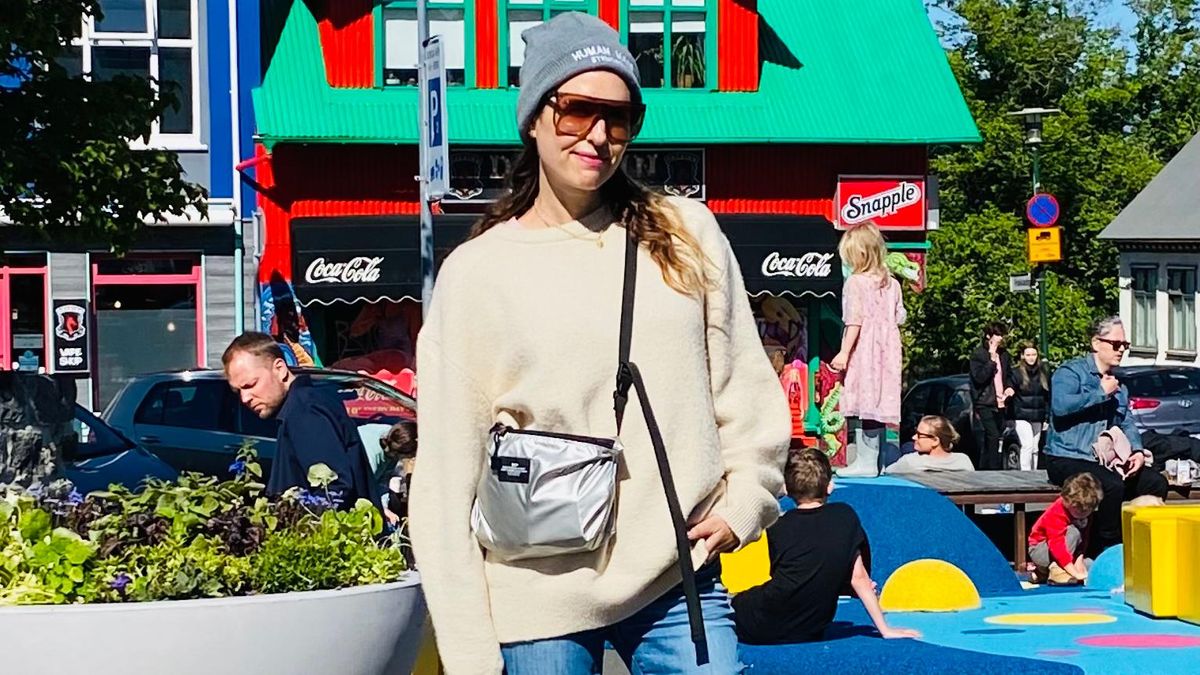 Now's the time to discover this magical country that's not too far from home.

Have you heard? Iceland is a tourist destination! Along with legendary waterfalls and charming chapels, it's known for its own unique brand of Scandi culture and around-the-clock summer sunlight. But the super-friendly locals (many with a wicked sense of humor and a proud sense of heritage) really set the stage for the fun that's to be had. And due to its close proximity to the States and England, there are tons of English-speaking expats, lessening the language barrier and making it an easy country to navigate on your own. Its unique balance of popping city, beautiful wilderness, and culinary adventure makes it the ultimate family trip that, while not very far-flung, will feel otherworldly.

As of late June, Iceland was open for business, as they hadn't had a new case in two weeks (and they had the parties to prove it). And even with the circulating Delta variant, their cases remain low (at the time of this article, there were 55 new outbreaks). Expect to test before entering the country and upon return (in the most efficient, sleekest med center, that is). Plus, everything you do will be outdoors, adding to the safety level of this experience.

How you choose to explore Iceland comes down to personal preference. The popular "Golden Circle" route will take you around the perimeter of the country, but prepare to hotel hop, making each destination short and quick. But if you want to really soak in a few regions, we suggest picking the South—known for its black sand beaches, lush mossy fields, and hikeable glaciers—and the West, cherished for its fjords, volcanoes, and craters. But wherever you go, expect to travel alongside plenty of enchanting Icelandic horses, plump, cartoon-like sheep, and periwinkle lupine, a stunning flower that's sprinkled just about everywhere.

You'll land in the capital, pick up your rental car (all are equipped for harsh weather conditions, but make sure to get one with GPS navigation), and begin your journey. Reykjavik is a real vibe; it feels like a mountain town mixed with a Scandinavian fishing village with a splash of Brooklyn. Settled by the Vikings in 870 AD, the once gable-fronted houses shifted to farm and Swiss chalet styles that still populate the city. But after a devastating fire in 1915, an Icelandic architect who had returned from Denmark had a vision for a more modern look, evident in the towering Hallgrimskirkja Church that sits in the middle of town. As a city of just 120,000 people, many are young (and visiting), keeping the energy high and the nightlife bumping (if you're staying downtown, bring some ear plugs for bedtime—or simply join the party!).

Most of the hotels have an oddly corporate vibe, but the 101 is a former art deco 1930s office building turned modern boutique spot that serves as a great home base before venturing into the countryside. Part of the Design Hotel Group, expect super-sleek rooms with extra-comfy beds in case jet lag kicks in. Plus, the Icelandic Opera House is just next door, for an off-the-plane splash of culture.

Food is one of the city's huge draws as options span from the Michelin-star Dill to dives that are surprisingly delicious. Fish Market takes advantage of island geography by serving up some of the freshest sushi ever, while Sumac Grill is a cool spot with Israeli-inspired kebabs and dips. Planted in a charming floral shop, CooCoo's Nest is the ultimate healthy lunch spot with coconut-sweet-potato soup and fluffy frittatas from a Northern Cal chef. Braud & Co is a bakery set up by a French expat that's known to have a line out the door at sunrise (the cinnamon rolls are the first to go). But if you want to really learn about Icelandic cuisine (traditional dishes include fermented shark and smoked sheep's head), take a cooking class with Salt, where you will make yourself an all-star meal (think morning-caught arctic char and traditional crepe-like Icelandic pancakes). Side note: Street food fiends will want to test-drive the famous hot dog stand called Baejarins Beztu Pylsur that's so good, vegans have been known to take a bite.

If you want to level up your pandemic-era streetwear, Hurra is a real find that's stocked with the coolest athleisure that isn't all over the States (we like 7 Days Active for its punchy palette). And while you can certainly grab a Fjallraven backpack online, Reykjavik is home to the mother ship where you'll find painted options and amazing oversized travel totes. Fako is a beautiful home store with herb and spice jars, candlesticks, and neutral throws. And if you're toting the kids, Vinberio will be your bribe spot for every type of candy under the (24-hour) sun. Make sure to pick up the country's Omnom chocolate bars that are so pretty, they're gift-worthy.

The city has lots of under-an-hour museums to explore between meals, but our favorite is the immersive Fly Over Iceland, which simulates air travel over the entire country (fun for all ages if you don't get carsick).

In Iceland, renting a car and doing a self-drive is both oddly relaxing and super scenic. So two hours in the Icelandic countryside, studded with wild horses and the wooliest sheep, is hardly like two hours in traffic on the turnpike. And then once you reach the South, you're officially in a magical place.

Charming hotels are simply hard to find, but Skalakot Manor, a beautiful black modern farmhouse, checks all the boxes (wallpaper, vintage light fixtures, needlepoint!). The cozy in-house restaurant is where you live now, as there aren't any real food options for miles. Luckily its fresh, local fare and extensive wine list is right on point—with a great kid's menu for picky eaters.

This is why you came. Put on your warmest beanie and get ready to try everything from glacier hiking to zip-lining with a surprise bungee-like finale (without the near-death part). Visit Vik, a charming fishing village with a burger joint that draws people from all over, and make sure to check out Seljalandsfoss Waterfall, which you can walk behind (bring waterproof jackets!). A quick ferry ride will bring you to the Westmann Islands where you can take a wild ride water safari to see puffins clinging to cliffs, elephant rock formations, and ancient caves (whales and seals are for the lucky). Having been devastated by a volcano eruption, the main island has its own history and a small museum to explain it, or forgo the museum, rent bikes in the town center, and see it for yourself. And since Skalakot Manor has its own horse stables, be sure to take a morning ride to the nearest waterfalls and take a photo that will make you look like you're living a fairy tale.

Driving from the South to the West is the largest stretch of road—about four hours —but breaking up the drive with lunch and waterfall viewing makes it feel easy.

French Vogue recommended Hotel Budir, a chic farmhouse hideaway complete with roaming sheep and a surrounding marsh. The fine-dining restaurant on the main floor draws people from all over the region for its world-class wine and upscale food (hotel hits are the fancy "loaded" fries and, of course, the fresh-caught fish). Make sure to spend some time in the "Glass Room," where you can take in the magical landscape while playing Bananagrams, watercoloring, or having a glass of Cab. This truly is an editorial layout at its best, so be sure to snap some scenic pics with your crew before leaving.

This part of the country calls for outdoor exploration to the max. In Snaellfell Penninsula, visit the black pearl and golden sand beaches, hike up the volcano crater, and if you can handle it, go caving with Summit Group, where you will hang underground for a full hour with nothing but a flashlight, a guide, and some animal bones (kids will love this). Small geothermal pools are in this region (one is even called "The Secret Lagoon"), along with greenhouses that grow fruits and vegetables. In the afternoon, you can wander through meadows on horseback to the beach, which is about as dreamy as it gets.

On your way back to Reykjavik, stop by the famous Blue Lagoon 45 minutes outside the city. But you heard it here: What's billed as a huge tourist destination actually feels like a high-end private spa. It's elegant and clean with beautiful showers and lockers—and since you need tickets, it's never too crowded. A word of advice: The minerals in the geothermal bath stick to your hair, making it crunchy for weeks. Make sure to condition well before and after the soak or throw it in a bun. And be sure to take advantage of all the pore-sucking face masks that are offered at "the bar."

Tidbits to know before you go!


While Icelandic Air is a popular airline, it's been known to cancel flights, making it slightly unreliable, so choose an American carrier if possible. In the summer, it's light for almost around the clock, so even though hotels are kitted out with black-out shades, bring your melatonin! Also….it's cold. Pack your puffers because you will need them (it's a nice break from oppressive summer heat), but if you carry on, you can always hit the city's stores for extra layers.