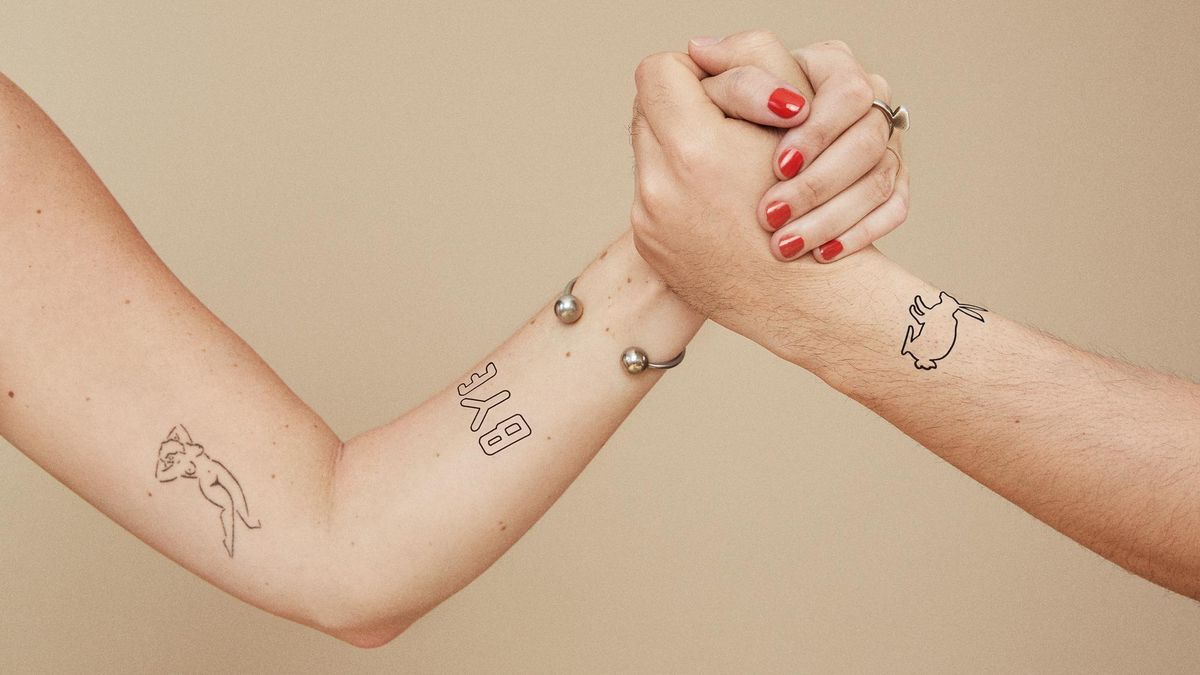 No commitment, no problem.

For some, the commitment of a fresh tattoo is a thrill, and committing to each new image is part of the experience. But for others (hi), the idea of committing to a tattoo forever is nerve-racking at best and insurmountable at worst—which means there are plenty of folks out there who love how tattoos look but don't have any themselves.

Even for the most commitment-phobic of us all, there's now an answer to that: Ephemeral Tattoo, the very first tattoo studio that offers tattoos created with ink that fades over the course of a year or so. At first, your new dolphin on your ankle (JK, JK—unless you're into that kind of thing!) looks exactly like a "real" tattoo, but as the months pass, the ink slowly fades until it disappears. The studio opened in Williamsburg, Brooklyn, in March.

"To understand how Ephemeral ink works, it's helpful to explain what makes permanent tattoos permanent," says Josh Sakhai, a co-founder of the studio. "A traditional tattoo uses ink that goes into the…layer just below the outer skin." Your body can't break down traditional tattoo ink, which "clumps together—too large to be removed, your body 'walls off' the area, and the ink stays," Sakhai says.

"Ephemeral tattoo ink particles, in contrast, break down over time and become small enough to be removed by the body." But that's the only difference—trained tattoo artists apply Ephemeral tattoos with "real" tattoo machinery, and the ink is applied by breaking open the skin. (So, yes, they still hurt.) The time it takes for the ink to fully fade "varies from person to person," Sakhai says, but it's billed as about a year.

Where did this magical ink come from?

The co-founders of Ephemeral met at NYU, and as with many good ideas, the ink was conceived from an idea and brought to life over the course of six years. Two co-founders, Dr. Vandan Shah and Dr. Brennal Pierre, developed the ink, which "is made of medical-grade, bioabsorbable, and biocompatible polymers with carefully chosen high-quality pigments that are routinely used in foods, cosmetics, and other products," Sakhai says.

In addition to the co-founders personally testing the ink with more than 200 tattoos, Ephemeral also initiated an IRB-approved clinical trial to scientifically validate the safety and efficacy of the ink.

"Being the first ever to create a made-to-fade ink left us charting a map in uncharted territory, and naturally that comes with many inflection points where we questioned if we'd ever be able to build a sustainable business—let alone create the ink," Sakhai says.

But the light at the end of the tunnel kept them going. "Every time we'd talk to friends, family, or strangers about Ephemeral, their eyes would light up: 'I can finally get that tattoo that I've been dreaming about!'" Sakhai says. "Their inspiration reinvigorated us to work harder to realize the vision for a world of limitless self-expression where tattoos can be worn to celebrate our own evolution and change."

The process of creating an Ephemeral tattoo, from top to bottom

Getting a tattoo at Ephemeral starts where most tattoo ideas start: with the design. "When a client makes an appointment with Ephemeral, they're prompted to share their design ideas—from a fully fleshed-out concept to certain illustrations that inspire them," Sakhai says.

"From there, our artists create options to present to a client the day of their appointment," he says. Tattoo artists bring iPads to the appointment so the client can experiment with other designs on the fly if need be.

Once someone chooses their design, it's time for the ink to be applied. Most people who come to Ephemeral are in a specific niche, looking for a tattoo that's made to fade. "Those fearing permanence but getting excited by tattoos are our target demographic," Sakhai says.

"Ephemeral was created to redirect the future of the tattoo industry by creating a new category of tattoos—expanding the industry to make it more inclusive and approachable to everyone, including those who were previously turned off by the idea of permanence," he adds. You get a "real" tattoo, but without any of the intimidation or pressure.

Though Ephemeral doesn't offer permanent tattoos (yet), they've already discovered that some may use their service as a gateway to a tattoo that doesn't fade. "We've already found that there is a subset of customers who have played with the idea of getting a tattoo for some time, are on the fence about making that lifetime commitment, and use Ephemeral's made-to-fade experience as a trial," Sakhai says.

For others, the commitment to a design is not an issue, but they've used Ephemeral as a way to test out the placement of the image itself. "We've also had people who know their design to a T but take the Ephemeral route as a way to see where they'd prefer the tattoo," Sakhai adds.

Last year was a year we won't fast forget, and tattoos can sometimes reflect or commemorate the times. So far, Sakhai says people seem to want to be noticed. "We've been seeing a continued trend in fine-line and black work with an increase in visible placements," he says.

In addition to getting ink on places that are easily spotted, Sakhai says people are also bringing their own creativity this year. "We've also noticed an increase in DIY tattoos, likely sparked by the people staying indoors with little else to do," he says.


What it's like to open a tattoo studio during a pandemic

Some might argue that opening a very niche tattoo studio during a time when lots of people are limiting their activities isn't a great idea, but that hasn't been a problem for Ephemeral. "With all of us locked away from human connection for nearly a year and interactions relegated to Zoom calls, there was a shortage of opportunities to feel human," Sakhai says.

"We recognized that being able to enter a new world for an hour or two to experience something as deeply personal as getting a tattoo is the retreat many people were craving," he says. Their appointments are booked out for three months right now, so—guess they were right.

The Artist on a Joyride to the Future
A Coveteur Milestone—We've Turned 10!
Working from Home with Fashion's Favorite Publicist