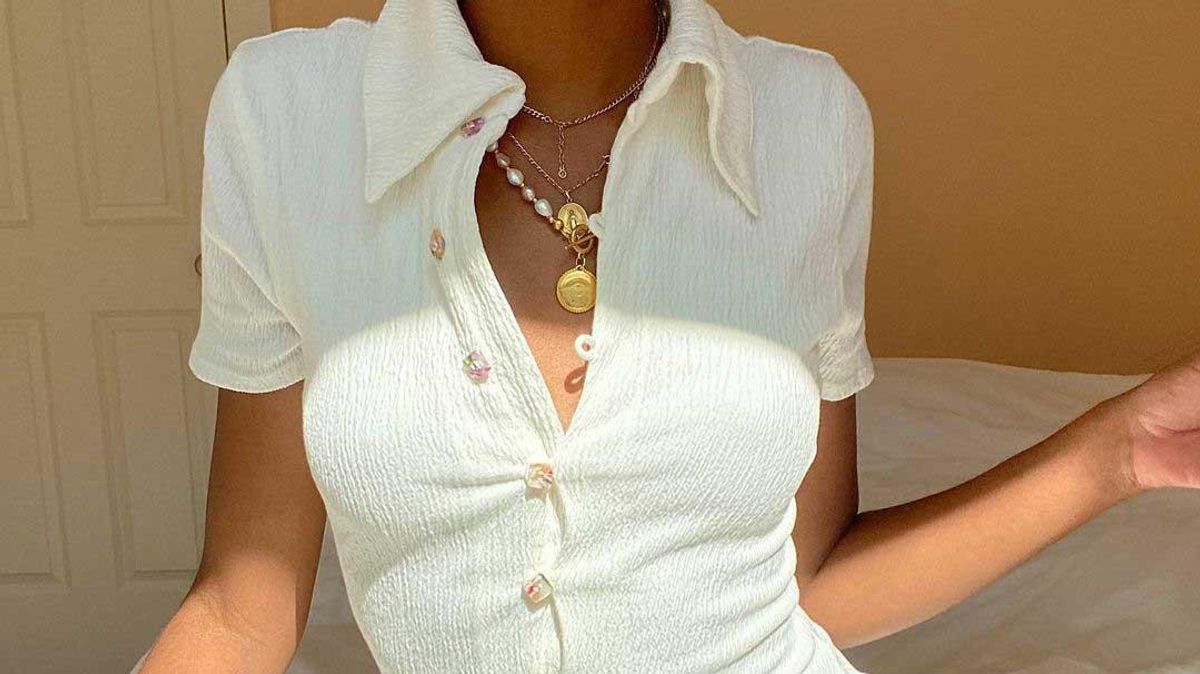 Plus our favorite ways to style them.

Maybe it's the way they remind us of long-ago times or the mysterious mythologies of the past, or maybe it's all in their unquestionable Instagram appeal—either way, vintage coin pieces have taken over the jewelry scene, and we expect them to stay awhile. The ancient-appearing medallions often tout the figures, symbols, or essence of Greek lore, biblical deities, the zodiac, or sunken shipwreck treasures. The pull to the other-realmly charm and fantasy of lost worlds is undeniable, and it's no wonder designs dripping in historical drama are flying off the (virtual) shelves in Bridgerton-era 2021.

One particular allure to coin jewelry is its innate versatility. From statement medallions to barely-there dainty pieces, it's all in the layering—or lack thereof. We're also loving the way a few pops of gold elevates even the loungiest of loungewear. We went ahead and did some digging—or should we say excavating—to find the best coin jewelry pieces the internet has to offer. From protecting St. Christopher to centuries-old Spanish flair, each has a unique story woven through human history or mystery.

With a brand objective to carry the beauty of antiquity to the modern world, all of Agapé's designs are inspired by ancient civilizations and aim to tell a story connecting culture and aesthetic. The Isis necklace is inspired by the ancient Inca civilization. This unique pattern was praised and believed to relieve pain and repel nightmares.

Omi Woods jewelry is handmade with fair-trade African gold and ethical, conflict-free fine metals. The pendants featured on this bracelet tell especially intriguing stories as they were all cast from authentic coins using the traditional lost-wax cast technique. The bracelet's charm selection includes the Queen of Sheba coin, the Pyramid coin, the Ghana coin, and the Trinidad and Tobago coin.

In tarot, the strength card represents courage, strength, determination, compassion, and overcoming obstacles. It is thought that when this card is pulled during a reading, you are abundant with inner strength, personal power, and the confidence to overcome any fear, challenge, or doubt.

The Rania necklace is inspired by South Arabian engravings and represents the Sasanian Empire's royal couple, who were famous for their ambition and courage. Each Agapé piece comes delivered in a vegan leather pouch and gift box.

The Atocha necklace was inspired by the sunken treasures from the 1622 shipwreck of the Nuestra Señora de Atocha. The vessel was a Spanish treasure galleon that sank during a hurricane off the Florida Keys.

The Egyptian stack ties in the mysterious lure of the ancient Egyptian pyramids of Giza with the strength, intellect, and power of Cleopatra, the last ruler of the Ptolemaic Kingdom of Egypt. Both the Cleopatra and the Pyramid pendants were cast from authentic Egyptian coins.

The Miraculous Medal, or the Medal of Our Lady Grace, is a design originating in 1830 in Paris, France, by Saint Catherine Labouré and is said to prepare people to receive grace.

Intentionally imperfect, the Luna design was made to look as though it was "taken straight from an archeological excavation" and also is available as a necklace.

Inspired by 18th-century European paintings, the details of the portrait remain a historic mystery.

The sun symbol is recognized across various cultures as a representation of life, inner strength, and self. In Ancient Chinese philosophy, the concept of duality is represented in Yin and Yang. While Yin embodies feminine energy and the moon, Yang is represented by the sun, the counterparting masculine energy.

Reminiscent of deep-sea treasures, this design, created in celebration of femininity and the female form and shape, feels fit for a mermaid.

The design for the Ulysse earrings was inspired by the 900 BC Etruscan culture, an Italian civilization that came before ancient Rome. As one of the first civilizations with an emphasis on women's value, Etruscan women maintained "essential roles in the society."

Appearing as though they have traveled from another time, whittled down through the journey, the Fedoma Story earrings were designed to tell a tale "reminiscent of childhood."

Ancient Persian ornaments dawning layered circles and dotted gold granules symbolized the hope for love and fertility. The antique Palmyre design also comes as a pendant necklace and a bracelet.

Astrology has deep-rooted ties to human history, with influences traceable to Babylonian times. And while even the most astrologically averse people know their sun sign, this is just the tip of the iceberg where birth charts are concerned. With this in mind, the Zodiac II dawns two antique-style pendants, allowing for the display of multiple signs.

This Riff on the Power Suit Will Be Everywhere Come Fall
Get the Look: 7 Runway-Inspired Looks You Can Wear Right Now
Hot Pants Are Trending—Are You Ready to Embrace the Statement-Making Shorts?

jewelry
Part of the series: