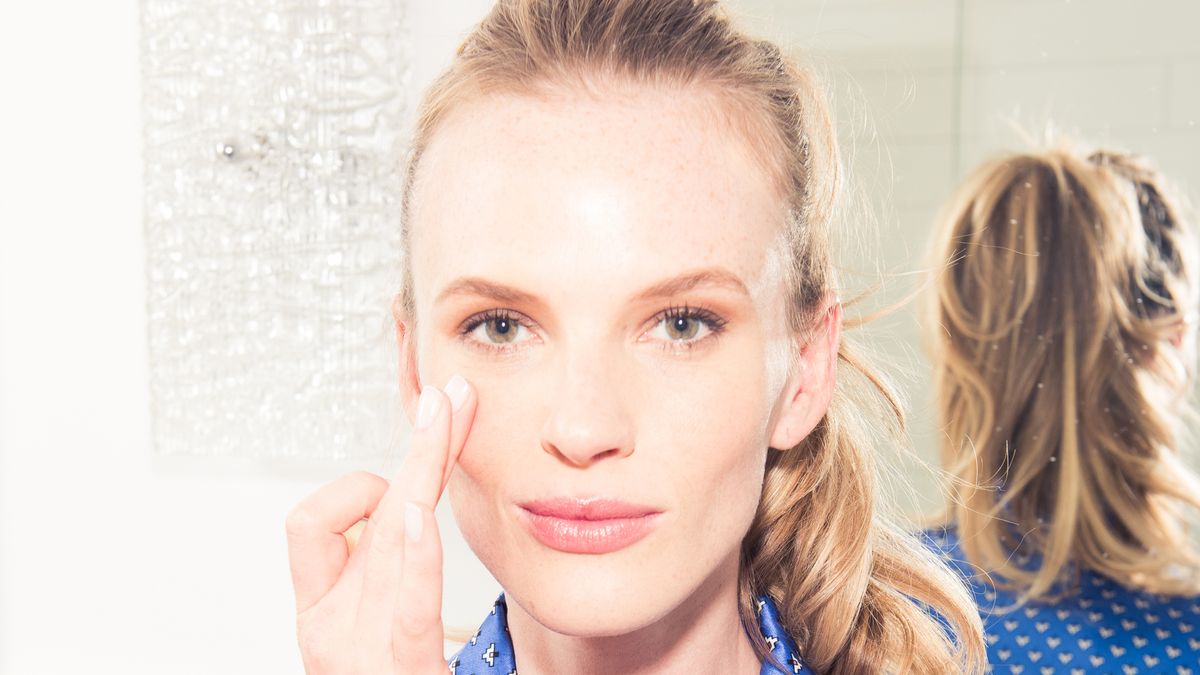 Aestheticians reveal their tricks for safe and gentle extractions at home.

Isabella Sarlija
As teenagers we wandered the aisles of local drugstores in search of anything with the word blackhead strewn across the label. Pore scrubs, strips, alcohol-based toners­—the list of products that promised a flawless complexion goes on and on. But with each new product came the same dull dissatisfaction of realizing our noses, chins, and foreheads were still clogged with blackheads. But what if, all along, we *weren't* even fighting blackheads to begin with? Surprise—those stubborn, pore-plugging spots were actually sebaceous filaments

What Exactly Is a Sebaceous Filament?

Celebrity aesthetician and founder of Renée Rouleau Skincare Renée Rouleau explains that sebaceous filaments are “tube-like structures that lie in the wall of the pores, and the purpose of them is to direct the oil flow that your skin produces to protect and moisturize itself." When these oil structures hit the air, the oil can harden inside the pores (better known as oxidized oil) and cause a plug (that you might think is a blackhead) along your nose, cheek, or chin, forming a sebaceous filament.

According to Athena Hewett, organic facialist and founder of Monastery Made, the difference between blackheads and sebaceous filaments is quite simple. Hewett states, “Blackheads are a plug of oil associated with acneic skin and can turn into acne. Sebaceous filaments are just a natural part of the skin. It is healthy to have [them.]"

Additionally, blackheads tend to look like dark brown or black plugs living in your pores. In contrast, sebaceous filaments are white, grey, or yellow in their appearance and do not have the same raised or dilated appearance as a blackhead. They are just a normal part of the skin that should not trip us up too terribly—they signify that our skin is doing its job at moisturizing itself, and most of the time, they're really only noticeable to us.

Can We Remove Them?

Although sebaceous filaments aren't necessarily anything to be concerned about (at least compared to blackheads), you might still find yourself trying to pick at them from time to time. We get it—anything that clogs your pores and gives your complexion an uneven texture might annoy you, and truth be told, there is a way to remove sebaceous filaments safely. Here are some proper techniques you can do at home to get rid of them.

Take a shower: Our pores naturally loosen in the heat and steam to allow itself to breathe. Yet did you know that the plugs in our pores also soften after a good steam? Rouleau says, “When the skin is cold, any clogging in the pores is like hard butter. When we shower, we increase the skin's internal temperature, which softens [sebaceous filaments]."

Soften further: Although the skin and sebaceous filaments become quite soft after a shower, it's important to keep the skin soft for extractions. After exiting the shower, Rouleau recommends moisturizing the skin with your favorite lotion, cream, or oil to lock hydration into the skin and prevent the pores from dwindling back down to a hardened state. After that, Rouleau says to “cover the nose with a piece of plastic wrap and then take a really hot, damp washcloth and hold the washcloth over the plastic wrap to really make the skin heat up."

Get to squeezing: Understanding where a sebaceous filament lies within the pore is critical for proper extraction. They live ­inside pores, which is why the only way to extract them is to angle your hands and squeeze from the sides and bottom of the pore. Holistic aesthetician Amity Murray recommends, “Wrap your clean fingers (you cannot have long nails in this scenario) in a tissue and gently squeeze the sides of the pore, aiming underneath the pore, using gentle pressure."

Rouleau recommends starting with a width between your fingers roughly the size of a pencil head—this will allow you to go under and around the pore properly and create pressure that pushes the sebaceous filament out. Next, make sure to come at the sebaceous filament from different angles. “The general rule is you only want to squeeze it three times. If you're not having luck after three times, let it be. The key to extraction is ideally creating a dance around, like two o'clock and seven o'clock and maybe three o'clock and nine o'clock."

By no means should you squeeze one spot twelve times as hard as you possibly can. Hewett states, “This is how capillaries become broken. Once you break a capillary, it's broken for life." Keep in mind that the professionals never squeeze one spot ten times during an extraction, so you definitely should not over-squeeze at home. Murray says that if nothing comes out of the pore using gentle pressure, then just leave it alone. Better safe than sorry.

For those hard-to-reach crevices: Sebaceous filaments, and all other pore plugs, seem to reside most often where we can't reach them, like the crevice of the nose. Rouleau explains, “With spots like the crevices of the nose, the skin is indented, so sebaceous filaments are even deeper in the skin." To remedy this, take a tissue and ball it up as tightly as you possibly can. The next part sounds strange, yes, but bear with us: Shove the balled-up tissue into your nostril. Says Rouleau, “You're going to create more damage to the skin if you're having to wrestle with it." This technique allows for the normally indented skin to expand, which makes squeezing it easier.

Rouleau does recommend curved metal extraction tools, but stresses using them the same way you would use your fingers: with little pressure and on warm, moisturized skin.

After the Squeezing Is Done

After you’re done with your extractions, you are going to want to replenish the skin, especially since you might look a little red and irritated from all the squeezing. Rouleau recommends a gel-based calming mask, as this will calm any “redness that was created from a little trauma messing with the skin.”

Additionally, you can prevent sebaceous filaments through a consistent skin-care routine—that means every day and night, no matter how tired you feel. “To minimize sebaceous filaments (a much safer alternative to peel off masks, pore strips, and at-home extractions), use a good BHA or salicylic-acid product, practice oil cleansing, and use ingredients like niacinamide, zinc, sulfur, and pimple patches," says Joi Lin Tynes, NYS licensed aesthetician and wax specialist at Skin Delush Skin Studio. “All these 'hacks' help absorb sebum and minimize those hair-like sebum plugs over time. Pimple patches help absorb sebum, so they would definitely be a safer alternative than smashing your fingers together on your face."

So there you have it: clear, texture-free skin that your 15-year-old self would be proud of. Just remember, this is a delicate technique often performed by professionals, so if you're having trouble performing extractions painlessly, Murray suggests, “When in doubt, [keep your] hands off your face."

How to Safely Do Extractions at Home
My Secret to Smooth, Blemish-Free Skin Costs Less Than $5
Exfoliating in the Winter Can Be Tricky–Here’s How to Do It Safely
From Your Site Articles
Part of the series: