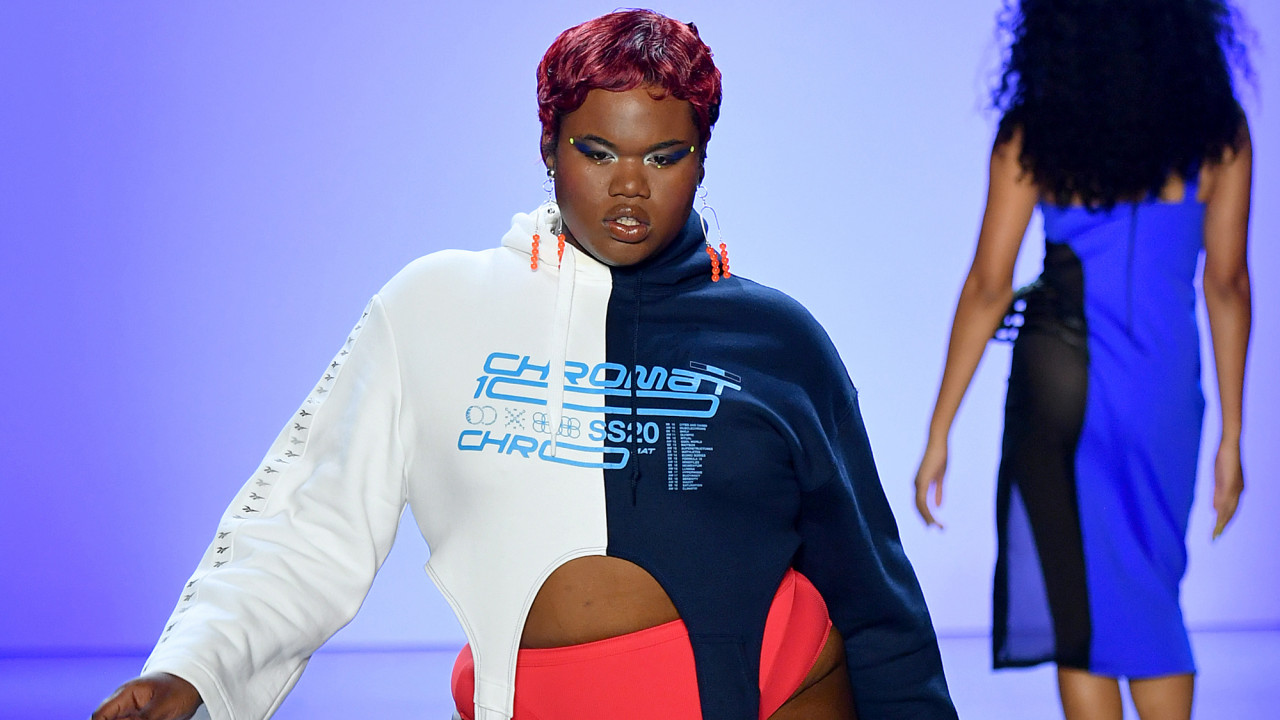 The Issue of Representation of Black Bodies in Fashion

We asked four young Black people to address the problem and offer guidance for the future.

If you’ve been following fashion for the past several years, chances are you’ve noticed that brands at all price points have been gradually making concerted efforts to represent Black bodies. While the increased presence of Black bodies in fashion has generally constituted a positive change, it is evident that there are still a few glaring issues with both the quality and quantity of Black representation in fashion. For example, it seems that the world of high fashion has taken to casting dark-skinned Black models—and dark-skinned Black models only—which has ironically flipped the bias traditionally referred to as colorism. In fact, one needs only to perform a perfunctory browse through Vogue Runway to find that the world of high fashion does cast Black models, so long as their skin is dark and they are thin. While brands like Fashion Nova and Uniqlo do a much better job casting Black models all along the spectrum of skin tone, they often choose to represent either Black women who are thin and have white features or Black women who embody the “Mammy” archetype, which reduces plus-size Black women to an identity tied only to their physicality. And though it is true that there are Black people who are thin and have “white” features, and Black people who are overweight, it is also true that there are Black bodies which exist everywhere in between—and beyond—this dichotomy.

Since the murder of George Floyd and the rise of the Black Lives Matter movement have catalyzed meaningful introspection concerning the inequitable treatment of Black Americans across all industries, it is obvious that the time for fashion to further its commitment to the genuine representation of Black bodies is now. With that in mind, we asked four young Black people to address the problem and offer guidance on how fashion brands, and the culture of fashion as a whole, can most genuinely move forward.

Nadaya Davis, an arts, culture, and fashion writer and student at the University of Chicago, thinks that issues with the representation of Black bodies in fashion start with the very pretext upon which the fashion industry is based. “There are key issues with how Black folks are represented in fashion. How does one push true representation on an industry that doesn’t represent reality at all? It’s a system that’s inherently flawed. The thing about the modeling and fashion industry is that everything needs to be exceptional. Beautiful. Ethereal. Untouchable! When brands use bodies that they deem exceptional as the face of their ads, it comes off as ‘Hey, look at us! We can be beautiful, too!’ It’s not ‘Hey, we’re people. This is what different people look like.’ I think that’s why marketing tactics in the fashion industry so often fail at their attempts of body positivity or come off as insincere; these models are still hand-picked by a staff of people who deem them ‘worthy enough,’ and there will always be people who won’t be. It’s especially true with Black bodies, because there are much more sinister factors involved. You have the white woman who, when her body is deemed ‘acceptable’ by the brand, is definitely in. Then you have the Black woman; you think about her skin (is she too dark? is she too light?), her hair (is it too kinky? is it too loose?), her features (are they too Euro-centric? are they Euro-centric enough?), her body (is she too thick? does she have a waist?).”

And complicating matters even beyond the fact that the fashion industry is one in which exceptionality is, well, not exceptional, it is clear that Black bodies are seen as “representable,” particularly when they fall under a few distinct categories. Model Kendra Austin says, “I find that the depiction of Black bodies in fashion media is largely rooted in exoticism and fetish—and is, frankly, lazy. There are a few ‘acceptable’ versions of Blackness, notably all thin, that are welcome—the visibly mixed, the dark-skinned African model, the freckled model. These are all gorgeous forms that Blackness can take, but are not reflective of what the average Black American looks like. Are we not interesting enough? Further, I find that the exoticism of these casting choices lends itself to lazy art direction. Black models with fetishized features get fewer options for wardrobe, hair, and makeup because ‘they’re perfect enough already,’ which is actually another way to say ‘we cast them so we wouldn’t have to do the work to present them in imaginative ways like everyone else,’ and this mentality shows. As a fat Black woman with small breasts and an average hip-to-waist ratio, I seldom see other models with my shape. Most curvy models exemplify ‘the Birth of Venus’ type—tan to brown, tall, huge chests and hips, and an itty-bitty waist. This is what Black women are to many. I rarely see size 14 dark-skin models unless we’re talking about the exception or the exotic. Editorial/high fashion loves to use a singular size 8 racially ambiguous Black person on their runway and call it an inclusive show. It’s incredibly disordered—size 8 folks at home shouldn’t be told they’re abnormal when they can find almost all clothing in their size and aren’t systematically oppressed, but what are the rest of us size 14 folks supposed to think of ourselves if THAT is inclusive?”

The reluctance to equitably cast a realistic range of Black models has real consequences for the countless Black people who do not fit into the strict confines of fashion’s ideas of Blackness. Ashe Turner, a dancer, model, and influencer, says, “As an alternative Black girl, I don’t see myself represented in the fashion industry. There’s almost no Black representation in alternative fashion. I am definitely privileged because I am skinny and have light skin, but having locs definitely makes some people see me as ‘too Black.’ I don’t fit neatly into any Black stereotype, so growing up I had to find my own path due to lack of representation.”

Then there are the nearly insurmountable obstacles that gender-nonconforming Black models face—obstacles which come in addition to, and not instead of, the barriers that cisgender Black models already grapple with. Kendra Austin continues, “I’m seeing a shift in the industry to include nonbinary and gender fluidity, which is a [millennium] overdue, but it seems that queerness is only allowed when it’s thin and white or racially ambiguous. I want to see more fat, Black, queer, and gender-defying folks in these campaigns. They exist, and erasure is no longer acceptable. Black Coke-bottle-shaped femmes, like your caretaker and favorite best friend on TV, are just a slice of the Blackness pie.”

Being a firm believer in the idea that one should only offer criticism if one can also offer solutions, I asked the young creatives I interviewed to suggest next steps for the fashion world. And because these solutions come directly from young Black creatives who have firsthand experience navigating the challenging landscape of being Black in fashion, you can be sure that they are not idealistic or unreasonable.

Cameron Reed, a burgeoning fashion and conceptual art photographer, offers a broad invitation for industry-wide change, saying, “As a photographer, influencer, and creative, the best advice I could give to them is to be more open to letting Black creatives in. There is a lot of gatekeeping in these industries that keeps them exclusive. That’s my best advice; be more open-minded to looking past skin color and stereotypes. At the end of the day, it’s up to them if they want to change. We just need to have people that look like us that are in high places already to help push for even greater change since they have influential voices.”

Austin says, “The most pressing issue is not the diversity, but the equity. Inclusion is not just casting a Black body, or a fat body, or a queer body, but providing equitable resources for that person to do their job well, factoring in the leaps and bounds they made to get into the room. We need stylists who can fit our bodies, we need hairstylists who can handle our textures, we need makeup artists who work with our complexions. There are too many talented creatives in this industry to be hiring folks who refuse to do their jobs. To be clear, it is refusal to learn and evolve, and we shouldn’t be supporting laziness. I walk on set and depend on these people to do my job as the lowest on the totem pole. I’m sick of having to correct ‘experts’ in their craft when fairer and thinner models don’t have to. Now I’m doing three to four jobs without their day rate.”

And to any company working in the fashion arena, Austin lays out six concrete steps that can be taken to create a less hostile and more genuinely inclusive space for Black models: “Prioritize Black talent in the immediate future; vet clients for racist and colorist casting processes; make sure that Black models are being paid appropriately; make sure that there are makeup artists, hair teams, and stylists who are capable of working with Black bodies, tones, and textures on set prior to sending a model to set; launch an internal task force to prioritize the hiring of Black people in leadership and booker roles; and partner with a greater number of small Black businesses and clients.”

It is true that the landscape of the fashion/modeling industries has changed dramatically in the past few decades, but of course, there will always be room for improvement in a line of work that is founded on fantasy instead of reality.

Can Loving Fashion Actually Be an Asset in the Fight for Sustainability?
How Fashion Weeks Around the World Are Adapting
What Will Fashion Look Like After the Pandemic?