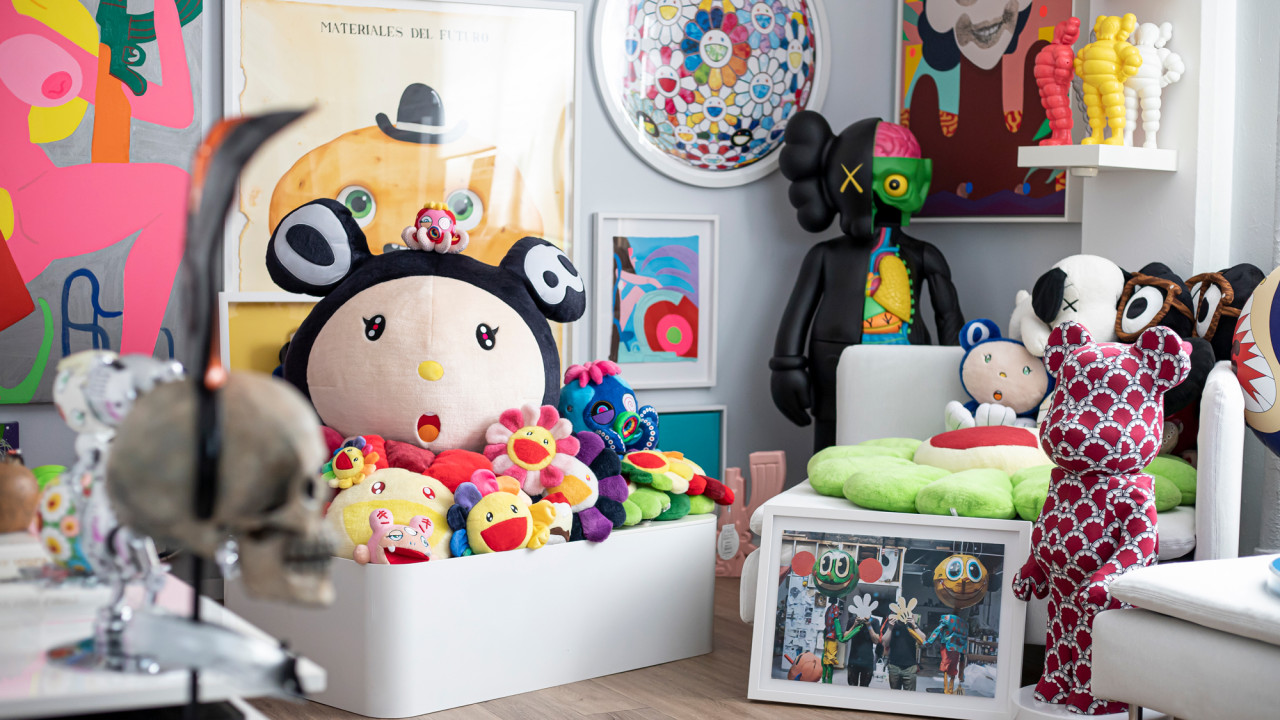 Meet the Collective That’s Changing the World of Art Collecting

Allow us to introduce you to League OTO.

Imagine having a living room filled with Takashi Murakami plushes as throw pillows, numerous Kaws figures on your shelves, and some of the most abstract paintings and prints money can buy. Well, for four men of League OTO, they don’t have to. Pretty much started by a group chat, Gambriel Wills, Demetrius Butler, Jay Montalvo, and Jason Lee have created their own lane in the art-collecting scene—it’s no wonder that OTO stands for ‘Of Their Own.’ Generating a serious bond and friendship over their love and passion for art through Instagram, these four young men have become one of the hottest things in the art-collecting world.

Back in March, the art collective held their first exhibition, “League Homes.” The four-day exhibit showcased their own personal collections while offering visitors a welcoming home vibe by decorating the space with all of their own artwork. While their second exhibit has been currently postponed until next year, the collective has been hustling nonstop. And with new merchandise on the way and their first collaboration sculpture with artist Greg Bogin in the works, we caught up with the collective to talk about their start, what they’re collecting, and the major changes in the industry. 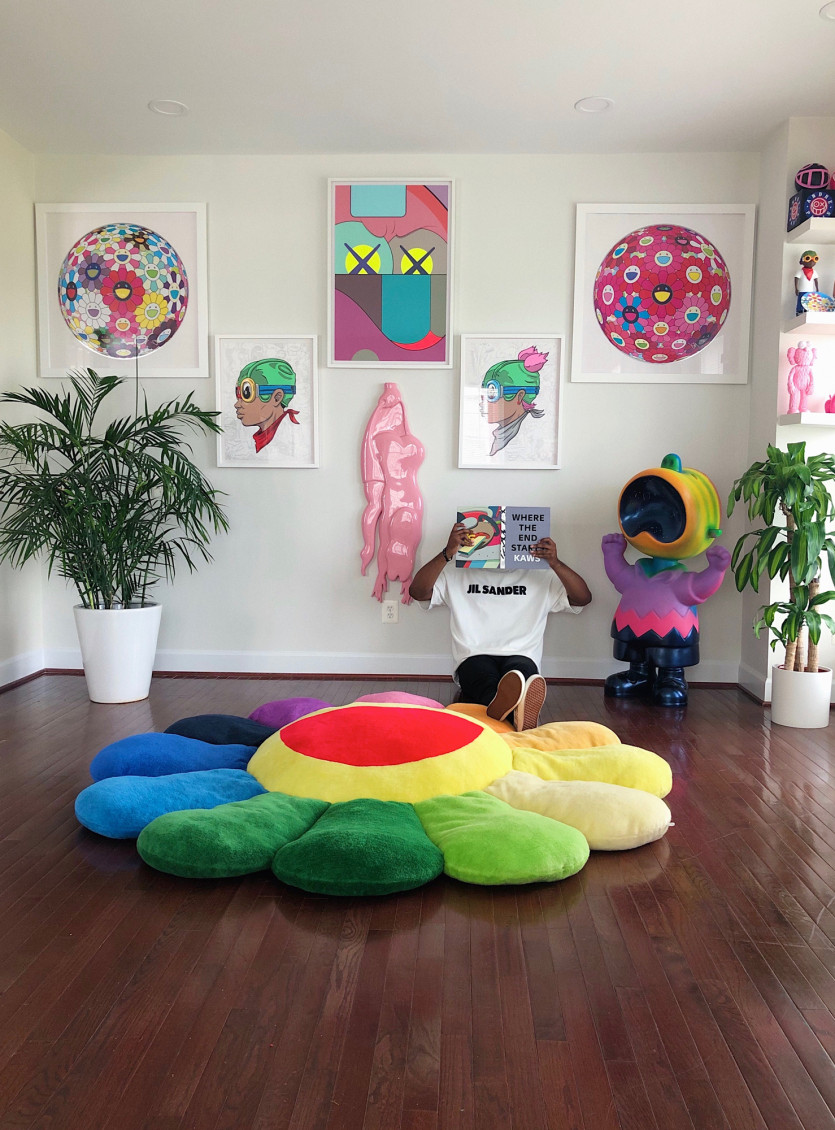 How did you start your collective?

Gambriel Wills: “Demetrius and I went to high school together, so we already knew each other. Then we met Jay and Jason on Instagram. We went to a Kaws show together in Texas, and we started a group chat just to keep in touch. Somehow we just became a thing; we kept getting bigger, and then we were known as a group, so we started going to more places together and it just kept going from there till we somehow got here. Basically all off of a group text, to be honest.

“That’s how it really started. We had no plans or any of that type of stuff. We just became friends trying to collect and create a common bond, to be honest. Because a lot of people our age weren’t really collecting art like that back in 2016. It’s a boom now, but back then there weren’t really as many collectors as there are now.”

On a personal level, where did your collections start? How is it collecting in this climate?

Demetrius Butler: “I started collecting in like, ’06 or ’07. I don’t really remember what made me start, but I was a fan of Pharrell and I remember Nigo and I would just Google the stuff that they were doing, and I remember seeing all of this Kaws stuff. So one day I just went on eBay and bought a bus stop, and that started my collection of Kaws toys, and then I just kept going from there and haven’t stopped yet.

“Probably the difference between then and now is I collect more so with a focus. Then, I didn’t care—it wasn’t really about making money or selling things. I just thought stuff was cool. I never in my life thought I would collect art and make money off of it. I just really thought stuff was cool. Now it’s not so much that I think I’m going to make money off of it, but since I am spending more money, I have to be more smart about what I’m buying.”

Jay Montalvo: “For me, I always envisioned my house like Pee-wee’s Playhouse with that same craziness and that scenery everywhere. So when it comes to collecting, that’s how to envision certain pieces to come into my collection. It’s all about passion, and then the value is last. That’s my main focus. Especially now, with having kids, as they grow up I’m trying to bring them in and enjoy it with them. I’m not too heavy into buying this and that just because, I just go at my own pace now, like a little turtle. It’s just for fun, just for passion, but now even more for the family—I get my kids’ opinions first more so before anybody else’s.”

Jason Lee: “The first piece I think I ever bought was Shepherd Fairey’s Obama Hope poster. I grew up in San Francisco, and Shepherd Fairey and his Obey street art was all around us, and I just didn’t really put the recognition of what I saw in the street back in the art back to the artist until the Obama poster came out. Then I moved to New York City. Street art was always something of interest—being in New York, I would see it all the time. I’ve always been kind of more design-centric in a way, so I think it was just merging what I would see in the street and how I would want to decorate my home. As I grew professionally, I had more of a disposable income, so it just made sense to bring more art and to gain an opinion to the things that I would want to surround myself with on a daily basis. But it kind of all started from that Hope poster.” 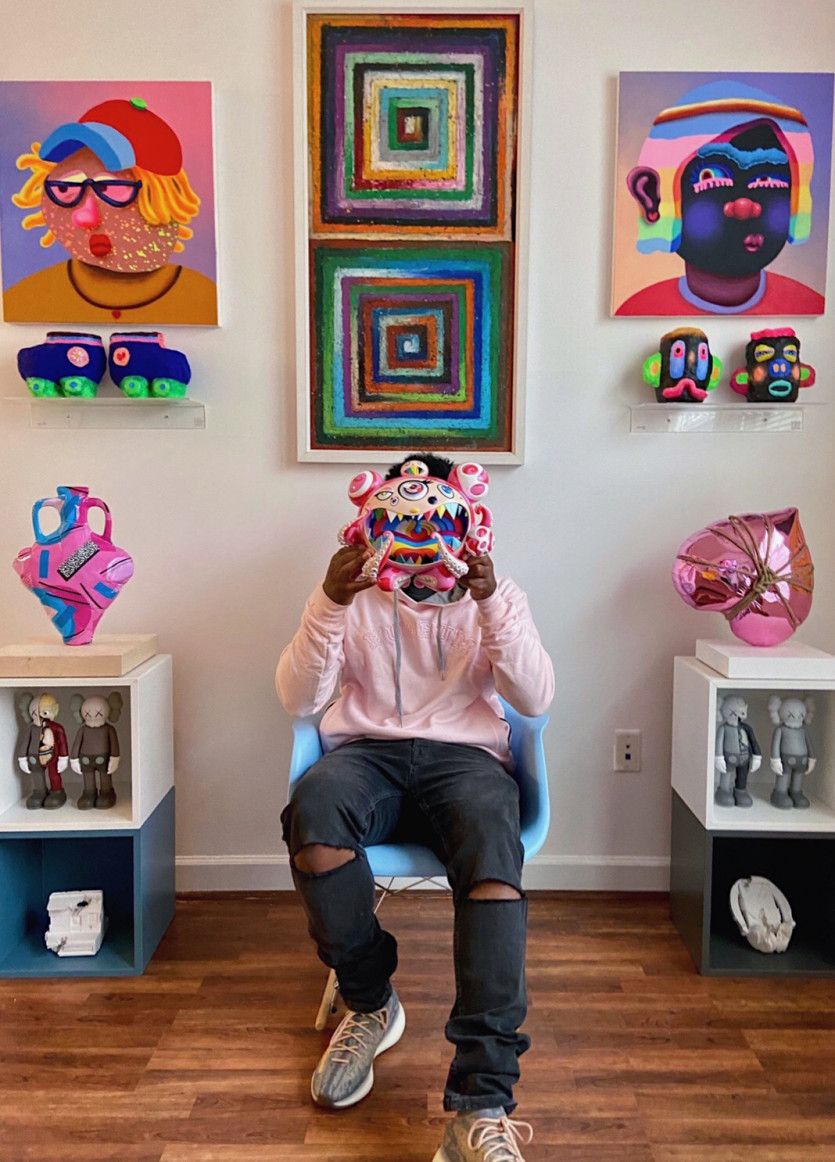 When art is something you should experience in person, how have you managed doing what you do in this climate?

GW: “It’s been hard, to be honest. We wanted to have our second exhibit in Chicago this summer, and we had to put that on hold until next year. We don’t really like to do virtual [exhibits]. Our exhibits are more about being around people, enjoying art, explaining, and really teaching—giving people who aren’t into art an open space at full range and introducing people to new artists. It’s hard to do that virtually. We’ve had offers to do it, but it just doesn’t feel right—we’re for the people, so we need to be around actual people to be able to feel the show. Now we’ve just been working on a lot of projects. We have our marketplace in the works along with our sculpture with Greg Bogin, as well as an exhibit at Art Basel if it’s set to happen.”

How has collecting reflected the way you shop and look into buying?

GW: “[Buying art] is kind of like how sneakers are now. It takes so much to just get a pair nowadays. That’s how art is trending now, where it’s really hard to get pieces. You really have to know somebody or be on the in with somebody. When we were younger and Sauce (DB) started out, people used to make fun of him because he was collecting art, and we’re always collecting shoes and clothes.”

DB: “Back then I never missed a Kaws release, ha ha.”

GW: “Yeah, of course, because there was nobody collecting then. He could just log on and buy whatever he wanted because people didn’t care that much. But now you log onto Kaws, and it’s basically like being on SNKRS. You have to be there at 12, pray that you can get through with three computer screens open. Art has almost taken the same place as sneakers in terms of pop culture now. Everyone is a reseller, so even if they’re not into art, they know they can sell it. That’s a big change in art that a lot of people say we contributed to—we don’t really take the full blame for that, but we get a lot of blame from older people and collectors in the art world for appealing to a younger crowd who like to resale.” 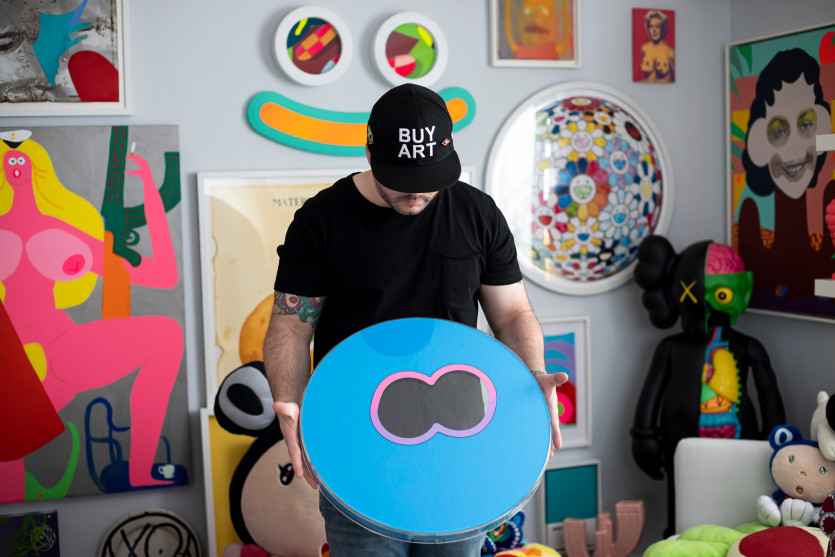 What attracts you to a new artist to where you want to put them on your platform?

JL: “I’m usually looking for something distinct, something that is unabashedly that person’s identity. If I see it, I’ll know who it is even if I’ve never seen that piece before. While somebody who replicates another style or someone that does general landscapes—things that aren’t that remarkable—I don’t pay that much attention to.”

DB: “The way I collect is kind of different. I’m into art, but I’m not into art. I do look at art all day because it is what I like, but I’m not one of those people who are constantly trying to find something new. Most of the time when I do find something new, it’s probably from a collector I trust or like—and it’s instant. For most of the stuff that I have when someone shows me a new artist, I like it instantly. I’m simple; if it’s a pretty picture and I like it, I don’t have to research it, find out where they went to school, who’s buying—none of that. I’m like, ‘Look, Gamb, I like this, let’s see how much it costs.’”

How has social media changed collecting?

DB: “With my collection it would probably fall in the ‘hype’ category, people always say it’s hype. I look at hype differently. I think people make hype more than the artist do. People will run to an artist, and then it’ll be labeled as ‘hype art’ when in reality a bunch of people just have their attention on it. With Instagram, it’s so easy. When I first started collecting, I didn’t know how to get in contact with anyone from Kaws, which is why I don’t have a bunch of Kaws OGs. At the time I had the money to purchase them, but if I would have had the access and the knowledge, I guarantee I probably would have had 20 of them. But in ’06 there was no Instagram—and I would be on forums, but even then they weren’t that informative where it would say ‘you can buy this from here’ or ‘go talk to this guy and that art advisor.’ Now, with Instagram, everything is a DM away. The artist and the gallery is chasing the art collector just as much as the art collector is chasing the artist.” 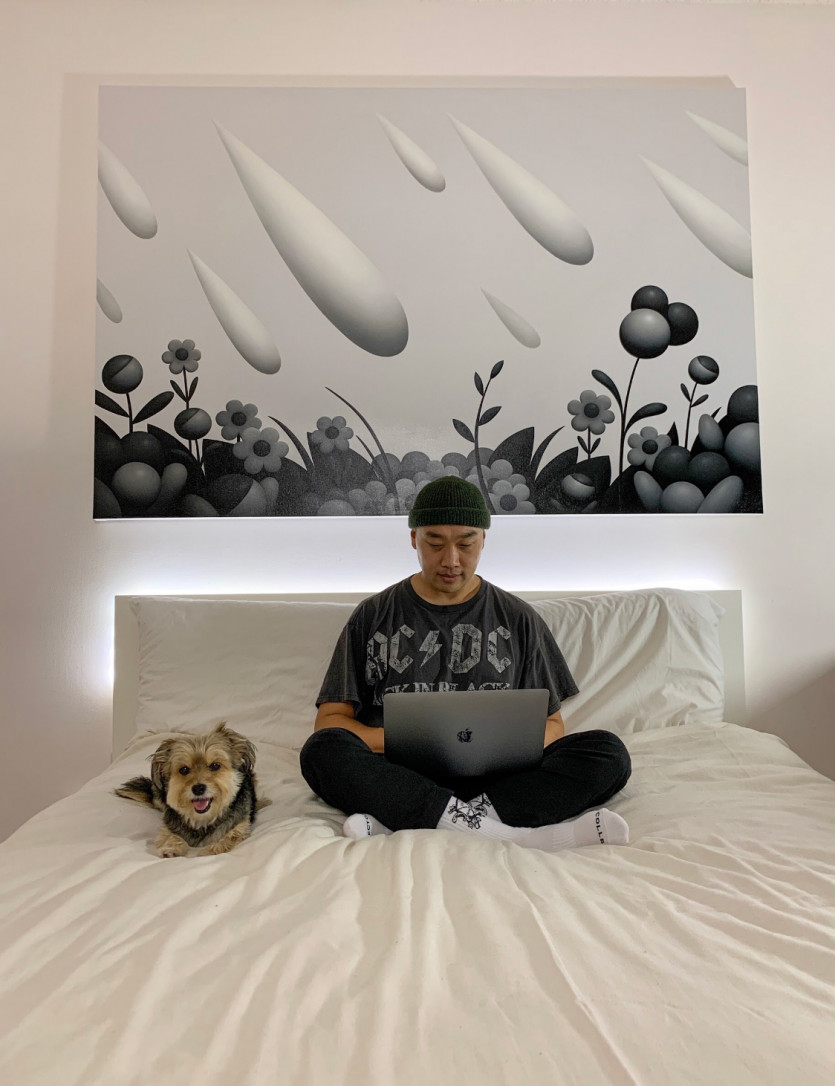 You all started pretty young; what advice do you have for a person wanting to start collecting?

GW: “You need a unit to collect at this time. You know the saying it takes a village to raise a child—you need a village if you really want to be a collector. OR you need a whole lot of money and they’ll just come to you. But you have to actually buy things. All of us have bought things that we really could’ve lived without, but we had to show some love to the gallery. It’s definitely a give-and-take, but you’ll always come out on top. The key is really to buy for the love. You want to love it, you want to see it in your house every day. You shouldn’t buy just to sell, you should buy it because you love it.”

What is one piece that has really spoken to you?

JM: “It’s a piece by Paul Insect. He’s one of my favorite artists, and this was the first painting I was able to afford, and I was happy that it was done by him. I got it on my birthday, which was a big plus. But it’s different because I started out collecting figures and toys, things like that. Then I went to print, but this is one of my first major original pieces that I could own, so just knowing that I could achieve the goal of buying one of his paintings and having it hung in my house that I really love, that’s like a game changer. It changes your focus on what you want in your house.”