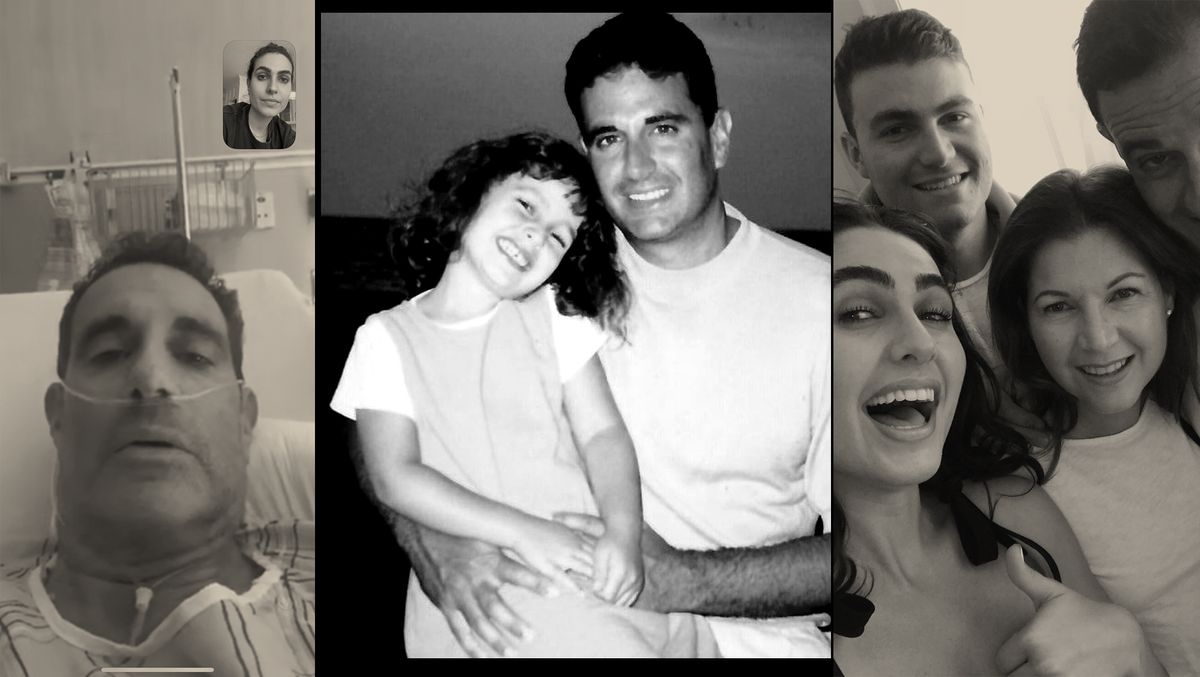 Millennials and Mortality: What They Don’t Tell You on Instagram

An essay from actress, on-air host, and writer Ali Weiss.

When we first dropped him off, my mom and I felt relieved. We were under the impression that, thanks to his age and the supposed wonders of malaria medication, his visit would be short and only mildly unpleasant. He was 58, never a smoker, and played a weekly basketball game at Baruch Middle School until last year. But his condition worsened as one night turned into two and then three, and by day five he was still burning with a 102-degree fever, wheezing, and hooked up to an oxygen tank. Too weak to shower, go to the bathroom, or remain optimistic, my dad thought he was going to die.

The symptoms of coronavirus are not what brought us the most grief, though; it was the inability to comfort my dad as he suffered. He was the only person in an empty room at NYU Langone, quarantined even from others who were sick; the sum total of his daily human interaction was a nurse checking his vitals or delivering medication. Spoiled by my mom’s penchant for multi-course Italian meals, he was now sustained by Ensure nutrition drinks. I’d call to catch him up on Tiger King and try to get a laugh, but was met with lukewarm responses gurgled out of liquid-filled lungs by a voice that couldn’t hide discouragement. I’ve experienced much rejection in my acting career and can always rely on my dad’s enthusiasm as an audience member. Realizing I was incapable of making him smile made me feel I had failed as both an entertainer and a daughter.

I work as a “digital content creator,” clocking hours on social media. In pursuit of followers and sponsorship deals, I’ve solicited sex advice from my grandmother, passed myself off as a spokeswoman for bidets, and extolled the mood-enhancing benefits of weed suppositories. I’m only slightly ashamed to say I’ve cultivated a shameless persona. But even I am taken aback by the way quarantine has become a tweeting, TikTok-ing, thirst-trapping rat race obsessed with viral fame. Disregarding constant updates about the overburdened hospital workers, failing economy, and death toll, models dance in skimpy clothing, comedians go live on Instagram, and expectant mothers complain about canceled baby showers and the “worst nightmare” of giving birth alone. With all the uncertainty about the economic future, there’s a desperation amongst young people to stay culturally relevant. But making content also seems like a plea to stay alive. In 2020, being “alive” transcends simply being conscious: it’s experienced through a black glass iPhone lens, proven through constant self-documentation, and fueled by a stream of silent compliments that come in the guise of likes and hearts. An individual’s two-dimensional image—aesthetic, vibe, “brand”—is more important than his or her physical form, especially right now, when emotional intimacy literally requires screens. This increase in content creation is not due to boredom—it’s a response to the unrelenting talk about COVID-induced death. Millennials are being forced to prematurely confront their own mortality and, as a result, feel pressure to leave a legacy: a trail of photos, videos, and 280-character anecdotes that will live in the cloud forever. A friend of mine recently said she was “afraid of dying before getting verified.” She wasn’t joking, and I wasn’t either when I agreed with her. Verification would be validation that our existences had meaning, that we mattered. When I saw my father, with all of 10 followers, look for the same answers alone in a hospital bed, I felt something I didn’t know before in my public persona: shame.

On Dad’s fifth day of hospitalization, I posted a video about it—and was once again taken aback by the response. While the public comments burst with well wishes, private DMs had people demanding bullet-point lists of his symptoms to look for in themselves. They wanted my opinion on hydroxychloroquine and the efficacy of eating cloves of raw garlic for immunity. They asked how we managed to get our hands on tests. (We didn’t.) Very few acknowledged his solitary confinement or my fear of him dying alone, and nobody inquired about building mental immunity—how to prepare for someone you love becoming deathly ill and not being able to do anything about it. The emotional effects, in my experience, last longer than coughing fits and loss of taste, and no influencer hawks a product that will make them go away.

On day six, my father’s fever finally broke; by day eight, having proved he could breathe without his oxygen tank, he was discharged. His body had survived, but his eyes were dead. Six-foot-one and big-boned, he was 15 pounds thinner, his skin visibly loose. It took days for him to process that he was using his spirometer in a king-size bed and not a hospital cot. He slept and wept a lot. Between naps he’d shuffle slowly to the living room couch, where he’d stare into the distance, then begin to cry.

“I thought I’d never see you again,” he said.

I still wasn’t allowed to hug him.

Two months later, things have returned to some version of “normal.” Dad has color in his face as he sits at the dining room table, reveling in my mother’s pork chops and bothering her for a second glass of wine. We are grateful to be isolated together. But when he gets up to clear the table, I notice how much thinner his hair is, the way his hands shake, his halting gait. We’ve discussed where to put his ashes should anything like this happen again. (The basketball court at Horatio Street Park, of course.) I can only imagine what he’s thinking. Unlike millennials, he doesn’t feel compelled to volunteer his emotions.

My father is ruthless, resilient; he’s made the most out of life. But after facing death, his will never be the same again. Of all the pills he’s taken, that remains the most difficult to swallow.

Ali Weiss is a New York-based comedian, writer, and host of the Health Is Hell podcast.