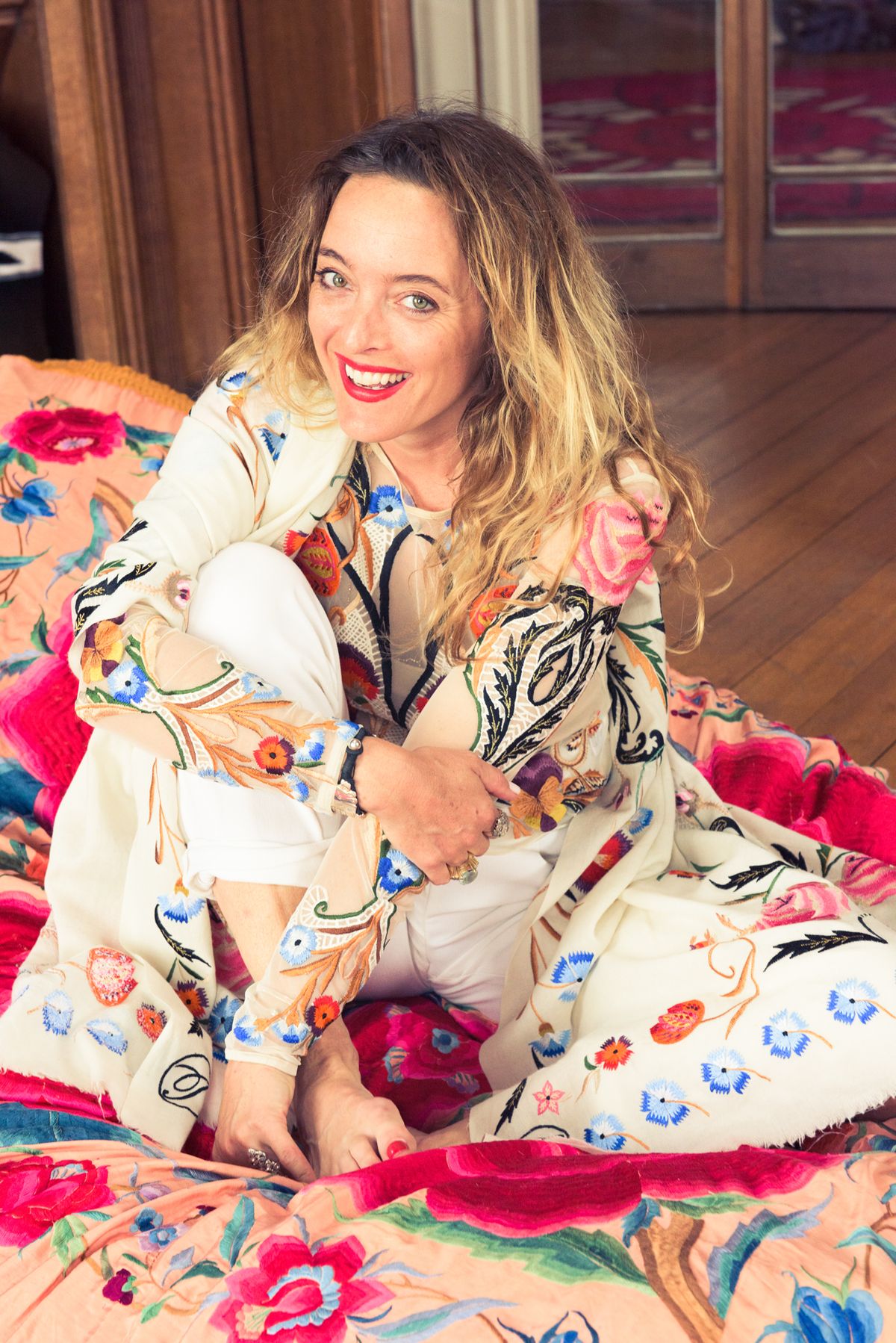 Our shoot at the designer’s home was quite literally one for the books. Somerset, England.

Four years ago we released The Coveteur: Private Spaces, Personal Style, our book exploring the homes and wardrobes of some of the world’s brightest fashion luminaries. A handful of the stunning closets from the tome have never been published online—until now. Today we’re taking it back to July 2015, when we had the pleasure of shooting with designer Alice Temperley at her English countryside estate.

We like a good story. Especially one that is told to us as we’re getting cozy on a velveteen teal couch strewn in a cavalcade of patterned pillows and throws—a scene that isn’t all that surprising when you’re sitting on the couch of the storyteller herself (and the woman behind those whimsical dresses you, Beyoncé, and Kate Middleton have been hoarding), Alice Temperley.

We bet you’re wondering how we ended up here, so let’s backtrack a teensy bit. After a three-hour-long train ride to the county of Somerset, and a subsequent cab ride down a seemingly never-ending winding road, interspersed with 100-year-old willow trees and just as historic estates, we found ourselves outside the Cricket Court mansion, an estate with a long-reaching past—as in, in 1066 William the Conqueror gifted the demesne to his brother, and it was eventually purchased by media tycoon Lord Beaverbrook and visited by Winston Churchill and General Eisenhower while planning D-Day. Like we said, there’s history there. And its front lawn, peppered with Tim Walker props and ruins of the Plantagenet Castle in its gardens, is exactly the juxtaposition Temperley exemplifies herself: classic, romantic, yet artfully quirky.

The same went for the interior, which, if we had to, we could pretty much only describe as a bohemian paradise. As in lived-in patina leather couches, which sat under the domed oak-paneled library, were abandoned for the mammoth pillows that lay on the floor just calling for a sit-down and chill. For the record, we did. Let’s just say the shelves weren’t without similar sentiments—hand-painted tchotchkes and storied knickknacks lined almost every surface, and Temperley’s quintessential disco balls also made their casual appearance. The whole thing was ripped from the pages of Alice in Wonderland.

As for the real pièce de résistance—her wardrobe (like we said, there really was a reason we ventured here in the first place). Think copious amounts of floor-length floaty gowns, delicately embroidered sheer lace blouses, Nicholas Kirkwood and Charlotte Olympia heels, and the occasional tutu—yeah, what were you expecting? There was the vintage, too, interspersed among her namesake pieces. And as we made our way to her basement, talking summer parties (BTW, she’s kind of famous for them) and a mutual appreciation for hats, we uncovered racks on racks of archival pieces even we had never seen before. The only place we didn’t explore? The ancient Tudor bear-fighting pen the mansion sits atop—we’ll leave that one to the history books.

Our shoot at the designer’s home was quite literally one for the books. Somerset, England.


Love what you see? Order a copy of The Coveteur: Private Spaces, Personal Style here, and shop pieces inspired by Alice Temperley’s closet below.
1 / 15
Temperley London Effie Gown, $2,695
Want more stories like this?

Are You Sitting Down? Tamara Mellon Opens the Doors to Her Shoe-Filled Closet
Inside Mara Hoffman’s Closet—A Sea of Vintage and Namesake Pieces
The Designer Perfecting Shirts Has an Enviable Wardrobe of Her Own
Part of the series: