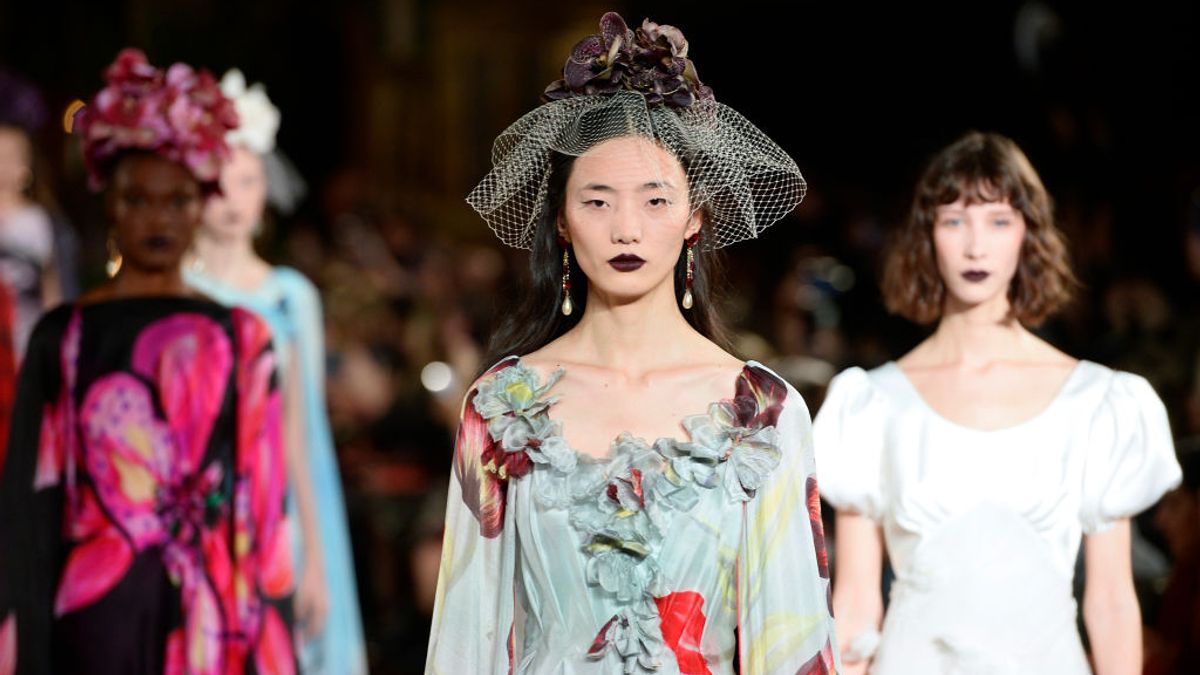 The runways did not disappoint this season.

Hannah Baxter
New York Fashion Week has officially come to a close (collective sigh), and the last six days have given us a lot to consider for the season ahead, especially when it comes to beauty. While there was still a sprinkling of minimalist no-makeup makeup and fuss-free hair, for the most part, artists really brought the drama. Whether it was a riff on Winona Ryder as the vampire wife of Dracula at Rodarte, or multiple variations on the classic ponytail at Jason Wu, Prabal Gurung, and Brandon Maxwell, there was no shortage of beauty eye-candy on the runways this season.

Ahead, the top four makeup and hair trends we predict everyone will be wearing come fall—and don’t forget to shop the key products the artists used to create the looks backstage.

We’re always excited to see an electric-colored eye shadow on the fashion week runways, and this season turned up in a big way. Makeup artists Fatima Thomas at Chromat, Daniel Martin at Tadashi Shoji, and Laura Parsons at Self-Portrait all created variations of this standout look with neon eyeshadows in electric blues, oranges, yellows, and reds. No shade was too risqué for fall/winter ’20, and although we might not re-create these showstopping looks for ourselves come fall, a flick of lime-green eyeliner on our top lids might just be our new go-to.
Buy Now
Buy Now
Buy Now

As soon as we heard the words “vampire bride” backstage at Rodarte, we knew a trend was germinating—and fast. Several designers from LaQuan Smith to Anna Sui embraced a dark, moody lip in various shades of burgundy, cranberry, or mauve to accent their collections. While red lips reigned as the most popular hue of the week, we’re partial to this vampy look, especially for the fall, when our wardrobes make the transition to structured coats and cozy sweaters. Whether you love a warm brownish undertone or are a fan of a cool blue base, there’s a lipstick, gloss, or stain out there for you.
Buy Now
Buy Now
Buy Now

When makeup artists weren’t turning up the drama with eyeshadow, more often than not it was a graphic liquid eyeliner that ended up on the runway. At Rag & Bone, makeup artist Lynsey Alexander took the intergalactic tribal inspiration and debuted an extreme wing on an otherwise bare and dewy face. Luis Casco extended the liner on the outer eye for models at Monse for a look that he called “Cleopatra punk.” And at Christian Siriano, Erin Parsons lined the eyes, top and bottom, with a black liquid liner and even added a heart-shaped faux beauty mark to accent the look.
Buy Now
Buy Now
Buy Now

Braided, over the ear, teased—there was no shortage of tricked-out ponytails on the fashion week runways. At Brandon Maxwell, stylist Bob Recine created an ultra-feminine low pony with plenty of shine and a deep side part. Guido Palau kept the hair over the ears at Carolina Herrera to better capture the Spanish baroque paintings that served as the collection’s inspiration. Laurent Philippon added shine to the slicked-back top hair at Prabal Gurung, but left the ponytail dry and stick-straight, creating a nice contrast under the runway lights. And at Jason Wu, Odile Gilbert switched up the look with a braided style at the middle of the head with a slight pompadour tease in the front.
Buy Now
Buy Now
Buy Now
Buy Now