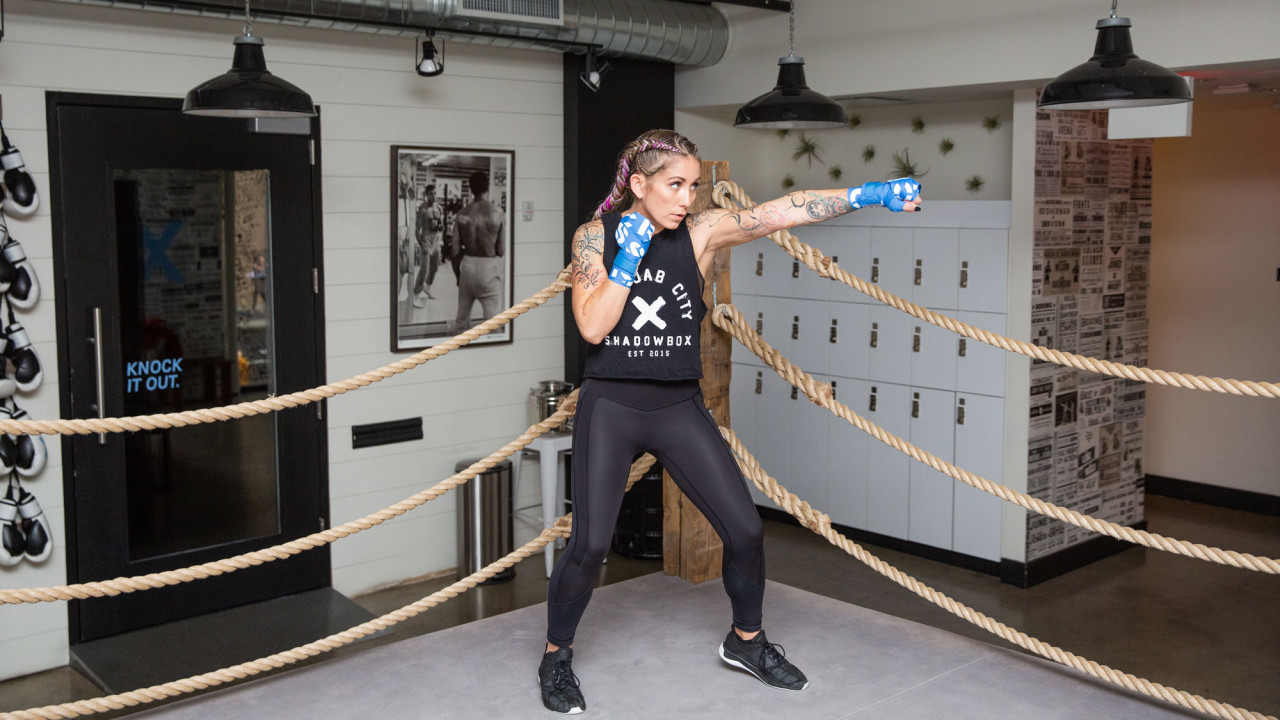 6 Boxing Moves That Will Make You Look like a Pro

Read before you get in the ring.

Not to state the obvious, but strapping on the gloves and slipping into the boxing ring can be great for more than just the body—it’s also good for the soul. There’s a reason that the Adriana Limas and Gigi Hadids of the world (and, let’s be honest, most of us hyper-stressed bods in NYC, too) have relied on boxing to reach their fitness goals—whether that be strength, speed, or just a cathartic release. But to get the most out of any workout, especially boxing, knowing the basics beforehand is essential. That’s where Shadowbox NYC’s Lindsay Coke comes in—to show us the six core boxing moves we need to know. Bonus: They can also serve as a natural stress reliever. Take notes.

“The jab is a lead straight punch thrown directly out of the non-dominant shoulder. The jab is used to measure distance, set up combinations, and for defense.

“The jab is often a snappy, fast punch. It is encouraged to stay relaxed while throwing the jab so you can focus more of your weight into your heavier punches that follow. The jab is cathartic because it’s usually a fast ‘let go’ punch, followed by harder, calculated punches.”

“The cross is a straight back punch thrown directly out of the dominant shoulder. The cross travels across the body with a back foot pivot, and with the rotation of the hips and torso, giving it even more power using whole-body engagement.

“The cross is a strong punch when thrown correctly. There is a very gratifying sensation when the back foot pivots and weight is transferred into the target. Not only is the feedback throughout the body instant when the punch is landed with accuracy, it often causes a loud popping noise when landing on your target. This sound combined with the impact sensation throughout the body allows for a major release of tension and an increased surge of excitement.”

“The hook is an inside punch thrown laterally using corresponding foot pivot and rotation of the hips/torso with a 90-degree bend in the elbow. The hook is considered a mid- to close-range power shot and can be thrown high or low (head or body).

“The hook has a beautiful spiraling quality to it. The whole body is activated and used in the rotation for power transfer and balance. When thrown properly, hooks have a true feeling of release and let go into your target. The power generated with one’s core and breath allows for whole-body engagement and tension release with the heavy impact of these power shots.”

“The uppercut is a close-range vertical power punch thrown with a 90-degree bend in the elbow. With a lower center of gravity, the uppercut is thrown up the midline of your target using leg drive, sending power upward.

“It is truly an ‘uplifting’ punch. By incorporating a deeper bend in the knees to lower one’s center of gravity, the uppercut asks the larger muscle groups of the body to engage for balance. This is a whole-body movement sparking activity in the brain, creating more functional movement and thought patterns.”

“The slip is a defensive head movement intended to get offline of the straight punches (jab & cross) from your opponent. Slipping can cause your opponent to miss their punches while in turn putting your body in balance for a counter punch.

“Using the slip in a nonstop fashion not only keeps the heart pumping, it also helps maintain your athletic agility, making it harder for your opponent to land their punches and allowing your body the ability to keep balance while transferring power into your punches.”

“The roll is a defensive movement used to avoid your opponent’s hooks by bending the knees and shifting the weight from the lead side to the back side, and vice versa (rolling in vs. rolling out).

“There is a smooth quality to a well-executed roll under. This is a beautiful defensive move that feeds directly into a counter punch, if so desired. The seamless feeling should translate through balance, core activation, and leg drive, allowing the whole body to be activated in escaping a punch and in turn generating even more power for your counter punches. The fluid motion of the roll-under has a meditative quality that serves as a reminder to stay relaxed and at ease.”