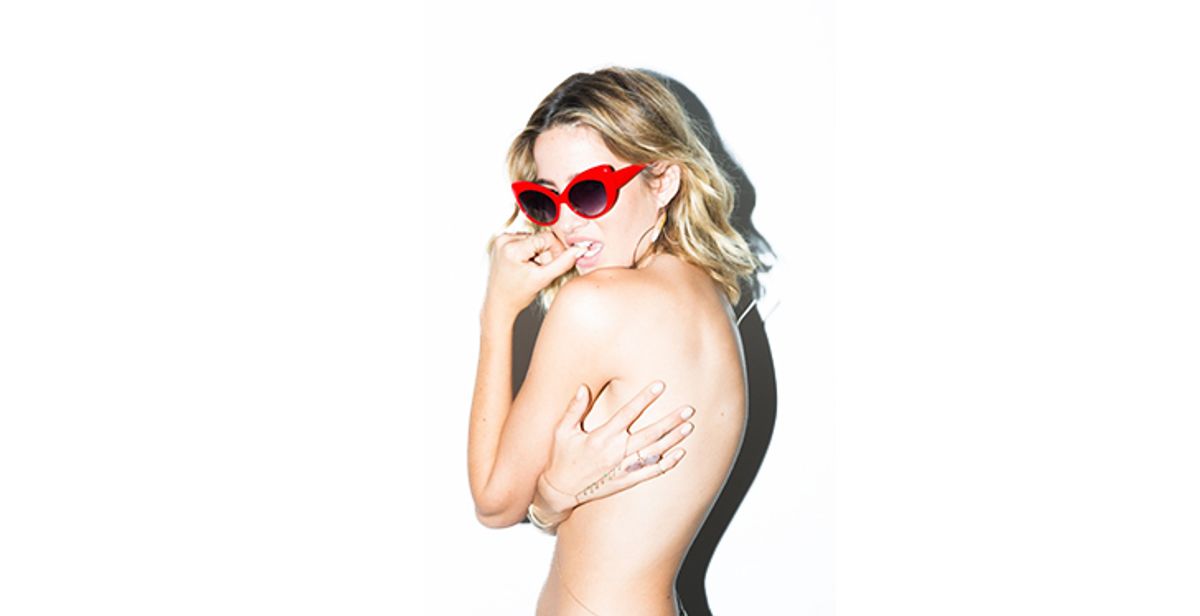 A Night at the Sex Museum

Welcome to The Coveteur’s brand new series about sex and dating, brought to you with the expertise and humor of our friend Lindsay, of the laughably addictive Tumblr, Tinder in Brooklyn. In her own very DGAF way, she’ll be breaking down the good, the bad and the downright bizarre that is, well, dating in the time of Tinder (and all that other shit we Gen X, Y and Z-ers have to deal with). Check back often, because you know there’s lots to discuss, and let us know what you think on Twitter, @thecoveteur, #TinderinBrooklyn.

One of the best things about living in New York is that I can always find something completely fucking ridiculous to do with my time—none of this small town “let’s drop ecstasy in a corn field and see what happens” business (though I’m sure that has its merits). Nope. I’m talking about the kind of absurdity that you just can’t get anywhere else.

Which brings me to last week, when I found myself jumping around inside a giant bouncy castle of BOOBS. Yup. Ginormous, squishy, inflatable tits. A whole bouncy castle of them! That, my friends, is how I justify paying New York City rent.

Recently, my friend Emily invited me to check it out with her, and let me tell you, I’m certainly glad I did. I cannot overstate the sheer majesty of my experience. It was fucking GLORIOUS.

HERE'S WHAT TO EXPECT...

As you enter the exhibit, you’ll find a giant maze. Complete with dim lighting, trick mirrors, and plenty of dead ends, it requires expert navigation skills in order to reach the end—at which point you find, drum roll, the G-spot. The metaphor underlying this piece shouldn’t be lost on anyone.

You will then find the Foreplay Derby—a carnival game in which participants race wooden penises down a track. Beyond the penis races (which my date DOMINATED,BTW), you’ll find the bouncy castle of breasts. Make sure you leave yourself enough time to wait in line for this one, darlings. When I visited there was literally a bouncer standing guard to handle the crowds. (Evidently, bouncing boobs make people rowdy.)

Last but not least, at the end of your journey you will arrive at Grope Mountain, a literal climbing-wall made of dicks. And other organs. But still,
SO. MANY. DICKS.

Clearly, the Museum of Sex is not the MET, and THANK GOD. I’ve seen enough Renoir to last a lifetime, but one thing I hadn’t seen prior to my Funland visit was a bunch of racing phalluses set to circus music. If that isn’t already an item on your bucket list, I politely suggest you tack it on there right now.

Anyhow, after spending a solid hour running through the Funland exhibit, I emerged with a few questions. The first one being: Who the hell came up with this? And more importantly, might they be accepting applications for a new best friend? I set out to investigate.

Who the hell came up with this? And more importantly, might they be accepting applications for a new best friend? I set out to investigate.

As it turns out, Funland is the brainchild of Bompas & Parr, the renowned conceptual artist duo based in London. Meet Sam Bompas. Sam is one half of this visionary team, and he might also be my spirit animal. I was lucky enough to get him on the phone, and while I never found the guts to ask him about an available BFF position, I did have the chance to ask him about a few other things...

Lindsay A.: Thank you so much for speaking with me, Sam, I really appreciate it.

Sam Bompas: Of course! You know, I was actually warned about you!

LA: Seriously? That is a perfect start to the interview.

SB: [laughs] The Museum of Sex people mentioned we might hear from you… and they told me a bit of what to expect. Some… cheekiness?

LA: That’s amazing. Yes, I do like to keep things… I’d say casual, but cheeky works, too. People try to make everything sex-related so serious, which I think is silly.

SB: Brilliant. That’s perfect. Actually, that’s sort of what our whole exhibit is about at the end of and the day. We wanted to bring a lightness to sexuality—it’s more flirty than overtly sexual. There is a sense of play that is so important.

LA: Well, you definitely achieve that. I haven’t had that much fun in a museum, well, ever, actually. So how did Bompas & Parr get involved with the Museum of Sex?

SB: We were actually first working with the Museum on a series of cocktails that were served in the Museum Bar. [Sidenote: Yes, the Museum of Sex has both an in-house bar AND sex shop. I told you this place was awesome.]  Our big idea was a ‘grape foot cocktail’—you would first receive this sort of footbath with unguents and oils, and then you would proceed to crush your own grapes with your feet. The barmaid would then make the cocktail using that grape juice.

LA: That is outrageous! I want one!

SB: It was great fun… it really played on taboo. Anyhow while we were working with the museum on that, we asked them, you know, had they ever considered a breast bouncy castle? I did some research, and it appears no one had ever actually made one, which is strange because the concept seemed almost obvious!

LA: It’s like the fantasy sequence of every teen sex comedy. There should be more of these.

SB: One in London would be great. It’s such fun.

LA: I do think you should tell people to come wearing a sports bra though—that is probably the only thing that could have enhanced my experience.

SB: [laughs] So you were jumping with enthusiasm!

LA: You have no idea. Okay, so from the bouncy castle you expanded to the rest of the fairground?

SB: Well, once we got the go ahead for the bouncy castle, we knew we wanted to create a larger experience. But obviously, we also knew had to bring some more academic rigour to the concept. So we brought in Vanessa Toulmin, who is the director of the National Fairground Archive to work with us. We began sorting through these huge archives, gathering footage. Some of that footage you’ll see inside the exhibit had never seen the light of day before we got our hands on it, actually.

LA: Seriously. So tell me about how you incorporated the sex element to the carnival setting. Or was it there to begin with?

SB: There is something very titillating and flirtatious about the fairground because it has this whole element of plausible deniability. When you get in a carnival ride, there is this potential for physical contact with complete strangers, and there is a lot of excitement in that. Imagine you are on a roller coaster, perhaps with a date, and as the ride moves you’re jostled around in your seat—you brush up against the other person, your hand grazes theirs. That was the flirtatiousness we wanted to capture.

LA: You know, I’ve actually been on several carnival dates, and I always thought of it as so innocent.

SB: It’s amazing, isn’t it? This notion of propriety, even in a sex museum, is so ingrained. To play with that, we wanted to allow interaction as well as release. The bouncy castle, for example, gives people permission to laugh and scream, and they do! Because they know that’s sort of expected behaviour in a bouncy castle.  And when you put that castle in a museum, it’s challenging.

LA: That’s so interesting. You know, there were three women who went in the castle after me… and they were positively screeching. It’s like you gave them permission to react to everything they’d seen at the museum.

SB: Oh absolutely. It gives you a way to let off that built up sexual charge. And you get to do it in a way that you’re still quite innocent and joyful. You can let off that energy in a way that’s not creepy. I mean, the whole thing is obviously a taaaad creepy, because of what fairgrounds are like.

LA: “Fun and a tad creepy”, I like that! I want that on my business card. It basically describes my personality.

Let’s talk about Grope Mountain—the climbing wall of sex organs. Is the idea behind that just to get everyone’s hands all over naughty bits? I know I certainly grabbed a lot of dick that afternoon…

SB: Surely a few breasts, too? There are a few different things going on there. Actual climbing is really about the gaze. When you are doing the act yourself, you don’t realize people are looking at you. So it is voyeurism, but it’s also quite harmless, because as you are observing the climbers, you could ostensibly be planning your route. It’s harmless observation…

LA: I didn’t even think about that while I was climbing! I was more, like, furious at myself for wearing heels. I didn’t get very far.

SB: Oh my, that sounds very glamorous! Scaling a climbing wall in heels!

LA: Oh no… no, no, no.  Not at all.  I basically just looked like an awkward idiot. I was having a blast, though! Story of my life…

Tell me about the racing cocks derby.

SB: The point of the Foreplay Derby—the cock race—is, again, designed first of all to mimic the actual games that one would find at a carnival. But it is also there to really break down the barriers at the museum. The game has five player spots, which allows for interaction with total strangers. And it creates a talking point: “I won, you won.” You can start up a conversation. So that really breaks down the formality of the museum.

LA: It’s probably one of the better conversation starters out there, to be honest. I mean, PENIS RACES… top that.

SB: Exactly. We make it so easy!

LA: You know, now that I think about it, I actually have a few friends who should, I don’t know, bring their mother-in-laws here… to facilitate some bonding. Maybe I’ll bring the Dean of my law school to this one, since we have some issues to unpack.

SB: Yes! The cocks could clear the air!!

LA: [laughs] Did you consider racing anything else?  Racing breasts, racing vaginas…?

SB: Right. He actually struggled because we wanted the cocks to have a rustic finish to fit with the theme. And obviously he normally does a very smooth finish for utility reasons.

LA: I just… cannot… even… imagine.

SB: But the focus of this piece is really the potential for interaction with strangers. The thing that I absolutely love is getting other people to connect with other human beings. Because, you know, most people are flippin’ awesome.

LA: You have no idea how much I agree with that. People are fun as shit.

SB: You just need to give people to the excuse to be the best they can be. And sometimes that excuse is racing cocks.

The Funland exhibit by is currently on at the Museum of Sex and will be running until the end of May.

Get in there, bitches.

This interview has been condensed and edited