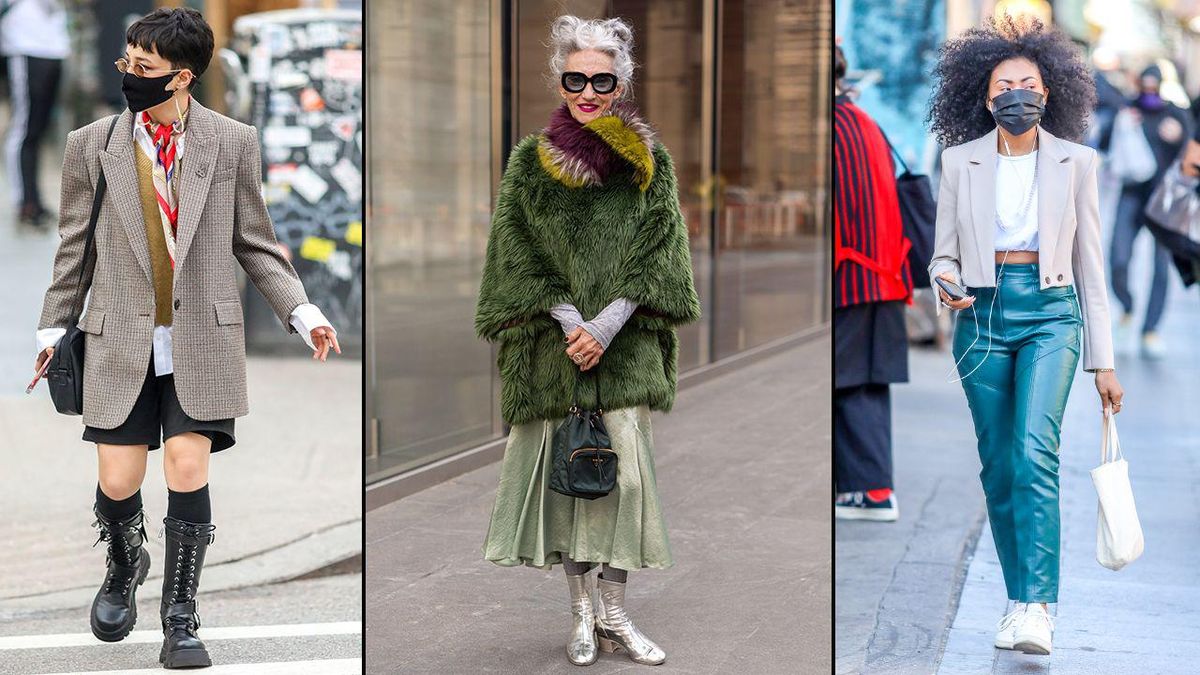 In the absence of fashion week, we re-evaluate the point of a street-style image.

Amidst the pandemic-induced darkness that has gripped this country since early 2020 and even before, hope was an elusive commodity. A byproduct of days that turned into weeks that turned into months spent locked in our homes, many lost touch with any sense of prior normalcy, especially in terms of style. Fashion imagery mostly ignored the predicament, favoring an escapist approach instead. Masks were largely absent at fashion week and uncommon sightings among the pages of magazines. In the wake of depictions of this sartorial disconnect floated imagery of ensembles with the same fashion-induced joy that were refreshingly rooted in reality. These were mask-clad New Yorkers strutting the streets in their best looks, doing so in a way that respected the dangers of this pandemic but alluded to the optimism many were so desperate for.

These street-style photos surfaced via Instagram and provided a glimpse of the sartorial joy still very present on the streets of New York. On these accounts, you'll find snaps of all types of city dwellers dressed in anything and everything—the weird, the minimal, the understated, the wacky. Some are hastily en route (New York–style), some laughing with friends, some striking a pose, but all served as proof that, yes, people were still "getting dressed."

Photographer Johnny Cirillo began his street style account @watchingnewyork roughly six years ago in tribute to the legendary Bill Cunningham. In homage to his work, in his "On the Street" approach, Cirillo documents larger movements in what people are wearing. "If it's happening more than once on the street, usually it continues happening and it just starts becoming a trend," muses Cirillo. Though unintentional, his work served as a sort of historical depiction of this pandemic through the lens of fashion.

They had this anonymity because they had their mask on."

In addition to acknowledging the presence of masks, his page tracked their evolution. "They started off as surgical masks, and then they got creative and fringe-y and fun," Cirillo reports. The mask also apparently bolstered more flamboyant wardrobe choices. In the summer of 2019, sheer clothing was popular, often in the form of see-through tops purposefully worn over bras. In July of 2020, Cirillo filled a folder with images of similar styles yet no bra underneath. "They had this anonymity because they had their mask on. I don't know if it gave them more confidence or that extra hidden factor of 'if I'm covering my face, I can kind of expose a little bit more of myself,'" he explains. "I don't think it would have happened had it not been for the masks."

Liisa Jokinen of @nyclooks has always found the personal style of everyday people similarly intriguing. Inspired by Japanese magazine Fruits, she began shooting street fashion in her native Helsinki and continued to do so as her husband's job led them to San Francisco and then New York. "It was the best way to get to know the cities and their people," she notes.

Unlike Cirillo, who captures people as an outside documentarian, Jokinen stops her subjects to uncover a little backstory. For instance, one post depicts Hee Eun Chung, 21, in a printed sweater vest over a fitted turtleneck and a bright green pair of leather pants, complete with a yellow head scarf, emerald boots, and a silver mask. Of her ensemble, Chung reports, "I'm wearing all thrifted clothes from Depop, Greenpoint Flea Market, and from a burlesque's closet. My style is currently inspired by cottage-core and spy movie themes."

Jokinen regularly traverses the city in hopes of stumbling on an ensemble that intrigues her. One week she might be in Chelsea, followed by the Bronx, then perhaps a stint in Williamsburg. "I usually always take the camera with me when I leave the house because you never know when you are going to spot someone," she says, "and I think the more surprising the encounter is, the more fun it is."

When shooting a person for their style instead of their Instagram following, you naturally get a more diverse representation of people. And if you don't, the followers are there to keep you in check. As Cirillo predominantly shoots in Greenpoint for convenience since the birth of his son, he is by default working with a broad range of ethnicities, ages, body types, even heights. Though whenever the photographer finds himself lost in the pursuit of the perfect 'fit and forgets to account for the diversity on his page, he is called out for it. "I get messages constantly," admits Cirillo. "You'd be shocked." His followers want to see fashion worn by anyone and everyone. They want to see themselves.

I usually always take the camera with me when I leave the house because you never know when you are going to spot someone, and I think the more surprising the encounter is, the more fun it is."

On the wave of the 2010s' street-style boom which Schuman spearheaded, magazines who wanted a piece of the action would forgo the hunt and send a photographer to fashion week instead. Shooting the parade of fashionably dressed people is more akin to fish in a barrel versus the wild-goose chase of the open streets. The prize was no longer in a well-edited handful of images Schuman has always championed, but in capturing enough photos to anchor a click-through gallery online.

Not to mention the fact that most people who score one of the more exclusive fashion week invites are dressed in a look straight off said designer's current runway. The magic of street style is in the varied styling of an ensemble, layering different designers, eras, colors, and silhouettes together. All of which is negated by full-look policies, where a wearer is beholden to don one designer in entirety.

In this year's absence of fashion week and similar events, it seems people have turned their attention to street-style photography similar in essence to its origin. And when you photograph real people, you get real clothes. "What you get from people on the street is inspiration," muses Schuman. "People thinking, 'Oh, I've got a t-shirt like that. I've got a jacket like that. How do I remix it and do something interesting?' I think that's still what people will always like."

"To a certain extent, I'm sure that [fashion-week street style] will continue to happen, and that's fine. The audience that likes that will still look at it," Schuman reflects. "But people are looking for something different, a little more real, a little bit more surprising. I think that's maybe why we're seeing a new boom of more people shooting street stuff—because it's just more surprising."

This pandemic cemented a distaste for perfection. Fashion lensed through the unattainable and the exclusive fell flat where democratic accounts that captured how real people got dressed in the midst of a pandemic resonated. "I think there is a place for street fashion because it's relatable," says Cirillo. "I've shot runways before, and I enjoy them and they're fun, but it's kind of unattainable in a lot of ways."

The irony is that this debate doesn't seem to greatly concern any of the aforementioned photographers. Each started these accounts and blogs as side passion projects with no plans for expansion and plan to continue regardless.

"I mean, the bottom line is I do it because I'm enjoying it and I want to continue enjoying it," states Cirillo. "This is the most enjoyable way for me to do it right now."