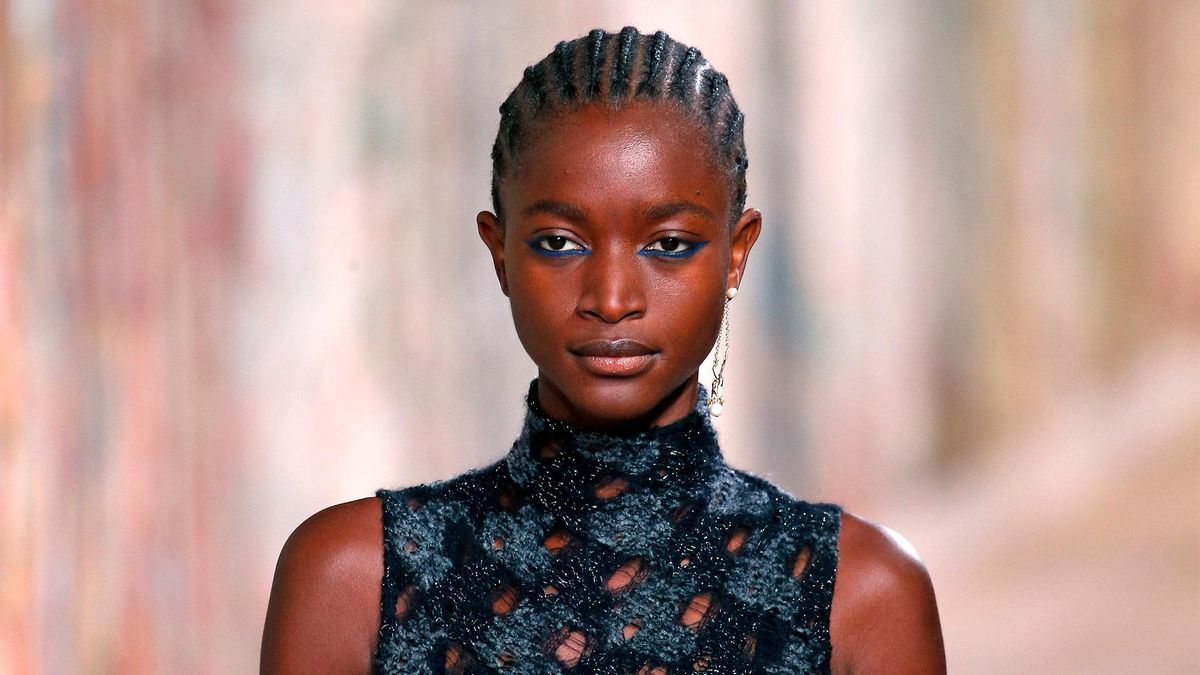 In regards to the makeup direction for Dior's latest haute couture show, one of the first directions that creative director Maria Grazia Chiuri gave Peter Philips, the creative and image director of Christian Dior makeup, was that she wanted a blue eyeliner or a blue smoky eye.

The deep royal blue that came down the runway on Monday, July 4th, at the Rodin Museum in Paris was similar in hue to ultramarine. Created around 6,000 years ago, it's a shade of blue that's born from a rare gemstone—lapis lazuli. Ultramarine was an elusive pigment, transforming it into a prized possession as treasured as gold: the Egyptians powdered it into an eyeshadow for their queen, Cleopatra. It was also seen as transcendent. German Romantics used the blue flower as a symbol of yearning for the unattainable. In a 2012 New York Times piece, Dr. Berke, a chemist, stated, "Early mankind had no access to blue, because blue is not what you call an earth color. You don't find it in the soil." French artist Yves Klein believed that ultramarine was the best blue of them all, stating, "[B]lue has no dimensions. It is beyond dimensions." In other words, it was otherworldly, with the metaphysical power of transporting the viewer beyond the realms of their world. Depending on how much eyeshadow was packed onto the model's eye and the angle at which your gaze hit the look, the blue may also appear to be Marian blue, the official color of the Virgin Mary.

In Wassily Kandinsky's "Concerning the Spiritual in Art," he declares that intense blues are "heavenly" colors:

The deeper the blue becomes, the more strongly it calls man towards the infinite, awakening in him a desire for the pure and, finally, for the supernatural … Blue is the typical heavenly color. Blue unfolds in its lowest depths the element of tranquility. As it deepens towards black, it assumes overtones of a superhuman sorrow.

Set against a 350-square-meter embroidered tapestry backdrop designed by the French artist Eva Jospin, Chiuri's designs were ethereal. Yes, there was a lot of tweed, but pieces like the lightweight, body-clinging chiffon gowns and mid-length skirts embellished with gradient-hued feathers were celestial—unearthly in nature. They may have a difficult time finding life off the runway, but isn't that the point of haute couture? To call on the sartorial gods and create dreamlike pieces that are unattainable for most of us watching.

When creating the bold blue eye makeup look, Philips lined the eye with Dior Diorshow 24 Stylo Waterproof Eyeliner in Matte Black before using a flat brush to pack 5 Couleurs Couture Eyeshadow Palette in Denim on top. "It creates a nice deep blue," says Philips. "You get this intense blue with a bit of luminosity to it." The eyeshadow made sure that the look wasn't too graphic or too harsh: "We made sure that the edges of the eyeliner were soft, so it created a more elongated look," says Philips. "It was all about striking the right balance," he adds. What Chiuri wanted was an eyeliner look that sat between two realms; one that was a bit punk while still evoking elegance.

In A Field Guide to Getting Lost, Rebecca Solnit refers to blue as a hue that exists at the intersection of distance and desire. "The blue of distance comes with time, with the discovery of melancholy, of loss, the texture of longing, of the complexity of the terrain we traverse, and with the years of travel," Solnit writes. The words fall right in line with Chiuri's vision for the season—this was the first in-person show after three virtual presentations due to COVID-19, and as an eyewitness to the economic havoc that the pandemic wreaked on workers in the garment industry, she wanted to create an experience that depicted the connections we all share. "It's a metaphorical thing, to say that we're all connected," she said backstage.

Solnit later goes on to write, "If sorrow and beauty are all tied up together, then perhaps maturity brings with it not … abstraction, but an aesthetic sense that partially redeems the losses time brings and finds beauty in the faraway." Whether it's building an eye look that's worthy of an in-person dinner with friends you haven't seen in a while, or designing pleated gowns that embody the fantastical nature of haute couture, the clothing and the makeup of this Dior show offers a glimpse to the future, where the possibility of any experience resides.