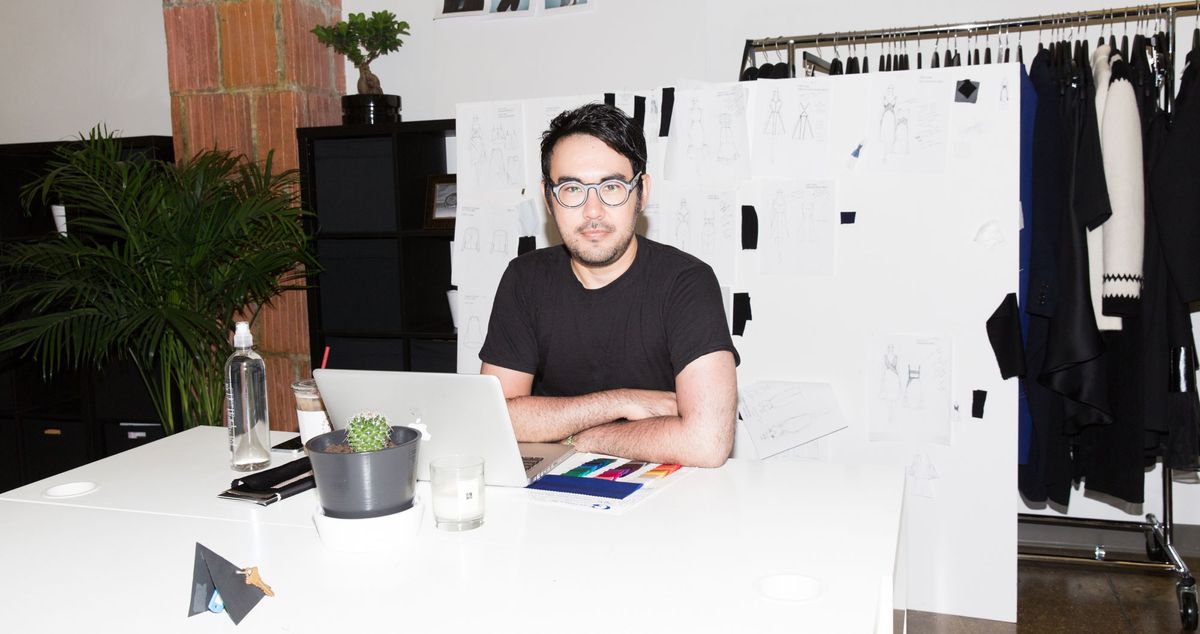 How Charles Youssef is Building a Fashion Line with Staying-Power

And What it’s Like Being ‘The One to Watch’ in Fashion.

In the endless stream of ‘ones to watch,’ and ‘next big things,’ there’s one crucial litmus test for the validity of that claim. Do you want to wear it? If the answer is ‘yes,’ and said designer is part of the CFDA Incubator program, they’re probably a safe bet. Both are true for Charles Youssef.

Youssef designs exactly the kind of dresses we want to wear for special nights out. Feminine, but not girly, smart, but not boring, and edgy, but nothing that looks like we could have bought it at Hot Topic circa 1999. With stints at Calvin Klein, Ralph Lauren, and Gareth Pugh under his belt, Youssef (and his obsession with triangles, and his Sphynx cat Mr. Fussie (omg)) is in it for the long-haul. We sat down with the unbelievably nice and humble designer in his new digs at the CFDA Incubator in Midtown Manhattan to hear all about how to build a smart business plan, what it was like dressing Lady Gaga, and the benefits of spending someone else’s $$$.

“I don’t really know! My assistant, Josh, pointed it out and was like, ‘you are obsessed with triangles,’ because we were sewing triangles! It was like someone telling me I had been an alcoholic for ten years. I didn’t know, but he showed me, we went to all of my work, back to Saint Martin to my Masters, and everything was geometric and triangular. It was just this thing I loved that I wasn’t really aware of. I feel like it’s the edgiest shape. If you look at a square, triangle and circle, the triangle is pretty edgy. That’s really the only reason. There’s a lot of symbolic meaning I could make up about a triangle, but that is not really what I was actually thinking about!”

“I got an email from Nicola Formichetti, who was her stylist at the time. It was just from this Hotmail email address and it said “Lady Gaga wants to wear your clothes” as the subject. I came so close to deleting it because I thought it was spam, but it ended up being real!”

Being part of the CFDA Incubator:

“Joining the Incubator exposed us to a lot of people who we would want to meet, but would never really have had the connection to—a lot of industry experts in areas like production, marketing and brand development, financing, people who we wouldn’t be able to connect with otherwise… a lot of them have real insights into the industry and know how to make a successful business. [The CFDA] brought us onto help us accelerate our growth, so that’s been really helpful.”

On having a solid business plan:

“I started out working at Calvin Klein where I learned how to write a business plan. I spent a year writing a really in-depth business plan, stuff like insurance and certain laws that I didn’t know. I wanted to know everything, because I knew if I messed up one thing, then my business (which is my identity) would fall apart. I showed it to a business consultant who ended up joining me as my business partner and making the initial investment that launched our business. Had I not had her, there were so many moments along the way where things could’ve gone wrong. Things like negotiations with contracts, just the language in contracts, and the way things are structured has so many implications for the next decade and I wouldn’t have picked it up if it wasn’t for her. Within the Incubator, all the business mentors here have that kind of knowledge that’s specific to this industry. They really guide us in how to have a business that can last for a long time. I think it’s really critical.”

The importance of getting experience with other designers:

“I think it’s super important. I’ve made a lot of mistakes on someone else’s dime, I hate to say that! It taught me a lot about factoring in production, pricing and business that I would not have learned on my own without it being super costly. So things like, knowing that when a fabric that is a little too fuzzy or something, we can return it. Had I not done that, I would have lost thousands and thousands of dollars. Every error has a financial number attached to it and all of those things I learned at Ralph Lauren, Calvin Klein, and with Gareth Pugh, I was able to make mistakes and learn and not necessarily hurt financially. That was a great learning experience.”

On keeping your eye on the prize:

“Instead of doing crazy editorial things and having a creative, fun project, I launched with the idea of a business that would actually sell. So we approached Barney’s at the very beginning with sketches before we had samples. I spoke to Tomoko [Ogura, former fashion director at Barney’s] and got their feedback about what they were looking for, and launched with them in mind. We had a show in fashion week that they attended and then they purchased the line that first season. I did my Masters at Central Saint Martins, and having classmates who would launch these amazing collections that were very editorial, get a lot of press and would be like, ‘the next designer to watch,’ and then would go bankrupt within three seasons. It was a very important strategy, that has made us last as long as we have. Focusing on the business knowing that our key items are cocktail dresses that sell and sustain us, and making sure we have that business every season in a consistent way.”

The biggest moments of his career:

“Getting into the CFDA Incubator was really cool. In the August print issue of Elle, [there’s a feature and] when you turn and my face is *this* big was not something I thought would ever happen! I thought it would be a model wearing my clothes! Seeing my two rails at Barney’s with my name on the wall was very exciting. That’s every designer’s dream come true. The Vogue.com article with “these are the next American designers to watch,” with a picture of my face was pretty cool. Those are all really exciting because they’re checkmarks on a bucket list every designer wants to have. Be in Vogue, be in Barney’s. Those were really amazing.”

What happens when a mega-mega-celebrity wears your clothes:

“[The Lady Gaga thing] was part of my masters collection at CSM. We showed in London Fashion Week, and I got an email from Nicola Formichetti, who was her stylist at the time. It was just from this Hotmail email address and it said “Lady Gaga wants to wear your clothes” as the subject. I came so close to deleting it because I thought it was spam, but it ended up being real! I never met her, he came by my apartment and pulled a few pieces from my graduate collection, and she wore it for her Tokyo tour and off the plane with her Birkin that was written all over. There was a lot of press that happened. He returned the clothes and I got an email from him about a month afterwards saying that she wanted to buy the collection. She really loved the clothes! She bought everything, except for one look which I still have in my closet at home.

“[That ] made me realize that I could actually have my own point of view and business to share with the world. Not just working under another designer’s direction. It made me feel like it was achievable and gave me a lot of confidence. It was interesting because what also happened was I became surrounded by “fashion friends” who weren’t necessarily real friends. They’d be like, ‘Oh I love you!’ and I remember when I had a difficult time in London how they just disappeared. It gave me exposure to what that was like and really being able to identify who was going to be there for like, as a friend or partner in the long run.”

“Instead of doing crazy editorial things and having a creative, fun project, I launched with the idea of a business that would actually sell.”

The need to build strong relationships:

“I think relationships are everything—that’s often the difference between success and getting lost in the crowd. I love Kate Foley, I think she’s super special and has a really unique way of dressing. We met my second season in business at a fashion week party. I just showed her a few pictures of my line and asked her if she wanted to style it and get her opinion. She was really gung-ho about it so we’ve been working together for about two years. As a male designer designing for women, having a ‘cool girl that I can bounce ideas off of like, ‘listen, this makes sense to me from an editorial perspective, but would you ever wear this massive triangle sleeve? Is this a fabric you like, or is this just me thinking it’s what women would like?’ Having that dialogue is really important, especially as a guy.”