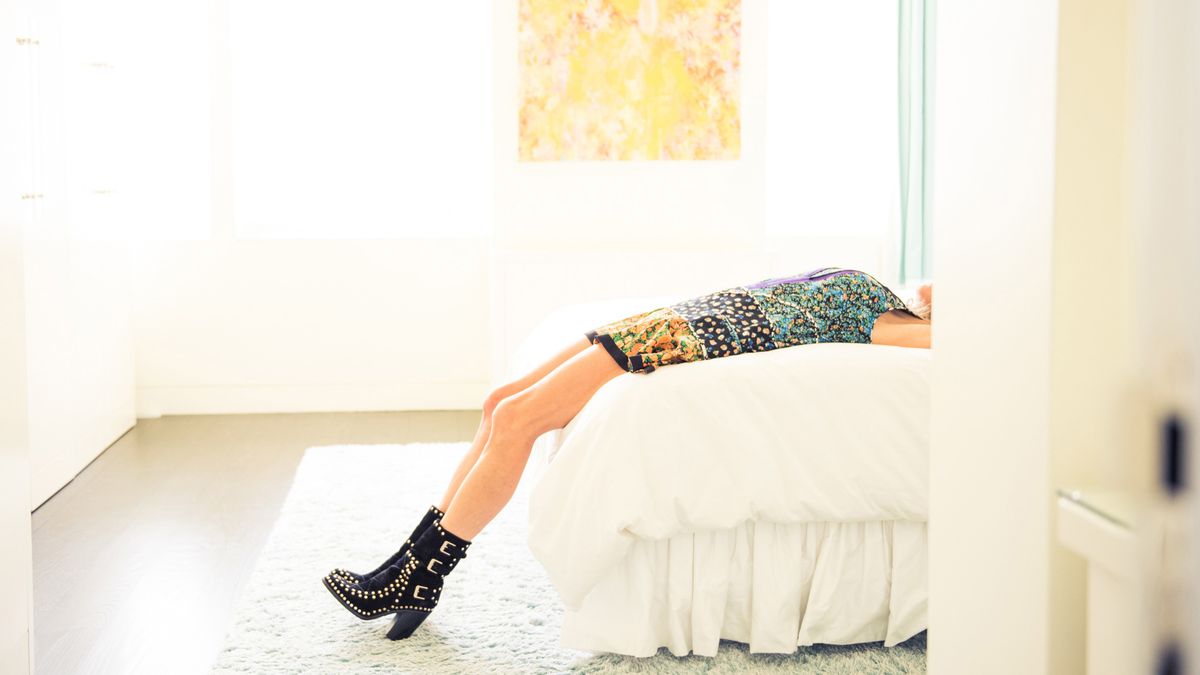 Cazzie David on the New "Workout" for Lazy People

Let us tell you, it’s hard to keep up with the latest, newest, weirdest trends purporting to ~change our lives~ in some way or another. And when we heard about Hollywood’s latest wellness obsession, Shape House, which promises to help you sweat the weight away without so much as standing up, we asked L.A. native (and daughter of Larry David) Cazzie David to investigate. To be honest, after reading the below, we’re even more curious to try it ourselves.

Shape House is the trendy new workout for lazy celebrities. And while I’m not a celebrity, I’m definitely lazy, so it piqued my interest. This place is the crème de la crème of lazy workouts. Pilates people and water aerobic-ers take note, because it doesn’t get any lazier than skipping the entire workout and going straight to the sweat part. Yes, it’s cheating, but I grew up cheating at Uno all the time, no big deal.

At this “urban sweat lodge,” you get all the great results of working out without ever having to even stand up. It claims to eliminate toxins from the body (I have toxins), helps you sleep (I can’t sleep), clears your skin (I hate my skin), and relieves anxiety (riddled with that). Anything that can do all of that with zero effort from me, I’m willing to try—at least to know if it actually works.

I was a little nervous in the car driving over, similar to the type of anticipation you feel before every wax appointment—because no matter how many times you’ve done it before, your body senses something weird and unnatural is about to happen to it.

I arrived at Shape House’s Santa Monica location, a tiny blue storybook cottage at Broadway and Tenth—The Brothers Grimm meets California cool. Once inside, it was made blatantly obvious by the overwhelming scent of incense and the forced whisper in which everyone spoke that sitting in a pool of your own sweat is supposed to be a relaxing experience. This, I am not buying. I’m also feeling a little annoyed that current “health” trends for women involve lying in a heated sleeping bag and excreting our body weight in sweat, while current trends for men are things like wearing sweatpants in public and having beards (two things women can only dream about).

Full disclosure: I hate sweat. You know how people HATE the word “moist”? If you say the word “moist” aloud, guaranteed at least three girls will shriek and tell you how much they hate that word. That’s how I feel about the word “sweat.” My hatred for it began my senior year of high school, when my entire grade went on a trip to Ojai and was forced to bond through the hell of a communal sweat lodge (the very inspiration behind Shape House). If being trapped in a room with fifteen sweaty people doesn’t already sound bad to you, imagine they are also exchanging shameful family secrets and crying actual tears, adding to the already large volume of teenaged salty water. Meanwhile, the Sweat Shaman in charge continues to relentlessly chant the word “sweat,” as if we had any physical control over the liquids pouring out of our bodies. I’m so turned off by sweating now, I usually “take five” when I get close to breaking one during a workout. Unfortunately, there are no “take fives” when you’re doing nothing but sweating.

I was asked to fill out a waiver, because you can definitely die here. There are no waivers at places you can’t die at. So I signed my life away and, in return for my heroism, was handed a set of clothes to sweat in. A pair of sweatpants, socks, and a long-sleeved shirt, all in an alarming shade of orange that naturally led me to a prison comparison.

I changed and was escorted to my “sweat bed.” (I heard Selena Gomez bought one for her house. It really doesn’t get lazier than putting the world’s laziest workout feet away from your bedroom.)

My sweat bed attendant (henceforth referred to as my “SBA”) lifted up the heavy silver blanket on the sweat bed and gestured that it was time to get underneath it. Employing the power of my new orange uniform, I summoned the strength to commit to the sweat bed, in much the same way the woman in the Equinox ads commits to breastfeeding her twins. My SBA tucked me in like a little burrito. I haven’t been tucked in since I was a baby, so this was very pleasant. I decided to start asking my roommate to tuck me in at night. Already, this was paying off.

The only parts of my body exposed from the sleeping bag hug were my head and my right hand to control the TV remote. Yes, you get to watch TV while you sweat! #blessed. The beds are only separated by curtains, so people walking by can see what you watch during your sweat sesh. With this in mind, I tried to pick something cool—not the embarrassing garbage I’d normally watch. I turned on the OJ Simpson documentary, which would definitely make any passing SBAs think, “This is an educated sweater we’ve got right here.”

I was about five minutes in before the combination of the intensely heated bed and the intensity of the documentary hit me. How could I watch the story of two people being brutally murdered while I relaxed in a heated sweat bed? It wasn’t right. I went straight to Netflix and put on Gossip Girl, the only show opulent enough to keep me from feeling like a total asshole. SBAs be damned.

Twenty minutes in, I was most definitely sweating, and I was at a point where the entire concept of the sweat bed started to freak me out: I’m sitting in a burning hot bag and turning into liquid. I’m basically purposely melting myself. This can’t be healthy. What if the heated blanket is giving off cancerous radiation? I spent the next five minutes debating whether this was a valid reason to extricate myself from the bag, since I really wanted to get out and stop sweating.

Fortunately, thirty minutes into “Netflix and Sweat,” my SBA came back to check on me. She gave me a thumbs-up, and I, never wanting to disappoint, gave her a weak thumbs-up back, implying “I’m all good,” and by “all good” I mean not dying. Before she left, I asked with some trepidation how the blanket is heated. I’m told they use FAR infrared energy, not ultraviolet UV light, so it’s totally healthy, and I’m safe from worrisome radiation. Fine, I guess I’ll just stay in the bag, then!

That’s when I began a mind game that evolved into one of the more extreme competitions I’ve ever been in. A bet with myself, against myself, about how long I could stay in the bag. All I wanted in that moment was to stick out a leg, or even a toe, but if I did I would lose the game. And I hate losing—that’s why I cheated at Uno.

I couldn’t help but wonder (how would Carrie Bradshaw like Shape House?), if no one was forcing me to stay in the bag, did I actually like being in the bag? Or was I a masochist and this was a new fun form of torturing myself? Once I answered these questions (Carrie Bradshaw wouldn’t last five minutes/I actually liked being in the bag/I am a masochist), I spent the remaining time calculating how much time was left by the number of Blair’s outfit changes. She’s worn four different headbands, I must only have fifteen minutes left. Look, another headband! That’s at least another minute gone. That’s less than five minutes three times. Rufus, you’re so annoying, it’s insane.

My SBA came in once more to put a cold lavender-scented washcloth on my forehead, giving me the boost I needed to remain in the bag for the full fifty minutes and win the game against myself. My heartbeat suddenly sped up, and it felt like I’d actually done cardio. Cheating prevails!

Ten hot minutes later, my time was up and, surprisingly enough, I actually wanted to stay in the bag longer. What if I didn’t sweat enough? Could I have sweat more than this? It might just be my contrarian tendency to want to stay only once I’m told to leave. Or maybe it was the fact that I would no longer be a tucked-in baby and would have to re-enter the world.

My sweat-drenched body was led into the relaxation room, where I was offered orange slices and tea, which sounded nice, but I declined because I feel like a nuisance having someone go get me something anywhere that isn’t a restaurant. I sat in my sweat, cooled down, and mentally prepared myself to go back into the city. I had the same delightful dizziness that comes right after a massage, except more relaxing, because no one touched my body. I left feeling 100%, as opposed to my constant 68%.

Another small miracle occured later at dinner, when I only craved salad, rather than my usual desire to binge pasta. I chalk it up to the health grind Shape House gently forces your body into by ridding it of toxins. Unfortunately for me, this craving only lasted until 10 PM, when my late-night hunger kicked in and I impulsively ate four chocolate chip cookies. I could have potentially had a great night’s sleep, like Shape House promised, but now I’ll never know.

However, the next day my complexion looked clearer than usual. Again, it’s possible it wasn’t the sweating, but the insane amount of water I drank before my appointment out of fear of dehydration. Either way, I was glowing. I asked everyone I saw that day if they noticed the difference in my skin. They couldn’t. At all. But there was definitely a difference.

I probably need a few more sessions to learn how to relax during the appointment, not just after. But most importantly, Shape House might have made me actually want to sweat. Ew. I just have to get used to the word still.