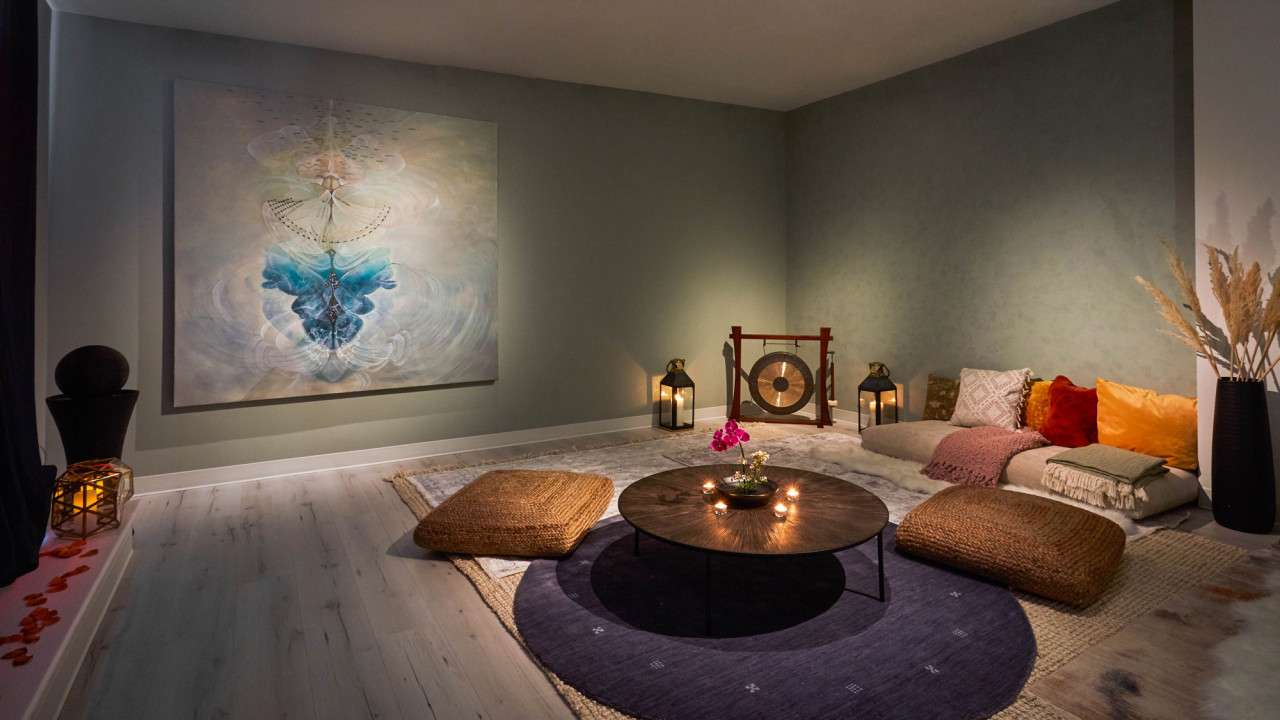 We investigate the aesthetically minded rebranding of psychedelics.

Not so long ago (if you can believe it), yoga was unknown to most Americans—but you don’t have to be a close follower of all things wellness to know just how mainstream it’s become for everything from your physical to mental health. According to some experts, psychedelics are next.

As we step into month eight of a global pandemic that has drastically constricted our social lives into shells of what they once were, the need for adequate mental health care and self-care is stronger than ever—and the thriving wellness industry, and its many alternative treatments, are proof of this collective need.

At Field Trip, a new ketamine-assisted psychotherapy clinic in Manhattan, the future is already here—and it looks...beautiful. On the top floor of the new Kips Bay outpost (the company is originally from Toronto) lies a proverbial oasis, designed to provide the optimal setting for deep introspection—the kind brought about by carefully administered psychedelics.

It’s a rapidly growing field that experts believe holds a great deal of promise for mental health patients. In fact, in 2014 Dr. Tom Insel, director of the National Institute of Mental Health, called ketamine potentially the “most important breakthrough in antidepressant treatment in decades.” Needless to say, it’s a space worth watching, especially since humans have been experimenting with mood-enhancing drugs like LSD, psilocybin, mescaline, and peyote for centuries, for various spiritual, religious, and medical reasons. 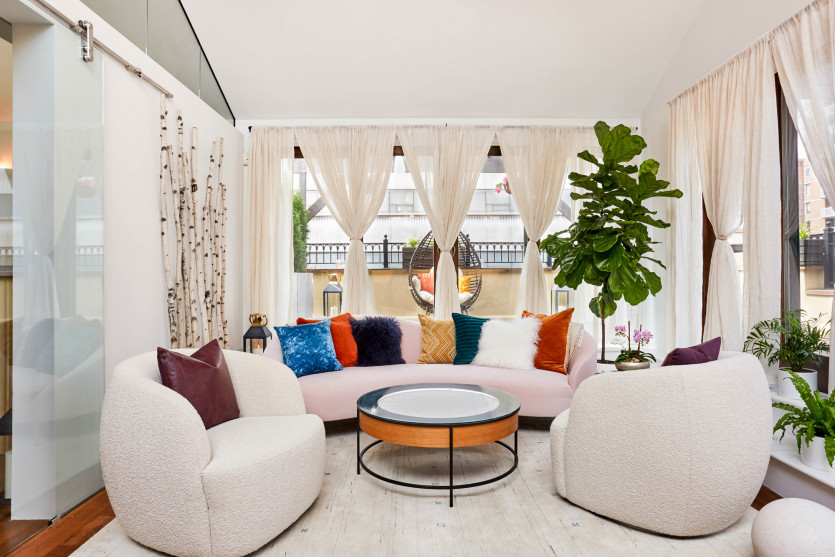 Ketamine, an anesthetic drug, was discovered in 1962 and approved for clinical use as an anesthetic in the US in 1970, and it can be used off-label as an antidepressant. “It has unique dissociative psychedelic effects,” says Dr. Ryan Yermus, chief clinical officer at Field Trip. Recreationally, it acts as a stimulant and induces mild hallucinations, and is often referred to as Special K.

In recent years it has gained traction as a promising treatment for depression, particularly treatment-resistant depression, which is categorized by the Mayo Clinic as depression for which “taking an antidepressant or going to psychological counseling (psychotherapy)...aren’t enough.”

Says Ronan Levy, Field Trip co-founder and executive chairman, “In 2000, the first randomized, double-blinded study was published in Biological Psychiatry. In this study, Dr. Berman et al. reported the antidepressant effects of ketamine in patients suffering from depression. And in 2012, researchers called ketamine ‘the biggest breakthrough in depression research in a half century.’”

In 2019 the FDA approved an esketamine nasal spray called Spravato (which is chemically similar to ketamine) for patients who have treatment-resistant depression—a sign that ketamine is slowly being embraced by the medical community and beyond. 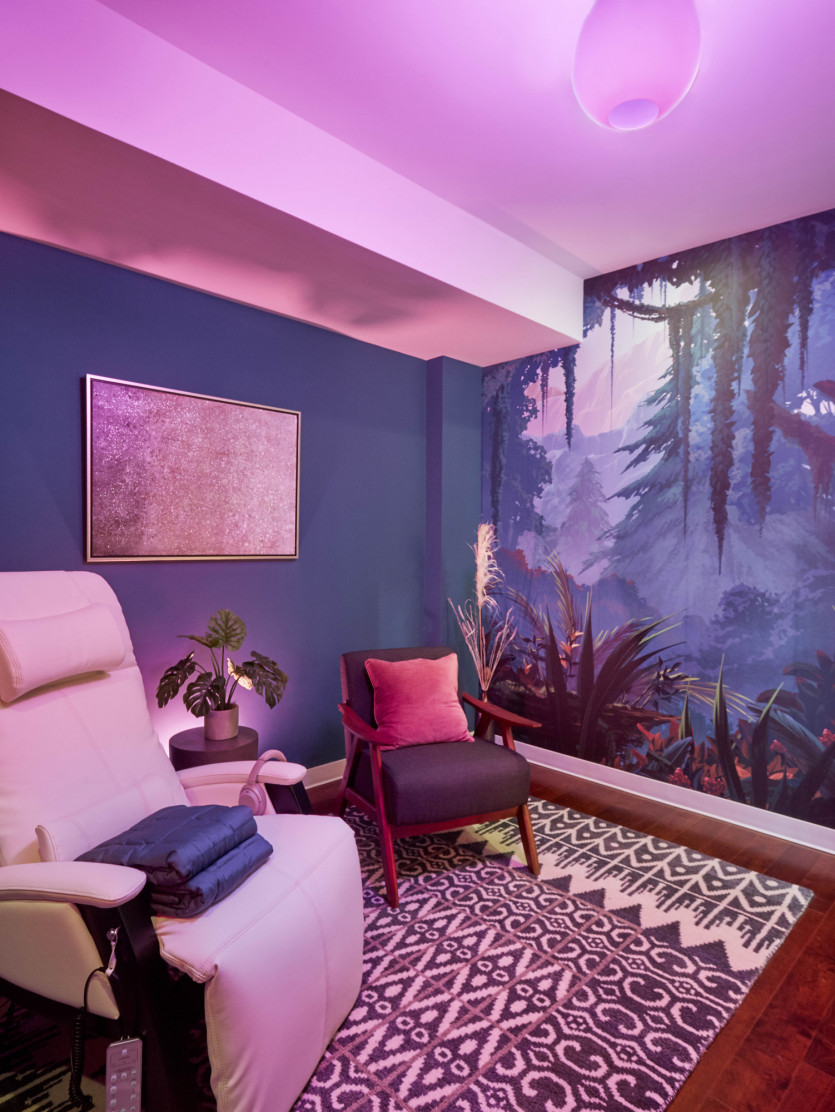 WHO CAN BENEFIT FROM KETAMINE-ASSISTED PSYCHOTHERAPY?

The founders of Field Trip are not alone among mental health professionals in believing that pairing ketamine with talk therapy has the potential as a life-changing mental health treatment. Studies over the last twenty years have shown that ketamine is beneficial for depression, anxiety, and PTSD. It has also been shown to aid in treating eating disorders and addictions.

At Field Trip, a consultation with a psychiatrist helps determine if someone is a viable candidate for the treatment, but those who qualify must have already tried other antidepressant treatments prior to their visit.

For many in the field, however, expanding programs like this so that they are more easily accessible could only yield positive results. “Just about everybody can benefit from therapy, which enables you to process past traumas (we all have them) or understand your emotions better, or see the world from different perspectives. Adding ketamine or other psychedelics to therapy often just makes it easier for people to do these things,” says Levy.

However, Yermus notes that ketamine is not recommended for people with uncontrolled high blood pressure or for severely overweight patients due to concerns with breathing. “It is also not appropriate for people with recent head injuries, severe personality disorders, and can be challenging for those with active substance abuse issues,” he says. 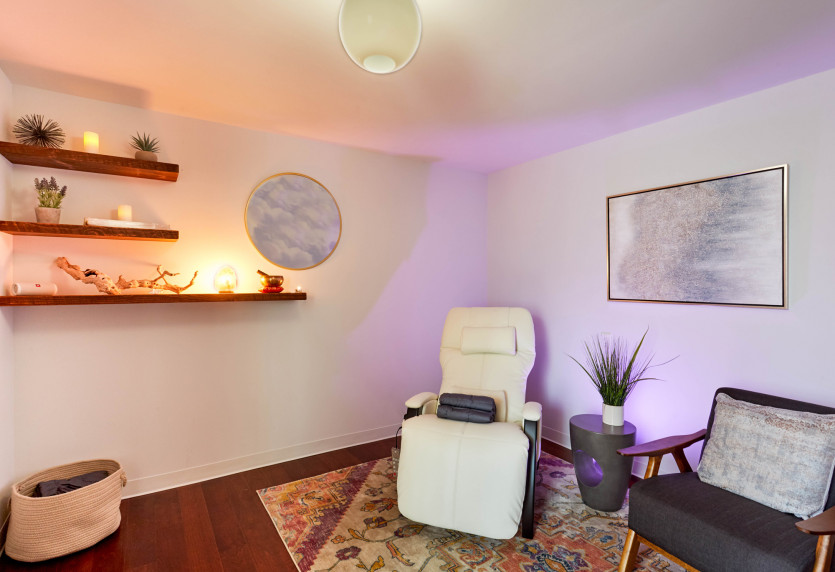 HOW DOES KETAMINE IMPACT DEPRESSION?

On a chemical level, ketamine is an NMDA receptor antagonist that interacts with some of your brain’s neurotransmitters. Dr. Yermus explains that there is evidence that ketamine increases our neural plasticity by activating synaptogenesis, a process that leads to the creation of new synapses in the brain (the space between neurons where chemicals are released).

“The ketamine experience relaxes you into yourself, or we might say from a psychological standpoint, it relaxes your defenses,” Dr. Andrew Tatarsky, founder of the Center for Optimal Living (a mental health clinic with a focus on addiction) explains. “Our patterns [of thinking, in relationships, emotionally] become deeply ingrained in our brains in neutral networks—so they’re very hard to change, but one of the things that ketamine and other psychedelics seem to do is they disrupt those deeply ingrained neural networks, or they loosen them up.”

This can open us up to new learning and new neural networks. So, after a ketamine treatment, there’s a window of increased openness to new experiences. “And so,” he explains, “having a good psychotherapist, or a good group, or whatever your personal growth path is to support you in taking advantage of that window, that’s one way ketamine can sort of catapult you forward in your own personal growth and your own therapy.”

There is (emphatically) no definitive, uniform answer to this question. “Each person’s experience is unique,” Dr. Yermus says. “Some people can have transformative, life-changing experiences during their first ketamine session. Others find the experience to be a more gradual evolution.” One of the hallmarks is that feeling of dissociation—a sense that you are observing yourself from outside yourself. This is one of the reasons it’s thought to be helpful in psychotherapy, by allowing patients to discover a broadened perspective.

“Generally, people describe the experience they have with our ketamine treatments as positive with feelings of warmth and love and safety,” Levy says. “But not always. Sometimes the ketamine experience can be challenging, though that should not be viewed as a negative. All trips, even challenging or scary ones, can be therapeutic. This just underscores the importance of psychedelic therapies being done in a safe and comfortable setting with the right professional support.” 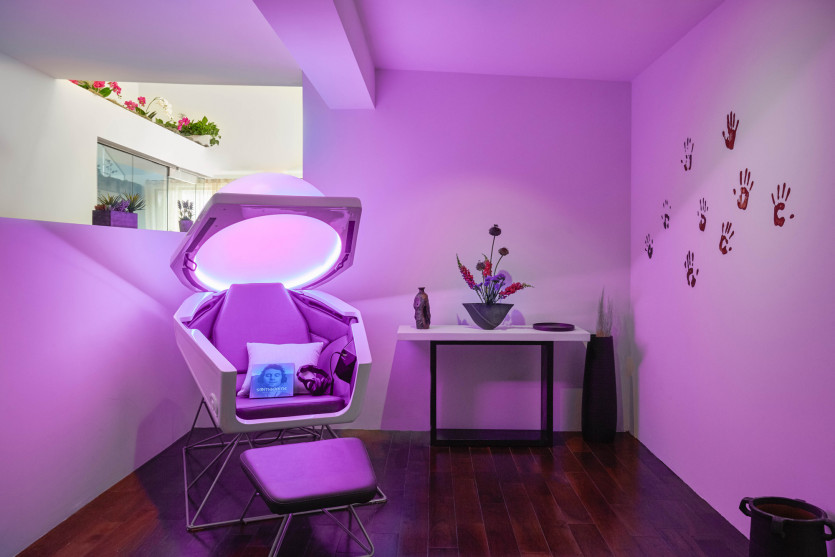 Field Trip is not your average doctor’s office. There are no leather chairs against white walls lined with IVs, nor are there couches to lie on like a traditional psychotherapy setting. Rather, the waiting room looks more like your chicest friend’s living room, with plenty of natural sunlight, a tactile moss wall, and aesthetically minded furniture—all of which is designed to help you have a positive experience (and hopefully avoid a “bad trip”).

Before a session begins, you might sit mesmerized by a coffee table that moves, creating ever-changing sand artwork (it is as trippy as it sounds), or you might spend some time in the Somadome, a pod where a combination of binaural beats and LED color therapy make meditation easier.

Once you go to a treatment room, you’ll be seated in a zero-gravity chair and given the option of being covered in a weighted blanket, wearing an eye mask, and listening to a custom-designed soundtrack. The experience is supplemented with an app, Trip, and patients will often journal in the spa-like recovery room before heading home.

The three- to four-week program is broken into two types of sessions—“explorations” and “integrations”—for a total of 16 sessions. Six of these involve actually taking ketamine via intramuscular injection—these are explorations and last two to three hours each. These are paired with psychotherapy sessions. Apart from the explorations, there are four other psychotherapy treatments (one focused on intake and preparation) and three “integrations” (psychotherapy appointments without ketamine). These are 90 minutes and currently, due to Coronavirus, are being conducted virtually. 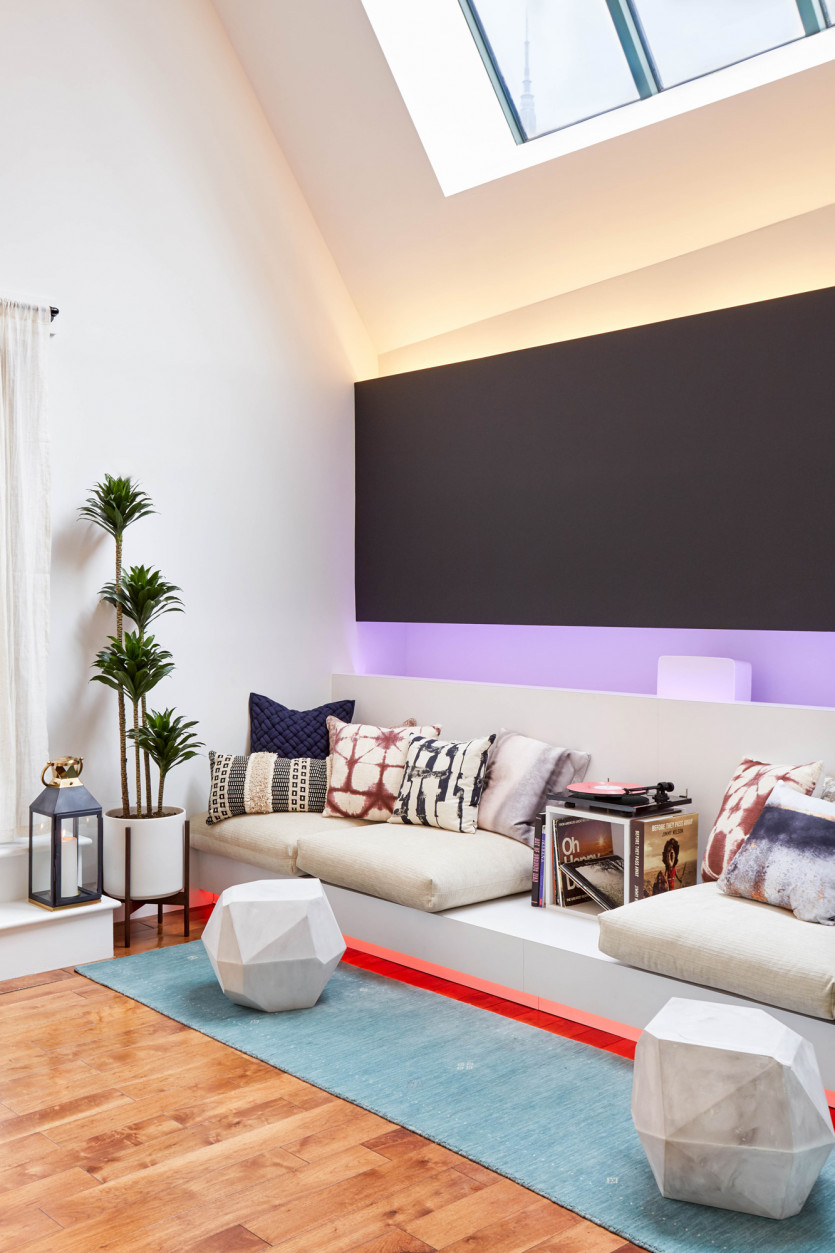 WHAT KIND OF MAINTENANCE IS REQUIRED?

“The evidence suggests that ketamine and ketamine-enhanced therapy can help people remain depression-free, or have substantially reduced symptoms of depression, for weeks or months at a time,” Dr. Yermus says. “The fact that we combine our exploration session with psychotherapy and a digital patient portal should also contribute to a longer-lasting effect,” he adds, explaining that some people also get “boosters” (aka repeated doses of ketamine). However, the frequency with which these are needed (and whether they are needed at all) will vary from person to person.

Dr. Tatarsky is quick to advocate for the continued usage of psychotherapy when ketamine is adjunct in treatment. “There is a danger of people thinking that the ketamine-assisted treatment is a quick fix. And what the research shows, and what clinicians will tell you, is that the ketamine effect is temporary. I think that it won’t replace the need for [continued] psychotherapy for really entrenched challenges that people have.”

Unfortunately, like so many other mental health resources, ketamine treatment is expensive. While the Field Trip Treatment Program costs $4,700, $2,300 of this is for the psychotherapy sessions, and most insurance carriers will provide reimbursement for all or a percentage of this fee. The remaining $2,400, however, applies to the six ketamine treatments and will not be covered by insurance (at least right now). Who’s to say what will change in the years to come, and whether this type of treatment will be sanctioned by insurance providers? We can only hope that additional options, like ketamine, are discovered and studied by professionals, so that the people who require treatment are able to access it—regardless of their economic standing.

Why Forest Bathing Might Be the Key to Lowering Your Stress Levels
How to Amplify Mental Health Among Black Journalists
Black Girl Wellness: A New Cultural Renaissance