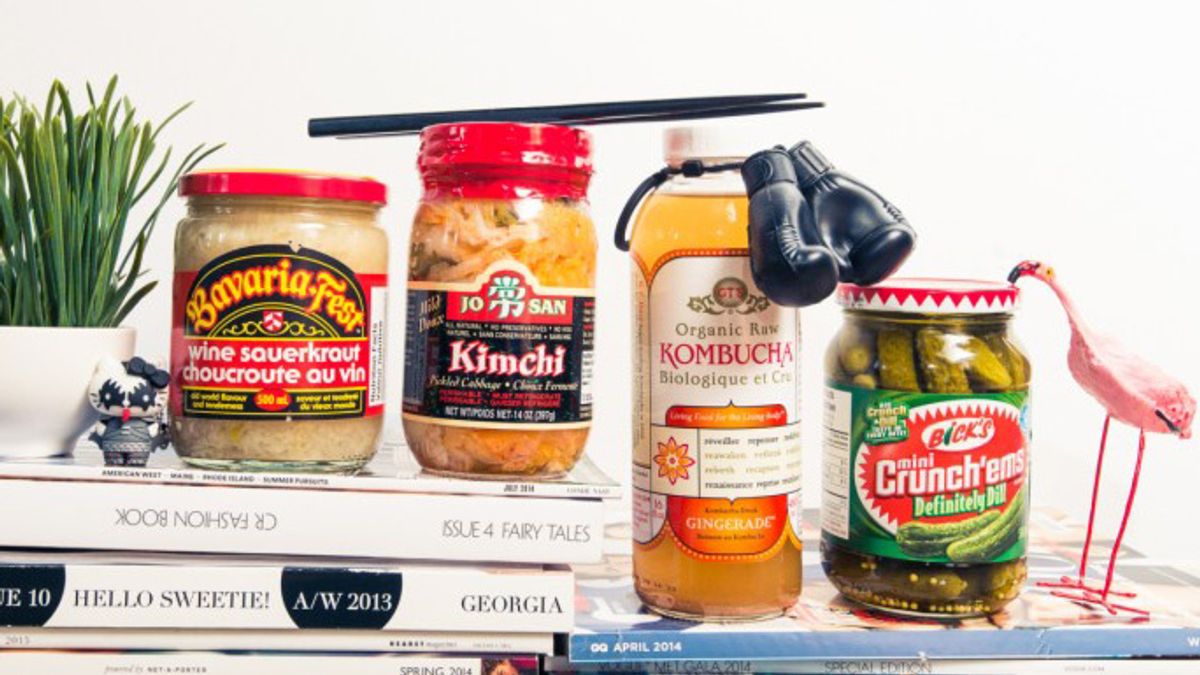 So, Should I Be Taking a Probiotic?

To kombucha or not to kombucha—that is the question.

Since we’re all sitting at home thinking about our immune systems, now seems like a good time to take on some health projects. For example, maybe you’ve always thought it might be smart to take a probiotic every day, but you’ve never really gotten around to doing the research—and you were so busy running around all the time that you probably wouldn’t remember to take it consistently anyway.

Sound familiar? Just like everyone else, we, too, have been hanging out at home taking on some new projects, and at the top of our list: figuring out, once and for all, whether we should be taking a daily probiotic—and if so, what kind.

To put these questions to bed, we reached out to three experts in the field—a naturopathic doctor, a probiotic protein-bar creator, and the “mother of probiotics” herself—for a little tutorial on the ABCs of probiotics. If you’ve ever considered taking a probiotic, or you already take one but you want to learn more, read on.

Should I be taking a daily probiotic?

“Probiotics are great for most people,” says Dr. Nigma Talib, a naturopathic doctor and the author of Younger Skin Starts in the Gut, who was featured on Gwyneth Paltrow’s Goop Netflix show.

“The imbalance of bacteria in your digestive system is linked to how healthy you are overall,” she tells us. She shouts out a laundry list of health and wellness benefits, including “immune function, digestive health, hormone balancing, and even weight loss.”

How do I choose a probiotic?

You can’t turn around in a health food store without knocking over a probiotic—but they’re not all created equal. “Not all have proven quality and efficacy,” Talib says. One good checkpoint to find on the label: “Lactobacillus acidophilus DDS-1 strain is one of the best-studied probiotics in the world, with over 50 years of research,” she says.

She also says it’s important to find a probiotic with “high-quality bifidobacteria, which are one of the most important species of gut bacteria for digestive and overall health.” Talib’s probiotic, Healthy Flora, includes both, as well as grape seed.

In case you’re interested in taking care of your skin while you’re at it, “Grape seed extract is also an excellent antioxidant and helps prevent UVB skin damage, an important factor in skin aging,” Talib says.

Though quality probiotics can be expensive, cutting corners likely won’t do you any favors. “If you aren’t taking quality probiotics, then you are basically flushing your money down the toilet,” she says. “It’s like owning an expensive car and putting lower-quality gas in it.”

When and how should I take a probiotic?

“Any time of day, with or without food, as long as it’s the DDS-1 strain, as it’s highly resistant to stomach acid and highly absorbable,” Talib says. She recommends taking a probiotic with “20 billion [viable organisms] a day—10 billion of each, lactobacillus and bifidobacterium.”

Are there any side effects?

“If they’re taking a good-quality probiotic, most people don’t have side effects, with the exception of if they’re diagnosed with small-intestinal bacteria overgrowth—then the probiotic will be feeding the bad bacteria potentially,” she says. In that case, work with your doctor to figure out the best solution for your situation.

Should I be taking a targeted probiotic—say, a formula for women?

There are plenty of probiotics that claim to be for specific groups—women, men, children, pets, the UTI-prone, and the list goes on. But is that just a marketing ploy? “Yes and no,” Talib says.

“An imbalance means there are too many bad bacteria and not enough good bacteria,” she says. “It can happen due to illness, medication such as antibiotics, poor diet, and more. So, generally speaking, the most common and researched strains are lactobacillus and bifidobacterium.”

In other words, you don’t necessarily have to seek out a special formula—if you find a high-quality probiotic, that should be good enough to balance out whatever’s going on. Lactobacillus and bifidobacterium “seem to work very well for most conditions,” she says.

That said, “Many probiotics contain one of more strains of bacteria and/or yeasts used for a specific concern,” she adds. “Some have dosages with higher CFUs [colony forming units] than others.”

If you’re constantly going to the doctor to get antibiotics for UTIs, you could try a targeted probiotic formulated for those with UTI issues and see if it helps—or you could just try taking a good probiotic.

Should we all be taking probiotics every day for the rest of our lives?

“I always take probiotics, because either I’m traveling or working long hours, which can stress my gut,” Talib says. “You can take a break when you are eating super clean or fasting,” she suggests.

Even if you’re not a probiotic devotee, she also notes that it’s “absolutely” a good idea to be sure to take probiotics if you have to take a course of antibiotics. For best results, though, Talib says probiotics are only really useful if taken as a daily supplement in a larger quantity.

So if I have to take antibiotics, I should take some probiotics, too?

For this one, we turned to Natasha Trenev, the “mother of probiotics,” president and founder of Natren Probiotics, and a 54-year veteran of the health food industry. “One should always take a proper probiotic supplement two hours after every dose of antibiotic,” she tells us.

“When they finish the dose, they should double up on the probiotic supplement for at least two weeks after,” she adds. “Our bodies process food that brings in bacteria from the outside into our bodies.”

If you want to hear something truly terrifying, here you go: “Forty percent of our dry-weight fecal matter is microbes,” Trenev says. “Daily supplementation is something everyone should take on a daily basis to keep that…ecosystem inside our GI tracts optimal.” She makes a solid point.

Should my probiotics be in capsule form, or something else?

“Think about how acidic the stomach is,” Talib says. “It kills the good bacteria when you take [probiotics] in liquid form or in a drink.” She recommends a capsule with the DDS-1 strain, which “survives the acidity and gets absorbed in the intestine.”

On this front, Talib keeps it simple: Kombucha “can sometimes make things worse if the gut isn’t balanced,” she says. It’s best to steer clear if you’re looking to truly rebalance your gut.

Trenev agrees. The “uncontrolled or non-standardized fermentation” in kombucha can result in “too much alcohol or damaging acids,” she says. “It can also result in the production of acetaldehyde, an irritant, carcinogen, and pollutant.”

The problem, she says, is that the process of making kombucha isn’t regulated. “Kombucha tea has no state or federal guidelines that are imposed or checked,” she says. “The bottom line is that no one should consume any fermented products that have no standards and no history of safe use—it’s like playing Russian roulette with your life.”

What about all those probiotic foods I’m seeing out there?

For this one, we spoke with Alden Blease, the founder of R.E.D.D. Bar, a protein-bar company that makes strangely delicious bars. (It takes a lot to get us excited about a protein bar, but these are actually quite good.)

Blease told us that he found shelf-stable probiotics to include in his bars—specifically, “bacillus coagulans and bacillus subtilis,” which are a “widely studied, spore-forming probiotic species.”

If you want to incorporate probiotics into your daily routine, but you’re not into the idea of committing to a pricey supplement, looking for products that contain these types of probiotics could be the way to go.

Don’t probiotics have to be refrigerated to be viable, though?

According to Blease, no. “It was important to find probiotics that were safe, shelf-stable, and with well-studied functionality,” he says. “Probiotic spores are dehydrated and dormant, like seeds—in other words, they don’t need to be refrigerated. Once the spores reach the gastrointestinal tract, they wake up.”

What if I don’t want to take a probiotic every day, but I want to balance my gut?

No prob, Blease says—after all, people have been consuming products with probiotics in them for centuries, long before anyone was formulating capsules in a lab. “I’d recommend consuming probiotics as part of a whole-food matrix, such as yogurt, kefir, sauerkraut, and other fermented foods,” he says. Hey, the more, the merrier—you know we like to have options around here.