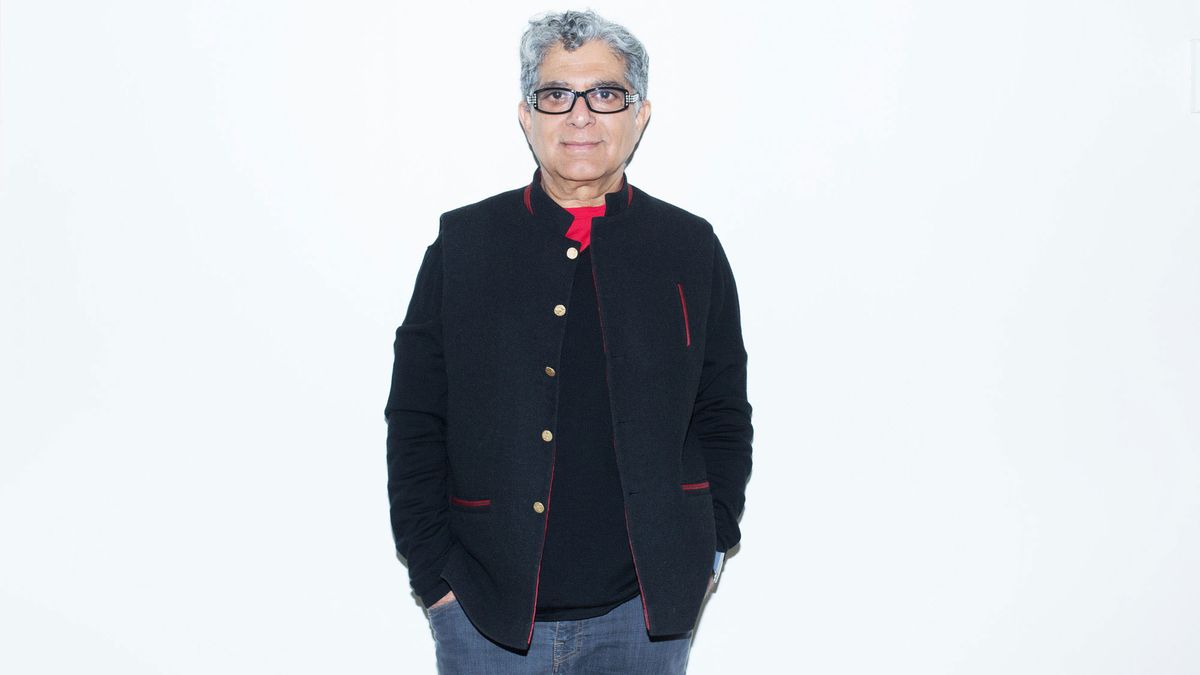 What Deepak Chopra Told Me about Stress, Anxiety, and Happiness

Disclaimer: He may not be optimistic about the planet, but he knows how to enjoy the ride.

Something you may not know about Deepak Chopra is that you can basically walk straight into his office in the middle of Manhattan. Well, sort of. Chopra met me on a sunny Saturday morning and, as he shook my hand at the top of the staircase in ABC Carpet & Home, the eco-luxe department store near Union Square, he hardly stopped his stride—immediately ready to start talking. “Let’s do this!” he said, waving me to follow. (Real headline here: Yes, I got to interview MF-ing Deepak Chopra, the real live genius doctor and Oprah-level guru whose videos I’ve turned to countless times while dealing with breakups, career struggles, or general middle-of-the-weekend existential spiraling.)

His small, sun-drenched office is in a corner at the far end of what is essentially his much bigger office—the Deepak Chopra Homebase, an event space that takes up about half of the mezzanine inside the iconic home store. (Tip: Shoppers can actually walk right in if they want some instant zen in the middle of the island.) But Chopra outsells even his own Homebase. His next big event—the three-day Restore Event, complete with yoga, meditation, panels with guests like Gabrielle Bernstein—will be hosted at the Dream Hotel. The purpose is something I’m terrible at: pausing, calming down, and getting in touch with yourself. But, since I’d like to get good at it, I ask Chopra where to start. See below for his answers.

What does stress really have to do with our health?

“Any disease you want to look at—cancer, heart disease, diabetes, metabolic syndrome, obesity, autoimmune illness, respiratory infection—you’ll find that underlying all of that is what is called ‘low-grade inflammation’ in the body. Inflammation by itself is a protective response. But I’m talking about low-grade inflammation that you’re not even aware of. Most people may feel a little out of sorts, they may feel fatigue, they may have a little bit of insomnia, maybe slight depression, inability to lose weight, or normalize their weight. These are very non-specific symptoms. So, as a physician, when I would see them, I had no explanation, nor did anyone else. We would say, ‘You’re depressed’ or ‘You’re stressed,’ which is, of course, part of the problem also. But now we know that chronic low-grade inflammation is a risk factor for every chronic illness.”

How much does that really contribute to that chance that I’ll have a disease?

“A gene mutation is a genetic mistake that can lead to disease, but only 5 percent [of mutations] are fully penetrant, which means they guarantee the disease. Ninety-five percent of those genetic mistakes that were thought to cause disease actually don’t. They increase the risk of disease, but they don’t cause it. The risk is amplified when there is inflammation. So how do we prevent stress? How do we reverse it? The simplest things are sleep, meditation, exercise, yoga, breathing techniques, and healthy nutrition. Food has a lot to do with inflammation. So do emotions—feelings of anger, hostility, grievances, resentments—if you feel guilt, shame, fear, or stress of any kind, that causes inflammation, too.”

How do you think we’re doing culturally?

“Terribly. Stress is the cause of not only personal illness, but ultimately violence. The world is a projection of our collective stress right now—everything from war to terrorism to scarcity, consciousness, and government, to the stock market. It’s all a reflection of our stress.”

Do you get stressed? Does anything wake you up in the middle of the night?

“I never get stressed. I think the world is doomed, but I don’t get stressed. I help people—those who want to be helped—but there are a lot of people who are not even aware of the fact that they behave like biological robots.”

Tell me what you mean by “biological robot”:

“Well, they’re predictable. Everybody is a bundle of conditioned reflexes and nerves that are constantly being triggered by people and circumstance into predictable outcomes. There’s no creativity, as everybody is recycling the conditioned mind, which is basically crazy, unfortunately.”

So that creates this cycle of stress that’s hard to get out of?

And you’re noticing that it’s getting worse?

“It is, but there’s also big awareness in the medical community because, by the way, medical doctors are the most stressed. They have the highest burnout. They also have the highest addiction amongst all professions—the healthcare provider—they’re noticing it interferes with their ability to take care of other people. It’s becoming very obvious now that it’s measurable. You can measure everything; for example, you can measure what is called ‘heart rate variability,’ which is the beat-to-beat variation of your heart. The more your heart rate varies from moment to moment shows you’re more adaptable and flexible. If your heart rate is very fixed from beat to beat, that’s like an army going to war. Boom, boom, boom, boom. That means too much adrenaline. The higher your heart rate variability, the more flexible, the more adaptable, easier you are. The more stressed you are, it’s fixed. That’s so sensitive. If you are in an argument with your boyfriend or your husband last night, it will pick it up. In a pregnant woman, if she has been a smoker and she takes up smoking cigarettes, the heart rate of the fetus will change in the womb in anticipation of the stress.”

Yet you say that you’re not feeling so stressed about the state of the world...

“I think the world is doomed, no matter what [laughs]. I’ve had a good life. I’m concerned about the future generation with climate change, with economic disparities, social injustice, extinction of species, poisonings of food chain, atom bombs, biological warfare, internet hacking... I think we’re screwed.”

Is it innate that you’re able to stay calm in the face of all that, or has that been practiced?

“It’s been practiced for several decades. You learn to manage stress, just as you learn to ride a bicycle. Everything is learnable. Everybody should know how to manage their stress, but they don’t. And now suddenly mindfulness, meditation, yoga have become very popular because people find that they’re living with more awareness.”

What did it take to get the medical community to accept the mind-body connection?

“Thousands of studies. The mind, the brain system, the immune system, the endocrine system, which is the hormonal system, the genetic activity in your body, the microbiome—all of this is interconnected. There’s no separation between your mind, your brain, your immune system, endocrine system, your microbiome, and your genome. And now there’s this whole new science called epigenetics. It’s not the studies that matter anymore because there are thousands. What we need to change now, which is also happening, is the training of medical students, residents, and doctors. At checkups doctors will ask, ‘What’s your personal relationship? Your social interactions? Are you happy at your job?’ All of that is important.”

What do you think is the next school of thought that is not yet accepted?

“It’s an understanding of what we call consciousness. Right now, in science there’s an expression called ‘the hard problem of consciousness.’ What is ‘the hard problem of consciousness’? It means that we cannot, at the moment, explain any experience, like this experience—where is this experience happening? Some people would say it’s in the brain. This room doesn’t fit inside your brain. Where is the experience in your body happening? It’s not in your brain. Where is imagination happening? It’s not in the brain. The brain records the experience—you, as a conscious being, are having that experience. In old traditions, they used the word spirit or soul for this part of our existence, and science doesn’t use those terms. Science is not having to confront consciousness. What is consciousness? How does it create perception or thought or imagination or creativity or insight or intuition? So what is the basis of mental and physical experience? That’s the next frontier in science.”

“I think where this is leading, and other people may disagree with me, is that what we call the physical world actually does not exist. Physical world is an interpretation of sensations, images, feelings, and thoughts, which are in turn expressions of consciousness. So consciousness is the key to getting over constructs of birth, death, afterlife, God; all of that.”

I hear people talk about living in a simulation. It reminds me of that:

“Well, this is a human simulation because this experience that we are having right now is not the experience of a dolphin, or a bat, or a caterpillar, or an insect with a hundred eyes. There’s no such thing as a physical world. It’s just how you perceive it, and that perception is species-specific—culture-specific. And also determined by your conditioned mind, whether that condition was religious, or cultural, or economic, or ethnic... People perceive the world in different ways.”

And I would guess a meditative practice helps you get more in touch with that:

“That’s the real reason for meditation.”

Mindfulness
More From the series Wellness