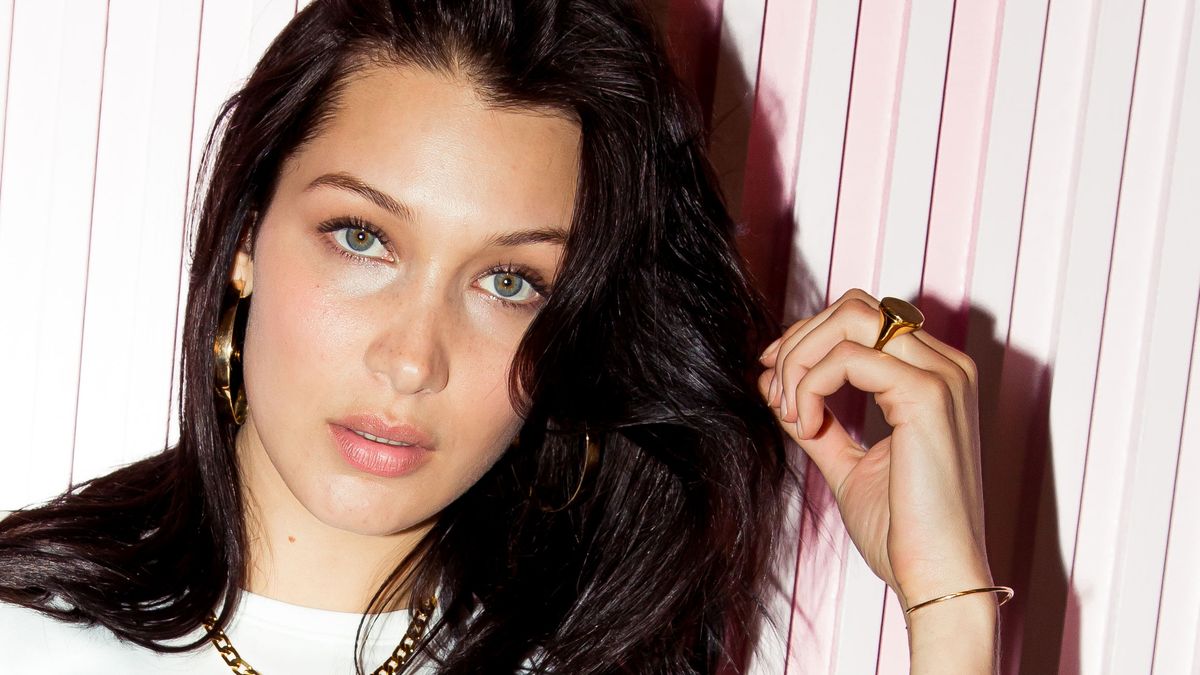 Plus, the healthy thing she does when she wakes up and how she finds time to chill out.

Bella Hadid is sitting cross-legged in her private bungalow—a sanctuary of sorts for the model, amidst a packed day of shooting the Nike Cortez campaign around Hollywood. “If I overwork my body, I can tell almost instantly,” Hadid divulges as she sweeps her dark hair to one side. “I used to just blow it over and keep working, but now I know I need to take a break. I need to be able to take some ‘me’ time throughout the day, because it can get hectic.”

Hadid’s been on a seemingly endless world tour—always on a runway, starring in infinite campaigns, baring legs on the red carpet of Cannes, and peppering in much-needed paradisiacal vacations with her equally clouted best friends. And while she always does overtly glamorous things, she almost always would rather be in sneakers. “I love wearing a pair of Levi’s with a t-shirt. The [Nike] Cortez is amazing on its own, but to be able to put it with any outfit is so cool. You can mix and match it with a black dress or Levi’s or sweatpants—whatever you want,” she tells us. “I probably have fifty pairs of sneakers. I need to start donating them, I feel bad having that many.”

It only feels a bit ironic that we find ourselves talking about balance with the model during the few minutes she has for lunch between shoots. But it doesn’t seem to faze her. “Right now I don’t have a lot of time to do anything,” she laughs while twirling the gold signet ring on her finger. “I used to love going to yoga on Thursday nights to just chill and breathe, and have an hour to not think about anything but myself.”

While she claims to not be “really big on exercising,” Hadid tries to stick to a few healthy habits nonetheless. “When I first wake up in the morning, I always have my lemon water. It just feel a little healthier than drinking regular water,” she says. “I feel better when I have a lot of greens and drink juices. When I eat badly for a while, I need to do a Monday-Wednesday cleanse to be able to flush everything out and detox.” But extremes aren’t really her thing—although she does confess to trying out a particularly intense cleanse once: “I’ve done some crazy shit. This lemon cayenne juice cleanse is next level. It doesn’t sound crazy, and then once you’re in it and you’re like, ‘What is life? What is going on?’”

Hadid openly struggles with Lyme disease, an autoimmune disease, which she’s said often leaves her bedridden. She credits a healthy lifestyle for giving her the energy she needs to make it through her day. “My body can’t handle aggressive workouts. [For me] it’s more about being the best I can be, not about losing weight. [Weight loss] comes naturally, but it is about being fit and feeling strong. When I wake up in the morning and I don’t feel strong, I feel like I shouldn’t even get out of bed.”