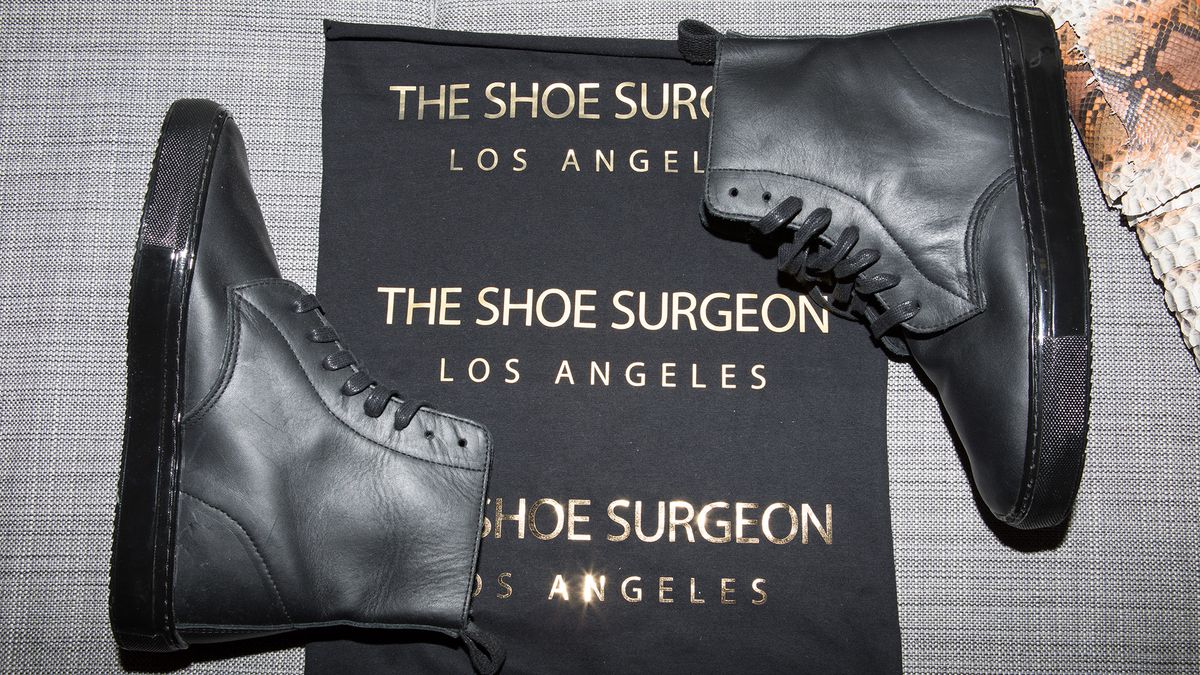 What It’s Like To Customize Sneakers For Riff Raff

The Shoe Surgeon is the go-to man creating the most extravagant pairs.

We’re learning quite a few things this Sneaker Week, like: how to protect your sneakers in the winter, what designer sneakers are *actually* worth the investment, and what goes into designing a shoe store (among many other things). Then we started hearing about a whole other side to the industry: custom designed sneakers. Specifically by one man in particular, Dominic Chambrone of The Shoe Surgeon. When Chambrone isn’t flying around the world teaching at his Sneaker School, he’s working in his California-based studio customizing sneakers for a wide variety of clients by the likes of Riff Raff, Justin Bieber, and Jerry Ferrara included. His skills aren’t limited and Chambrone can do pretty much anything, from a suede fringe backing to adding python, shark, and gator skin all onto one shoe. Guys, he’s even done a custom snakeskin sole on a pair of Saint Laurent heels. You name it, he’s done it. Keep on scrollin’ to hear about the first pair of shoes Chambrone ever painted, who he is dying to collaborate with, and all the details of a few upcoming projects.

How he first knew he wanted to work with sneakers:

“I was an artist in high school. I think I was 15 years old and I hand-painted my first pair of shoes—the feeling I got from people’s reactions was pretty amazing, so that’s what kept me going. I knew what I wanted to do, but I didn’t really know how big it would get.”

Where the idea for The Shoe Surgeon came from:

“The Shoe Surgeon originally was Shoe Surgeons, because it was me and a friend, and that came about when I was about 19 years old. I had lived in Charlotte, North Carolina, for about a year, and we drove up to New York City and I was just kind of like, ‘Oh, we need to think of a name for ourselves.’ We were writing down a bunch of stuff and ‘Shoe Surgeons’ clicked. Six months later it became The Shoe Surgeon.”

What his clients come to him for:

How the process works:

“There’s a couple different tiered systems we have. One would be a full bespoke, where a client gets to book an appointment, come into the space where we sit down and discuss the shoe they want to create. They get to pick everything from the material for every panel, to the design, to the thread color. So that would be the most expensive option. Then there is an online order where clients either see something they like and they’ll say, ‘Can you make this?’ If we can, we will, or we book a phone call where I get to go over the shoe they want and the materials. [Also] now you can buy stuff off the website and we also do custom releases, where we’ll release a custom shoe once a month.”

“[On my team there are] four people, including me. I’m normally working on five to ten pairs a day, and a variety of different jobs. It can take anywhere from 24 hours to 40 hours [to customize one pair of sneakers].”

On how he learned his skills:

“I taught myself most of what I know. I did a little bit of apprenticeship in shoe repair, which doesn’t really translate in shoe-making—it’s more of fixing and repairing. Then I took a [one-]week traditional shoe-making class in Acton, Oregon. They didn’t do sneakers and they didn’t know how to deconstruct shoes but I took this class and I still have the original pair I designed from scratch. [My teacher] was nice enough to try to help teach me, even though he didn’t have any background in sneakers. The pair was pretty bad, so it was still a lot of trial and error.”

On The Shoe Surgeon Sneaker School:

“The first one was in Brooklyn, at a shoemaker’s shared space. Then the second one was held was in downtown L.A. at Relativity School. We’re gonna be doing some in Philly. It’s a five-day intensive class on deconstruction and reconstruction, mixed with traditional shoe-making.”

His thoughts on how the sneaker industry has changed:

“It’s becoming an even bigger business; a lot of independents are jumping on and making sneakers. Even shoemakers that never really cared about sneakers, they see what’s happening and now they’re like, ‘Oh, I can make sneakers.’ It’s definitely changing—I guess you can say for the better. That’s why I teach the classes as well. If I can teach students something that took me 15 years, in a day class, I think it would help boost makers in the US as well as just the whole sneaker industry and production in America.”

The most memorable shoes he customized:

“The first pair that I painted for myself was probably the most memorable because of the feeling that I got when I was wearing them. Everyone wondered where I got them—it was kind of an aha moment. They were all-white Air Force One mids that I painted all-camouflage. Other than that, I made a pair of shoes for Chad Muska. My friend did the original design—it was a Supra Skytop 3—and I came up with a couple designs. I had to get it done in a week and none of the designs stuck with me. Then the night before (I still hadn’t started), I was in my garage at the time, and I saw some pendleton material just laying there, and it kind of yelled at me. So I made a pair of shoes that I was just pretty much in love with overnight.”

The absolute craziest customization he has ever done:

“I would say [the one I did] for Law & Order [was the craziest]. I did a full custom sole and it was used in the TV show. It was the shoe the murderer wore in the episode, so it was pretty fun and just crazy because I had to hand-make the bottom of the sole.”

If he could only ever work with one material for the rest of his life:

“It would probably be something I haven’t used yet, the stuff that Bionic Yarn uses: recycled plastics. Basically, what they do is collect old plastic bottles and debris from the ocean and weave it into a fabric. I haven’t used it yet because it’s expensive and you need a big minimum, but that’s the way I think fashion should be going.”

His favorite pair of sneakers:

“Honestly, it just hasn’t been made yet. It’s one of those things that—I don’t even wear my stuff just because I haven’t gotten to the point where I would want to wear what I make. So I guess my answer would be I haven’t made it yet.”

On if he himself is a sneakerhead:

“No, I mean, I guess now in the past year, all the big companies are starting to send me a bunch of shoes, so my collection is growing, but I couldn’t care less. I used to wear all-white Vans Low Pro that would just get so dirty and I’d wear those everywhere. If anyone ever asked me, ‘What do you do?’ I’d tell them I make shoes and they’d look at my shoes and they’d shake their head.”

“We’re going to be doing an official collaboration with West Coast Shoe Company up in Oregon—they make logger boots and work boots, so we’re doing something that hasn’t really been done. We’re turning one of their boots into a sneaker and that’s going to be pretty big. We’re working on a collaboration with a company in Amsterdam. I’m taking one of their silhouettes and we’re gonna produce it in my studio. I’m actually doing a collaboration with a candlemaker because scent is huge for me, it’s something that I love. Detroit Wick and I are making custom scented candles with a custom vessel.”

“That would be with Pharrell Williams. When I was 17, 18, 19, he was a big influence on my fashion sense as well as music taste. I actually ran into him at the BAPE store and it was kind of when everything came to fruition.”