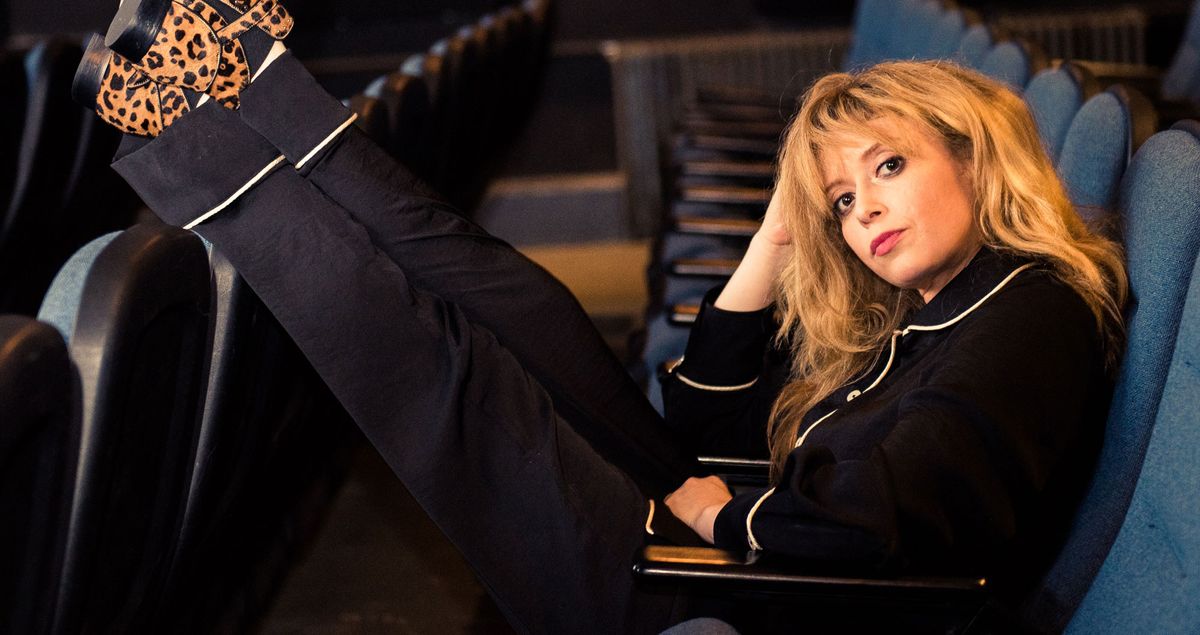 We’re going to go out on a limb here and say that we’ve never laughed as much on a shoot as that time we followed Natasha Lyonne around the East Village for a day. We know, it’s not all that surprising considering the actress’ comedic rise to fame in the American Pie series (throwback!) and dishing out all sorts of NSFW jokes as Nicky Nichols on everyone’s favorite Netflix show, Orange Is the New Black. But there are some things we learned about Lyonne after stalking her around Manhattan that may be a little surprising (and that you can’t find on her Wikipedia page). For example, her likes: East Village anonymity, napping in dark theatres, boiled Ukrainian food, antique shopping. And dislikes: waiting in trendy restaurant lines, double cheek kisses, trendy antlers.

These are just a few of the things we picked up on after chatting with her during her ideal day in New York. Which, while it may sound pretty normal: a movie, then lunch, followed by a shopping excursion, in true Lyonne fashion, we can vouch that this is so not your typical guide to the big city. Regardless of whether you’re a true New Yorker or tourist, if you’re after a really solid, really local, kinda dirty (with a touch of mistreatment from grumpy owners), kinda East Village afternoon—no fancy pants retail shops or avocado toast brunch lines in sight—this is your guide.

“I love how things are familiar but also always strange in the East Village—there are always strangers. There are some days where it's just crazy; you're just running into person after person on the street, but I would say there's still a healthy amount of anonymity to be had in Manhattan. And, I don't even mean that just because I'm an actress...in terms of my childhood, there's that feeling of being alone in the world in the big city but there are also so many people. Like they say, the best hiding places are always in plain sight."

“There is something very grounding about the size of the buildings in Manhattan. To look up and realize just how consequential you and your problems are relative to how much is actually going on in the world. You know that there are high-stake situations happening in every window and in every building, and everybody thinks that they're so crucial because they have their own problems. I feel like that's very comforting to remember we aren’t.

“Another incredible quality of Manhattan is that it really supports whatever mood you're in. If you're on top of the world, on a honeymoon phase with a new boyfriend, just found a nice man with a great job, looked in the mirror and think you look great, New York is suddenly the best city in the world. It's just like a Frank Sinatra song, and similarly, if you're down-and-out, life has lost all meaning and, just never comes together, New York really supports that. You can feel safe in the weight of that. And these places support both those moods.”

“I've been going here for many, many years, since I’ve lived in the East village on and off for a better part of two decades now. I've also done a lot of sleeping here, because I spend a lot of time falling asleep during movies. The films here are so artsy—I love Stan Brakhage, but I can't promise you I've made it through a full movie. I'm easily distracted. I'll tell you another secret I'm not proud of, which is that I've seen some Jean Renoir movies there and wasn't a massive fan in those years. But it certainly is a great feeling to watch a movie you love here. I’m always one of like four people in the theater, that's how I like things. It’s appealing that in this big world and big, busy city, there are some places just by the sheer virtue of their kind, that are empty all the time. You can go and find these kinds of oases, these retreats, these places of peace within all the muck and the noise. It’s also great because it's been there so long; there have been so many heart-breaking deaths of these theaters."

“The Film Archives also has some great revivals that I really need to get to. I guess that's another great thing about New York, that there are so many things happening all the time. There have been times when I've decided to go see every revival possible in New York. I used to walk around town with the Film Forum schedule and set up dates with strange men at the bar. I'd just walk up and say, ‘Alright, which one do you want to see?’ And then write down their phone number by the movie and say, ‘I'll see you there.’ That would be my system of operations. I was going to go regardless, and it really worked.”

“I've rarely seen this place bumping where you can't get a table. How pathetic is it that there are so many places that people are waiting in line for, and then there’s this place? Unless it was the depression era or something, then maybe I could get it. You know, a food line out of necessity is one thing, but the idea that I'm going to wait for a cronut for four hours is just the definition of ridiculousness—and I've had cronuts, they're great. I'm not saying they don't taste good, but what are you doing? There's definitely something wrong with you. How have we as a society decided to accept that waiting for hours for food is somehow reasonable and cute. I just cannot get behind it. When I'm with my boyfriend and there's a line outside a restaurant we’ll never go there again, it should be appealing but we find it offensive. There are some places that are so special in their being insanely delicious and bound for the East Village, and also seem so empty. And that's really a perfect place. So I'll be over at the East Village Ukraine Restaurant.

“I remember trying to throw my birthday party here. Luba, the owner, was so aggravated that I was trying to give her my money. Like it was such a hassle for her. She was like, ‘I have a lot going on right now. I don't know about your party.’ And I was like, ‘I just want to throw a party here.’ She would always tell me to come back tomorrow. If I asked to call, she’d say she was too busy for phone calls. I had to personally go in there four or five times before I got approval for a birthday party. There's something I really trust about that. And now we’ve become friends and we hug and stuff. It is such a great feeling of like, I've really made it in the big city. I remember when people arrived at my birthday party here and you could just see their faces drop into relief that they could leave their big city mask out the door and relax into themselves a little. Instead of having to puff out their shoulders and fake knowing everybody in the room."

“I'm not interested in anybody kissing me twice on the face. All right. I don't need both cheeks, I'm not European. I'm good, I’m from New York. I only need one cheek. Better yet, how about no touching? Okay? Because I don't know where you've been. I'm a ‘no cheek’ kisser. I'm all good on the owner of a place walking out and giving me like a double cheek air kiss and letting me know that he's gonna look for a spot for me if I ‘just wait for 15 minutes’. You know a lot of women are also standing around wearing stilettos, they can't walk, then there’s some air-kissing and like, ‘it will be 45 minutes and then we'll see you." Like, what the fuck about that whole situation do people think is so great? I definitely don't need that shit in my life at all. There's nothing I find appealing or glamorous about it...that’s why I like Luba and this place. The food is great, it's actually good homemade food. You know?

“I’ve never ordered the boiled sausage until today, but it's strongly recommended. Strange meats can be suspicious at first glance, but they taste pretty good. The perogies are also delicious. To all the people reading this on the internet, go get your perogies! And applesauce and sour cream. Also, I always find that a place like this makes an awfully satisfying salad. Just having sort of low expectations and then being pleasantly surprised. Also knowing you’re not taking yourself up for a $300 meal. And you're not totally disappointed by that American Psycho aspect of one fish roll or one leaf on your plate. Besides Ukrainian food, I do love an omelet. Next time we do this I'm going to be going for an omelet type of scene.”

“I like the city's best kept secrets kind of places, like Obscura Antiques, more than waiting online all day for Barney's sample sale or some shit. I'm good on that. I'd rather be at an Obscura buying a strange lamb heart in a jar that I can give a friend for Christmas rather than a Comme des Garçons wallet. Come on, everybody wants a lamb's heart. They can go buy themselves a wallet.

“None of these places are emotionally available on the internet either. You know what I mean? There's no way to know the experience of these places without actually stepping foot inside them. And then it becomes something else. Also, if you don't want to run into too many people when you're out and about, all these places have rude owners in common, which I think is a great and undervalued quality."

“They have great things at Obscura. Like a hoof that's an ashtray, all kinds of things. A lamp that's an aluminum helmet or whatever. They're really good looking things. I would like for my apartment to be only odd ball collections. But like, really high-quality great looking shit. I will say that if I never see another pair of antlers for the rest of my life, I'll be happy. I think we reached peak antler—they hit their tipping point and they're lost now. So if I walk into your Williamsburg apartment and you're trying to sleep with me and I catch a bunch of antlers on the wall and no books on the shelves, I'm getting out of there.”

“I like the New York Marble Cemetery (also called the Second Avenue Cemetery). I'm ready to go tomorrow just to be buried there. It seems like it's a very complex, hard thing to do. But just imagine how convenient that would be for your friends, ‘Oh my God. What a relief, she's just right here, around the corner. We can totally visit her.’

“In the East Village, there's still enough of the quality real, depressed kind of New York happening far enough east. But then it sort of filters up and you get a nice cross-section zone around Avenue B. There are areas that are already too gentrified around 10th Street—like espresso places with six dollar cappuccinos.

“I was living in Soho for a few years and I really hated leaving the house. It was just too much—everybody is trying so hard, just walking down the street. Where are they going? Is there a photo shoot happening I'm not aware of?”