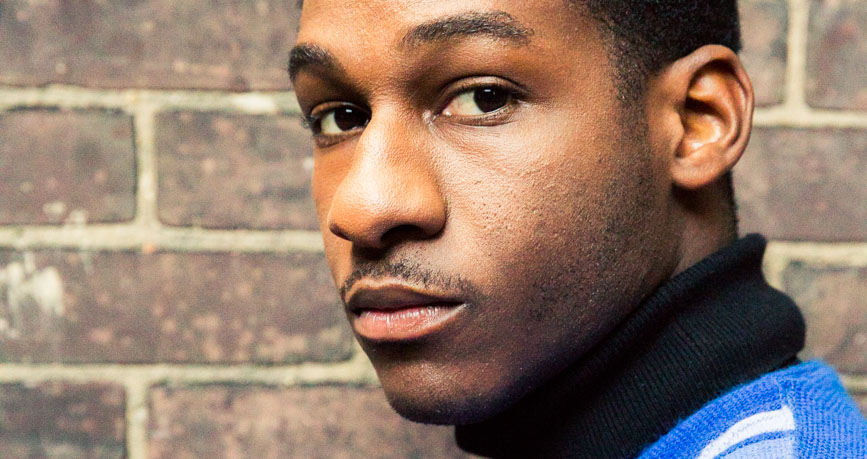 Backstage with our latest musical obsession.

If there's been one consistent album that has unwaveringly served as a soundtrack here at TC HQ, it might just be Leon Bridges' Coming Home. We're pretty sure it's blasted out of the headphones of at least half the staff here at one point or another, and there's considerable reason why: it's the sonic equivalent of comfort food. It's nostalgic and soulful without being ham-y or kitschy. And so when we heard Bridges was playing a show in our native Toronto, it was a no-brainer for us to head directly from the airport (true story) to interview him (and, not going to lie, catch his show, too). We talked about everything from his pre-show fuel of choice (hamburgers, ideally with a side of fries), soundtrack (Drake, because "same", said everyone in literally the entire world) and his never-ending quest to find the perfect suit (hang in there, Leon). And wouldn't you know it? He's playing SNL this weekend, too. Get acquainted now, guys.

ON HIS GO-TO SHOOT LOOK & FINDING THE PERFECT SUIT:

"When I play shows, it’s mostly just suits, you know? Sometimes when I’m in a hurry I have to throw on just a nice blazer, but mostly suits.

I’m still looking for the perfect suit. I haven’t got any hookups yet, but a lot of the suits that I have are from photo shoots that I’ve done and they were gifted to me. But I haven’t got a suit that fits right. A lot of the suits I have, they’re very fitting, the pants are very skinny, but I’d like something a little bit more loose. I still have yet to find that perfect suit." 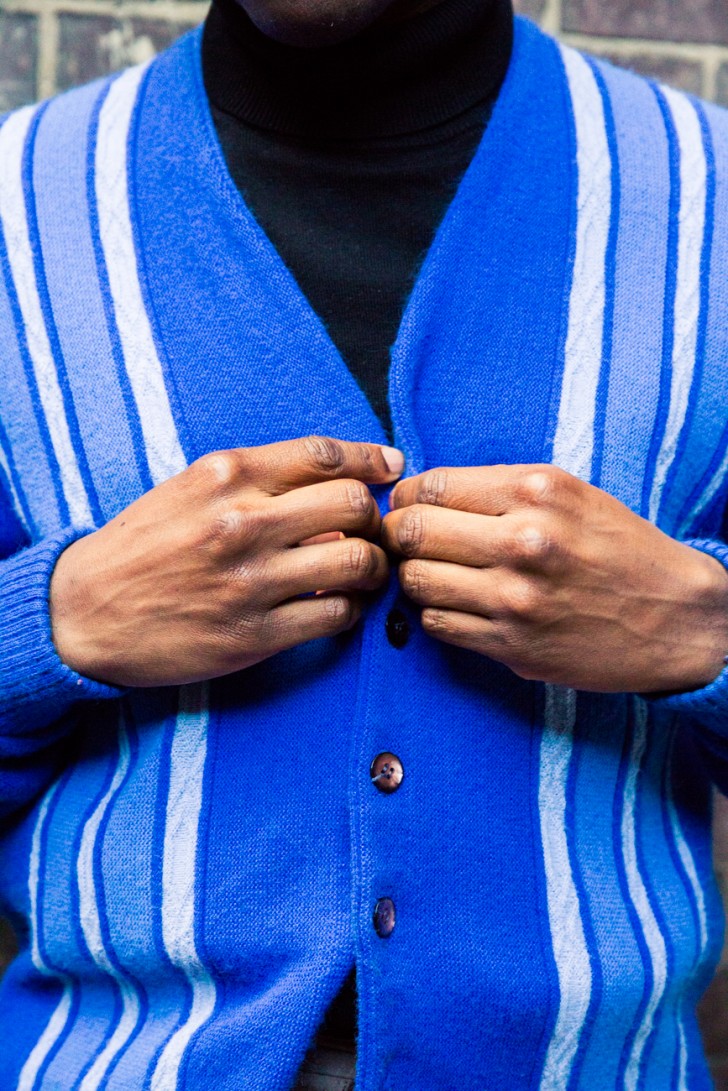 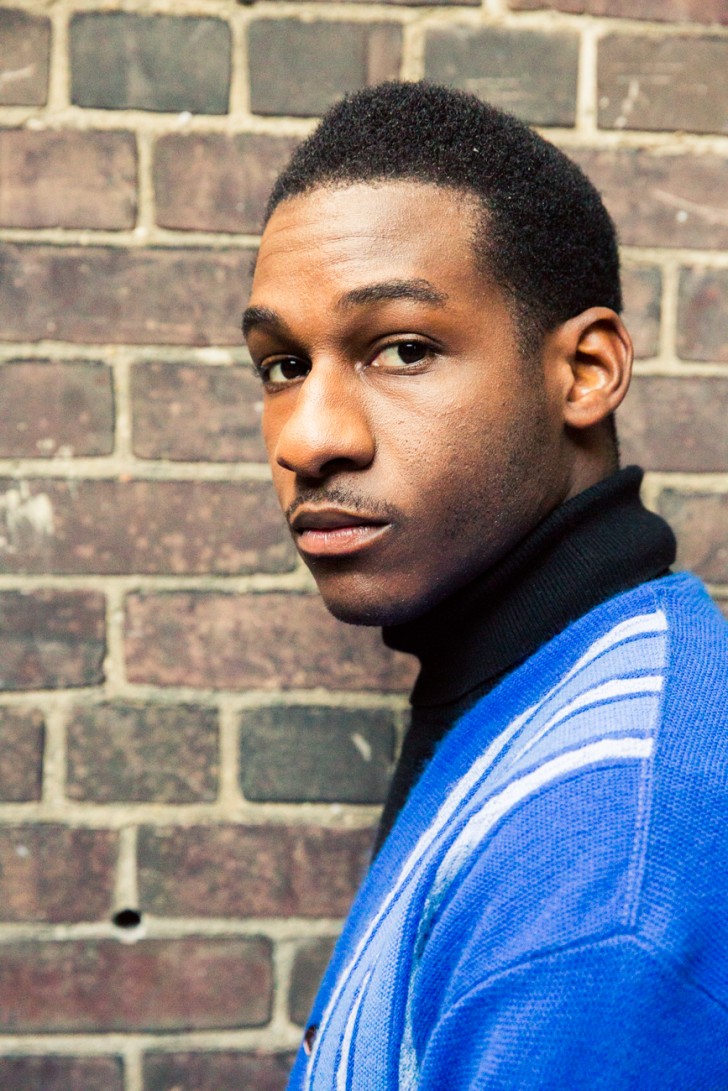 ON WHERE HIS STYLE COMES FROM:

"A lot of different things. I’ve always loved to see pictures of young black men back in the ‘50s and see that every single one of them were so fresh and classic—high waist pants or if they’re going casual, a nice short-sleeve collar[ed shirt]. Sometimes they rocked the hats—I love that, so I like to pull from that. I’ve really been trying to go back to early ‘50s fashion. This [current outfit] is more like the ‘60s, but I’m trying to go back to the early ‘50s. Keep it simple."

ON HIS STYLE ICONS:

"Gene Kelly, Otis Redding, Bob Dylan. All those rock stars back in the early ‘60s and the ‘50s always look cool—just chilling. Even some of those old jazz guys, they were so cool looking."

"It started for me way back when I was pursuing and studying dance. It even goes back to when I was a kid. I remember as a kid, I always wanted to wear a suit, but I couldn’t afford one. So I told myself, ‘If I ever can afford a suit on day, I will wear it everyday.’ And so when I started dancing, at the end of the semester we’d have to do a piece, like an hour long dance concert, so we’d learn different choreography and for each dance, we had to go to the costume shop in the school to look for the costume for that dance. Being in there, and looking through all the racks and seeing different vintage clothing, is what started it—I’d take things home that I wasn’t supposed to. That’s kind of how it started." 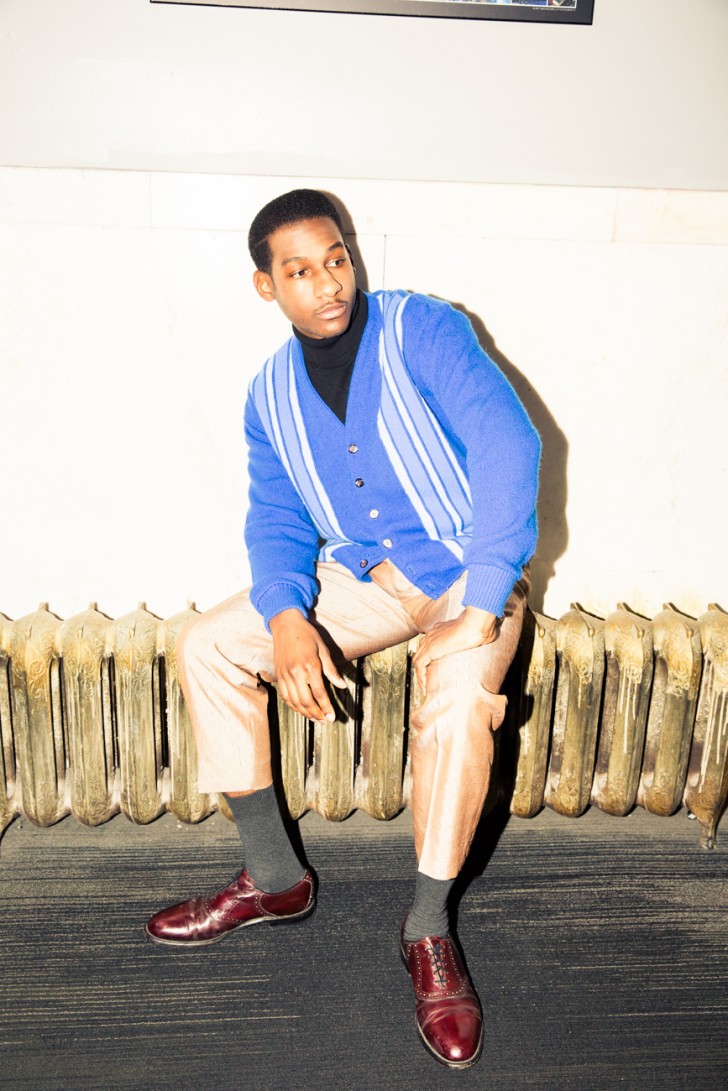 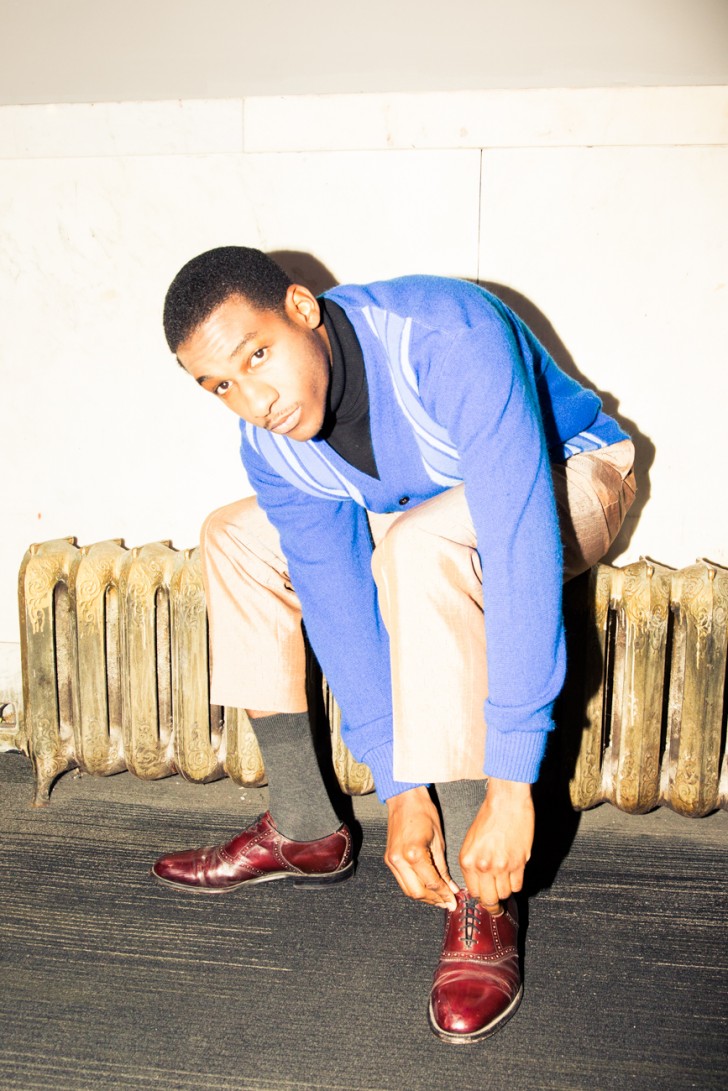 ON STARTING HIS CAREER AS A DANCER:

"I started doing a lot of the hip hop—popping and locking and waving—when I was about eleven years old, inspired by like Michael Jackson, Usher, Ginuwine. Just seeing those guys in their videos. So I tried to learn it by myself, and then I got to college and I originally went to take just some basic classes, but they offered a dance program, and so I thought it would be a great opportunity to become more versatile as a dancer. So I took ballet, jazz, African, modern—just the foundations. I never really became a pro, but I learned the basics, and so really that taught me and gave me confidence on stage. Before, the only time I had been on the stage was singing a talent show in high school or whatever, and I was scared out of my butt to get on stage. Then when I got into dance, it really gave me confidence, and I carried that on now that I’m in my career, I can take bits and pieces of what I learned and really do my own thing with it when I’m on stage. Like, subtle dance movement when I’m on stage. I say that everything I learned in dance has helped me toward my everyday life. Just like learning to use my core, you know in ballet, [now] when I’m lifting up something heavy it’s like ‘yeah, boom! Use your core, tighten it up.’" 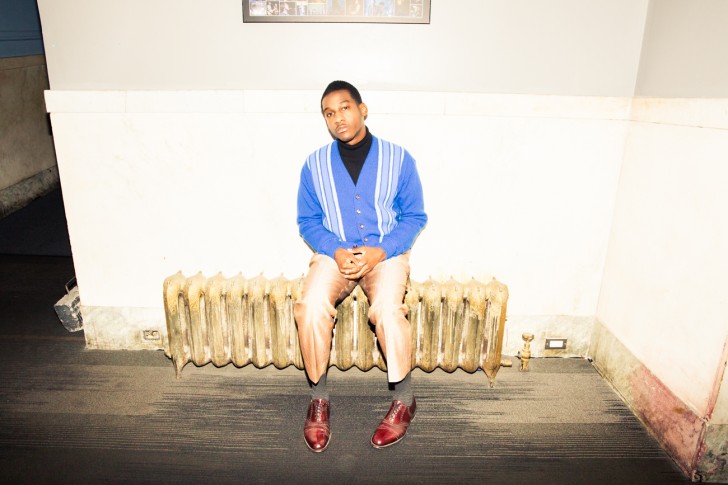 ON HIS GROOMING ROUTINE:

"With this, I can’t trust any other barber. I tried it, but a lot of barbers, they try to get that crisp edge. And when you have to get that crisp edge, it pushes the hairline all the way back, and it takes a long time for that to grow back. On the road, I can do it myself. I actually wanted to go to school to be a barber back in the day. I usually like fade it up, boom. And I can take my old clippers, and I always get the wedge. And I always like the swoop down. I can cut it like that or I can just—boom! I’ll take the scissors and [makes cutting sounds]."

ON HOW GROWING UP IN TEXAS INFLUENCES HIS SOUND:

"My roots come from two different places—New Orleans and Texas. My family is from New Orleans, really deep-rooted in New Orleans, and then I grew up in Texas. So what we do is like we do soul, but we don’t forget about the Texas roots that are part of us—like the country, soul, rock’n’roll and blues thing is what we really embody within our music." 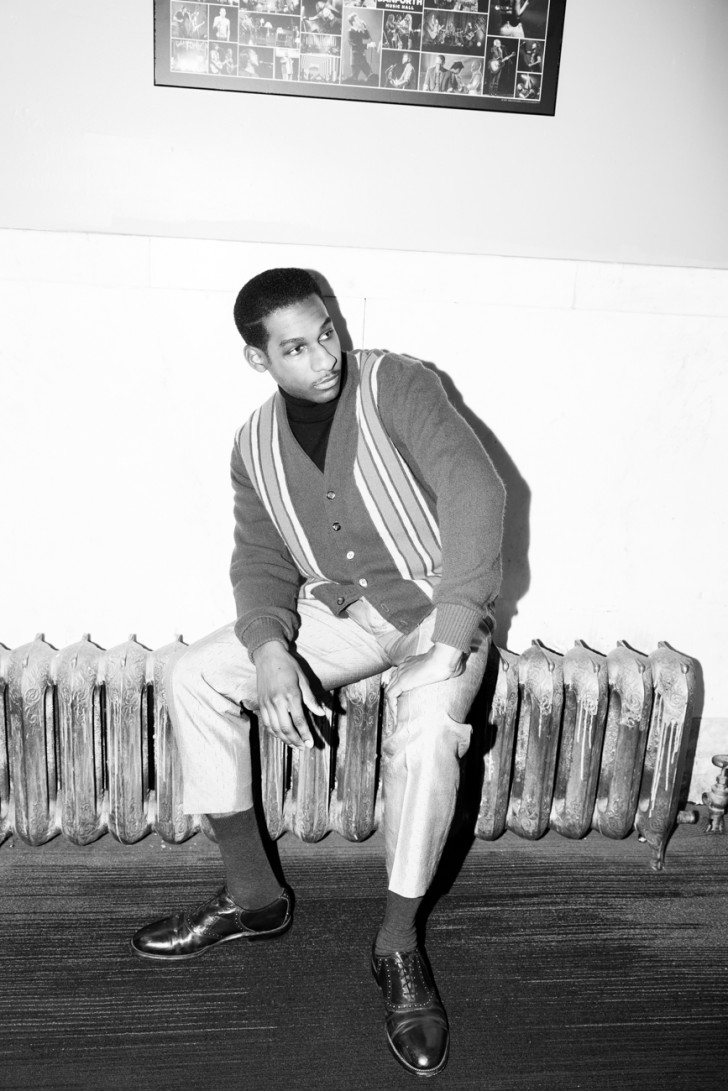 ON HIS PRE-SHOW RITUALS:

"My only routine is whiskey before a show. And eat bad food. Hamburgers. I like them medium well, and I might do salad on the side instead of French fries. But most of the time it’s like, ‘I gotta have French fries. It doesn’t work [without]. I got to.’ Before I get on the stage, I like to put myself in another world, so I might turn on some Migos or some Drake, just to get pumped up or get live before I get on the stage. Right now, I’ve really been on this kid, his name is Bryson Tiller and he has a record called T R A P S O U L. I’m addicted to it—just can’t stop listening to it."

ON HIS WORKOUT ROUTINE (KIND OF):

"My teacher would always [yell], ‘use your core! I don’t see it!’ I don’t really get time or the space to work out, but every now and then I’ll do a little elevé. [Demonstrates] [It works out] your calves. And sometimes I do some stretches, but that’s like when I get time. But I get a lot of working out when I’m on stage because it’s like [dances around]." 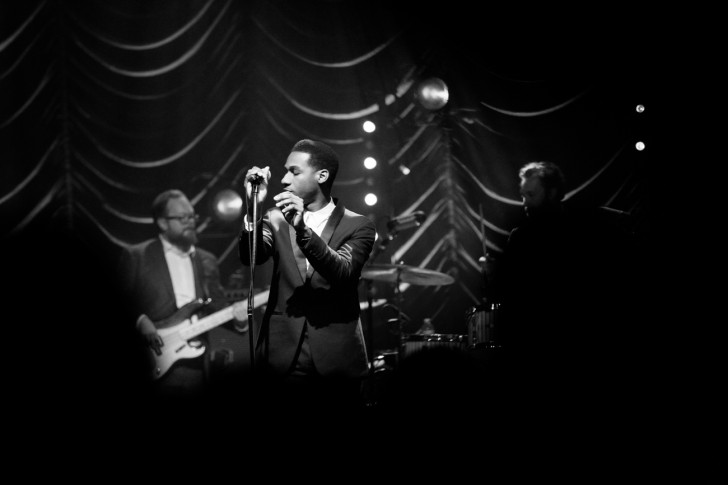 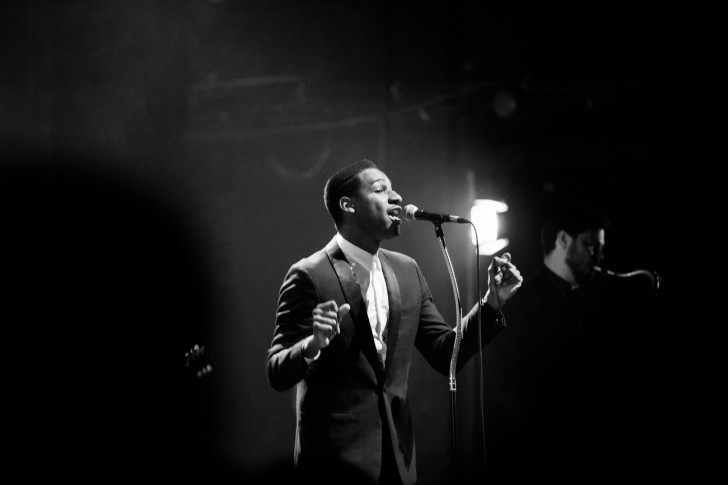 ON WHAT YOU'LL FIND INSIDE HIS CLOSET (AND HIS FAVORITE THINGS IN THERE, TOO):

"You’d find a lot of clothes that your grandfather probably wore in his day. It’s some suits. It’s so cluttered with like blankets and shoes. There’s a guitar in there. My favorite thing that I own… It’s actually these pants right here. I had a hat that was my favorite, but somebody stole it at the airport.

It’s a fight between these pants and my jacket—one of my blazers. But these pants, they’re so different from all my other pants. They look like somebody’s curtains. These are like straight-up 1950s trousers. I also have a blazer that’s one of my favorite blazers, and it belonged to a Compton preacher back in the ‘50s, and I’m so glad I have it. It’s one of my favorite blazers. I’ll never be able to find anything like it."

ON HIS ADVICE TO ASPIRING MUSICIANS:

"Always be content with what you do. You have to love what you do and have that love for music. I wouldn’t think about “making it”—because I never had that mindset, you know? I was just like, ‘I love getting out and playing music with friends.’ I love going on the street and pulling on a guitar, maybe on the subway, just stuff like that. I think it’s fun to be out and playing music. Just stay humble and always be looking out for other people. Put people before yourself."