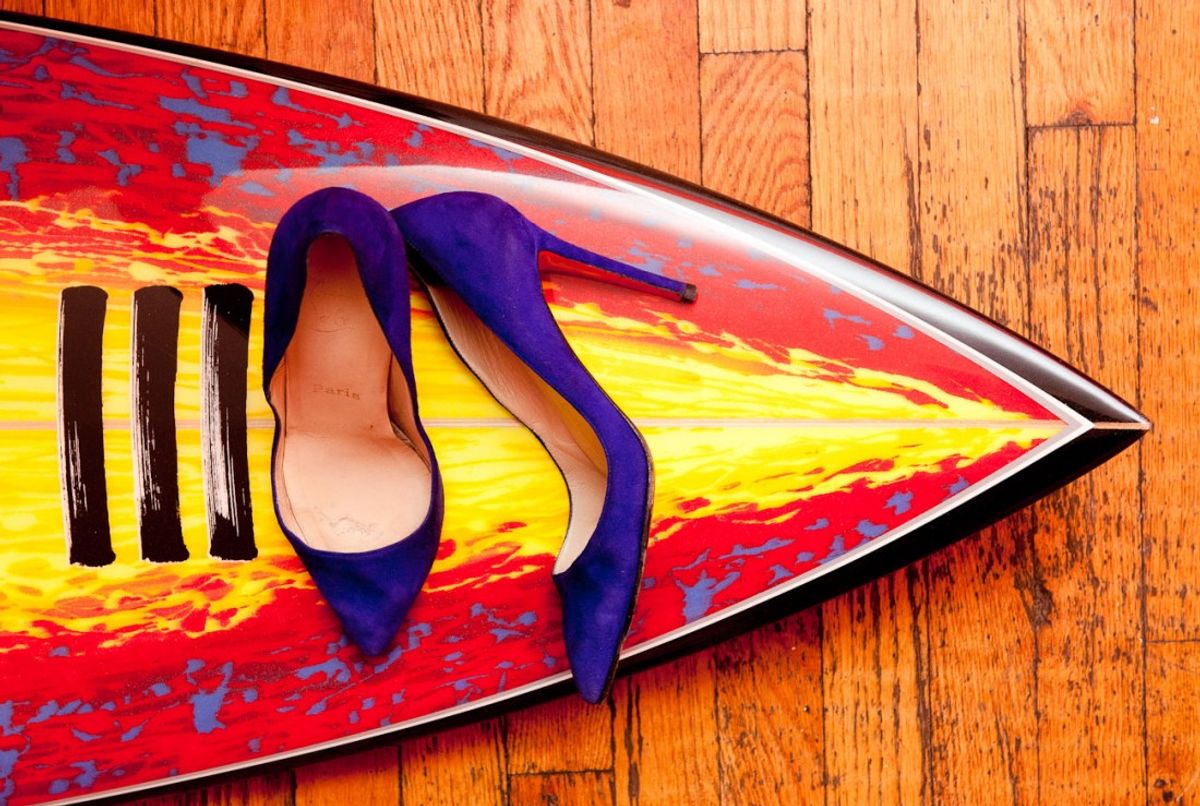 An Average Person vs. Surfset Fitness

One moderately-fit columnist attempts fitness fads you thought only Victoria's Secret models were cut out for.

Welcome to our new column, wherein we've tasked our new, averagely fit (and anonymous, for the sake of her dignity) columnist with attempting and attending the most Instagram-worthy fitness classes out there. First up? Surfset New York. As you can see, the potential for embarrassment is real. Here goes nothing.

I'm about to admit something huge, especially in today's day and age of Snapchatting every time you so much as enter the proximity of a gym: I’m not that fit. I mean, I like to think I possess some degree of fitness, but when it comes down to it, I’m really just... not. A psychiatrist once told me that some people are immune to endorphins, which at the time, I felt explained the better part of my athletic life. I mean, am I the only girl in the world who doesn’t love to be #betterforit?

Because as much as we all love to see a lithe model doing crunches, sometimes we need a little (by which I mean I substantial) dose of reality.

So enter me: your averagely, moderately fit person—meaning dessert is my favorite course, followed closely by cheese, which isn’t a course on this side of the pond, but if I had my way, it would be. I probably take too many cabs because my feet hurt, or it’s raining, or I’m a bit hungover. I have a FitBit and by have, I mean I got it for free when I opened my bank account. I don’t do yoga poses with my boyfriend on a dock, nor can I, but even if I could, I wouldn’t, because if I see one more AcroYoga post, the phone goes in the water.

And so when I heard the Cov was looking for a new, normal-person-who's-not-completely-intimidating-and-bench-pressing-their-boyfriend fitness writer I was all, "HELLO, I am just the person for breaking down the who’s who and the what’s what of the most-Instagrammed and most-hyped fitness classes for the layperson (a.k.a. if you also like cake and cheese)." Because as much as we all love to see a lithe model doing crunches, sometimes we need a little (by which I mean I substantial) dose of reality.

I first heard about Surfset from a friend of mine who was a rhythmic gymnast for, like, ever. Should your experiences with former rhythmic gymnasts be limited, let me fill you in (I know two). They are and will always be elastic bands with killer balance and very well-disguised strength, so everything they suggest with regards to fitness should be taken with several large ass grains of salt.  Alas, she sold me on the ambiance—“They play the Beach Boys and have waves in the background!” Done.

Surfset is a mainstay of the Class Pass variety, meaning you need to book early. I arrived and realized the class was on a fourth floor walk up.  Hello, literal full body workout.

The class is muchas intima. We're talking 15 people intimate—I’d guess 90% girls, 10% beefy dudes who clearly came to have fun and not to grunt and whatever else they'd normally do in a gym. This is not a class for someone who takes themselves too seriously. Cue the aforementioned Beach Boys and the beach montage sequences playing on the wall.

Teacher Aaron comes out and tells us that people don’t think Surfset is about cardio, only balance, but LOL, it actually is. LOL, Aaron! You know I love to sweat. Before anything, Aaron has us practice standing on our boards. He warns that many first timers will wobble for the first five minutes before getting accustomed to the board. I kid you not, it feels so weird. I’m not even sure what to compare my legs to other than strawberry Jello. Everyone is laughing because they are absolutely in the same boat. All 10% of the beefy dudes are wobbling, too. Surfset, the great equalizer. Surfset for President?

The next 40 minutes consists of surf sequences by the extremely narrative Aaron (did he major in Creative Writing, I wonder?) in which he tells you what’s up: “Paddle, paddle, paddle”, “Kick the shark!” The whole time, I’m doing these squats, planks, and poses (and also, kicking the shark), I’m dying. Yes, partly from exerting myself sans endorphins and avec sweat, but also because it’s just so funny.  And so is everyone else. Everyone is laughing. Even the beefy dudes. And that’s why this class is so popular. It’s a good time.

Though Surfset makes it very clear this is not a surf lesson, I do have anecdotal evidence of a friend who did Surfset and then travelled to Barbados a week later, went real time surfing and got up on her first try. Transferrable skills people. Hang ten.

Soreness 1-5? 3, but mainly in the abs after all the plank work and core engagement.

Was it sweaty? Dri-fit highly recommended.

— The Workout Class Virgin
More From the series Fitness