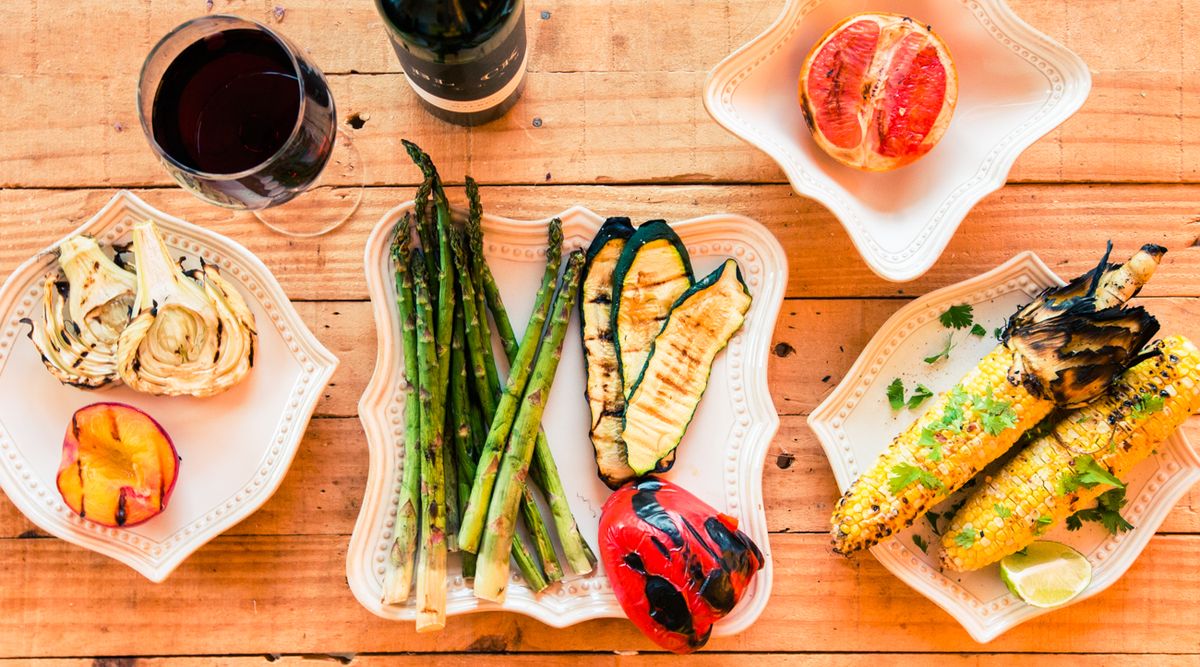 Your Healthy Summer BBQ is Here

We’re about to convince you to skip the racks of ribs in lieu of... vegetables. And not hate every minute of it.

Summer is upon us, and with that, the inevitable onslaught of BBQ. And booze. And other things that while way delicious and near-impossible to resist, are the precise opposite of things like green vegetables and Pilates; also known as things that are boring and sensible but that you know, deep down, are good for you.

As always, balance is the key; but it's a virtue difficult to impart when you're two grapefruit Palomas deep and it's barely past noon. And so in the interest of putting things in our bodies that don't make us feel like total, utter garbage, we sliced up a few unexpected fruits and veggies — think peaches, pineapple, Italian eggplants (they’re almost emoji-sized), artichokes, and more — and threw them on the grill. We mean, how else could we convince you to ditch your go-to bolognese for a sweet and refreshing charred fennel and peach salad? We’re backing away from the ribs and potato salad (okay, we're reaching for one helping, but we digress) in favor of corn on the cobb and other BBQ staples (and new faves). Do the same, bring to all of your summer barbeques, and avoid the usual salt hangover that usually follows. Easy, right?

ASPARAGUS
You hardly have to do anything here, guys. Just throw it on the hot grill. If you’re feeling extra fancy, brush it with some olive oil or butter and crack pepper on top.

ARTICHOKE
If you’re like us, chances are if artichoke is on the menu, you’re ordering it; doing it at home can be just as delicious. Just cut in half, trim the top off and steam for 20 minutes pre-grill. Brush with a teeny bit of EVOO and leave on the barbie for 3 minutes. Finish off with some fresh grated parmesan and minced rosemary. YUM.

EGGPLANT
Okay, this shit is so versatile. Do what you like with it. As in, cut it in cubes and skewer it; slice lengthwise with some olive oil, or into little disks. OR leave it whole, char the shit out of it, blend with garlic, mayo, parsley, pepper and salt, and you’ve got yourself some baba ganoush. It’s really all up to you!

ZUCCHINI
This is another one of those super-versatile veggies. Get creative, friends. You really can’t go wrong.

FENNEL
As soon as fennel hits the grill it is near damn perfection. No seriously, be ready to never eat anything again. We like to drizzle with some olive oil and sprinkle some feta.

PEPPERS
We like eating this straight up grilled. Cut in half, remove the seeds and stems and throw on the grill. Guys, this ish is simple….and delicious.

CORN
CORN = everything. It’s all about what you do after you’ve grilled. Brush on some butter (or if you’re really trying to be healthy, skip), sprinkle with chili powder, some cotija cheese, fresh cilantro and squeeze some lime on top.

PEACHES
This is life changing. Slice peaches in half (they should still be a bit firm, or it’ll turn to mush when heated. Yikes.), and place on the grates. You can slice into thinner wedges, ribbon some fresh fennel (hope you saved some), squeeze some fresh lime juice and you’ve got yourself a pretty kick ass salad if you ask us.

GRAPEFRUIT
If you couldn’t tell, we’re all about the quick and easy. Cut in half and grill. Eat for breakfast or dessert. No judgment.

PINEAPPLE
Last but most certainly not least: pineapple. No matter how you grill this it’ll be delicious. We’ve been known to consume an entire one in a sitting. Try it and you’ll understand why.