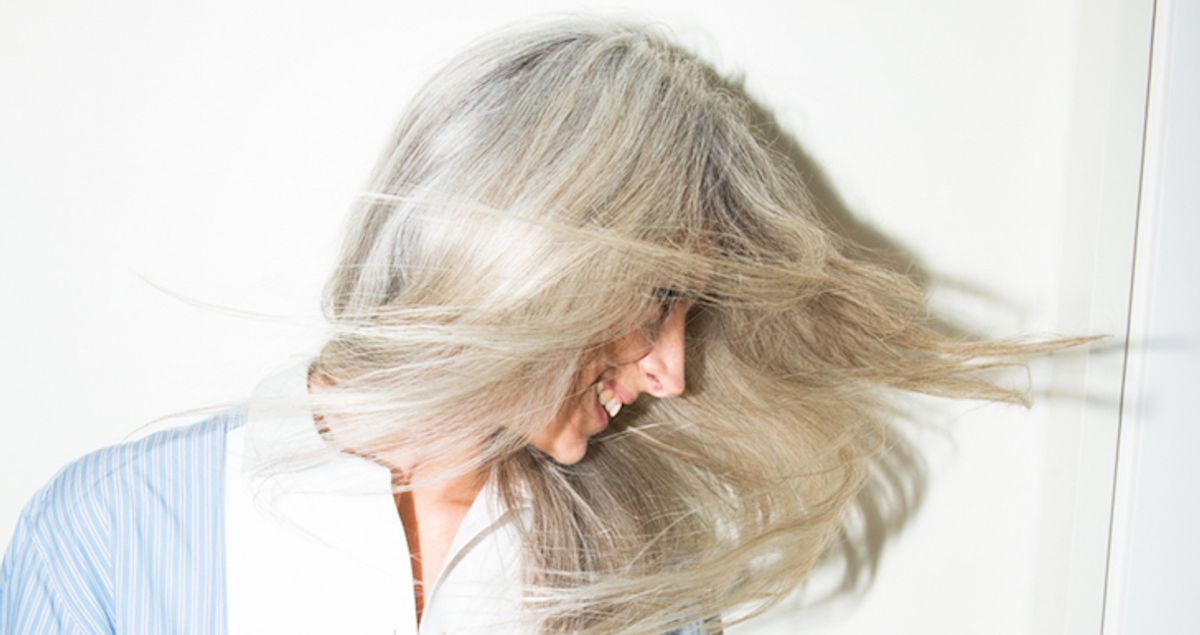 After Caroline Issa & Sarah Harris explain, you might be tempted to break up with your colorist for good.

It started the same way it always does—while looking in the mirror, minding your own business, you spot it. Defiantly sprouting out of your scalp, your first ever grey hair. Now what?

You could elude the old wives tale and pluck the stray hair out. You could hastily cover it up with a bought-in-the-middle-of-the-night box dye and face a thorough interrogation during your next sit-down with your colorist. Or you could ignore it—y'know, for now. Going grey in your mid-twenties presents an entirely different type of quandary than that of say, eye cream, or Botox, or any other beauty treatment we undergo in an attempt to avoid mortality. Just sayin', grey hair has actually come full circle and become stylish—so much so that salon goers have actually been requesting and paying for said shade for more than a minute now. So where do you go when you begin growing them on your own?

If you're Vogue's Sarah Harris or Tank and Because Magazine's Caroline Issa (read: an insouciantly cool yet demure, have-your-sh*t-together type), you make like Frozen and let it go. Just imagine how badass you'll sound when, upon being prompted to share what lead you to grow 'em out, you answer that you, "would much rather learn to deal with them and spend those hours going to the gym or seeing a new exhibition," à la Issa. Either way, you can't deny these two provide some seriously compelling arguments for embracing the grey.

"I WAS ABOUT 16 YEARS OLD when I first started noticing them, and I was mortified! But it happened slowly, no one really noticed until my 20s.

I used to have fun dying my hair with those wash-in, wash-out dyes with my girlfriends on a Saturday, but that was never in an attempt to hide the few greys that I had; it was more about the fact that that was the thing to do on a Saturday afternoon, shop and then dye our hair. I think I have embraced it by default! I'm not saying that I will never dye it, but I remember watching my mother dye her grey for several years, and it's a big commitment, going to the salon every four weeks. It doesn't bother me so much that it drives me to the salon—but who knows, one day it might! I think as I age, I might want to color it—I'm 35 but grey hair does make you look older.

It happened very gradually and I think I'm pretty lucky, because it's pretty evenly spread. I don't use any product on it. I use all [sorts of] shampoo and conditioners, although one of my favorites is the Philip Kingsley Pure Silver shampoo and conditioner for silver hair, which you can buy at Net-a-Porter. I always wash it at night, towel-dry it, and then go to bed with it wet, sometimes coiled into a bun. It only ever gets brushed at the salon when I go for a trim or blow-dry. I never brush it otherwise.

Luckily the texture hasn't changed, which I'm thankful for! I think that's the hardest thing to deal with, much more than the grey, is that coarse grey texture. My mum's silver is soft too, so I'm hoping mine will be as well when I grow older. The downfalls of this hair color is that when you're tired, you look REALLY tired. It can drain the complexion… it looks its best when it's blow-dried.

It is, without a doubt, the thing that I get the most comments about. I'm probably asked about it every other day. From strangers, the first thing they ask is, 'Who is your colorist?' Most don't believe me when I tell them it isn't dyed."

"I NOTICED MY FIRST GREYS AT AROUND 30—at that point, they were few and far between, and luckily hidden under the top layer of my hair, so you really had to search to see them. Given my dad went full grey at quite a young age, I wasn't surprised and they were well enough disguised I never did anything about them!

To be honest, the biggest reason I haven't covered up my greys has to do with time and productivity—I just don't have the time to go and sit and dye them professionally with the maintenance and upkeep it would require. I would much rather learn to deal with them and spend those hours going to the gym or seeing a new exhibition. It also makes me feel a bit rebellious, as I have never dyed my hair either, so it gives me a new color way to play with... said with irony. But I like to say, never say never, so play with it either way, making them more pronounced or cover them up one day.

The biggest issue is how wiry the greys are, so you tend to see me with my hair slicked back or blown dry straight into submission."

Meet the Black-Owned Hair-Care Startups Shaking Up the Industry